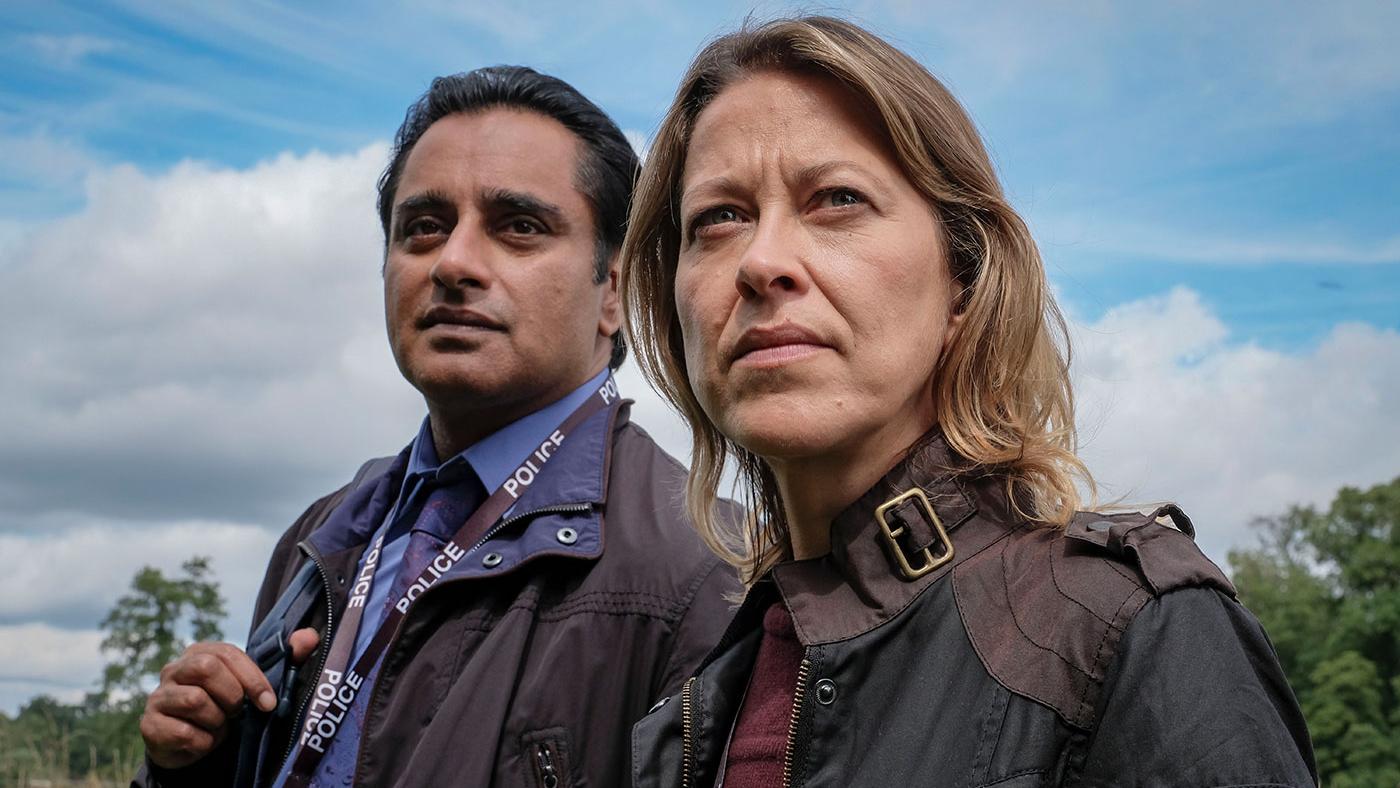 Cassie and Sunny investigate another cold case when a suitcase containing a body is dredged up from a river. Photo: John Rogers/Mainstreet Pictures

Unforgotten is available to stream. Read our recaps of the previous season’s finale and the next episode in this season.

The calm of a lovely picnic spot on the River Lea is broken by the roar of a dredge. Its bucket strikes on something, scrapes it up, lifts it out of the water. Two workers pull the moldering object from the dredge, discerning a zippered suitcase. They open it, releasing a vile stench. Inside is an adult human skeleton.

It’s difficult to say how old the skeleton is; the suitcase has preserved it fairly well. A wristwatch may provide a clue. And the cause of death? The blade of what may be a kitchen knife is found in the chest, so most likely stabbing.

Some initials and two dates are found inscribed on the inside plate of the watch: a watchmaker’s record of repairs. With the help of the watchmakers’ guild, detectives Cassie and Sunny track down the initials. By matching up payment records to the dates and then cross-checking that with missing person reports, they discover their skeleton’s identity: David Walker, last seen May 8, 1990.

David had a wife and a five year-old son when he disappeared, so Cassie and Sunny go to inform his wife that his body has finally been found. Tessa Nixon, née Walker, is herself a detective. She became one around six months after David disappeared, mostly because she was impressed by the officers who handled his case but also because she needed money to support herself and her son, Jason. She remarried eight years ago; her husband Paul has his own child, a teenaged daughter.

Tessa fills in David’s background. He ran a business in clubs, often working long hours and traveling, and was well-connected in charities and galas. He suffered from depression, so Tessa eventually assumed he had killed himself. He was last seen at a pub.

It’s not much to go on, but a pager found with David’s corpse provides more clues. Its data chip is salvageable, and once it’s placed in a functioning pager it reveals some of the last messages, albeit with some gaps. The detectives eventually puzzle out that one message is an address in King’s Cross for what used to be a flat. The landlord doesn’t remember the specific woman who was renting it (whose name the detectives have from records), but does recall that most of his tenants in that building at the time were prostitutes. 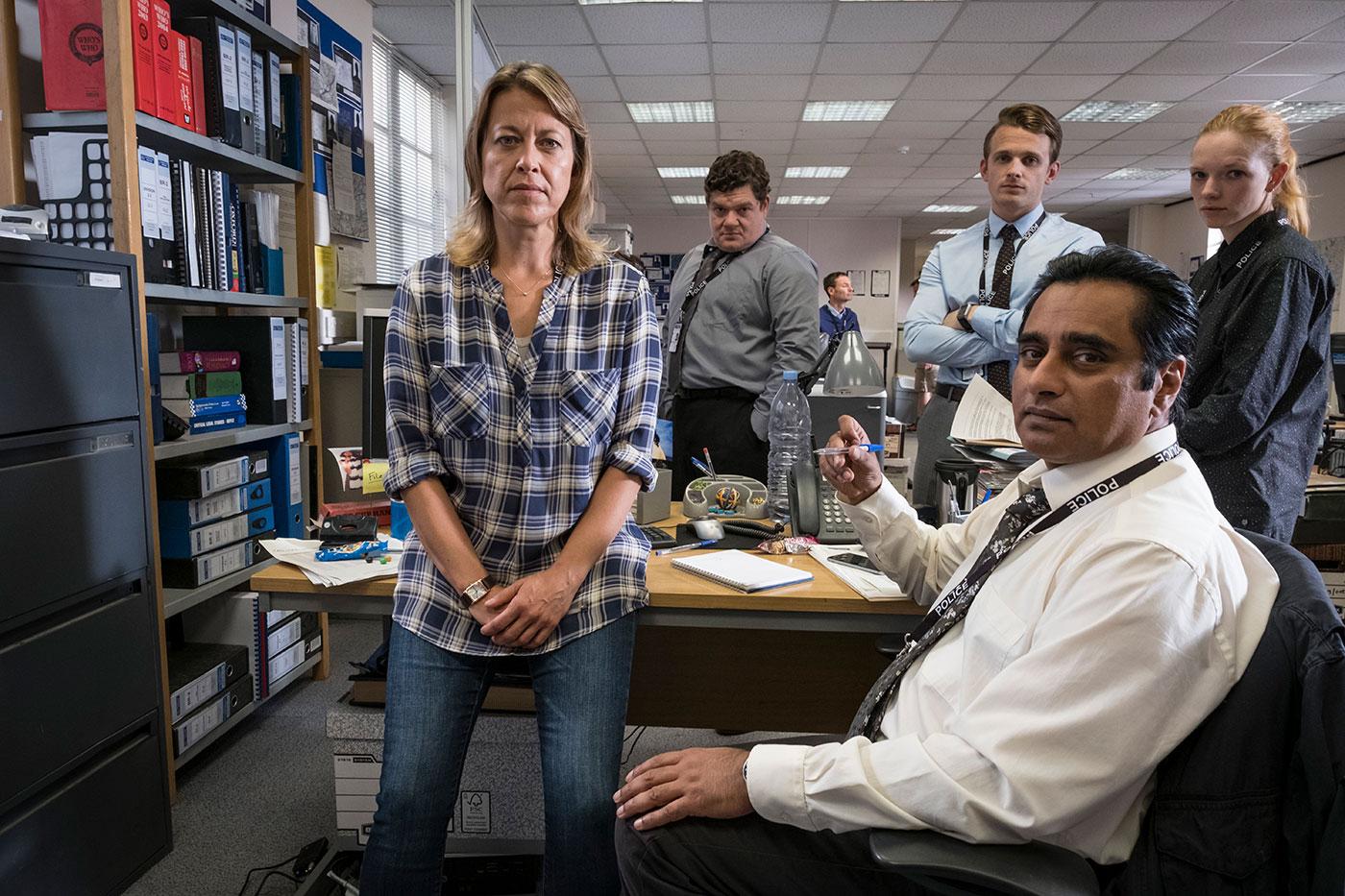 With the help of David's pager and some overlooked coincidences in his appointment book, the detectives begin to find people who may have been connected to David. Photo: John Rogers/Mainstreet Pictures

So the detectives look at arrests of prostitutes around King’s Cross at the time and discover that their woman, Sara, was arrested several times with a Samira Khan, who is still a sex worker. They track Samira down. She explains that Sara left sex work in early 1990 but that they continued to correspond for a few years. By 1995, Sara had gotten an advanced degree, married, and was living in Salisbury. Her married name is Mahmoud.

Sara Mahmoud is now a high school English teacher with higher goals. She’s interviewing to become principal of a school for troubled children, and her contention that she understands the school’s kids because she used to be just like them gets her a second interview. She’s also an unapologetic agitator for an equal prayer space for women at her mosque.

When Cassie and Sunny question Sara, she is distraught that anyone knows about her past as a prostitute – it was a dark time. She did it for less than a year, and claims not to remember David, though it’s entirely possible he could have been a client. She does have an alibi: she was traveling abroad at the time of his disappearance.

Colin Osborne also says he doesn’t remember David, but the phone number for a posh flat he rented at the time of David’s disappearance was listed in David’s desk appointments, as was a nearby meeting with a Colin. (The original missing person investigation failed to follow up on this coincidence.) Colin tells Cassie and Sunny that he was a banker at the time, but, drained by the business’s cutthroat nature, he left to become a lawyer in early 1990. He now does a lot of pro bono work for struggling teens and other worthy clients. Sounds like he’s trying to atone for something.

Colin’s husband does allude to old problems with “temper issues.” The couple is in the final stages of adopting a young girl, Flo. While they’re at the grocery store with her, a bigoted man whispers in Colin’s ear that he hopes they all get AIDS and die. Furious, Colin keys the man’s car.

Unfortunately, Tyler, the partner of Flo’s birth mother, has been following Colin and sees this misdemeanor. He uses it to blackmail Colin into speaking with him. All he wants is ₤5,000 and then he’ll disappear. Colin and his husband don’t want to mess up the adoption or Colin’s career, so they decide to pay.

Problems are also brewing for other characters. Marion, a nurse, feuds with her sister Elsie at their mother’s birthday party, then turns around and accuses her supportive husband Tony of reporting her for speaking with one of her young cancer patients on her personal phone. Jason, David’s son, has believed for 26 years that his father left him because he didn’t love him, so he’s taking the news of his murder badly – he even rants about his feelings to Paul’s daughter, frightening her. Cassie’s father is hiding something from her: she’s found a credit card charge for a ticket to Winchester as well as the ticket, but he pleads ignorance.

And there’s a development in David’s case. The detectives have spoken with his closest friend. Turns out David also had a drinking problem. That and his depression probably stemmed from abuse that he suffered as a child at the hands of a teacher. Before he disappeared he had been considering reporting the abuse, or – dangerously – confronting the abuser.