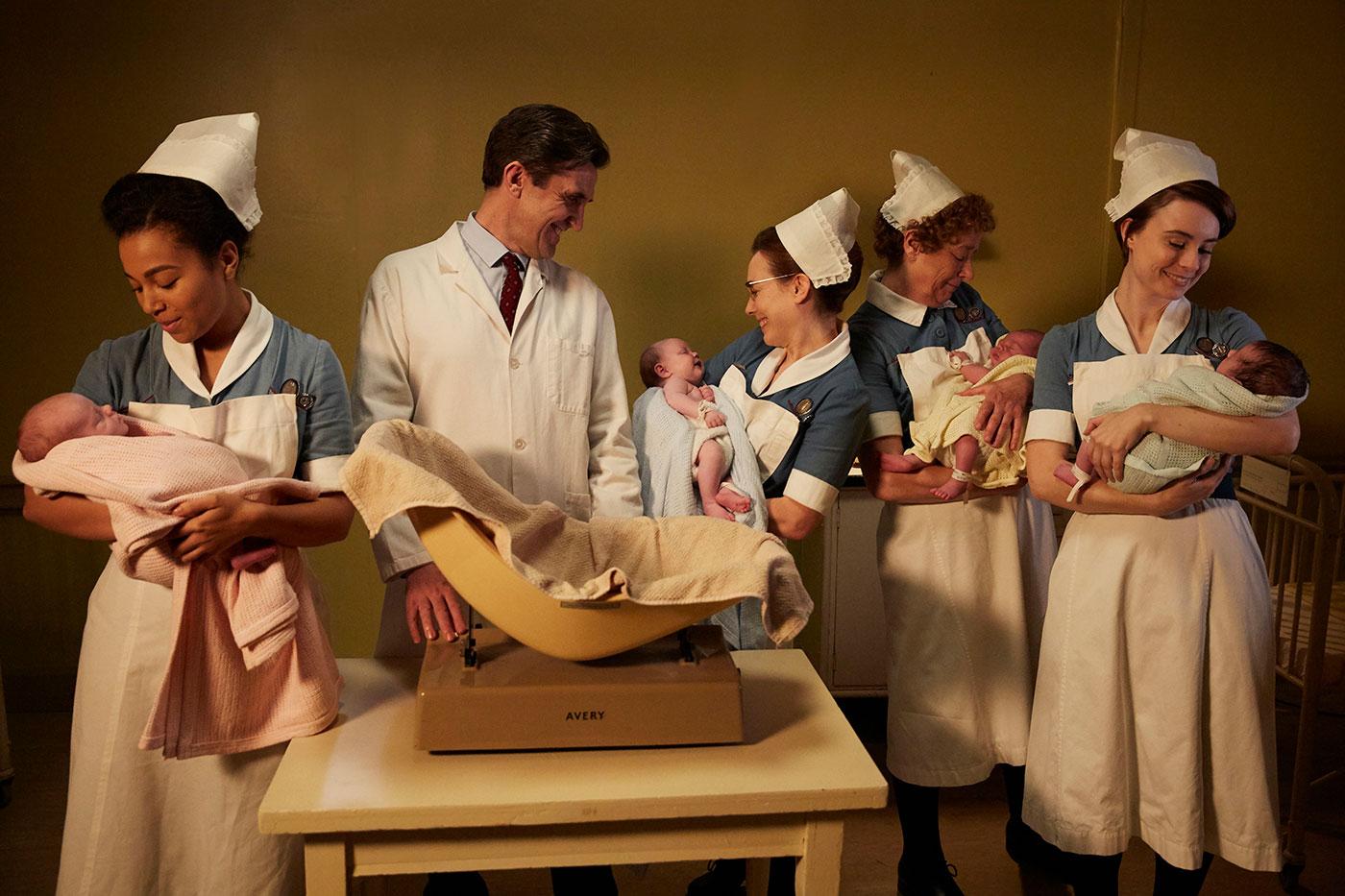 When another maternity clinic closes, the Nonnatans are swamped with mothers and babies. Photo: Neal Street Productions

Recap the previous episode of Call the Midwife.

“We’ve got work to do, haven’t we?” Phyllis says to Lucille as the younger nurse consoles the older. “The world doesn’t stop.”

No it doesn’t: even though the Nonnatans have lost a beloved friend with the death of Barbara, they cannot take a break to grieve. There are pregnant mothers who need tending to; more than usual, since another maternity clinic has closed and referred all of its patients to the Nonnatans. This means extra beds must be crammed into the clinic, double the linens have to be ordered, and it’s all hands on deck.

But the bustle can only do so much to distract the midwives from their grief. Sister Julienne weeps as she erases Barbara’s name from the call board; Sister Monica Joan becomes even more upset for losing a diversion when the TV breaks; Nurse Crane is especially disconsolate and has her pain compounded by a sudden back problem that prevents easy movement. Tom, utterly crushed, goes away with his parents for a week. But, as the poem Phyllis reads at the funeral implores, they all must “turn again to life.” 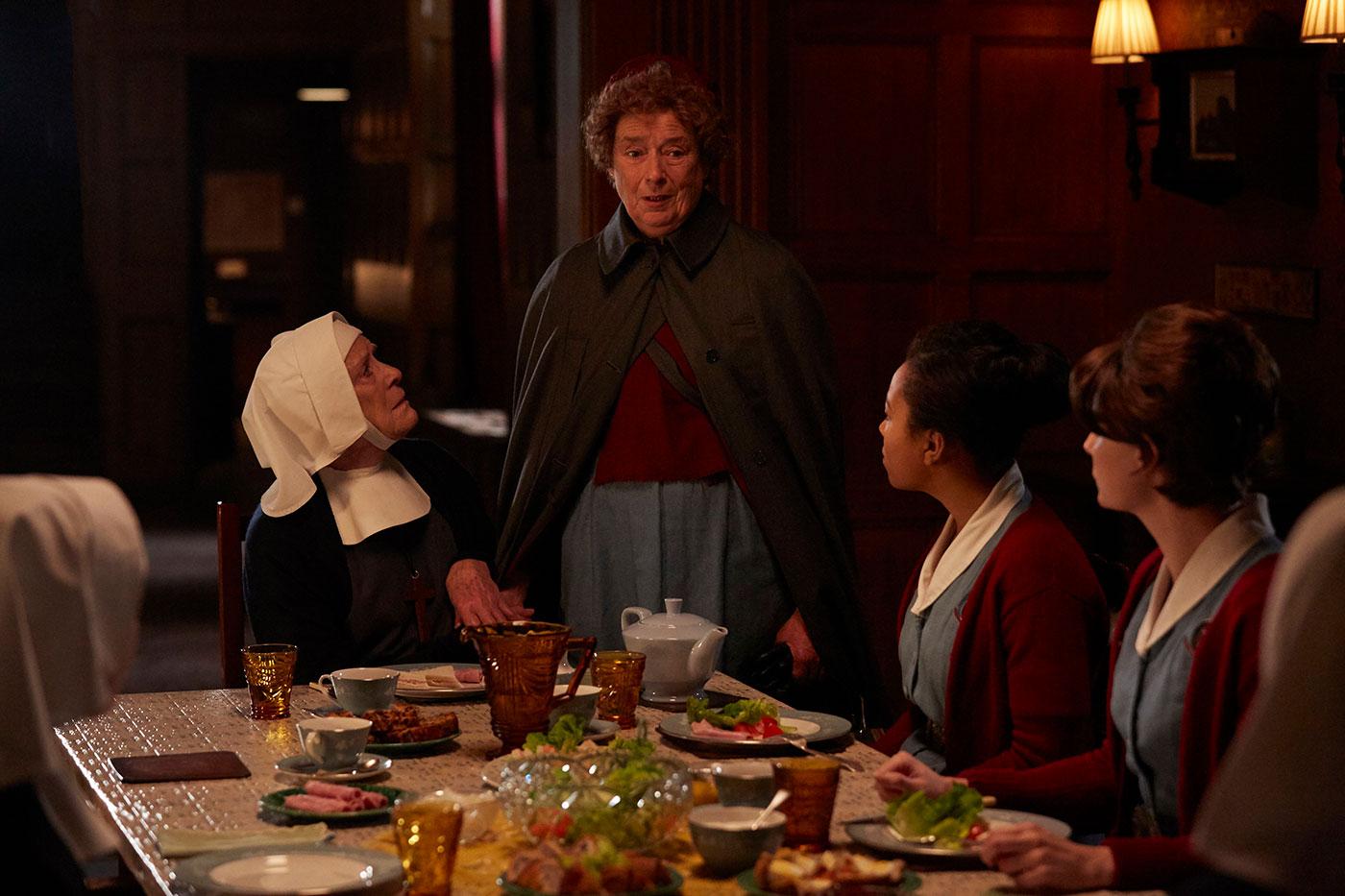 Nurse Crane takes Barbara's death harder than most, and her pain is compounded by a twisted back, but she's determined to carry on. Photo: Neal Street Productions

In the absence of the TV, Monica Joan goes to the cinema to get her news (she has to find out who in the world needs prayer). While there, she is convinced by the projectionist to stay for the main film – and loves it. The next day, her prayers for chapel are full of references to pop culture. Valerie, who has asked to observe chapel to see how the sisters’ faith is helping them cope with their grief, barely contains her laughter.

Sister Julienne is less amused, and bans Monica Joan from going back to the cinema. When Monica Joan also laments that her birthday will probably go uncelebrated, the head sister confirms it, tamping down further joy – this is a time for grief, not levity. But Valerie, Winifred, and Lucille decide to plan a party anyway.

Lucille also meets the projectionist who befriended Monica Joan at the cinema. The widower’s pregnant daughter Olive is living with him because her husband was cheating on her. But Olive isn’t entirely comfortable there – her father’s neighbor Donald, whom she calls Uncle, is constantly stopping by. While Lucille is visiting for a check-up, Donald walks in, confused and pantsless, then wanders outside while Olive berates him. After calming Olive down, Lucille reports Donald missing to the police. 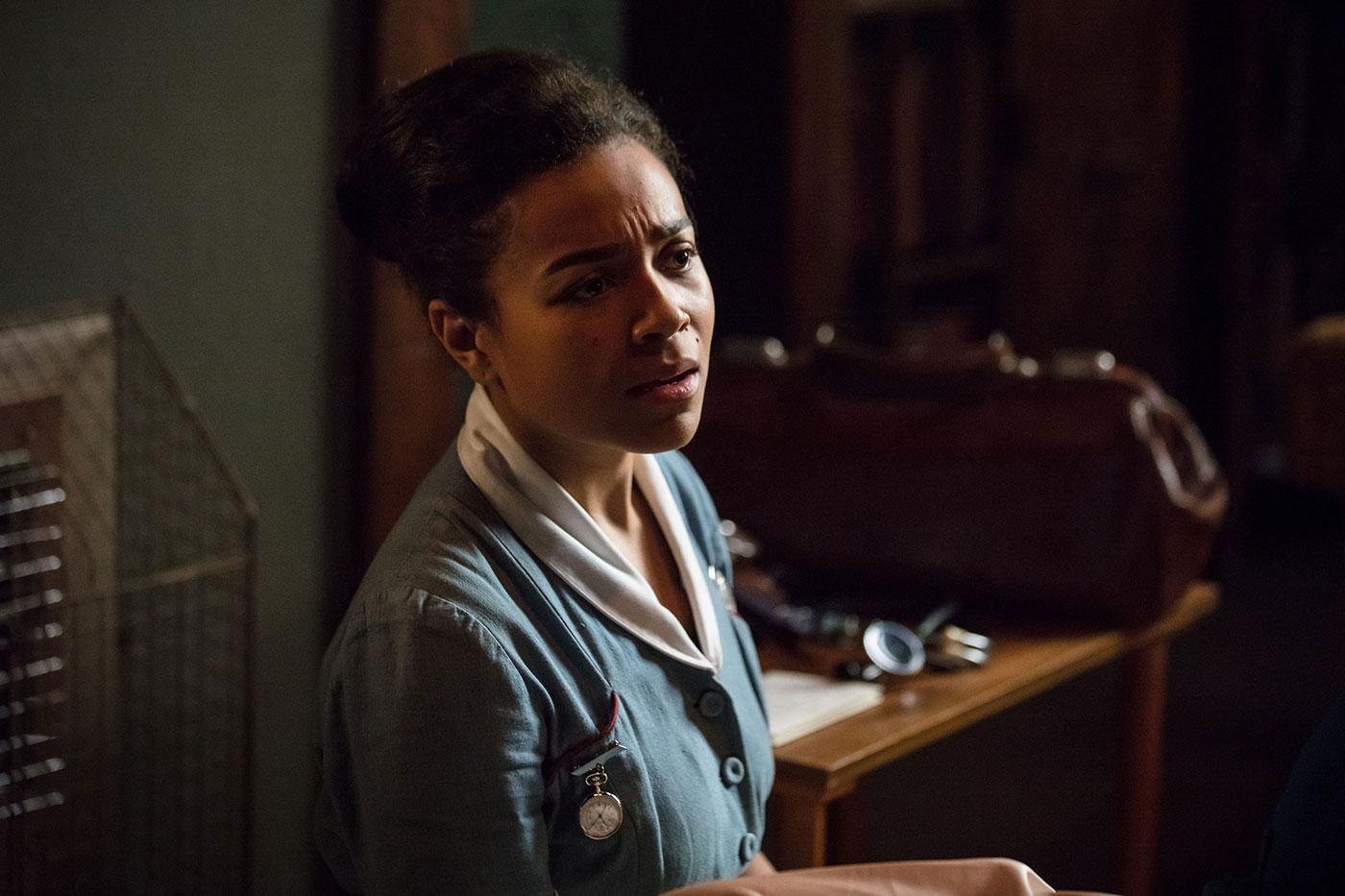 Lucille is caring for a woman who left her cheating husband to live with her father, but the situation is stressful. Photo: Neal Street Productions

Once the police find Donald, they call Dr. Turner to examine him, while Olive’s father Stan comes to comfort him. Donald has previously been arrested for “gross indecency” – homosexuality was criminalized in Britain until 1967. When Donald becomes upset during Dr. Turner’s examination of him – he has dementia – and Stan warmly comforts him, it’s evident that Donald and Stan’s relationship is closer than that of neighbors.

Olive may have suspected this, but refuses to accept it when Stan wants to move Donald in so that he can take care of him. She goes to stay at the maternity clinic – she’s due in a few days anyway.

Stan arrives while Olive is in labor, and she tells him that she feels alone and unloved – her husband cheated on her, her mother is dead, her father has a lover to distract him. Stan is then shuttled out of the room for the rest of the birth. When a daughter is finally born, Stan and Donald come in and Donald tells Olive that he loves her. Olive, glowing after the birth, embraces her unconventional family. 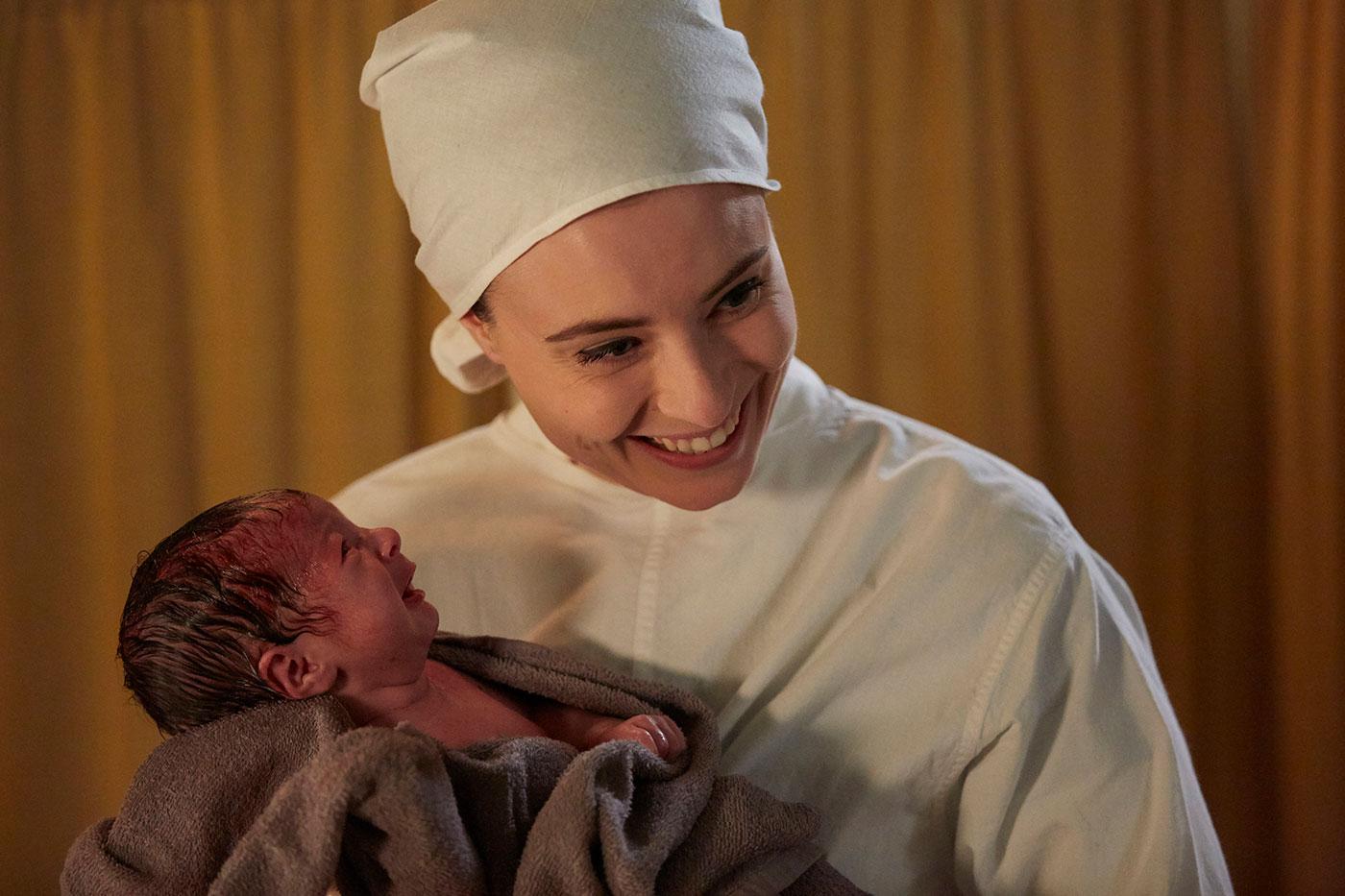 Olive isn't the only to give birth at the clinic – three other mothers also go into labor at the same time. Photo: Neal Street Productions

There’s a lot of love in the clinic right now. In addition to Olive, three other women were in labor at the same time. Despite her bad back, Nurse Crane is forced to step in and guide a young, cheeky girl through her labor. Neither is happy about it; during a previous check-up, the girl found Nurse Crane stern and old, and the dislike was mutual. But Nurse Crane proves a caring companion, and by the end of the birth the two are exchanging smiles. In a beautiful, unknowing coincidence, the girl  who is giving up her child for adoption – decides to name her daughter Barbara. Nurse Crane is touched – and her back seems to have loosened up.

All this good cheer is suddenly shattered by the news that JFK has been shot. Everyone descends back into solemnity. But Monica Joan gives a rousing speech. They have mourned too much; they cannot grieve their whole lives. “We are not what we have lost,” she says.

While Monica Joan inspires the midwives, Reggie helps comfort Tom. The curate has returned from his week off and is dangerously closed off. He tries to donate Barbara’s clothes to Nonnatus, but Sister Winifred refuses to let him. It’s too soon. Reggie begins to visit Tom both at home and at Barbara’s grave, and buys him a touching present: a tin carousel, just like the one at Tom and Barbara’s wedding, to place on Barbara’s grave.

Tom and Reggie head over to Sister Monica Joan’s birthday celebration, for which the midwives have assembled a slideshow of photos and film, projected by Stan. As Tom walks in, photos of Barbara, along with all the other midwives, appear on screen. They’re all smiling. 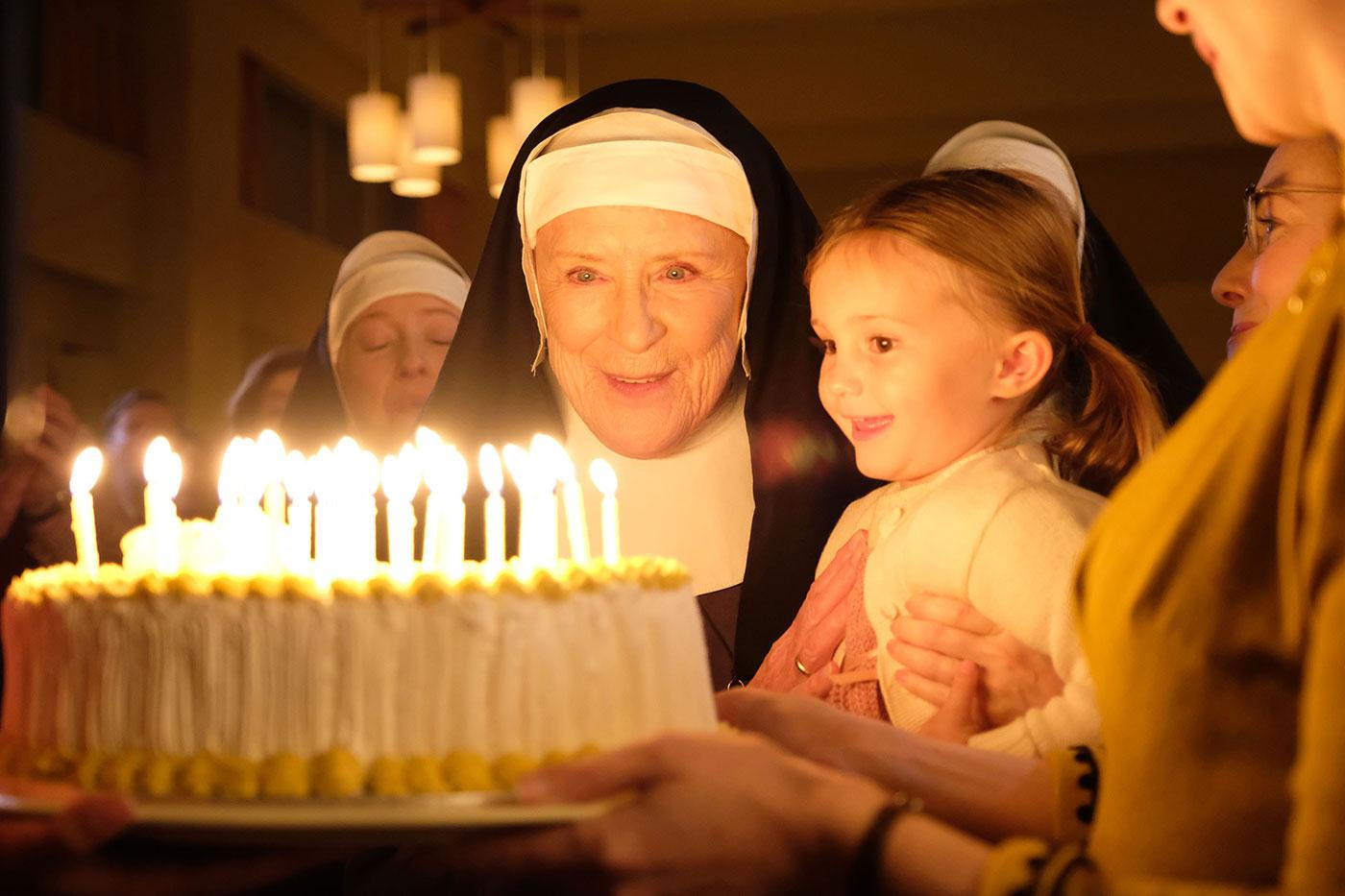 Sister Monica Joan feared her birthday would go uncelebrated because of everyone's grief, but Valerie and the other nurses plan a party to bring some cheer. Photo: Neal Street Productions