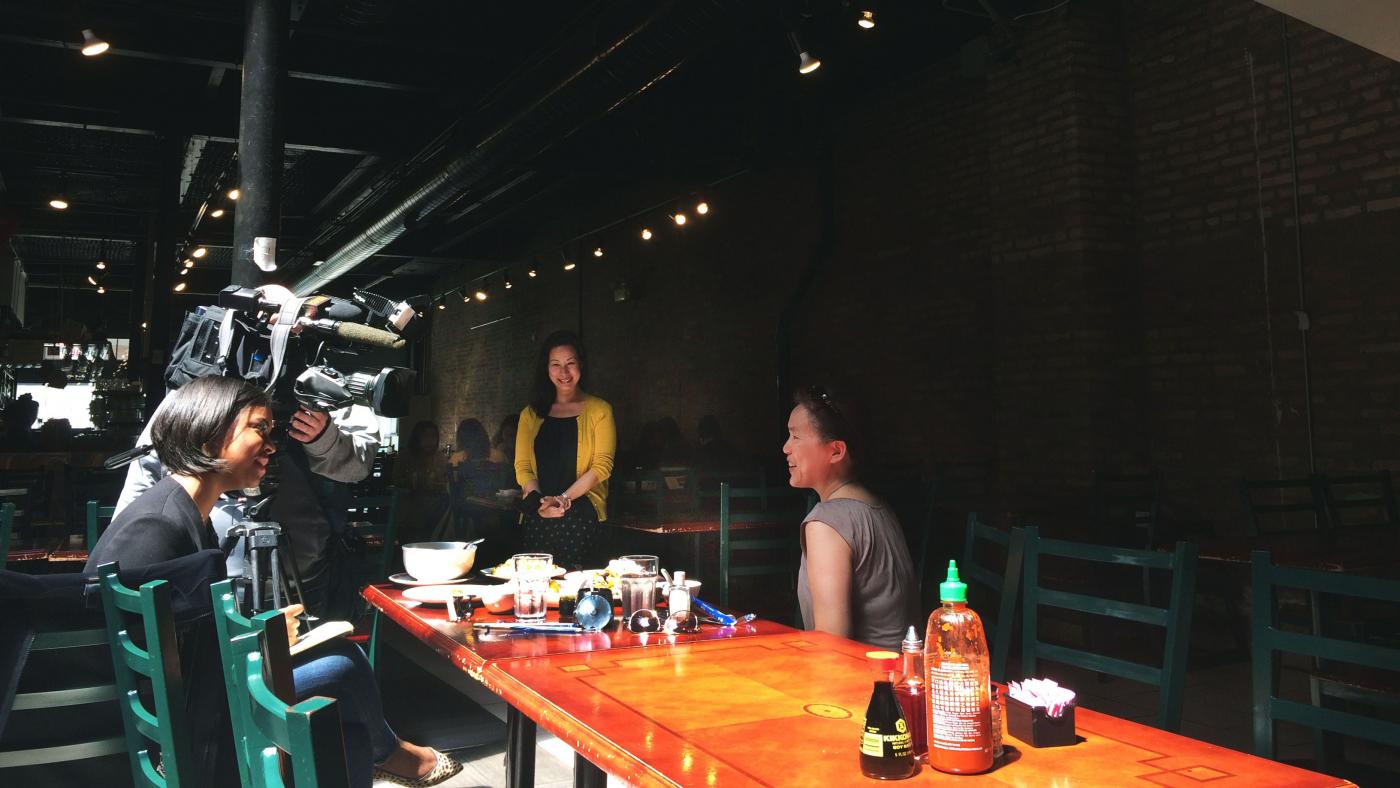 Brandis speaks to two customers at Sun Wah BBQ. Her love of food means she jumps at the chance to cover a story like that at Sun Wah

A rectangular cleaver slides into a roasted duck glistening with fat, slicing off a tender morsel. Brandis Friedman leans over a scuffed rosewood table, arm outstretched, and snaps some photos of the knife-work with her phone. She watches the waitress separate a few more chunks from the duck, then wanders off to chat with some customers at Sun Wah BBQ, leaving photographer Michael Cox to continue filming the culinary ritual.

Sun Wah has won an America’s Classics Award from the James Beard Foundation, and Brandis and Michael are putting together a segment on the restaurant for Chicago Tonight. It’s a story Brandis is eager to cover, given that it’s about one of her favorite parts of life: food. Eating out at the hottest restaurants, along with dancing and shopping, are Brandis’s main hobbies, the things she loves but doesn’t get to do as often as she’d like. So the chance to cover Sun Wah isn’t to be missed, a rare opportunity to indulge in her extracurricular interests while on the job.

While Michael focuses his tripod-mounted camera on the duck carving, Brandis approaches a pair of amiable women at another table. She introduces herself and begins asking them about themselves, why they’re at Sun Wah, and how they like the food, all from a low squat so that she’s closer to their seated eye level.

As befits a television reporter, Brandis is a talented conversationalist, able to quickly make her subject feel comfortable and chatty, all without the interjections typical of most people’s spoken interactions. When filming and recording audio, the “mhms,” “rights,” and chuckles that most people unconsciously use to signal active listening interrupt the flow of an answer. For Brandis, those verbal hiccups are replaced by understanding nods, raised eyebrows, encouraging smiles, and widened eyes. 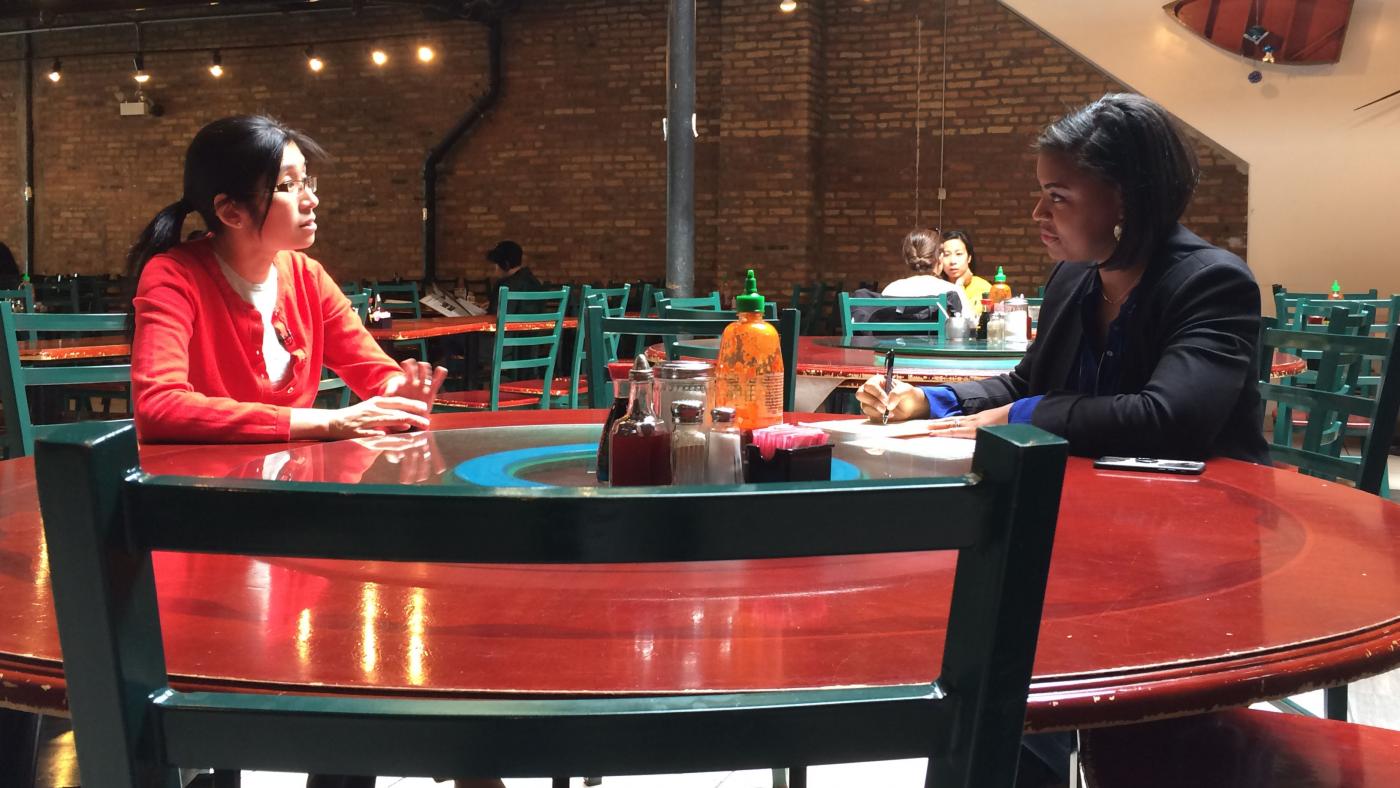 Rather than use extensive notes, she relies on her natural conversational instincts to guide an interview. And in the case of a segment like the one about Sun Wah, where she’s both reporter and producer, she’s also constantly planning out her story while speaking: I need her to say more about this topic; that would be a perfect ending; that’s a great soundbite.

Like her interest in dance, Brandis’s love of food came from her childhood. An only child, she often went out to eat with her mother, who, as an obstetrician-gynecologist, didn’t have much time to cook even though she was a competent chef. Brandis fondly remembers those meals out, but she never learned to cook from her mother – “which is why I married a man who cooks,” she jokes.

Her mother is also the reason she danced. When Brandis was around six years old, her mother signed her up for dance lessons and piano. While the latter did not go well – “You have to sit still and practice! I need to be dancing, which involves not sitting still.” – dancing became a lifelong passion. She even briefly considered becoming a professional dancer, until she saw The Pelican Brief in late high school. Based on a John Grisham thriller, the film stars Denzel Washington as a reporter for a fictional version of the Washington Post. Entranced by Washington’s character, dazzled by the locations – it takes place in some of her favorite cities, New Orleans, Washington, D.C., and New York – and intrigued by a career where it was her job to ask questions and continuously learn, Brandis decided to become a journalist instead. 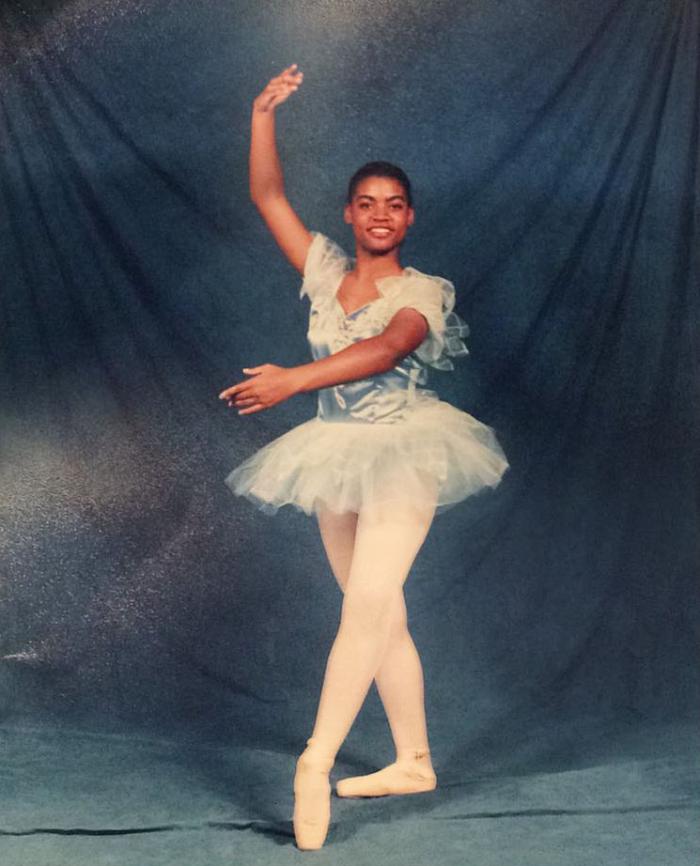 Brandis in her senior year of high school. She considered becoming a professional dancer before deciding on journalism She did continue to dance on the side until she had a son. Now, with limited free time, she has to be content with watching the Joffrey Ballet perform or interviewing the occasional star like Misty Copeland.

“I will dance while I shop, though,” she jokes. And fashion is another of her loves. While living in Washington, D.C., she wrote a blog called “The Thrill of the Buy,” that was about the “art of shopping,” she says: advice, rules, deals. When she first moved to Chicago and was working as a freelance reporter for WBBM, she also wrote beauty and lifestyle pieces for two magazines, Sophisticate’s Black Hair & Style Guide and Sophisticate’s Hairstyle Guide.

And while being on TV lets her flaunt her style, it also constrains her sartorial choices. Certain patterns, such as houndstooth or stripes, look odd onscreen; white can be blinding; clothes have to be rather basic so as not to distract. She keeps a back-up dress and six blazers hanging in her office in order to have options.

At Sun Wah, her interest in clothing provides a topic for some more rapport-building small talk, when she asks the general manager Kelly Cheng what she’ll be wearing to the James Beard Awards gala, at the Lyric Opera of Chicago. Brandis smiles, nods, listens, and encourages, engaging her subject even when off-camera. Then she turns to the rosewood table, grabs a bowl of duck soup, and digs in.