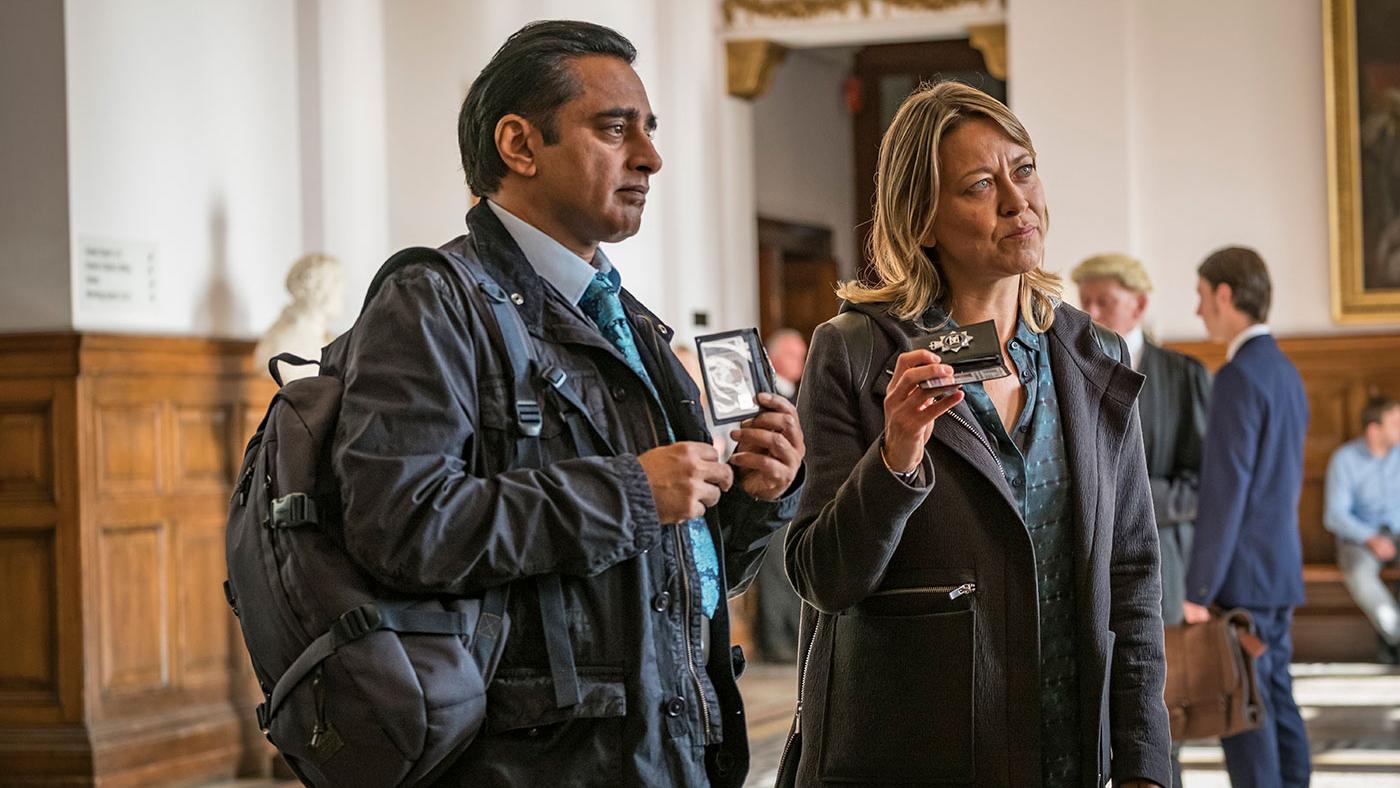 Sunny and Cassie's prime suspects produce watertight alibis, and the detectives are stymied at every turn. Photo: John Rogers/Mainstreet Pictures

Unforgotten is available to stream. Read our recap of the previous episode and the first episode of the next season.

As Cassie and Sunny dig further into their cold case, the victim David Walker is revealed as more and more sordid. When Cassie brings the woman who said David raped her while she was at reform school to the home where he hosted gatherings with young children, she reveals that these were explained away as prayer meetings. She was taken there three times; once, a woman who seemed to be David’s partner came and argued with him outside, then took her home.

That woman could be David’s wife, Tessa, though she denies it. But the victim identifies her, and Tessa eventually explains to her boss upon leaving the police that she forced herself to believe David when he said the girl was 16 and willing, because she didn’t want to believe her husband was capable of such things. Tessa can’t forgive herself. Nor can her son Jason, who follows her second husband Paul by leaving her to live alone.

But the disturbing occurrences of Tessa’s past are nothing compared to those of Colin, Sara, and Marion. The reform school woman believes she recognizes Sara from one of the gatherings. But when Cassie questions Sara, she stonily denies any knowledge of the gatherings, relating a sanitized version of her past.

While Sara is interviewed by Cassie, her husband Hassan talks to Sara’s long-lost father. Her father saw a cruel picture of Sara on his grandson’s phone – jokes about her past as a prostitute have been spreading – and recognized her. He tells Hassan the real version of Sara’s past. Her mother died in a car crash when she was 12, and she became angry and rebellious, taking up alcohol, drugs, and truancy, so he kicked her out. He bitterly regrets this, and searched for her for years. He asks Hassan to share with her his love and sincere apology, then leaves.

Understanding his wife’s difficult past spurs Hassan to find evidence proving that she was in Italy at the time of David’s murder, thus exonerating her. He finally discovers receipts and dated photos in the attic, and brings them to the police.

So if Sara isn’t the murderer, was it Marion? Her former IRA associate said Marion offered David as a target, but Marion denies it. Nor does the theory that Marion was abused by David and sought vengeance pan out: she was living in Ireland at the time of David’s gatherings.

What about Colin? Apparently David wanted Colin out of the picture. Sunny has discovered that the woman who accused Colin of rape when he was a banker previously worked for David. When Sunny interviews her, she admits that David paid her ₤5,000 to accuse Colin, because Colin was asking David too many questions about his personal life.

This is welcome news to Colin, who has believed his whole life that he assaulted someone – he was black-out drunk at the time. But Colin was in a hospital when David was murdered, and he didn’t come to London from Scotland until he was 19, well above the age of the children at David’s gatherings.

Unfortunately, Colin once again forgets to pick up his soon-to-be-adopted daughter Flo because of the police interrogation. Facing these transgressions and also blackmailing from Flo’s birth mother, Colin and his husband Simon decide to tell the adoption agency everything. Colin is asked to move out of the house for a bit; if he is cleared in the David Walker investigation, maybe the adoption can still go through. 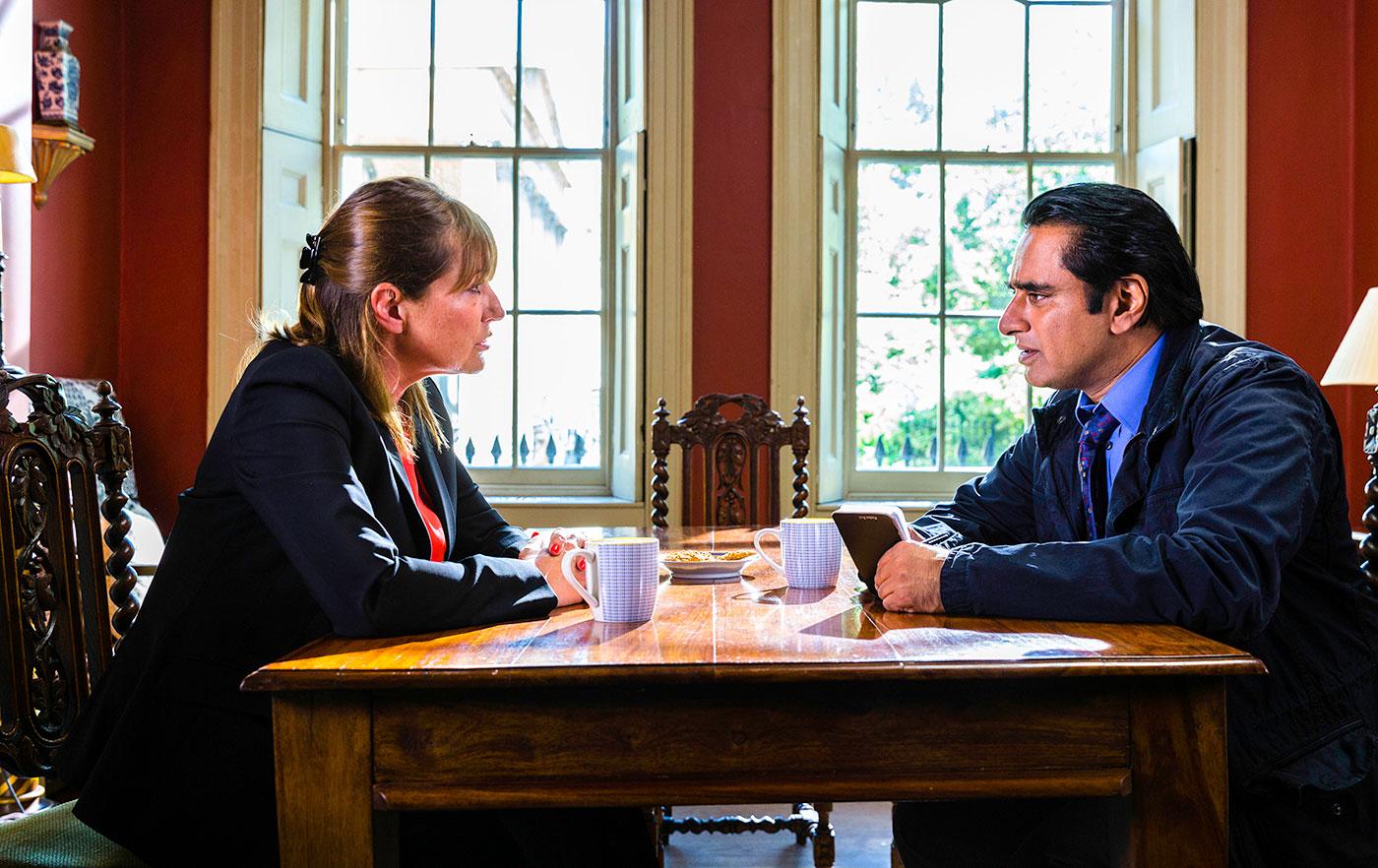 After reaching an impasse, Cassie has a breakthrough, and the detectives go to question family members about their suspects' childhoods. Photo: John Rogers/Mainstreet Pictures

And so the case is at an impasse. Stymied and needing a break, Cassie and Sunny go to a pub and get drunk. As they talk about relationships, Sunny almost kisses Cassie – and she excuses herself to leave. But she’s suddenly hit by inspiration.

Sara’s alibi seems too watertight – it’s almost as if she knew David Walker was going to be killed and made sure to have exonerating evidence. Letting Hassan discover it makes the story only more believable. Perhaps, Cassie posits, Sara, Colin, and Marion – who all have dysfunction characteristic of childhood abuse – were all abused, and conspired to kill each other’s abusers. Sara and Colin at least were at a psychiatric unit together and Marion could have been there at the same time. Marion would have killed David, Colin, Marion's abuser, and Sara Colin's.

To test this theory, the detectives visit family members. Colin’s dad explains that Colin suddenly changed from gregarious to aggressive around age nine. With Cassie’s guidance, he identifies a possible abuser, a scoutmaster. Cassie learns that this man went to prison for assaulting two young boys, and then seemingly killed himself – his boat went missing, but a body was never found.

Marion’s sister Elise tells Sunny a similar transformation occurred with Marion when she was eleven. She became distant from everyone except their dad; the two were always close. Their dad killed himself years ago, but had no history of depression. This sounds suspicious, so Sunny questions Marion’s mother, with Elise, and learns that Marion tried to tell her mother that her father was assaulting her – but their mom didn’t believe her. Elise is furious.

When Cassie goes to question Marion herself, hoping to get to her before Elise does, she sees the sisters hugging and decides to follow Marion instead. She is eventually led to a meeting between Sara, Colin, and Marion.

Knowing the gig is up, Colin tells Cassie about the abuse he suffered, its physical and psychological consequences, the shame and guilt it caused. “You can’t judge me unless you’ve had it done to you,” he tells Cassie.

Meanwhile, Sara confesses about the murders to Hassan, and Marion opens up to her husband Tony. (She has finally begun to apologize to loved ones for pushing them away, telling the cancer patient Zoe earlier that she is sorry and would want her own daughter to be like Zoe.) Marion’s father assaulted her every week for a year; when she told her mom, she responded only by staying in the room with Marion on the night he would do it, but after six months of being protected in this way, her father raped her while her mother and sister were at the movies.

Cassie is troubled. Sara, Marion, and Colin are all valuable members of society, helping the most vulnerable people. They will not murder again, and their whole life has been a punishment as they cope with the effects of terrible abuse. So why should they go to prison? There’s no proof that they know each other and thus conspired to murder, other than her own sight of them together. She and Sunny decide to bury this and let the three go free and try to repair their lives.

A happy ending is possible. Cassie’s dad went to meet her mother’s lover, searching for understanding of why she would cheat on him. In return, the lover sent him the letter his wife wrote explaining that she needed to break off the affair, because she loved her husband too much. It is possible to transcend your past.