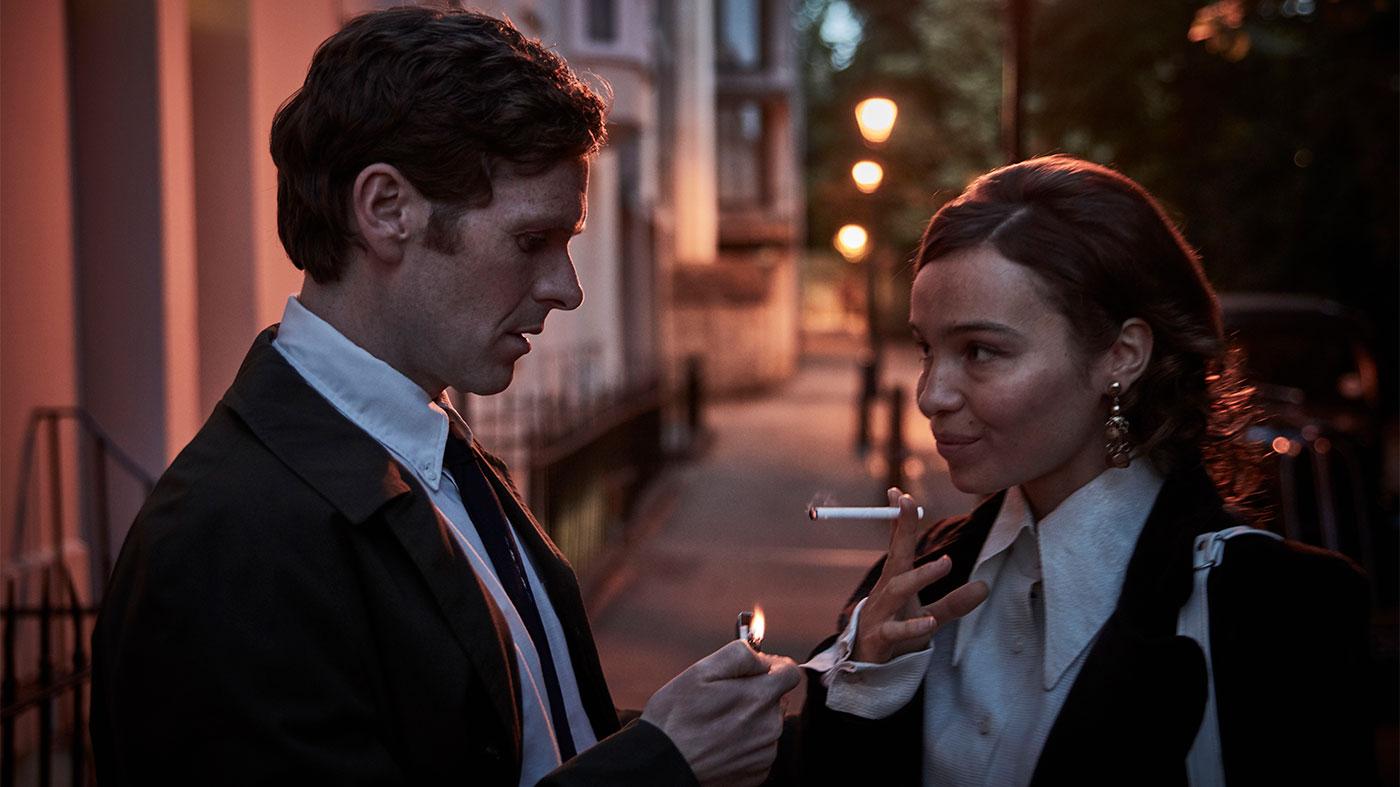 Even while Morse solves crimes, he's continually distracted by the prospect of Joan – until she tries to set him up with someone else. Photo: ITV and Masterpiece

The crime lord Eddie Nero has already lost a collections man to stabbing and had some of his housing complexes targeted, and now it seems that someone is also trying to elbow in on his contraband business. A truck connected to Nero carrying whiskey, cigarettes, and tinned food is robbed, the driver killed. With the restructuring of the police division, a new team is assigned to lead the investigation, with Thursday in a managerial role and Morse kept off the case. Fancy is the lone man on the ground from the Oxford police.

With that, Morse is forced to take over a missing persons report. Frances Porter has disappeared, according to her sister Jilly and husband Noel. Morse visits the psychedelic shop where Frances works, and learns from Anoushka, a salesperson, that Frances had been having an affair with a man named Don. Frances had borrowed a hat and shoes from the store to meet Don at a motel when she went missing.

The receptionist at the motel gives Morse Don’s vehicle registration, which the motel requires for check-in, and Morse tracks down its owner: Don Mercer, a dessert salesman. Don’s a married man, and it seems Frances gave him a false name, perhaps to protect her own marriage. Don knew her as Jilly – her sister. Don says he dropped Frances off at the train station after their assignation, and hasn’t seen her since.

Morse follows the trail to the train station, where the stationmaster doesn’t remember seeing her. There aren’t many trains late Sunday night. But a railway nerd, Cedric, who overhears this conversation informs Morse that that’s not quite true – a “ghost” train, used to keep the railway functioning at low usage times, did come through that evening – Frances could have ridden that.

But the ticket-taker at the station where Frances would have alighted never saw her either. So Morse follows the railroad himself, and detours down some overgrown, unused tracks. At an abandoned station, he finds Frances dead by strangulation, bound at the hands and sans shoes.

As Frances’s body is being removed, the reporter Dorothea Frazil arrives at the scene. She asks if this case is related to the murder of Linda Gresham four years ago, since the teenaged Linda was also found shoeless and strangled near a railway station.

Even with those similarities, this might have been a crime of passion. Frances was eight weeks pregnant, and her husband said they couldn’t conceive. A witness saw Don and Frances outdoors Sunday night – is the baby his, and did he kill her over an argument about it? Don admits that they got into a simple spat and he didn’t take her all the way to the station, but he didn’t kill her.

His claim of innocence is given credence when Frances’s coworker Anoushka is found dead, strangled and bound near a railway station like Frances. Except she still has her shoes. The murders of Anoushka and Frances differ from Linda’s in one significant way: Linda was strangled with her bra, the other two women by hands. So maybe this is a copycat killer, not the same person who murdered Linda.

Meanwhile, the team assigned to the truck robbery isn’t making progress – maybe because they’re a bit inept, as when they park for surveillance in a restricted zone, a mistake WPC Trewlove points out to their misogynistic chagrin. Trewlove later notices that a West Indian merchant at an outdoor market is using cardboard boxes bearing the logo of the stolen whiskey, and that he’s not afraid to deal in stolen goods – he has a record she recognizes from Morse’s burgled flat for sale.

She tips Fancy off, and he sets up an appointment with the merchant, posing as a student who wants to buy whiskey cheap. When Fancy tells the other cops on his team about the lead, one of them angrily confronts Trewlove for interfering in their case, and nearly assaults her. Chief Bright kicks him off the case and out of the station, but not before the rogue officer threatens Bright as well.

When Fancy arrives to meet the merchant, he finds him bleeding. The man wheezes a name – Cromwell Ames – then dies. Next to him is a slaughtered black rooster – an ominous voodoo symbol. It seems a West Indian gang may be trying to challenge Eddie Nero.

But back to the railroad murders. Morse goes to visit Frances Porter’s dementia-addled, widowed mother, who lives in a nursing home that is paid for by her considerable fortune. Supposedly she was on bad terms with Frances. She’s unresponsive, but when Morse gestures towards one of the many photographs of Frances in her room, she picks it up, kisses it, and coos “Jilly.” Morse assumes the mistake is due to the dementia.  As he leaves the home, he learns that, coincidentally, one of the nurses there is the mother of Linda Gresham.

Suddenly things snap into place. Why would Frances’s mother have so many photos of her if they weren’t speaking? Maybe she wasn’t confused about her daughter’s name. The murdered woman must actually be Jilly, and her sister Frances, along with her husband, killed her and is pretending to be her. That way, the surviving sister, who now has power of attorney, could get to her estranged mother’s money.

The real Jilly called Frances for a ride after being left by Don. Frances and her husband then murdered her and staged it to look like the murder of Linda Gresham, whose story Frances came across when she met Linda’s mom at the nursing home. Then they killed Anoushka when she spotted Frances – who she thought was dead. Frances and her husband were about to fly to another country with their newly inherited money, before the deception caught up to them.

Then who was Linda’s killer? The resurgence of railroad murders has apparently inspired him to strike again. Cedric, the railroad geek, tries to assault the wife of a stationmaster, but she fights back with a knife. As Morse and Thursday chase him down, he steps onto train tracks – whose schedule he knows all too well – and is killed by a train.