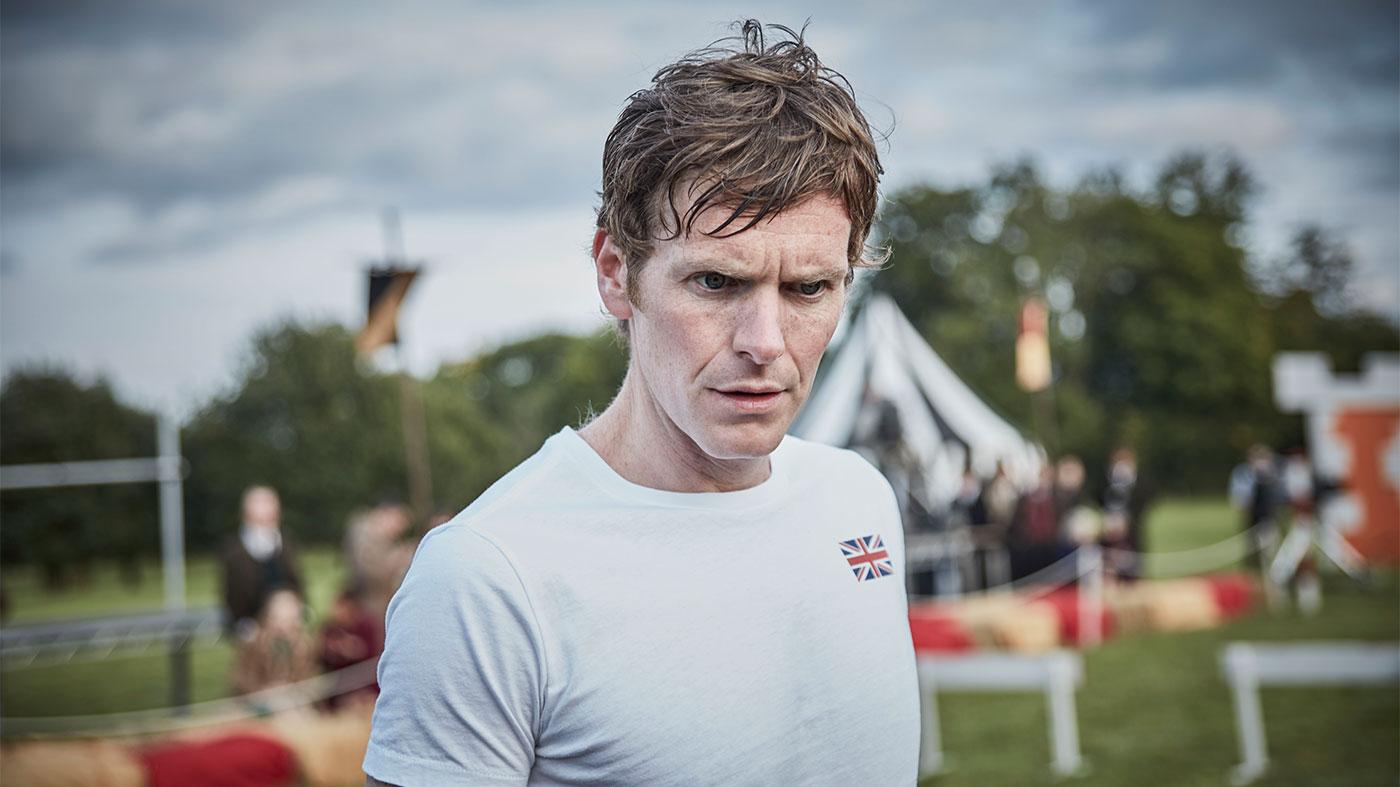 When an assassination occurs during a silly race that Morse takes part in, he becomes obsessed with solving it even after being warned off the case. Photo: ITV and Masterpiece

Soviet spies, poisonous fish, playboy barons, a gun disguised as an umbrella: Morse has stumbled into the world of James Bond, and he even wears a tuxedo to prove it.

But first he dons a cartoonish giant costume for a race in a set of goofy international games taking place in Oxford. As the giants hobble along, the Swiss contestant stumbles into the German, both the German and a boy near him on the sidelines collapse, and Morse wins the race.

But neither the boy nor the German get up – they’ve both been shot. The boy is rushed to the hospital; the German is dead. It seems that someone has come all the way to Oxford to assassinate Karl Pfuscher, the German, with a silenced pistol, and the unlucky boy was hit accidentally.

The Swiss contestant was a last-minute substitute, so no one knows who he is. When the police visit the hotel room of the teammate he replaced, they find the original competitor dead by strangulation. In Pfuscher’s hotel room, Morse finds a book with Wordsworth’s poem “Composed upon Westminster Bridge” marked off by a postcard from Pfuscher’s Czech lover.

But then all the collected evidence, including the bodies of both Pfuscher and the Swiss teammate, disappear. Special Branch is taking over the investigation. But Morse can’t let the little boy who was shot go without justice, so he continues digging.

Through press clippings he discovers that Pfuscher was friends with an Oxford professor, Dr. Schneider. Schneider leads Morse to another Oxford don, Professor Richmond, but Richmond claims not to remember Pfuscher, even though he demonstrates a keen memory of a bridge game he played with Morse years ago.

Then Morse receives a mysterious call telling him to come to London in an evening suit if he wants more information about Pfuscher. After some misdirection intended to shake any followers, he comes to a private library and meets Singleton and Louis, wardens of the crown. These secretive government agents want Morse to investigate the multimillionaire perfume baron Sebastian Fenix, specifically Lab 4 at his facility. Pfuscher served as an interpreter for Fenix in Geneva.

Morse is put off by all the cloak-and-dagger nonsense, but decides to follow the lead. While signing into Fenix’s factory, he sees Pfuscher’s name on the log – except Pfuscher never signed out. The self-assured Fenix explains to Morse that the facility produces not only perfume but also does pharmaceutical research for the government, in Lab 4. Morse has to leave without discovering anything unusual, other than an eye-catching gold trinket in the tank of a poisonous fish.

Luckily, Schneider offers new leads: Pfuscher had asked about his old language tutor in Oxford, a Mrs. Bagshot, in his last letter. And Schneider also sends a sketchbook leading to the home of a girlfriend Pfuscher once spoke about.

Bagshot feigns ignorance until Morse presents her with Pfuscher’s phone bill, which proves he spoke with her. She suddenly turns steely and warns Morse off the case. Leave it to Special Branch, or he’ll get himself killed. 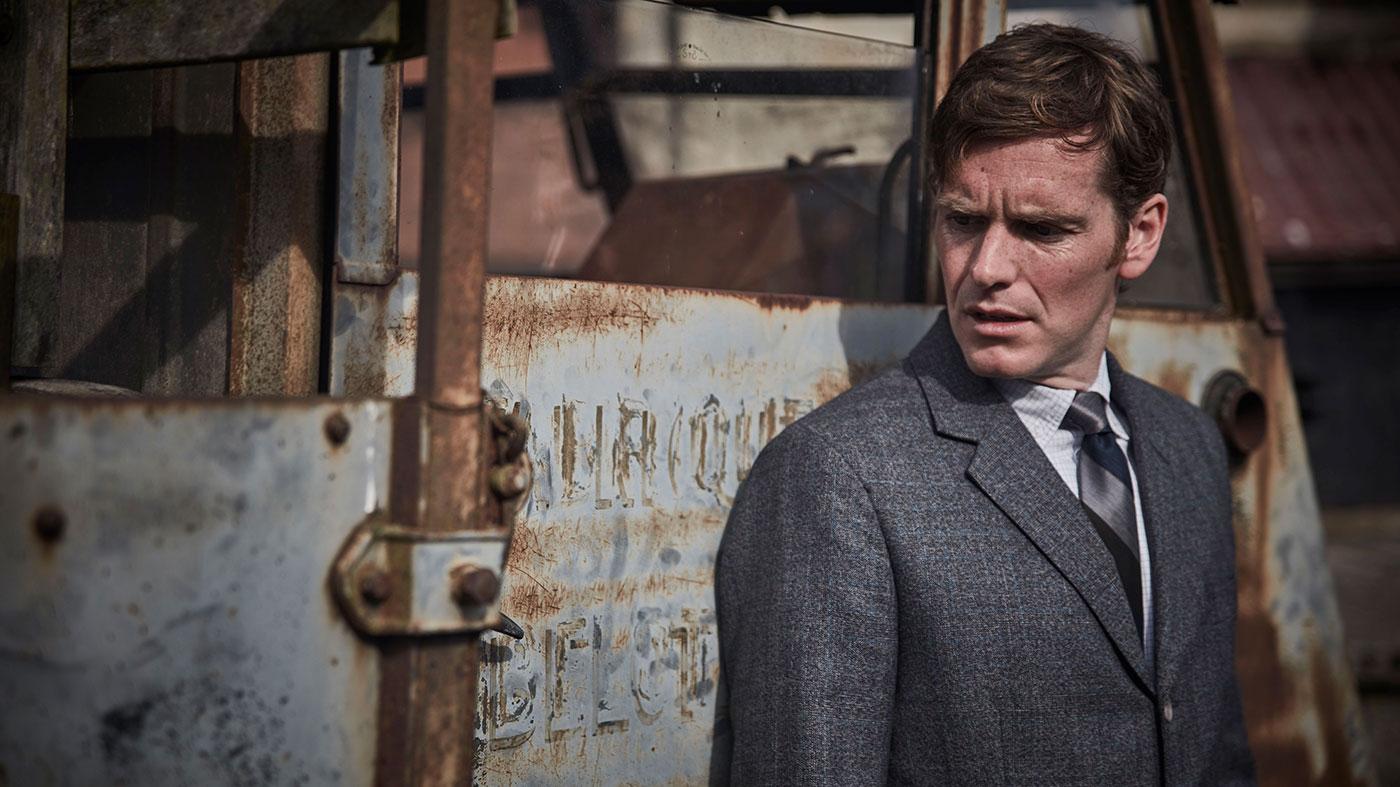 Morse has stumbled into the midst of dangerous Cold War espionage, complete with double agents and trained killers. Photo: ITV and Masterpiece

Morse nevertheless persists, and visits the house of Pfuscher’s girlfriend. Finding the door open, he enters – and is attacked. He narrowly escapes choking when Bagshot enters and shoots Morse’s assailant in the back – it’s the assassin who killed Pfuscher. He’s a KGB thug, Bagshot is a British agent, and the home is a safehouse. Pfuscher had been recruited by Professor Richmond as an asset for British intelligence and was going to reveal to Bagshot the names of a decades-old Soviet cell in Oxford after the games. That’s all Bagshot will say, before once again warning Morse off the case.

Morse decides to sneak into Fenix’s factory at night to grab the gold trinket from the fish tank – it’s a key to another room at the hotel Pfuscher was staying at. He also discovers that Fenix is using ambergris in his perfume – a common enough ingredient, Singleton and Louis explain when Morse reports to them, but Pfuscher had discovered that Fenix is getting it illegally from Soviet traders in exchange for confidential governmental scientific information, and now Morse has brought them proof. Pfuscher himself failed to retrieve proof when he went to Fenix’s factory.

As a reward for the intelligence, Singleton and Louis point Morse to a shed in a communal garden, where Morse finds a radio spouting gibberish in German – a way of transmitting codes to foreign agents. The shed is held in Professor Richmond’s name.

Morse realizes that Richmond was a double agent, recruiting assets like Pfuscher for the British then ratting on them to the Soviets. When Morse and Thursday confront Richmond, however, he’s killed by a sniper. Fancy was guarding the gate – the only person to move in or out of the compound housing Richmond’s office was the doorman. Morse and Thursday apprehend him – his signature umbrella concealed a rifle with which he shot Richmond.

But Pfuscher had reported that the Oxford cell had four agents. Who are the other two?

While Morse puzzles over that, Thursday responds to a call. Joe Dozier, the proprietor of the corner store Thursday visits to get his daily newspaper, has taken a fatal tumble down the stairs in his home. Thursday has recently suspected Joe has been beating his wife Elsie, who was even sent to the hospital for a bad injury from a “fall.” So Thursday, discerning the real circumstances of Joe’s own fall, lets Elsie off the hook; they’ll agree it was a simple accident.

Morse isn’t happy with Thursday’s decision, though. He’s visited the second room Pfuscher rented in the hotel, using the key he found at Fenix. Remembering the bookmarked “Composed upon Westminster Bridge,” he notices a painting of the same bridge, and a clock sitting in front of it, stopped at exactly the same time as Big Ben in the painting. On the backside of the clock is a microfilm containing the identities of all four members of the Oxford Soviet cell. The other two agentrs? The Doziers.

Morse confronts Elsie and accuses her of harming innocent people, like the boy who was shot at the games but is finally, thankfully, recovering. As Morse leaves Elsie’s flat, he spots Bagshot lurking across the street. He walks away, and she predatorily moves in.