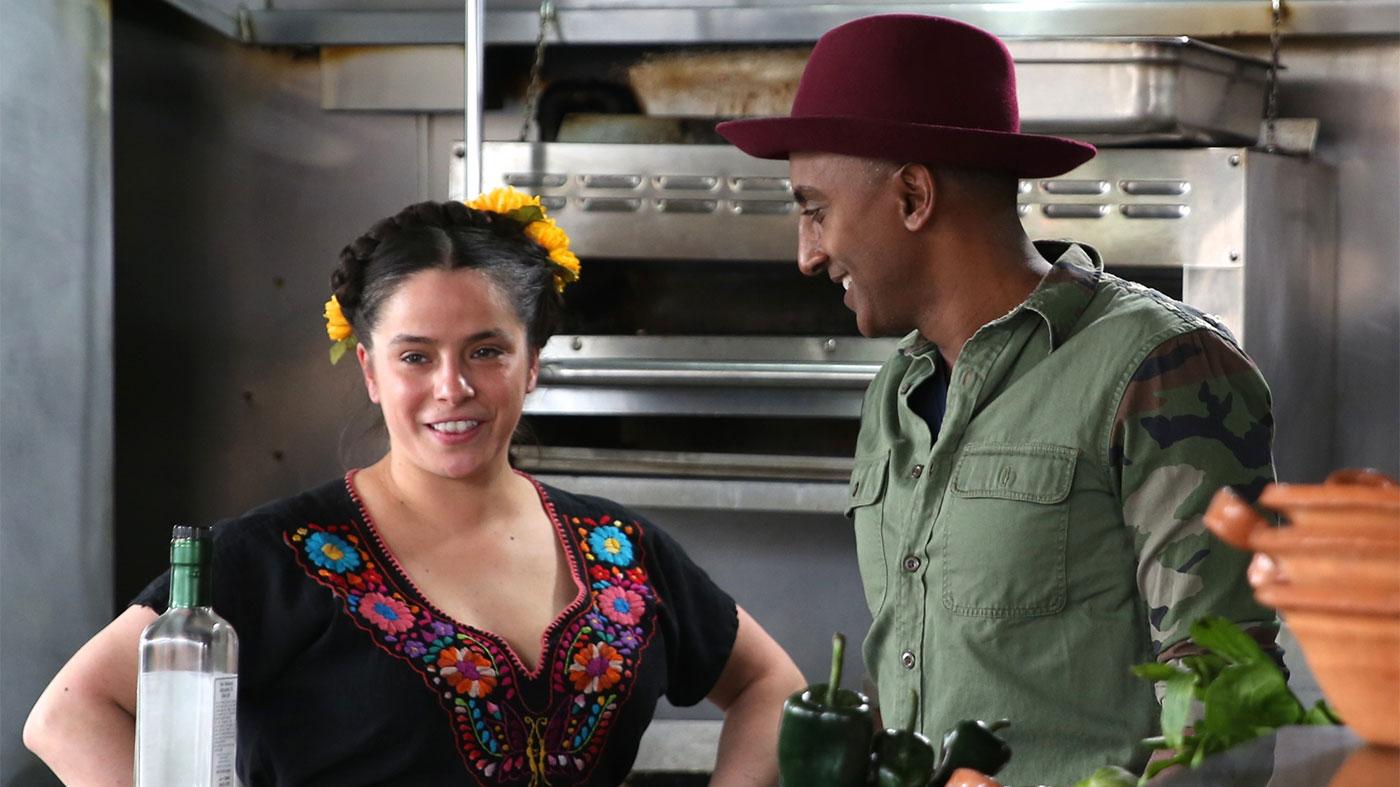 No Passport Required is available to stream.

In the latest episode of Eater and PBS's No Passport Required, in which chef Marcus Samuelsson visits various immigrant communities in cities across the country to learn about their food, culture, and lives, he comes to Chicago to explore the cuisine and culture of Chicagoland's 1.7 million-strong Mexican community. Further immerse yourself in the foods, sights, and people of the community with recipes, videos, and more from WTTW.

If watching Samuelsson and Diana Dávila make mole verde at her Logan Square restaurant Mi Tocaya Antojería puts you in the mood to try one of Dávila's layered recipes, or even just enjoy more of her forthright personality, turn to Dishalicious, which she appeared on alongside fellow Chicago chefs Rick Bayless and Alfonso Sotelo. With the help of host Sarah Grueneberg, she cooked up enchiladas potosinas, which are closer to an empanada than the sauce-drenched Tex Mex version you may know. Watch the show below, and try her recipe (which also includes guacamole, two kinds of salsa, and ensalada fresca) here.

Carlos Gaytan's Life Beyond the Kitchen

The first Mexican American chef to receive a Michelin star, for his bold combination of Mexican ingredients and dishes with French techniques at the now-closed Mexique, Carlos Gaytan is a pioneer of upscale Mexican cooking. In No Passport Required, he makes tamales alongside caterer Atzimba Perez. But he's not just an innovative chef; he's also a passionate scuba diver who spent time in his youth diving and foraging along the Pacific Coast of Mexico, and now wants to preserve reefs for future generations. Learn about his life outside the kitchen in this episode of our digital series Chefs off the Clock.

Hector Duarte and the Murals of Pilsen

In No Passport Required, Cesáreo Moreno, the chief curator of the National Museum of Mexican Art, discusses the history and murals of Pilsen, singling out muralist Hector Duarte and his colorful home. WTTW's My Neighborhood project explored Pilsen in depth and includes a profile of the prolific Duarte, a gallery of the neighborhood's vibrant murals, and a look at their history and the activism that inspires many of them. And if you want to learn more about Pilsen and its incredible people as well as the problems facing it, you can watch the documentary.

The Story of One Successful Mexican Restaurant Owner

No Passport Required emphasizes the contributions to America and success stories of immigrants, especially as evident through their cuisine. The story of Marcelina Hernandez fits perfectly into this ethos. A single mother immigrant to Chicago, she initally struggled to survive with her daughter and support her mother, even losing all her belongings at one point. Now, after years of building up a business selling her homemade tamales on street corners and at farmers markets, she owns a thriving restaurant. Watch her story in this My Neighborhood web video.