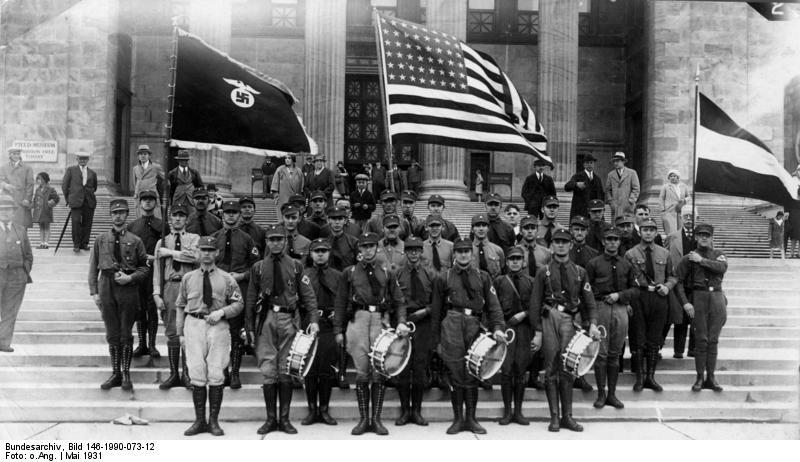 Rick Steves: The Story of Fascism in Europe airs Wednesday, May 20 at 9:00 pm.

Last year, a pair of Chicago aldermen proposed renaming a Chicago street to honor the journalist and anti-lynching activist Ida B. Wells, and in July of this year the proposal was approved for a stretch of Congress Parkway. But Congress wasn’t the street originally considered for renaming; rather, it was Balbo Drive.

7th Street became Balbo Drive in 1934, in recognition of Italo Balbo, a leading Italian Fascist under Benito Mussolini. There’s also Balbo Monument east of Soldier Field, a 2,000-year-old column donated by Mussolini to the city the same year. Why does Chicago have a street and monument honoring a Fascist? 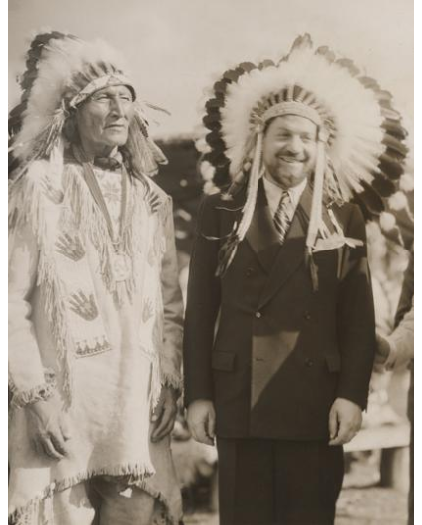 Italo Balbo and Chief Blackhorn of the Sioux at the Century of Progress World's Fair in 1933. Photo: Chicago Historical Society In 1933, Balbo led twenty-four seaplanes on a pioneering sixteen-day transatlantic journey from Rome to Chicago, flying over the Century of Progress World’s Fair before landing in Lake Michigan near Navy Pier. Balbo and the pilots were celebrated by Chicago’s high society over the next three days. Chief Blackhorn of the Sioux, who was participating in the World’s Fair, granted Balbo a headdress and christened him “Chief Flying Eagle;” Balbo gave the Chief a Fascist medallion in return. He and his pilots then continued on to New York City. Balbo was featured on the cover of Time magazine and had lunch with President Franklin D. Roosevelt.

The following year, Mussolini sent the column to Chicago to commemorate Balbo’s flight, and it was installed in front of the Fair’s Italian Pavilion. 40,000 people attended its unveiling, and a speech by Balbo was broadcast by radio from Italy. After the defeat of the Fascists in World War II and the revelation of their crimes, Italy’s ambassador to the United States suggested that marks of respect on the column to Balbo and the Fascist government be removed. Despite those changes, the monument still stands, and Balbo Drive retains its name despite the proposal to change it, being a point of pride for many Italian Americans in Chicago.

The World’s Fair was also the site of a subtle protest against fascism in Europe, when a pageant dramatizing Jewish religious history took place in Soldier Field in July of 1933. According to the Chicago Daily News, the event drew 150,000 people of various faiths, and the “spiritual kinship” and “fine fellowship” between Christians and Jews there would “carry rebuke to those who oppress the Jew” in “Hitler’s Germany.” 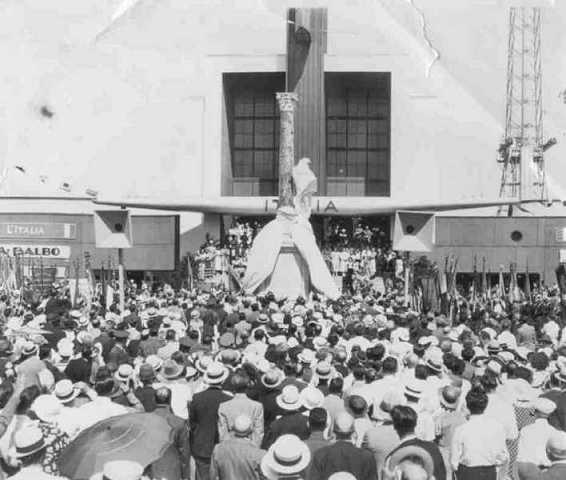 Two years later, Soldier Field saw a different kind of demonstration that does not seem to have been explicitly anti-Semitic but did feature the Nazi swastika. In 1936, a “German Day” rally included a march with both the American flag and a flag bearing the swastika. But the German American community in Chicago mostly laid low during World War II, careful to conceal their ethnicity and avoid experiencing some of the anti-German sentiment they had already experienced during World War I. However, in 1939 a rally in Merrimac Park supporting the German-American Bund, an organization sympathetic to Nazism and Hitler, attracted several thousand people.

Decades later, a tiny flare-up of support for fascism in Chicagoland attracted outsized national attention. In 1977, a small neo-Nazi group called the National Socialist Party of America sought to hold a demonstration in the northern suburb of Skokie, which had a large population of Jewish people, including some 7,000 survivors of the Holocaust. The suburb originally planned on letting the demonstration happen and moving on, but was convinced by members of its Jewish community to prevent it. (In 1966, the head of the American Nazi Party came to Chicago to march against Martin Luther King, Jr. as Dr. King protested unfair housing practices in the city.)

After passing ordinances that would prevent the demonstration, Skokie was challenged in court by the neo-Nazis, who were supported by the legal backing of the American Civil Liberties Union. The ACLU did not support the views of the group, but rather sought to protect the First Amendment rights of freedom of speech and freedom of assembly. David Goldberger, the ACLU lawyer who led the case, was Jewish.

30,000 members of the ACLU resigned in protest, and financial support for the organization dropped precipitately. Yet the lawyers persevered, fearing that any denial of free speech was a slippery slope. Through various courts, injunctions, and proposed legislation, the neo-Nazis eventually won the case, which even made it to the Supreme Court. 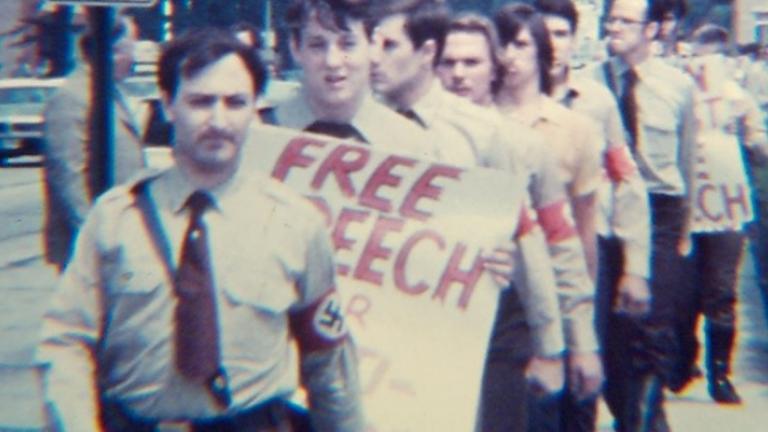 The National Socialist Party of America in Skokie, Illinois

But the neo-Nazis never demonstrated in Skokie. Instead, they staged two marches in Chicago, one downtown and one in Marquette Park. Counter-protesters vastly outnumbered the ten or twenty neo-Nazis in both cases. The leader who spearheaded the marches and garnered the media’s attention during the Skokie case was later convicted for child molestation. (The hapless National Socialist Party of America is famously satirized in the 1980 film Blues Brothers.)

In the wake of the Skokie case, Illinois became the first state to mandate Holocaust education in schools. And in 2009, Skokie became the site of the Illinois Holocaust Museum and Education Center, an implicit rebuke to the attempted Nazi demonstrations of three decades prior.

Watch Skokie: Invaded But Not Conquered about the Nazi controversy in Skokie and Chicago that was broadcast on WTTW in 2014: 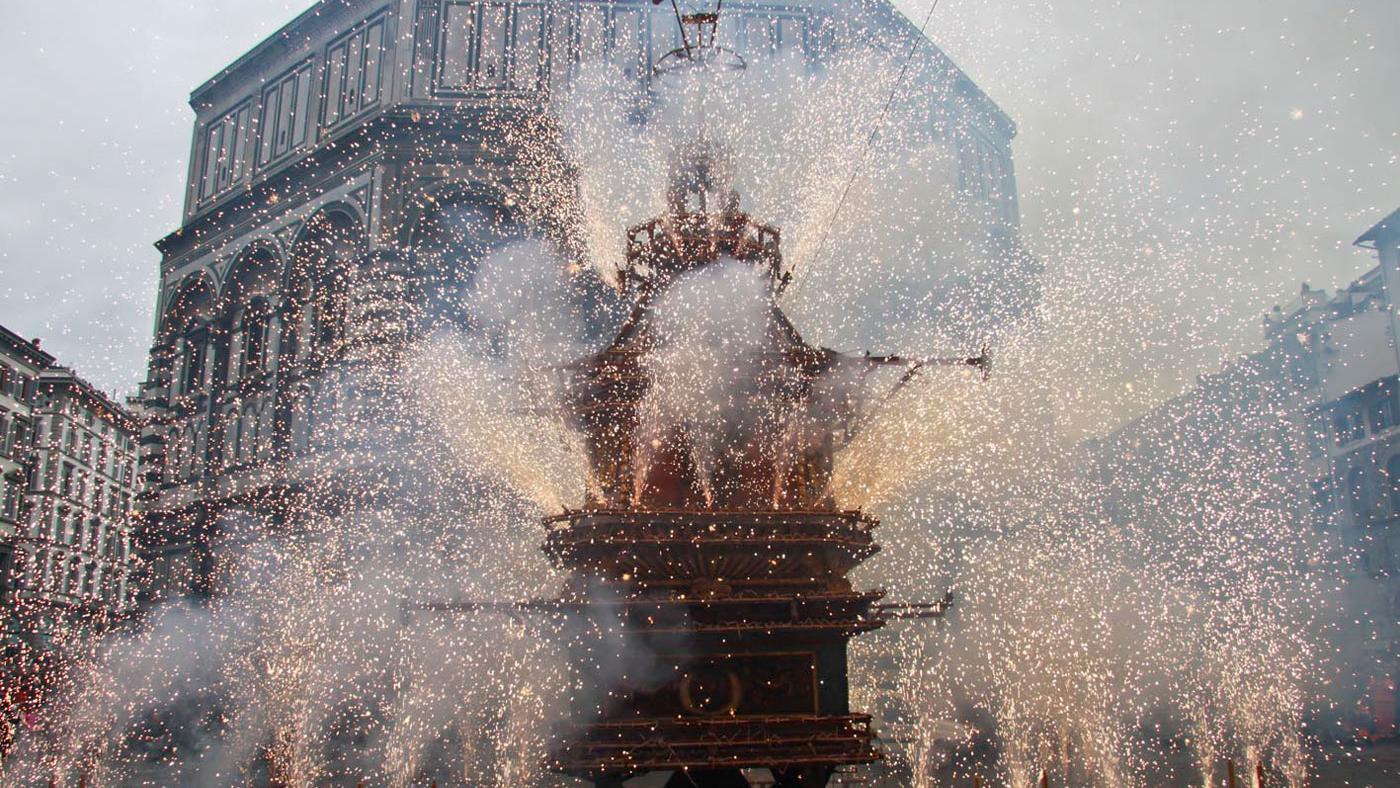 Easter Around the World