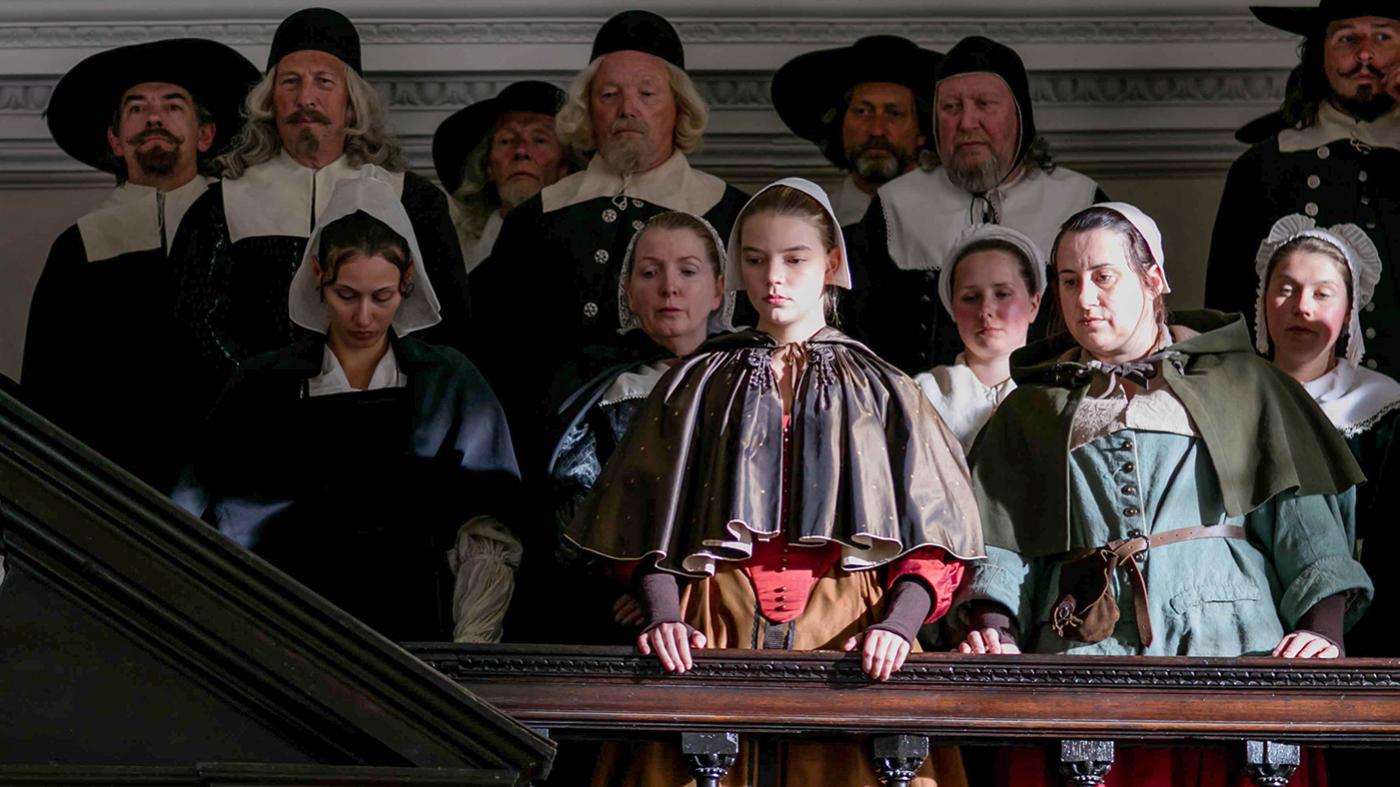 Can Nella save Johannes as he is put on trial for assault and sodomy? Photo: The Forge/Laurence Cendrowicz for BBC and MASTERPIECE

The Miniaturist is available to stream. Recap the previous episode here.

Of all the secrets in Nella’s new life in Amsterdam, Marin’s pregnancy was the best hidden. Having been stopped from drinking a potion to lose the baby, she admits to Nella that she’s six or seven months in – she had her frocks loosened so that she wouldn’t show.

Yet the miniaturist still somehow knew. Cornelia notices that Nella’s miniature house has a crib, and that the Marin doll also has a baby hidden under her frock. But any musings on the miniaturist’s seemingly supernatural knowledge are interrupted by the raucous arrival of the militia. They’re there to apprehend Johannes on charges of sodomy and assault – and he is soon found, hiding out on a boat in the port.

Nella goes to visit Johannes in jail, bribing the guard so that she can bring her husband some food. Johannes has grown fond of his wife, calling her a “miracle.” And she may have a miraculous way out of this trouble: pass off Marin’s baby as her own, to help clear suspicions that Johannes is gay. But Marin objects to this plan: she refuses to have her child taken from her. In fact, she’s already ordered a crib, identical to the one that sits in Nella’s miniature house. 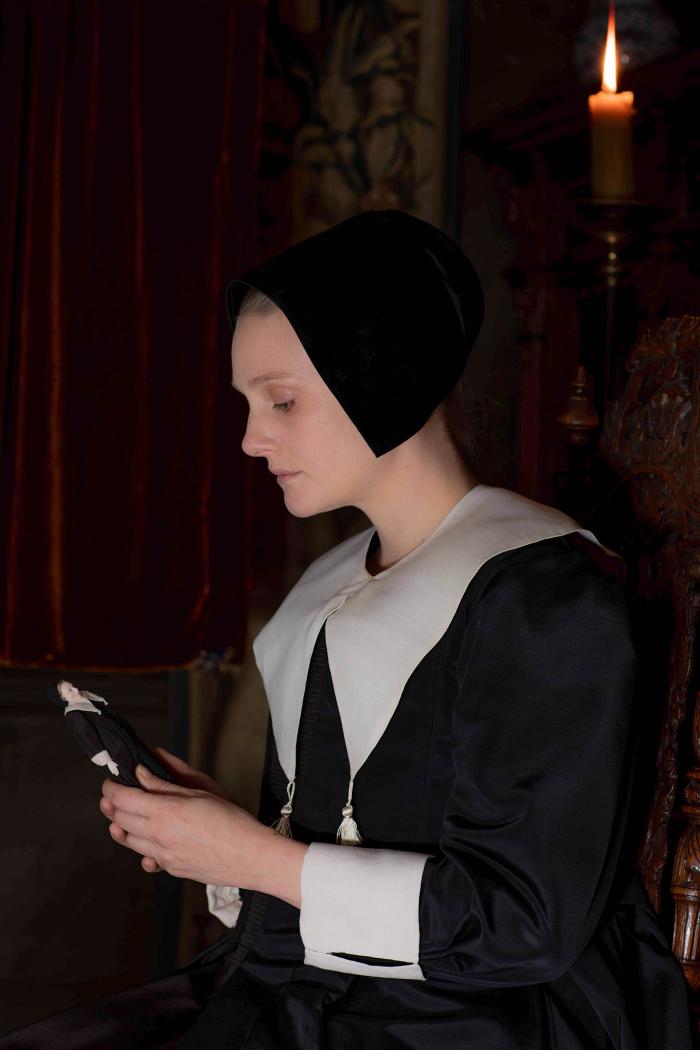 Nella has a plan that could save both Johannes and Marin, but Marin refuses it. Photo: The Forge/Laurence Cendrowicz for BBC and MASTERPIECE Nella wants Marin to tell Frans Meermans, her admirer and also Johannes’s primary accuser, about the child – perhaps he will relent in his prosecution of Johannes when he learns that he is to be a father. But Marin will not, revealing that she was the one who refused to marry Frans. She had become accustomed to the freedom of being an unmarried head of a household, so she asked Johannes to veto the marriage.

Her first plan nixed, Nella hatches another scheme. Inspired by the tiny cookies in her miniature house, she decides to sell some of the Meermans’ sugar to a baker, and negotiates a good price. The baker quickly profits from that small amount, and asks to buy more. Nella approaches Frans with this good news and the initial sum of money after the first day of Johannes’s trial, hoping to dissuade him from testifying against Johannes. Failing in that, she tries to ease Frans’s animosity towards Johannes by revealing that Marin was the one who refused marriage. Another dead end: Frans doesn’t believe Nella. He does let slip that Agnes Meermans has also been receiving eerie miniatures – she was fidgeting with a doll of Nella during the trial. Disturbed by the miniatures, Frans had the militia shut down the miniaturist’s shop.

Nella returns home to find Marin in labor, refusing to call for a midwife because the law would require the midwife to record the father of the child. Nella watched the birth of her two younger siblings, so she and Cornelia manage to successfully help Marin give birth to a daughter. Marin names the girl Thea, and everyone collapses in exhaustion.

Nella wakes late the next morning and has to rush off to Johannes’s trial, leaving Cornelia to care for a sickly Marin as well as the newborn. She tells Cornelia to call a wet-nurse if Marin doesn’t get better.

The situation at Johannes’s trial isn’t any better. Jack has – nervously, hesitantly  testified that Johannes sodomized him, stabbed him, and then tried to buy his silence. Knowing that Jack’s stab wound is old, from Otto, Johannes tries to force him to show the wound to the court, thus revealing an inconsistency in the timeline and proving himself innocent of assault. But the judge is biased against Johannes, already convinced that he is a devilish sodomite. 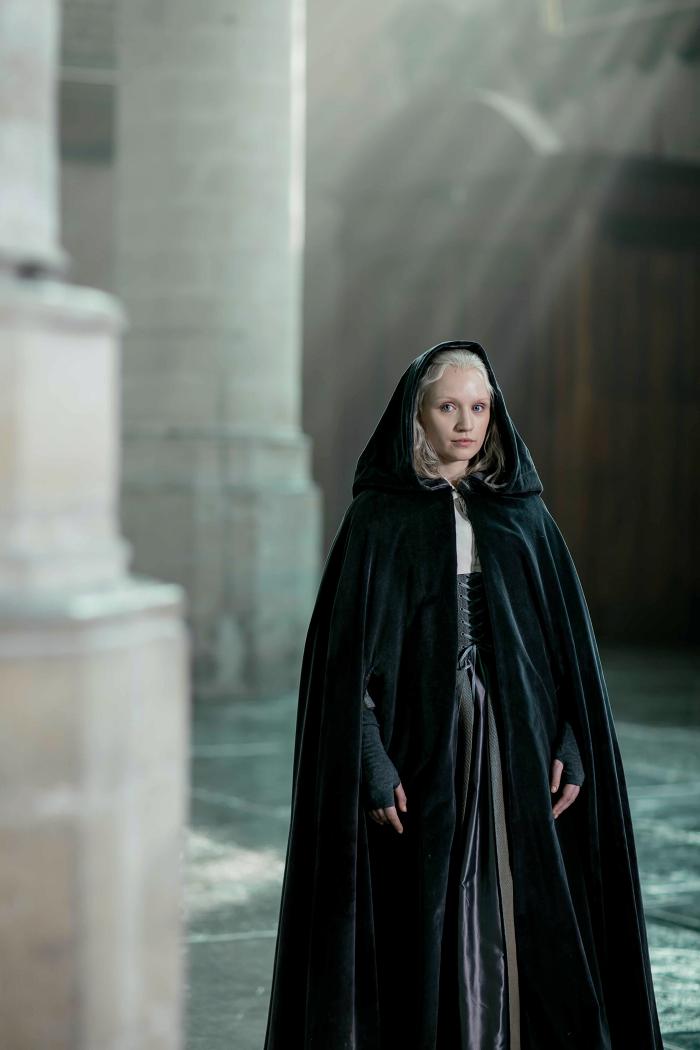 Turns out Nella isn't the only one who has been receiving eerily knowledgeable dolls from the miniaturist. Photo: The Forge/Laurence Cendrowicz for BBC and MASTERPIECE Frans corroborates Jack’s account, aided by the leading questions of the judge when he stumbles in his testimony. Johannes makes a last plea for himself, admitting that, while he did love Jack, he never assaulted him, and that he considers Frans a friend whom he hurt long ago. The court adjourns without a verdict.

Nella once again finds a startling scene at home. Marin is dead. The wet nurse could do nothing. And the baby? She’s fine – but she’s black. The father was not Frans but Otto. Nella bribes the wet nurse to keep silent. A bribe again comes in handy when Nella goes to the cathedral to have Marin buried. Though Marin was a “godly” woman, the priest refuses to have a sibling of the tainted Johannes buried there – but a pouch of money changes his mind.

What of Johannes’s fate? The court finds him not guilty of assault or of bribes. Great! – except he is guilty of sodomy. He is sentenced to be drowned.

As Nella leaves the trial, she spots the miniaturist and follows her to her empty shop, where the miniaturist disappears. Nella discovers a hidden door behind a tapestry and finds a chamber filled with miniatures and letters from women asking how the miniaturist knows so much about their lives. Her parakeet is there too, and so is the miniaturist herself, hiding in a corner. Turns out the miniaturist is not some all-knowing, magical psychic – she’s just more observant than most people. She has no answers or advice for Nella; in fact, she’s leaving Amsterdam tonight. All she can offer is an assertion that Nella has power over her own life.

Power over her life, but not over others dear to her. Nella again bribes a jail guard to let her stay with Johannes the night before his execution (she spares him the knowledge of Marin’s death), but she has no way to stop the drowning. After Johannes disappears into the depths of the sea, Nella spots Otto. The pair return home to Otto’s new child and Cornelia, and Nella finds one last miniature on the doorstep. It is a tiny doll of the baby. She places it in her miniature house and sits down at Johannes’s desk to take over his business. Time to sell some sugar.