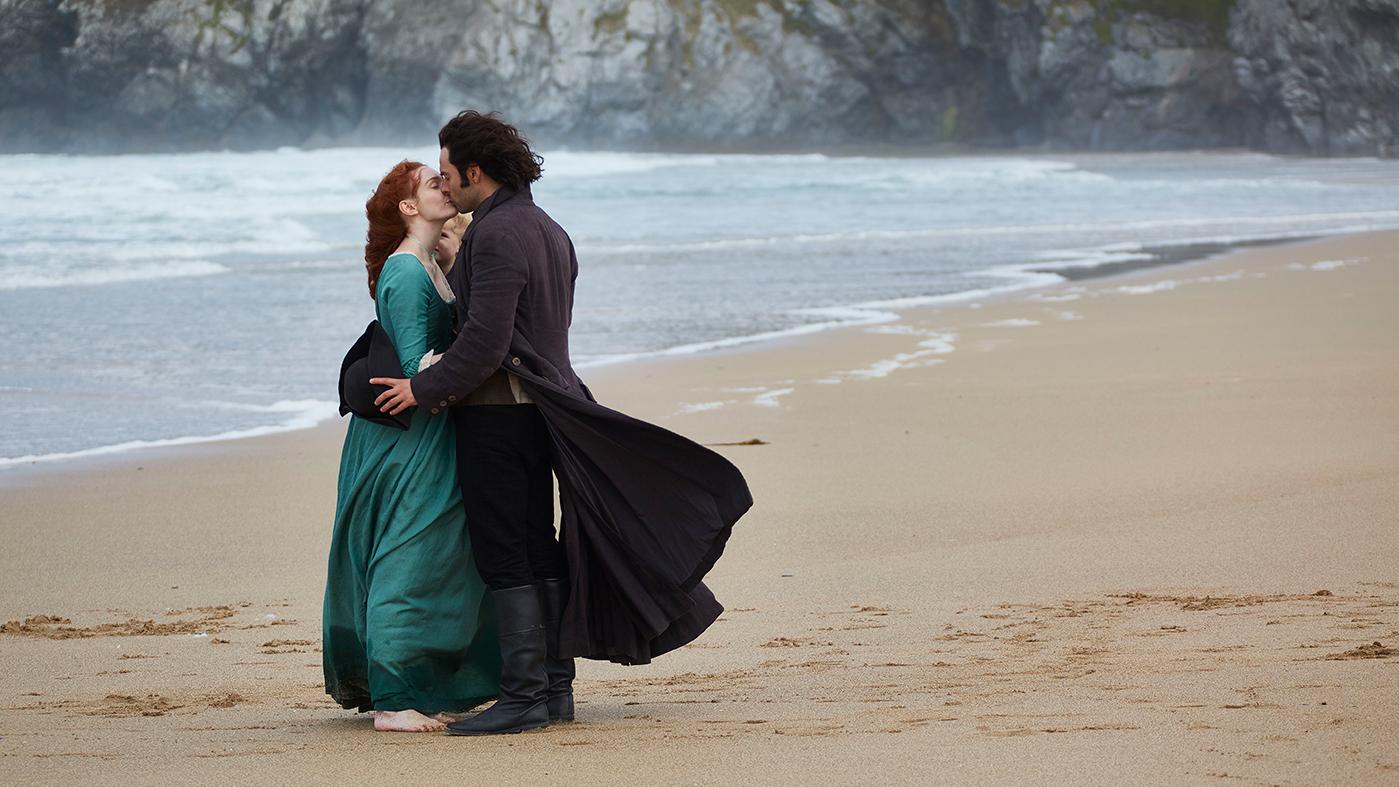 Demelza and Ross are still together, and resolve to do better – but will they? Photo: Mammoth Screen for BBC and MASTERPIECE

Poldark airs Sundays at 8:00 pm and is available to stream. Catch up with recaps from season 3, and recap episode 2 of season 4 here.

Poldark is back! This season, we divide our time between the picturesque village of Sawle atop the craggy cliffs of Cornwall, and the extravagant hedonism of late-18th century London. Get ready for plenty of foolish heroics, disastrous decisions, heartbreaking tragedy, exhilarating triumph, gripping suspense, and good versus evil…plus a really cute dog!

When we last left Ross and Demelza, their marriage was in crisis. Demelza was certain that Ross was still involved with his first love Elizabeth (after a rage-filled one-night stand with Ross, she had nonetheless married his archenemy George Warleggan, Member of Parliament). Demelza, for her part, had just yielded to the advances of the dishy but frail Hugh Armitage (likewise, a one-time “pity/revenge” event). After Elizabeth threatened to leave him, George vowed to her that he would no longer question the paternity of their son Valentine (who looks an awful lot like Ross), but can he keep his promise? And will Elizabeth stop sending mixed messages to Ross? 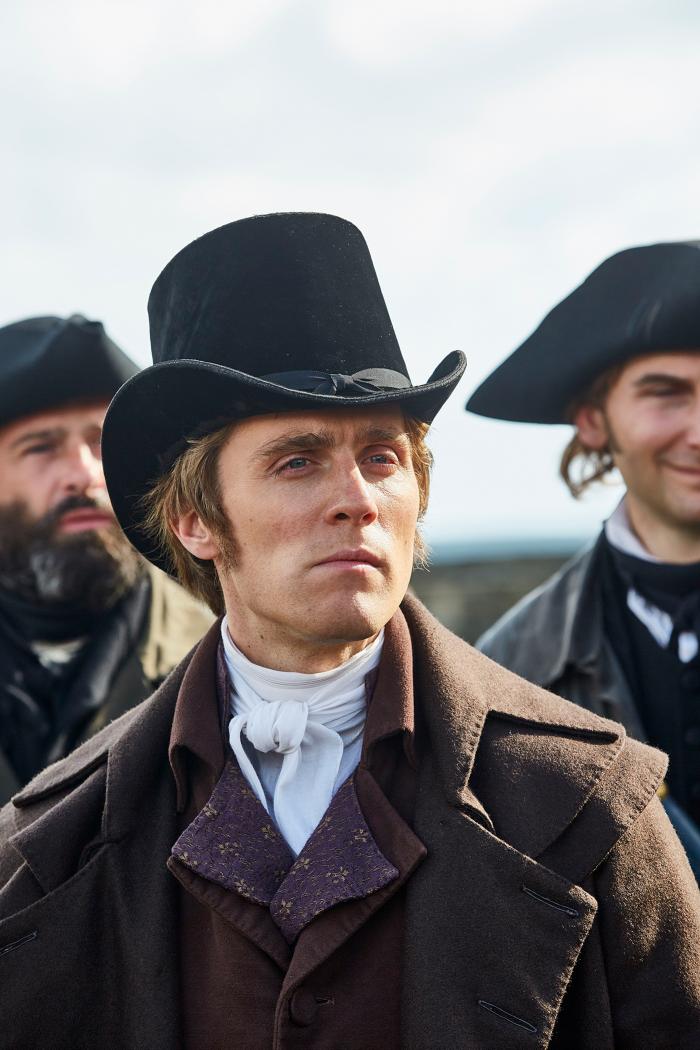 As usual George is livid... about pretty much everything. Photo: Mammoth Screen for BBC and MASTERPIECE Demelza’s handsome brother Drake, the town blacksmith, continued to pine for poor, abused Morwenna, who had been forced by George to marry obsequious foot fetishist (and Reverend) Ossie Whitworth. Morwenna, desperate to keep Ossie out of her bed – and presumably, away from her feet – bluffed that she would murder their infant son. (Pretending to be crazy has been working for her, so far.) Ossie took up with Morwenna’s conniving sister Rowella, who blackmailed him and used the proceeds to marry lowly librarian Arthur Solway. Ross’s best friend, Dr. Dwight Enys, having recovered from his prisoner-of-war trauma, settled down with his wife, wealthy heiress Caroline, and their adorable pug, Horace. And Demelza’s other brother Sam, a pious Methodist preacher, was still hopelessly attracted to the bawdy Emma.

Got all that? Here we go…

We begin underwater in the ocean just off Hendrawna Beach – a man swims by overhead, clad only in breeches, then strides moodily ashore through the booming surf. The scriptwriter must have been reading the fan message boards, because it’s Ross, dripping wet and glorious. As he fantasizes about Demelza’s encounter with Armitage, his wife appears in reality, making her way barefoot down the dune with their two children – young Jeremy running to his papa, and Demelza toting their flaxen-haired daughter Clowance. Yep, they’re still together, as the opening credits roll.

Cut to London, circa 1796, and a volatile session of Parliament. Prime Minister William Pitt calls for a special election, which could unseat many of the Members. We later see George venting about it to his dissatisfied patron, Sir Francis Bassett, when they encounter Bassett’s rival-in-power, Lord Falmouth, with his nephew Armitage in tow. Falmouth informs them that Armitage is throwing his hat in the ring for George’s seat. George is livid, his usual state. 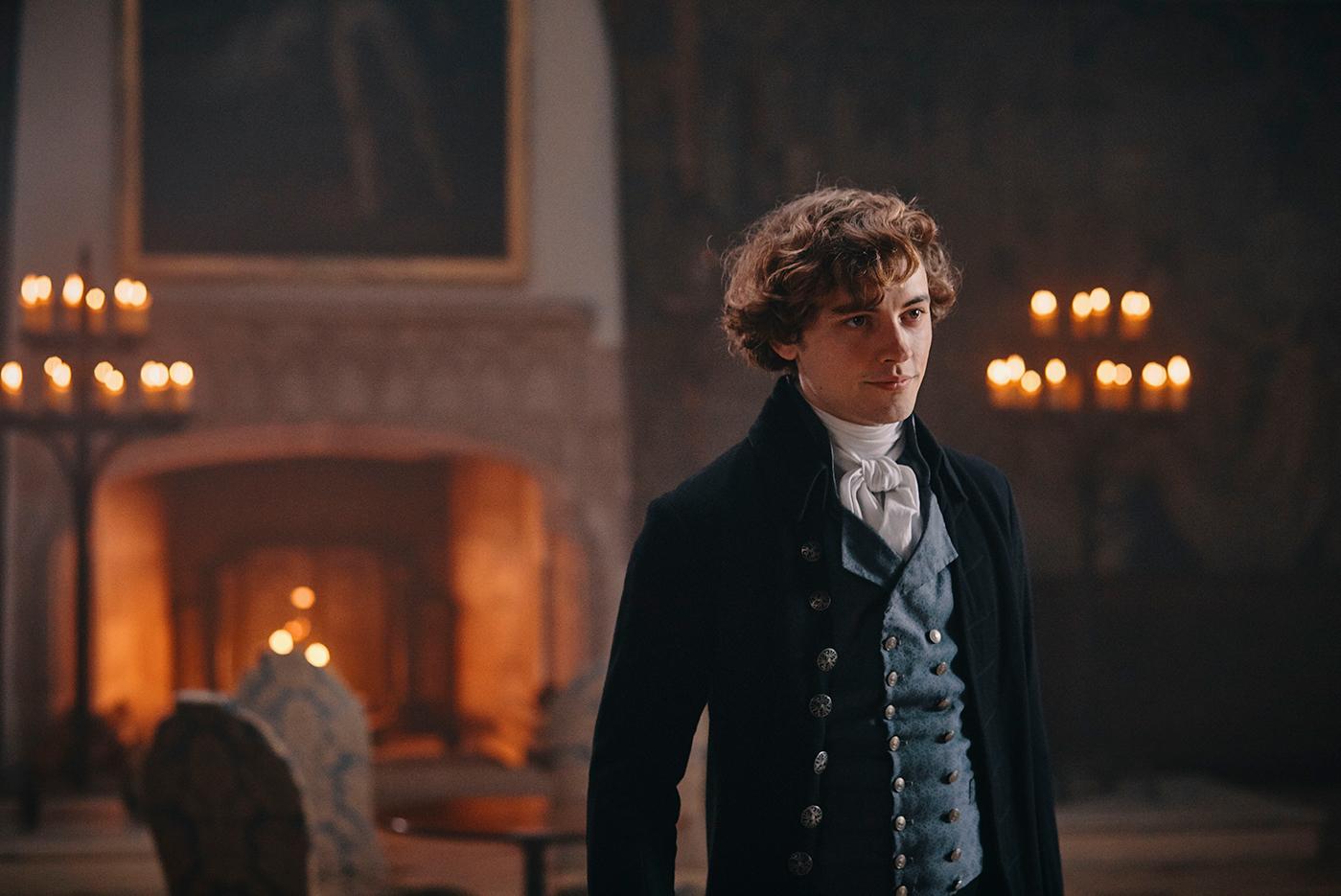 Armitage is suffering from migraines and worsening eyesight, but he's still writing love letters to Demelza and may run against George in Parliament. Photo: Mammoth Screen for BBC and MASTERPIECE

Armitage, suffering from migraines and worsening vision, is still writing sappy love poems to a conflicted Demelza. At Nampara, servant Prudie debates with herself whether to give Demelza the latest one, but leaves it on the table.

At Ross’s mine, we meet Zacky Martin’s hotheaded son Jago, who complains bitterly to Ross and Zacky about merchants exporting grain needed to feed the starving poor, who are becoming desperate.

Ross, Dwight, and Caroline watch Demelza and her children happily frolicking on the beach. Caroline, previously dismissive about having children, appears to be wavering. Dwight is surprised and pleased. By all indications, Demelza is warming toward Ross as well.

Cut to a ceremony in the cemetery, where a sanctimonious Ossie is saying a prayer over Aunt Agatha’s newly installed headstone. Drake lurks on the sidelines, mooning at Morwenna, and afterward there is discussion of the escalating unrest in the village. Bassett urges George to “read the riot act” to any dissenters, and then invites himself and his wife over to Ross and Demelza’s home for tea. Ross smilingly accepts, and the next scene finds Demelza, Caroline, and the Poldarks’ servant Prudie frantically straightening up in advance of the visit. “I could crown Ross!” fumes Demelza. As she clears the table, she finds Armitage’s poem. She slips upstairs to read it, hastily hides it, and later burns it. 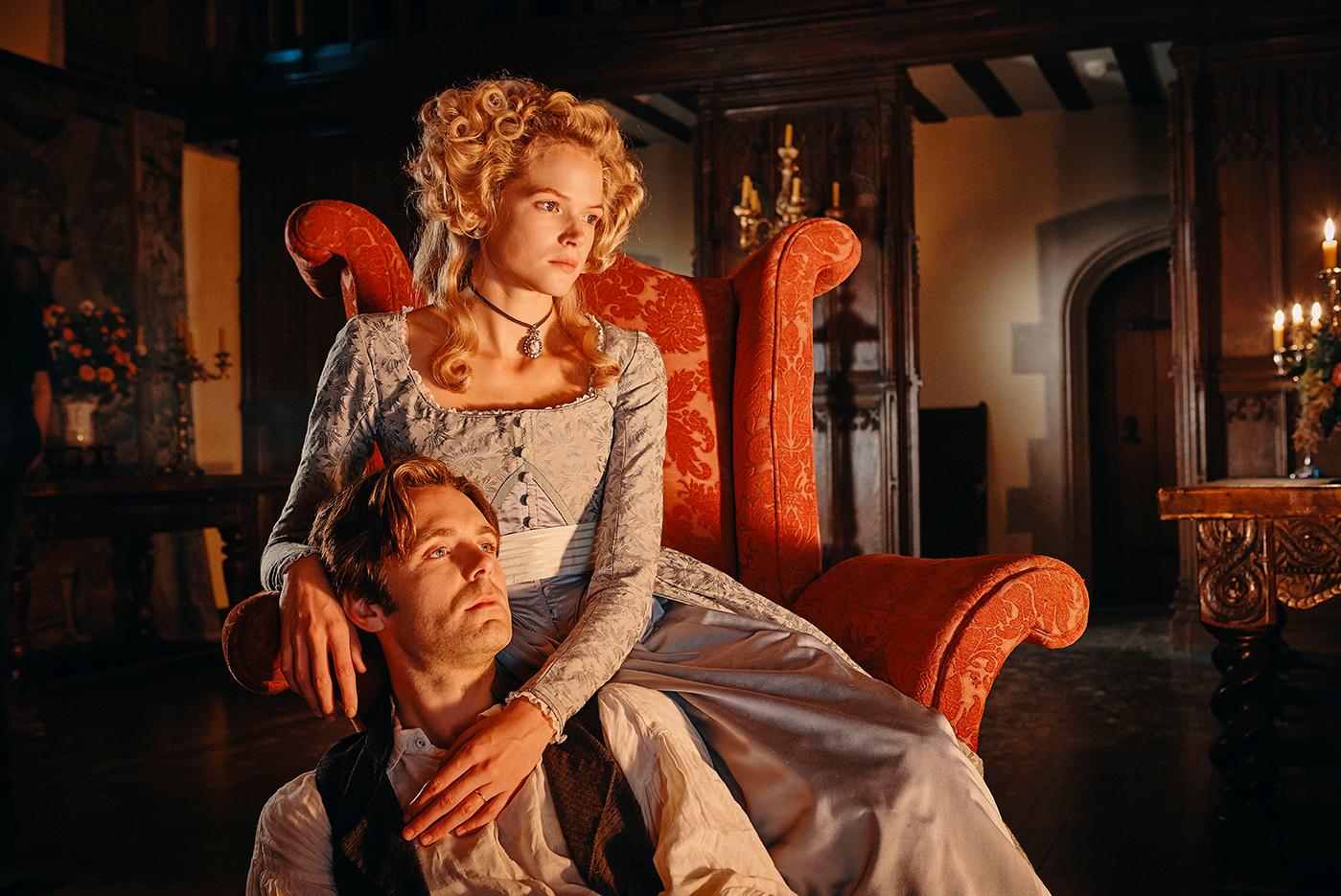 Caroline and Dwight are taking a new step in their family and relationship. Photo: Mammoth Screen for BBC and MASTERPIECE

Elizabeth tells George she is worried about an uprising – with good reason, as we cut to the quay where the angry townspeople are squaring off against the exporters and law enforcement, with Jago Martin one of the main instigators. In the melee, Jago decks a grain merchant, who is killed in the fall. Sam and Drake vainly attempt to break up the fight. George’s thuggish servant Tom Harry sees them in the thick of it and, knowing George has it in for anyone related to Ross, hurries to Trenwith to tip him off about the riot and falsely accuse Sam and Drake.

Bassett shares with the landowners a list of the accused; Jago, Drake, and Sam are on it, and Ross and Dwight offer to arrest them themselves rather than leave them to George’s thugs. Ross promises that he will stand up for them in court, but he and Dwight arrive late, as George has maliciously moved up the time of the trial, and they can only watch as Jago, Drake, and Sam are sentenced to death by hanging. Ross is not giving up without a fight, however, and he asks Dwight to keep Demelza in the dark about her brothers’ plight. Dwight thinks this is a bad idea (this will be a recurring theme).

As George smugly looks on, Ross appeals to an unyielding Bassett for leniency. Meanwhile at the vicarage, Ossie gripes to Morwenna about having to pray for some “Methodist” rioters being executed. Later, fearing that one of them could be Drake, she slips away to find out.

To keep Demelza away from the hanging, Ross urges her to accompany the Enyses on a visit to Falmouth and Armitage, whose headaches are getting worse. Dwight now doubts that Armitage is well enough to stand for Parliament. Demelza suggests to Falmouth that he mend fences with Bassett so they can unite behind another candidate to defeat George. Falmouth scoffs at the notion, but is intrigued. Later, Armitage tries to manipulate Demelza into resuming their affair, but resolutely, she breaks it off for good. 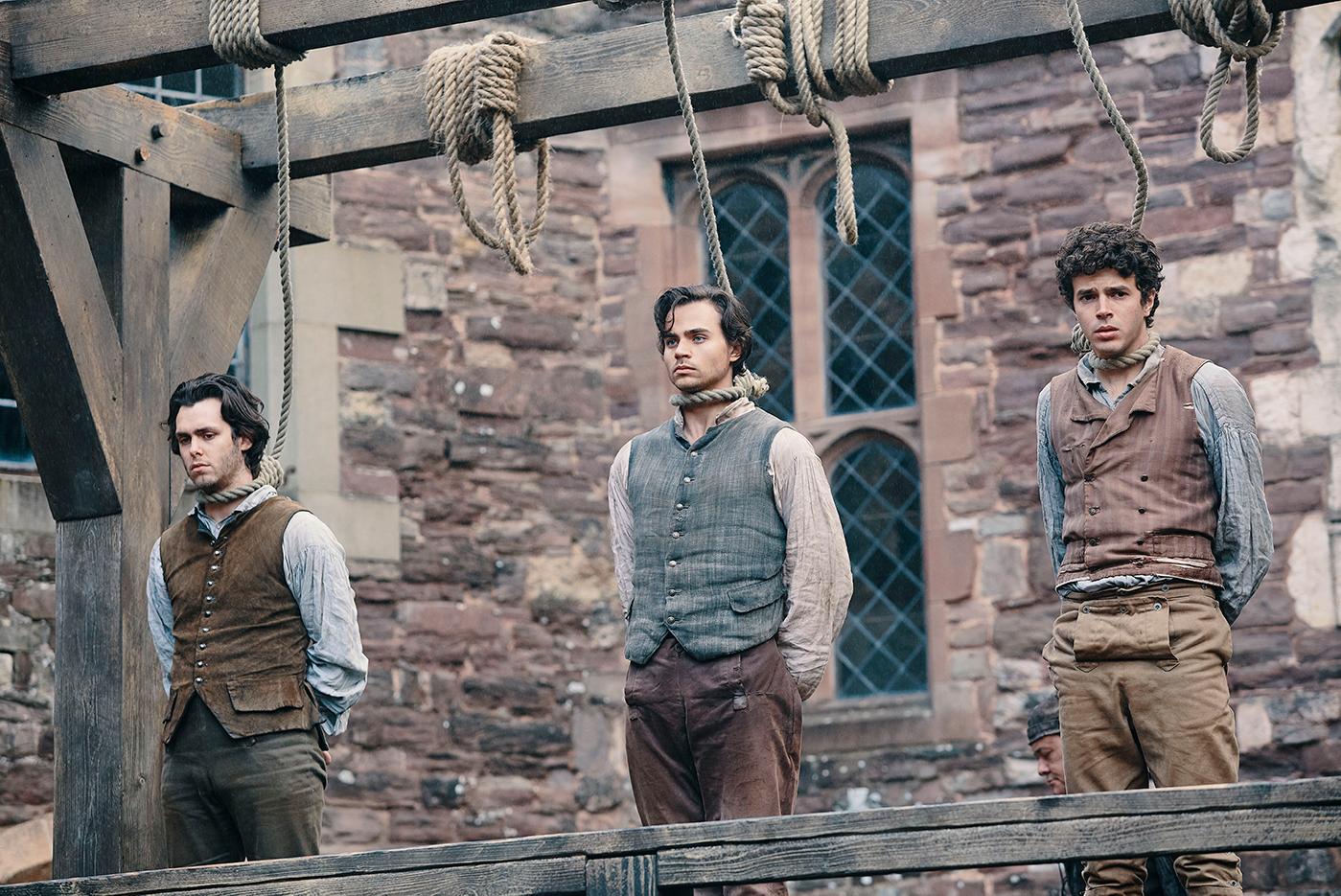 Sam and Drake find themselves in grave danger after an uprising over grain. Photo: Mammoth Screen for BBC and MASTERPIECE

Back in the village, the hanging is about to commence. Jago swears that Drake and Sam are innocent, and Ross delivers an impassioned speech to the magistrate and the crowd, arguing for compassion. It works, and Drake and Sam are reprieved – but not Jago, who hangs. Zacky is devastated as Ross tries to comfort him. Drake locks eyes with a hooded Morwenna at the back of the crowd before she quickly decamps, making it back to the vicarage moments before a suspicious Ossie arrives to check on her.

Dwight suggests to Ross that he ought to consider running for Parliament after all, as Armitage is unfit. That night by the fire, Dwight muses to Caroline how ironic it is that the “more robust” Armitage is failing while he himself grows stronger. Caroline asks, meaningfully, if he is “strong enough to consider an addition to their household.” Yes, she’s pregnant, and Dwight is jubilant. Horace is not so sure.

Ross finally tells Demelza about the hanging, now that her brothers have been saved. She is, to say the least, relieved. Later, Ross admits that he may have taken her for granted; Demelza thinks there is some blame on both sides. Together, they resolve to do better. But will they?