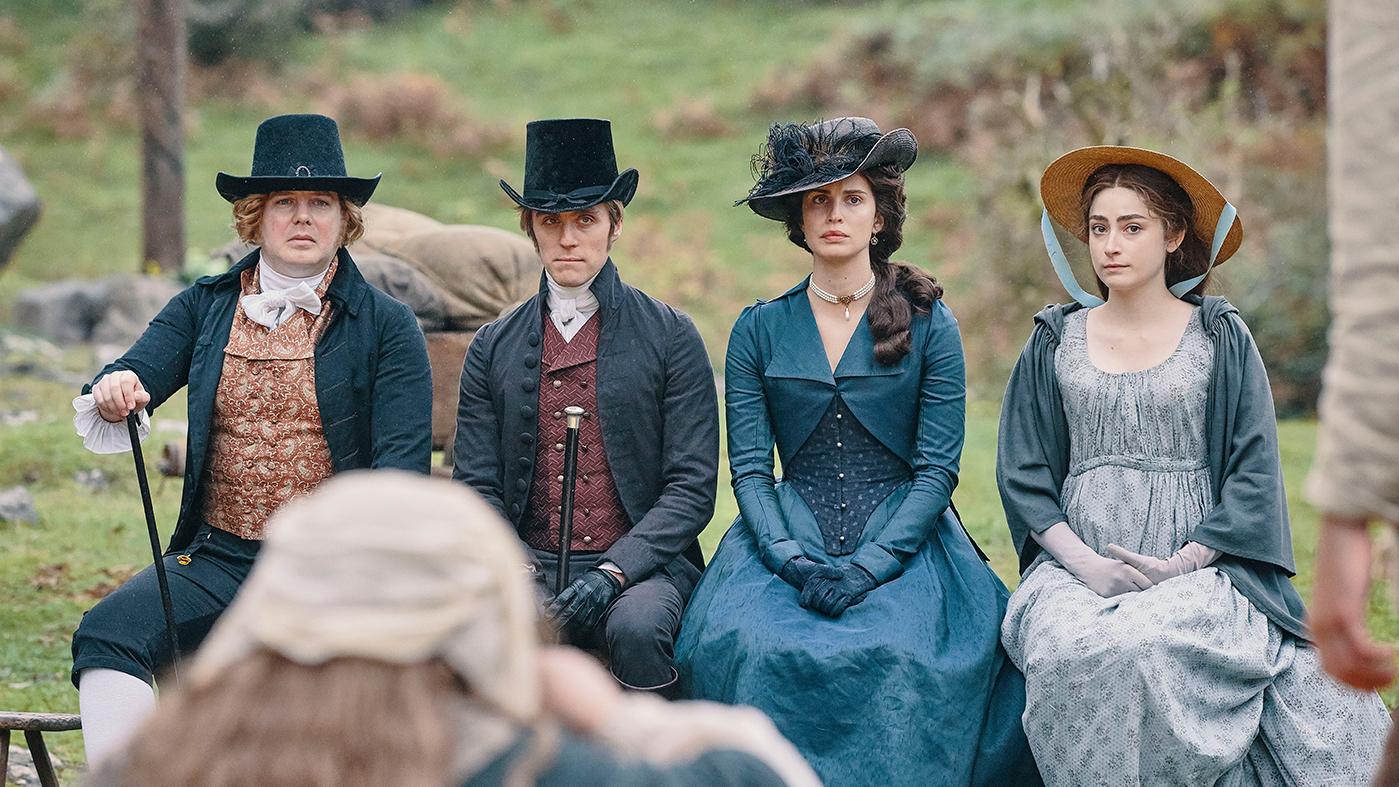 Two fraught relationships, in case you couldn't tell by their faces. Photo: Mammoth Screen for BBC and MASTERPIECE

Ross and Demelza are strolling along a country road with their children when a large stagecoach labeled “Falmouth-London-Cornwall-Truro” rumbles by. “How far is London?” asks young Jeremy. “Feels like the end of the earth,” replies Demelza, with a plaintive glance at Ross. Foreshadowing?

Cut to a pallid Hugh Armitage, languishing in bed at his uncle Falmouth’s estate; his headaches are worsening and he asks Dwight for stronger drugs. Dwight, always the voice of reason, is more interested in investigating a cure. As Dwight cannot guarantee to Falmouth that his nephew will be recovered by next week’s Parliamentary election, Falmouth will find another doctor who can. 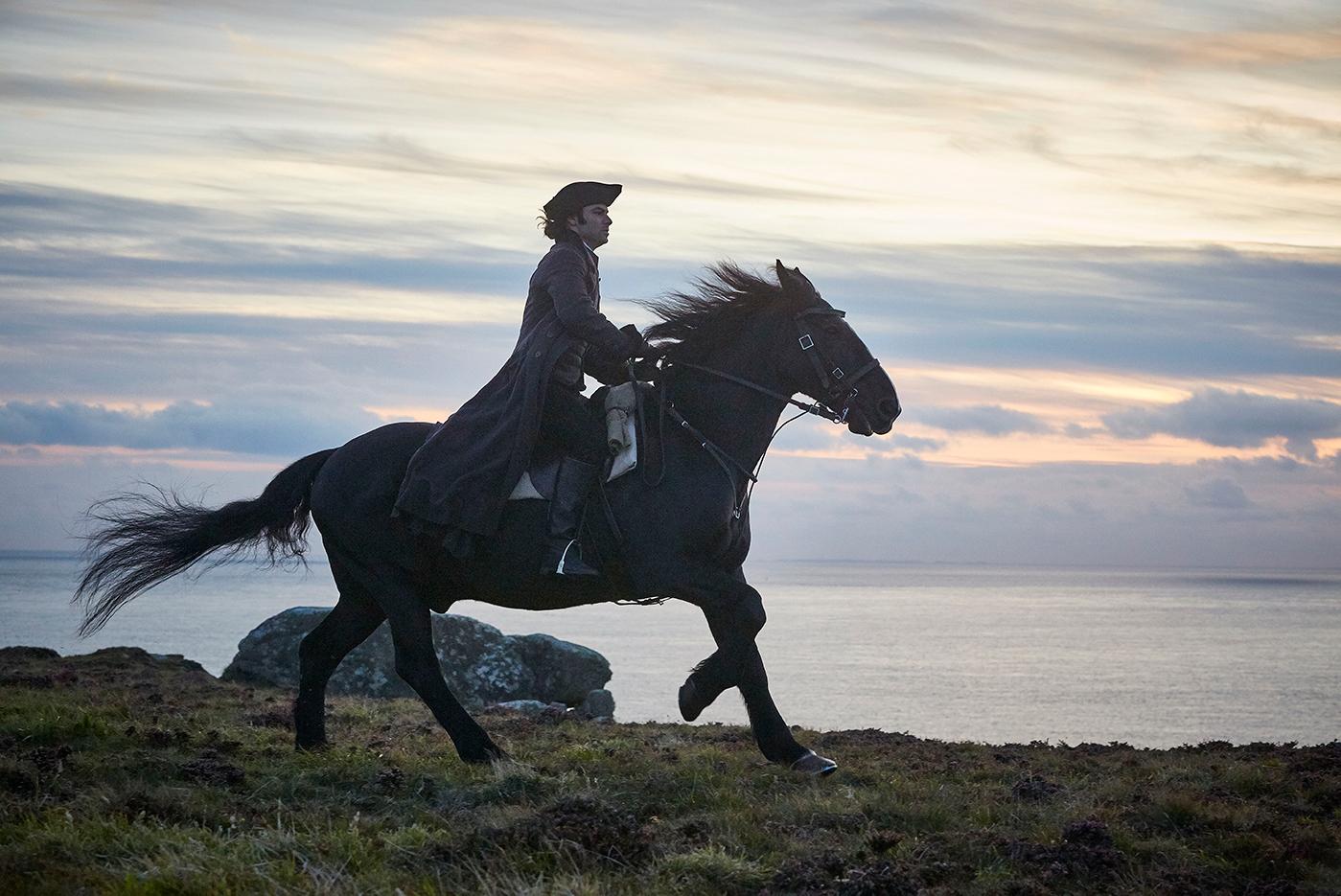 Ross, always dashing around on a horse. Photo: Mammoth Screen for BBC and MASTERPIECE

Ross, Demelza, and the villagers are preparing for the St. Sawle’s Day festival as Caroline and Dwight arrive. Armitage has been left to the mercies of another doctor, Dwight tells Ross and Demelza, which is the kiss of death on this show. But no matter, Dwight continues, grinning meaningfully at Caroline…he will be occupied with “other patients, some closer to home.” Reluctantly, Caroline announces an upcoming “Enys-Penvenen offshoot.” Jubilant embraces all around, although Caroline, flippant as usual, insists, “Of course I don’t want the brat.” Nobody believes her, and Dwight and Ross head off for a celebratory drink. Caroline, for her part, recruits Demelza for a mysterious mission, Lucy-and-Ethel style.

At the fest’s wrestling arena, Drake and Sam are taunted by the hulking brute Tom Harry as Sam’s hopeless crush Emma watches. Tom Harry challenges Sam to a wrestling match; Emma hints that she might give Sam’s church (and presumably, Sam) a chance if he competes and wins. Sam impulsively accepts. The onlookers are worried – Sam has never wrestled and Tom Harry outweighs him by at least 40 pounds (and will undoubtedly cheat).

Over tea, Caroline and Demelza agree that George must be booted from Parliament, and that if Armitage won the seat he would be kept away from Demelza. How to kill these two birds with one stone? This: Caroline has also invited Bassett to tea, and shortly thereafter, to both mens’ surprise and discomfiture, they are joined by his archrival Falmouth, as Caroline pretends to have foolishly confused the dates. The two Lords initially butt heads, but the ladies cleverly ply them with brandy and steer the conversation toward their mutual distaste for George. Will Bassett and Falmouth bury the hatchet and band together to unseat him? 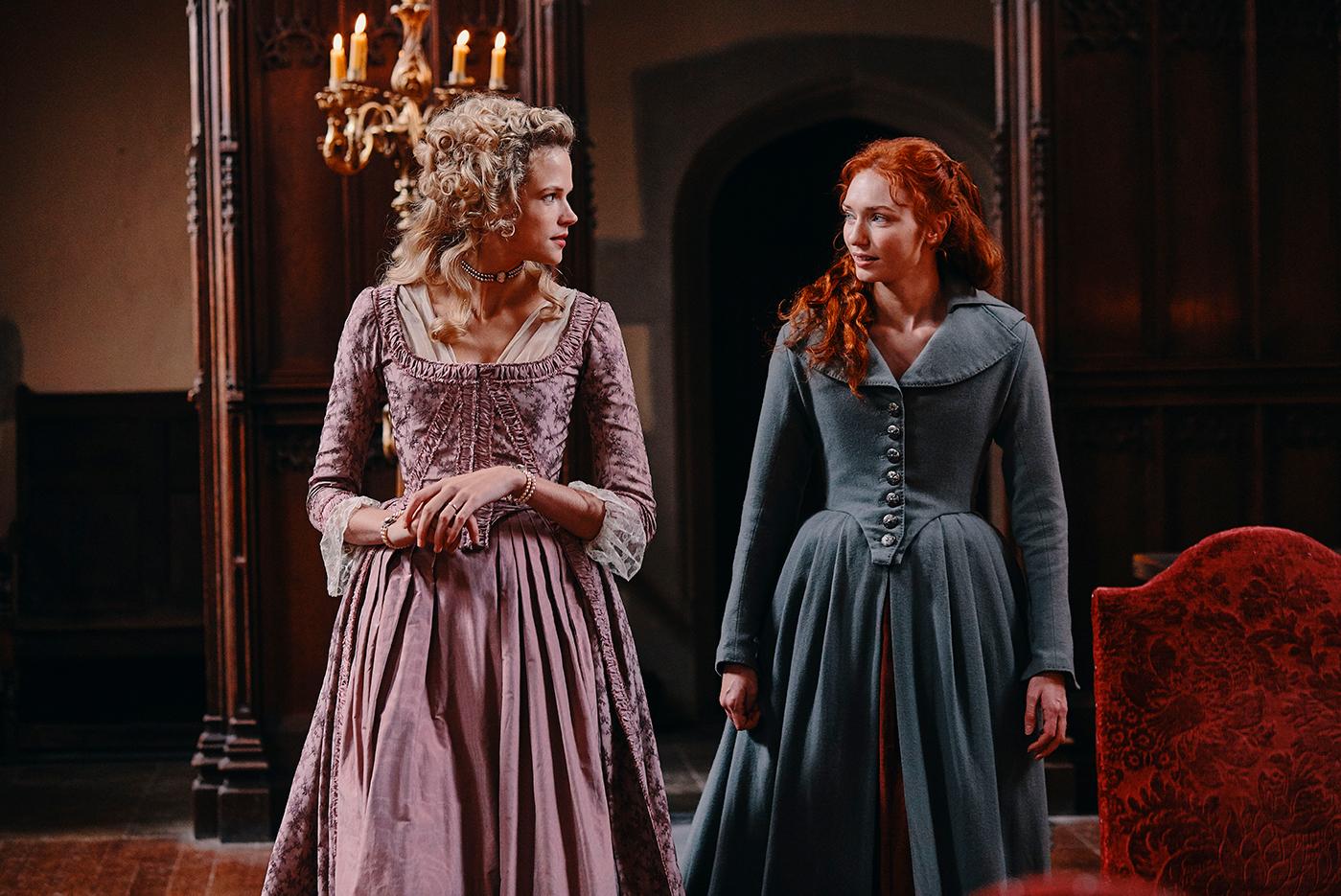 Caroline and Demelza scheme to remove George from Parliament and keep Armitage away from Demelza. Photo: Mammoth Screen for BBC and MASTERPIECE

George is reluctantly lunching at the pub with Ossie as Ross and Dwight dine at a nearby table. George attempts to bait Ross with the news of Sam’s upcoming wrestling match, proposing a wager on the result; Ross agrees – the loser’s share will go to Truro’s new hospital. As he leaves, George can’t resist lording his Parliamentary status over Ross – not a smart move.

Armitage is having serious misgivings as the pompous Dr. Choake unpacks a daunting arsenal of medical torture devices, outlining a treatment plan of “blistering, purging, vomiting, poulticing, and bleeding.” Later, Falmouth is horrified to find his nephew glazed over, covered in leeches, and sporting new pepperoni-like spots all over his chest, as Choake prepares to drill into his skull. Alarmed, Falmouth hastily summons Dwight again.

Ross serves as Sam’s wrestling coach; after an arduous practice session, an achy Ross soaks in a hot bath and Demelza flirtatiously helps him “wash.” One thing leads to another... 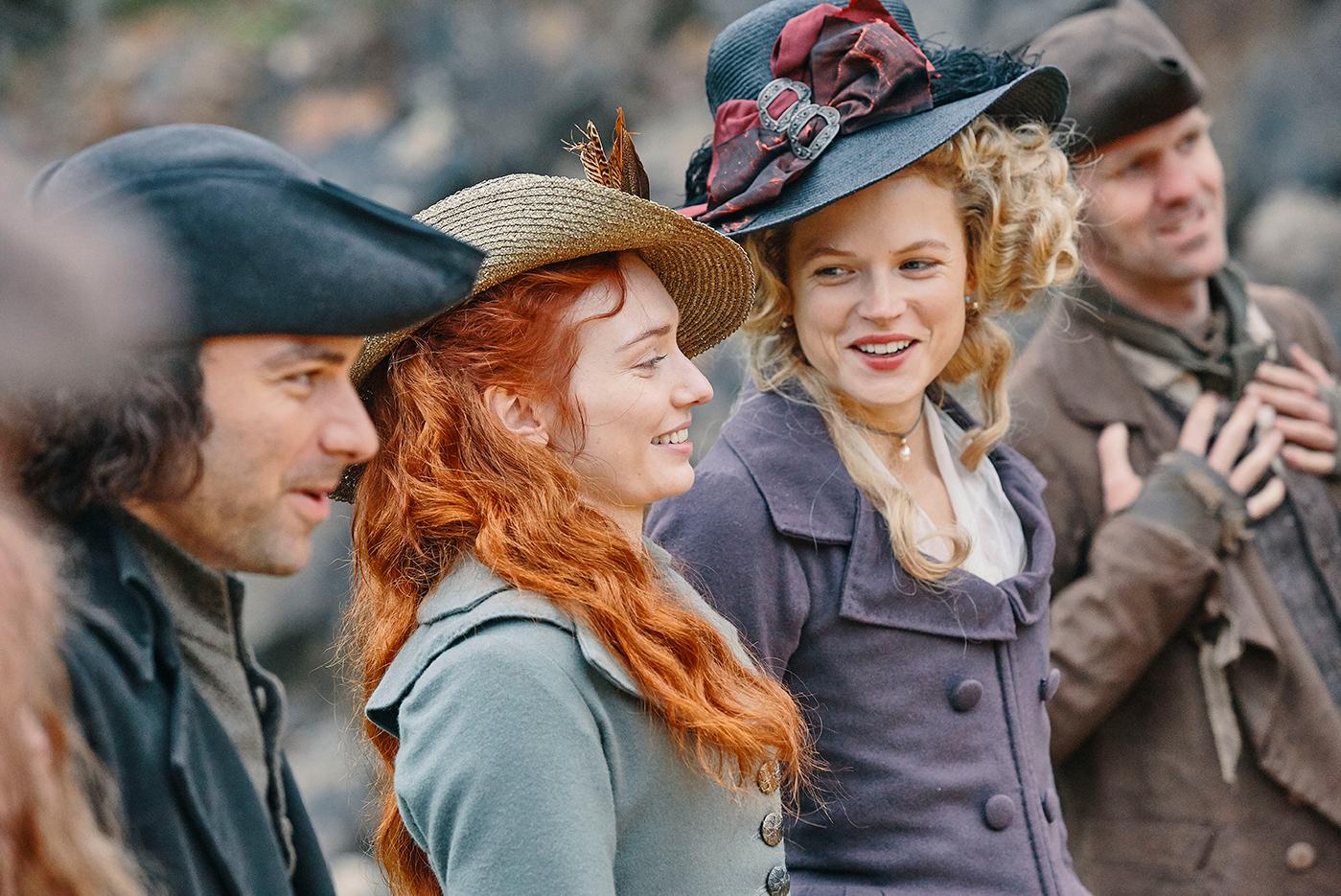 Caroline and Demelza make an effective team – and soon they'll be able to have their children play together, since Caroline is expecting. Photo: Mammoth Screen for BBC and MASTERPIECE

On St. Sawle’s Day, seemingly the whole town assembles to watch Sam take on Tom Harry. Sam wins the first bout, but in the second, Tom Harry illegally gouges Sam’s eyes with his thumbs, besting him. Sam appears to have the upper hand in the deciding bout, until Tom Harry whispers that Sam is “welcome to Emma’s soul” as he’s “already had her body.” Sam, distracted, is taken down hard and loses the match. Tom Harry celebrates his win by getting completely wasted, whereupon a grossed-out Elizabeth prevails upon George to fire him once and for all. Morwenna wanders off by herself and has a brief conversation with Drake, but they are rudely interrupted by Ossie.

Dwight, baffled by Armitage’s quick decline (could he really be dying of a broken heart?), has sent for Ross and Demelza. He and Ross leave Demelza alone at Armitage’s bedside, where Armitage slips her one last poem. Falmouth takes Ross aside and, as Armitage is clearly unfit, asks him to run for George’s seat. After conferring with Demelza, Ross reluctantly agrees. Back home, Demelza is reading Armitage’s poem when she is interrupted; Ross later finds and reads it.

Dining with George, Cary, and Elizabeth, Ossie gleefully blurts out the news that George’s opponent will not be Armitage, but Ross. Predictably, George is apoplectic. He, Elizabeth, and Cary scheme to influence the electors, many of whom have outstanding loans at George’s bank. 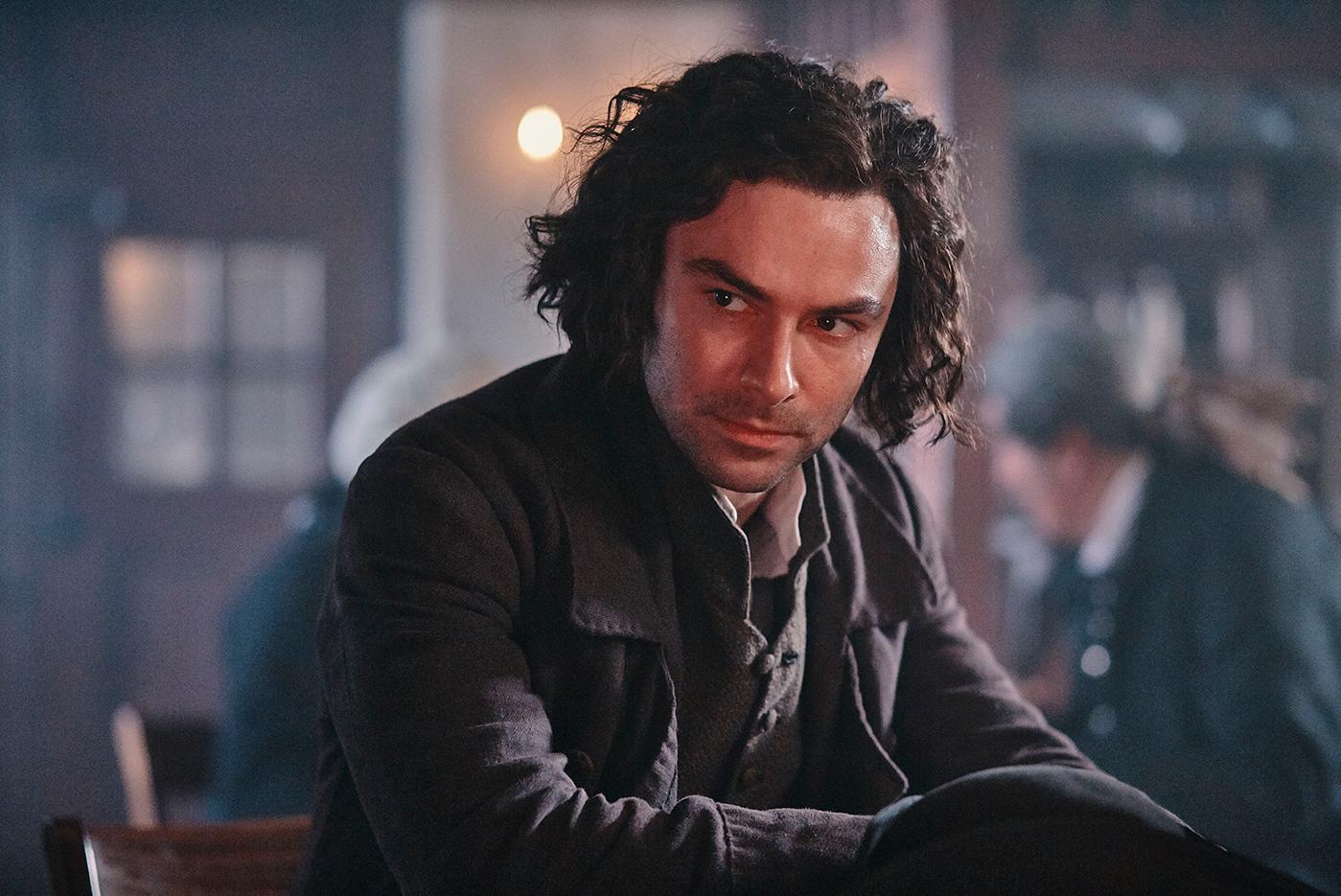 Ross always finds more ways to annoy George, like running for his seat in Parliament. Photo: Mammoth Screen for BBC and MASTERPIECE

Demelza is back at Armitage’s bedside as everyone else convenes for the Parliamentary vote. Falmouth nominates Ross for the seat as an inscrutable Bassett watches. As the electors orally cast their votes, it looks to be a landslide in George’s favor until Bassett steps forward and votes for Ross. The tide turns, and to everybody’s surprise, Ross is elected by one vote. Shocked, George, Cary, and Elizabeth furiously decamp. Later, a somber Falmouth congratulates Ross on his victory, breaking the news that Armitage has died.

Emma seeks out Sam to set the record straight – Tom Harry lied, she’s still a virgin, and she’s going away for a year to work as a servant in Bassett’s household. Perhaps they’ll meet again after that. Sam promises to wait.

Ossie is once again sucking on the toes of his bored prostitute, and afterward, he bumps into his former flame Rowella; it turns out that she was mistaken – she wasn’t pregnant with his child after all. As Ossie seethes over the hush money she extorted from him, Rowella leaves…with a seductive glance that suggests her manipulation of him isn’t over.

Caroline attempts to console grief-stricken Demelza, who later returns home to Ross. They attempt to achieve some closure over the Armitage affair. Gently, Ross reveals that, against all odds, he won the election. On the same rural lane where the episode began, Ross bids Demelza and the children goodbye and boards the coach for London to take his seat in Parliament. What has he gotten himself into?