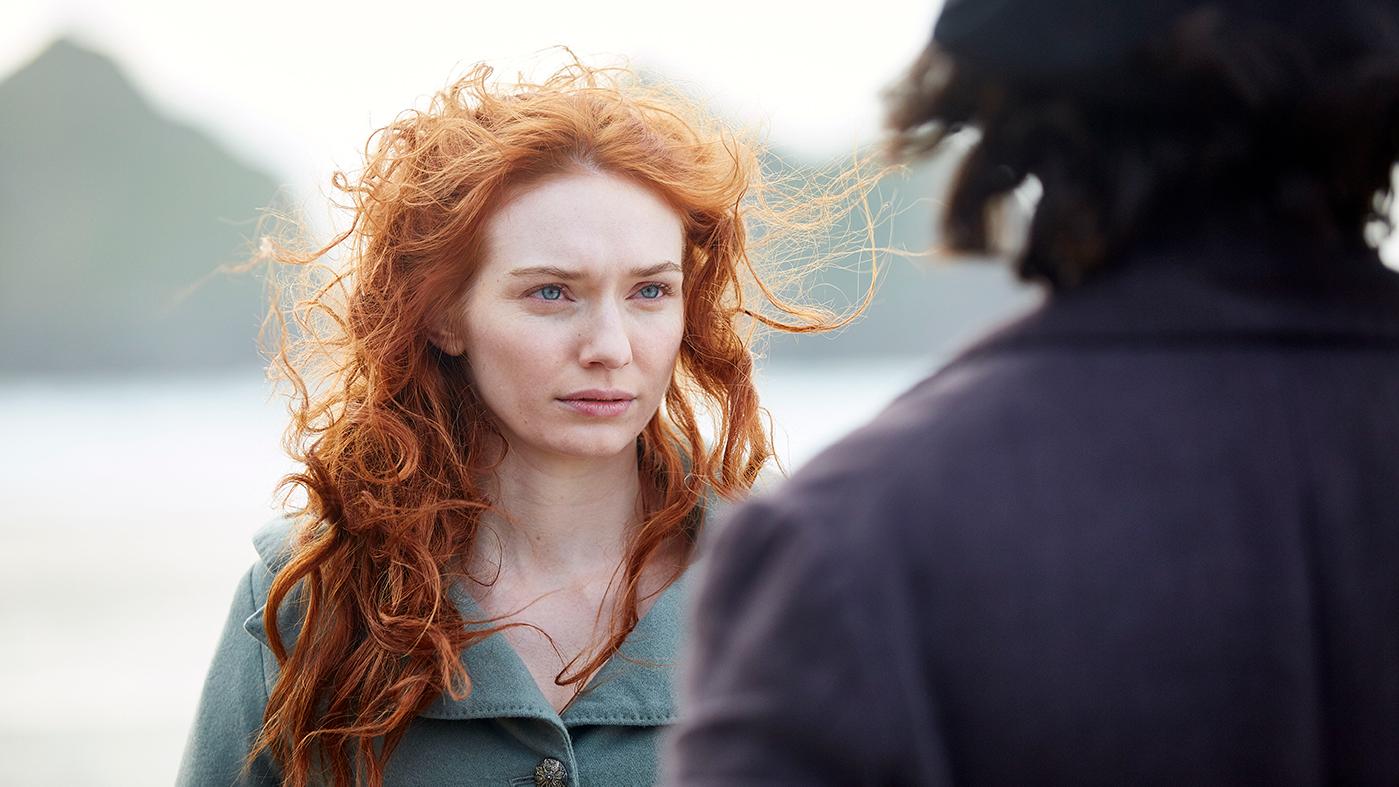 Ross still won't let Demelza's fling with Armitage go, despite his own transgressions. Photo: Mammoth Screen for BBC and MASTERPIECE

Summer on the beach. Demelza, Sam, Drake, and the children are playing a spirited game of Blind Man’s Bluff as Ross, Prudie, and the Enyses look on. Caroline, lounging on a blanket with baby Sarah, facetiously claims that she “lives for the day when the little beast runs away; [she] shan’t miss her at all.” Dwight, normally amused by Caroline’s jibes, turns away, struggling to compose himself. Caroline doesn’t notice, but Ross does. Dwight, killing us all, later stands at the cliff’s edge at sunset, cradling baby Sarah. “Be not in haste to leave us, little one,” he whispers as she gazes solemnly up at him. “Stay a while longer.”

George is teaching Valentine the values of various coins (this is George’s main source of fun). Elizabeth worries about cost of the borough George recently bought, money he would not have had to spend if Bassett and Falmouth had not joined forces against him. She has heard it was Demelza who convinced the two lords to end their feud. George lambastes “that impudent kitchen trull” who deprived him of “his rightful place in Parliament.”

Demelza, preparing for bed, wonders if the damage Armitage wreaked on their marriage can be repaired; Ross assures her it already is. But as we see him at Falmouth’s staring at Armitage’s portrait, it’s clear he’s not so sure. Falmouth implies that as Ross is his protégé, he expects him to vote for some of his pet projects. Ross should have seen this coming.

Ossie is once again at Nat Pearce’s bedside; the man refuses to die. Ossie gets him to reveal the names of all the Pascoe accountholders from whom he embezzled; this information is, of course, passed along to George and his uncle Cary, who can’t wait for Pearce to “bite the dust” so they can take out Pascoe’s Bank, and with it, Ross’s savings. 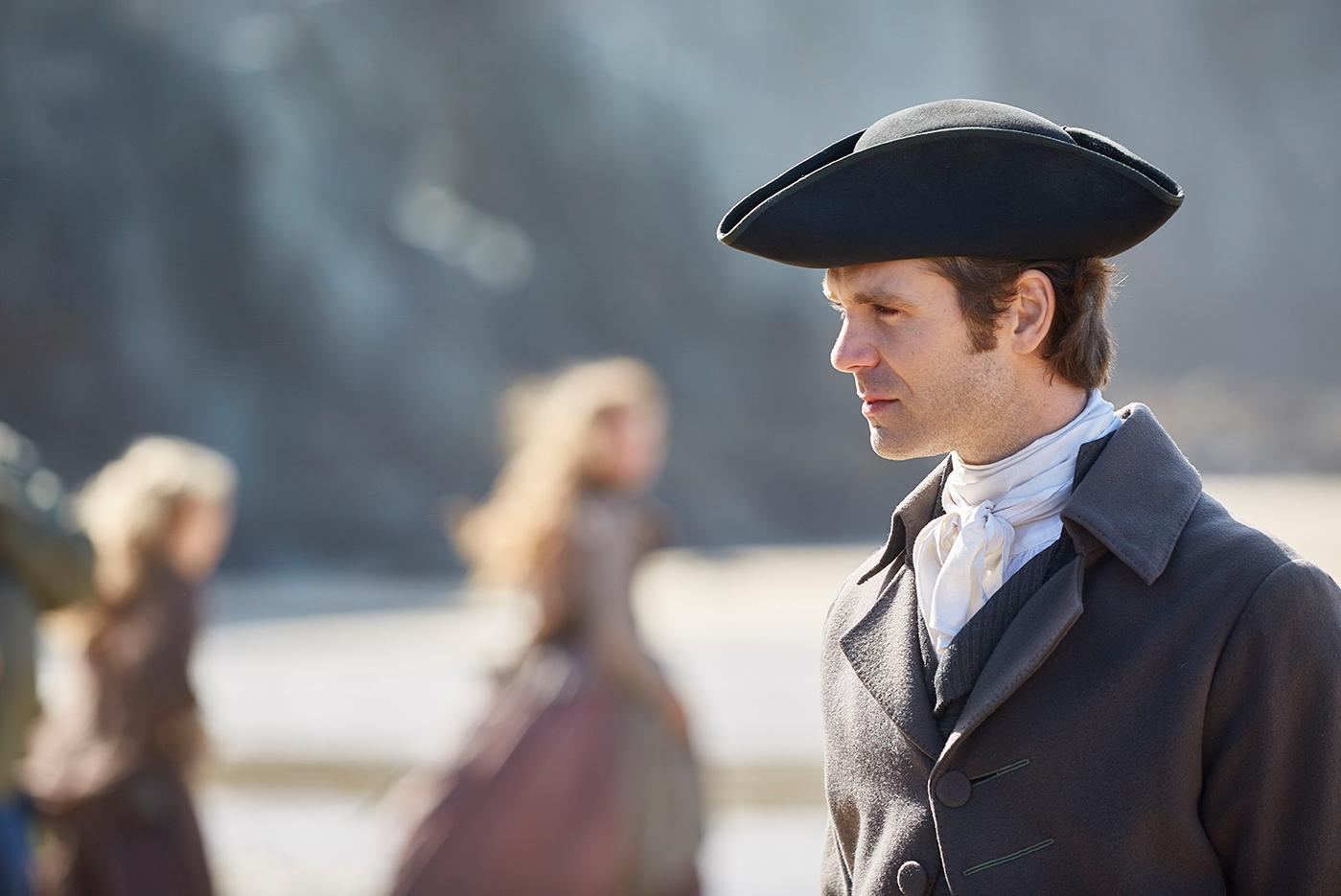 Dwight knows something tragic about his child, but he's not sharing it. Photo: Mammoth Screen for BBC and MASTERPIECE

Ross quizzes Dwight about his melancholy behavior on the beach. Reluctantly Dwight reveals, choking back tears, that Sarah has a congenital defect of the heart and the first mild illness she comes down with will be her last. He can’t bring himself to tell Caroline, and begs Ross not to tell Demelza either.

At the vicarage, Elizabeth and Geoffrey Charles are visiting “his old governess” Morwenna, her son John Conan on her lap. A hatchet-faced nurse strides in and yanks the child from her, bearing him away without a word. Elizabeth thinks it strange that this is the fourth new nurse in a year. Lady Whitworth is in charge of the hiring and firing, Morwenna informs them, adding grimly, “Osborne is a strange man.”

Cut to the “strange man” himself who, having just had his way with Rowella at her home, flings more money at her, calling her a “vile, acquisitive harlot.” Leaving, Ossie runs into Elizabeth just coming to visit; he makes a lame excuse and hurries away. Elizabeth is baffled, as is Rowella’s husband Arthur coming down the street, who can’t imagine what Ossie would want with his wife.

Drake is at work in his smithy when Geoffrey Charles comes to visit. Drake has had to put Morwenna in the past, he tells his friend. Rosina passes by and Drake waves; a good sign. Later at home, Demelza pushes Drake at a departing Rosina again; this time, he is agreeable. As they approach the village, Rosina warns him that if they are seen together, people will think they’re courting. Drake, coming to a decision, blithely declares, “Let folk think what they like.” Rosina is thrilled, and they journey on.

At the pub, Dwight is lost in thought when Ossie intrudes on him to tell him that Morwenna must be insane, given her frigidity, and that he needs a doctor to sign off on having her locked up. Dwight, clearly siding with Morwenna, excuses himself, retorting that he hopes Ossie won’t find anyone to go along with his scheme. 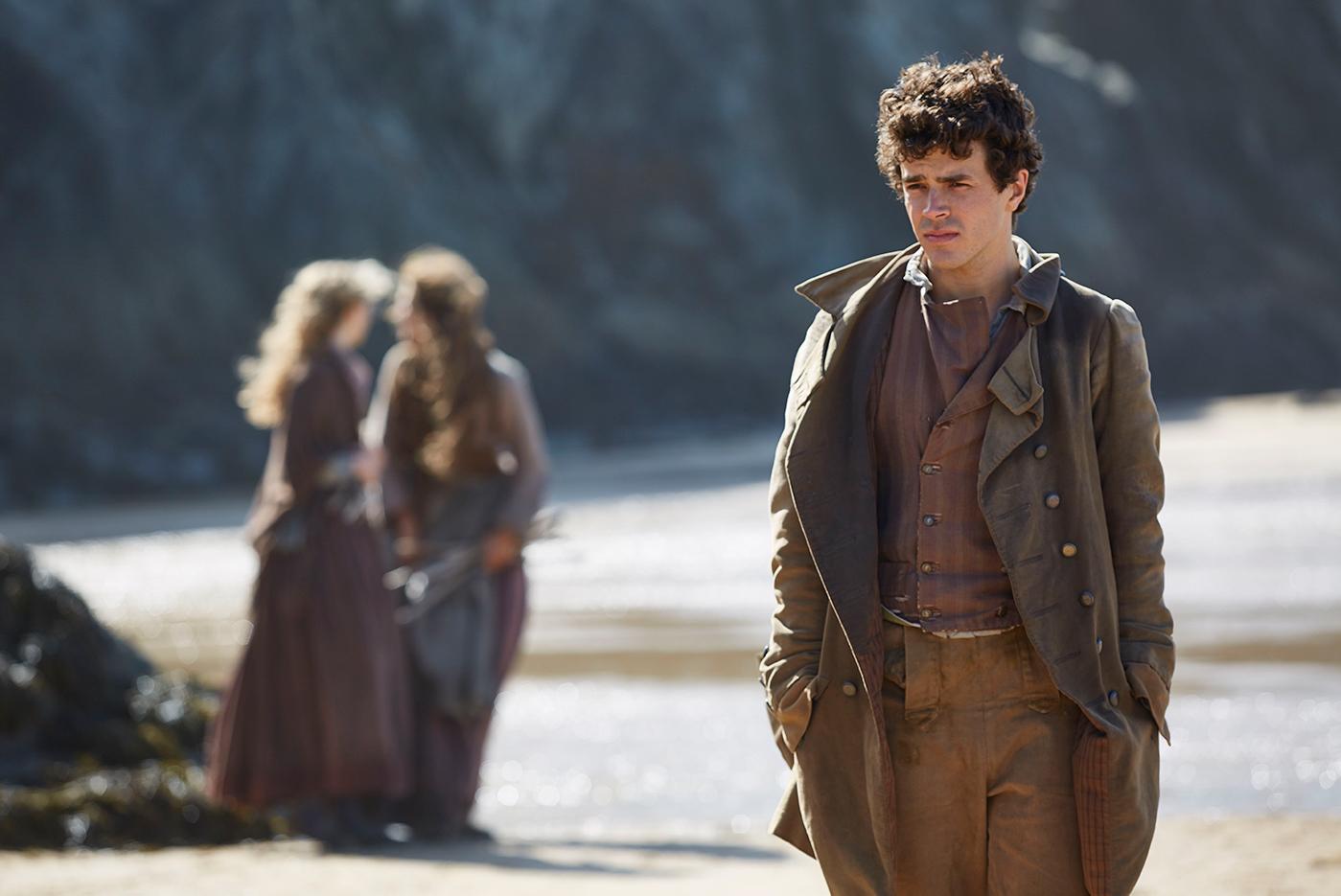 Drake is finally beginning to move on from Morwenna. Photo: Mammoth Screen for BBC and MASTERPIECE

Dwight arrives home that night as Caroline, doting on little Sarah, is putting her to bed. The baby has “the strangest little cough,” she remarks. Dwight listens to Sarah’s heartbeat and deadpans that it’s nothing serious, but he is quietly anxious. The next day, Caroline and Sarah are back at Demelza’s. Sarah now has a cold, but Caroline is sure it’s nothing.

Meanwhile, Dwight is summoned to the vicarage; the spineless Dr. Choake needs a second opinion before he will commit Morwenna to an institution. Impatiently, Dwight insists on examining Morwenna alone, over Ossie’s vociferous objections. Afterward, simmering with fury, Dwight tells Ossie, as Choake nods in agreement, that Morwenna is perfectly sane, declaring that “if a husband cannot win his wife by loving kindness and sympathy, then he deserves to go without her.” He turns on his heel and leaves, to a standing ovation from women everywhere.

In the mine, Sam says a prayer as they are about to break through the final bit of rock blocking the new lode. The men let fly with their pickaxes, and a piece of the wall comes away wet. A trickle of water suddenly becomes a raging flood, and the panicked miners run for their lives. The mine’s clanging bell attracts a stampede of helpers, including Demelza, Drake, and Rosina.

Dwight is at home, trying to soothe a fretful baby Sarah. Caroline playfully accuses him of overreacting; even she knows “a cold isn’t the end of the world.” Knowing he can no longer shield her from the truth, Dwight gently informs Caroline that “for Sarah, it will be.” Clutching the child to her, Caroline is certain he’s joking. Dwight assures her he is not. Before he can say more, he is called to the mine…

…where conditions are dire. Zacky’s surviving son Bobby is trapped underwater and Ross is attempting to rescue him. As the water rises, Ross, with an unconscious Bobby draped over his shoulder, is unable to get up the ladder through the current. Sam hauls them to safety, but Bobby has apparently drowned. Dwight isn’t having it, though; frantically, he performs a procedure that is evidently new to the onlookers – CPR with mouth-to-mouth resuscitation. Despite all odds, Bobby comes around. “Dwight, you really can work miracles!” exclaims Demelza. “I wish that were true,” gasps Dwight ruefully, thinking of Sarah. 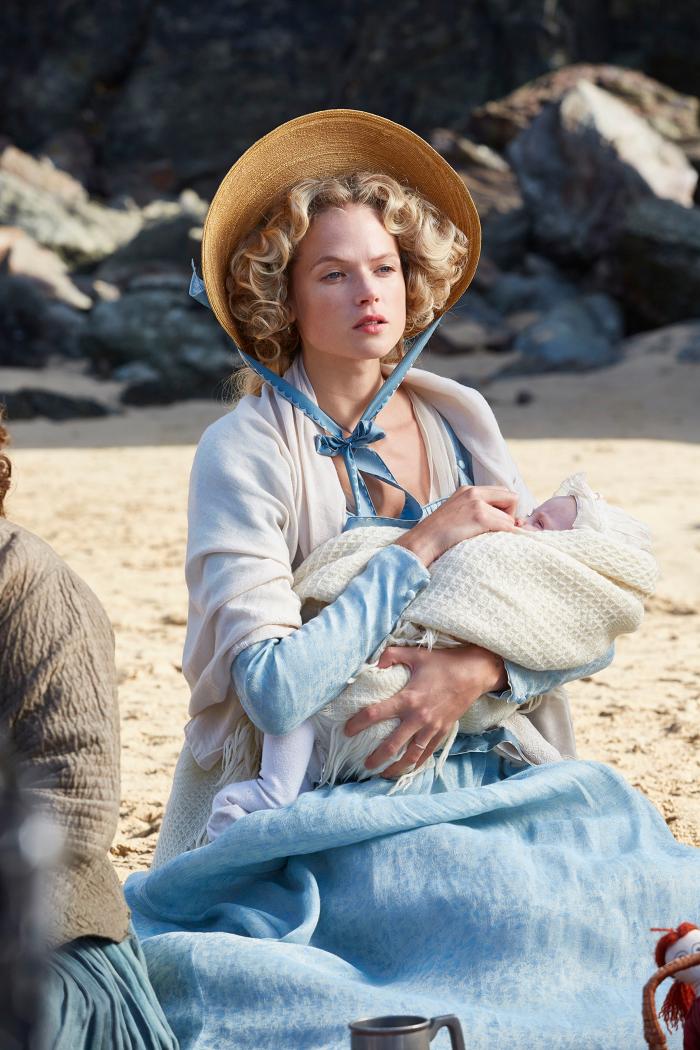 Tragedy upends Caroline's life. Photo: Mammoth Screen for BBC and MASTERPIECE Later, Ross learns of Sarah’s illness, and arrives at Dwight and Caroline’s to find Caroline clinging to her baby and furious with Dwight for keeping the truth from her. Sarah only has a matter of hours, Dwight tells Ross; Ross wishes he had brought Demelza. “No,” Caroline objects. “Demelza would cry, and that, I fear, would undo us all.”

At dawn, Sarah dies in Caroline’s arms as Dwight helplessly looks on. Shakily, he asks to take the baby from her, but Caroline, numb, doesn’t want to let go. Overcome with grief, Dwight finds Ross still waiting in the parlor and collapses sobbing into his arms. Dissolve to the churchyard as a weeping Dwight, with Caroline stoic and dry-eyed at his side, carries Sarah’s coffin through the driving rain and a phalanx of mourners into the church.

Afterward, Demelza wanders disconsolately on the beach – Sarah’s death has brought back the pain of losing her first child Julia. An equally depressed Ross joins her, wondering if it’s only Julia she’s thinking of, and she flies into a rage – will she never live down Armitage? Ross’s failure at the mine has made him question everything, but he knows he has to find a way to reopen the mine – too many livelihoods depend on it.

Caroline, steeling herself, breaks the news to Dwight that she needs to go to London for a while; with so many reminders around her, she can’t recover. If it’s only for a month, Dwight suggests, he could leave his patients and accompany her. “It will not be just a month,” she admits. As she and Horace take their leave, Dwight tries to be strong for her, but he is gutted.

Drake appears to be moving ahead with Rosina, who has become a fixture at Ross and Demelza’s, as has a lonely Dwight. As Ross and Dwight commiserate during a walk in the woods, they happen upon one of George’s fences, and in a symbolic and perhaps therapeutic gesture, Ross destroys a section of it.

George has convinced one of the MPs in his new borough to stand down, so he will be headed back to Westminster soon, and Elizabeth is excited at the prospect. Ross too is returning; he promises Demelza that he will bring her with him the next time.

Preparing to depart, Ross asks Dwight to watch over Demelza – Dwight thinks Demelza will feel she needs to look after him. Ross promises to bring Caroline back to Dwight as he did once before. As Ross rides away in the rain, Demelza and Dwight know they will have to make the best of their mutual abandonment, together.