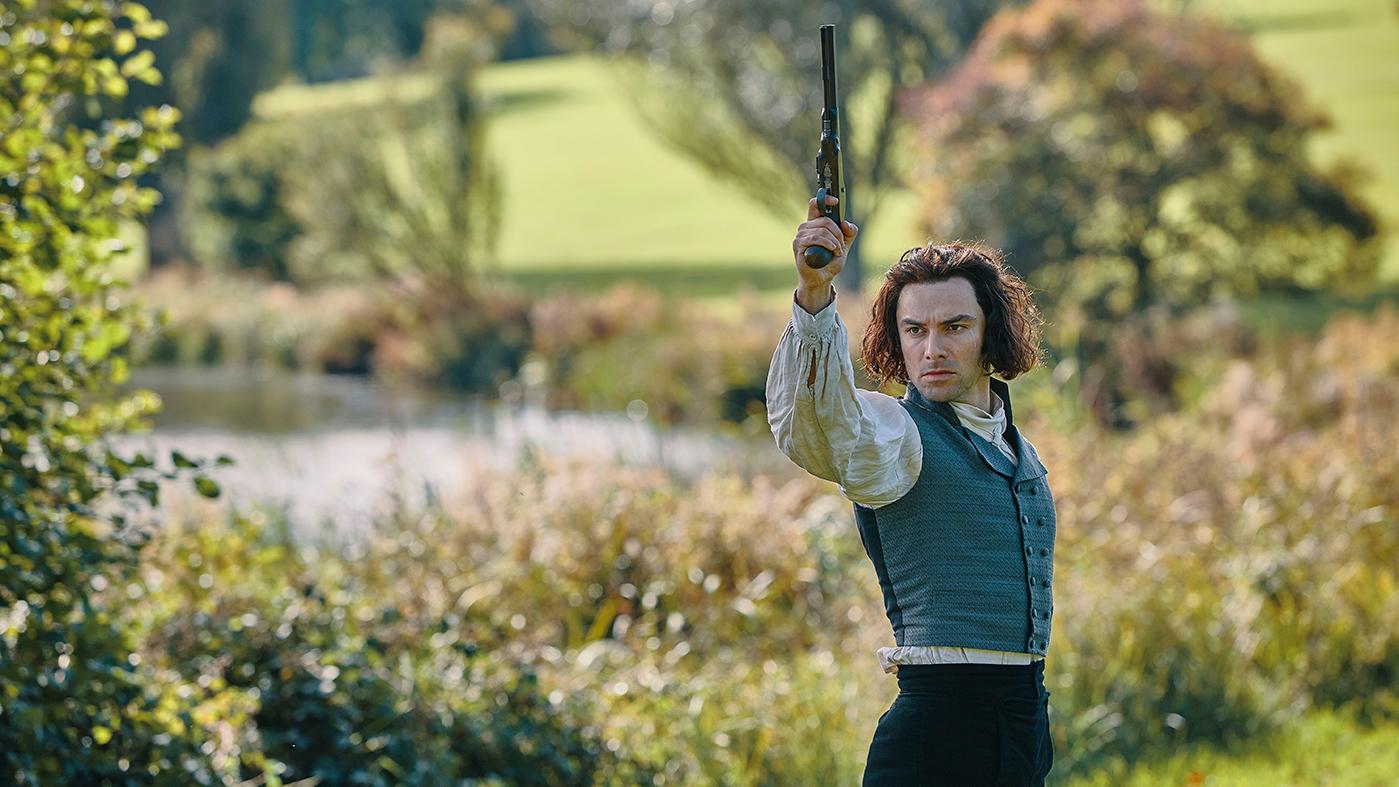 Ross, as usual, makes a rash-headed decision that gets him into deep trouble. Photo: Mammoth Screen for MASTERPIECE

London. We start with some soft-focus Ross-and-Demelza sexy times, then dissolve to them strolling through a pleasure garden as Adderley sizes up Ross’s attractive companion.

The Warleggan family disembarks at their elegant London digs, George informing Elizabeth they will be hosting a masked charity ball to benefit the foundling hospital. Ross and Demelza are surprised to receive an invitation. The Enyses will be attending, too, and Caroline decks out Demelza (and Dwight) in the latest Regency fashion.

Back in Cornwall, Drake and Sam are surveying a new forge. It’s a major fixer-upper, and they set to work. Meanwhile, Lady Whitworth, continuing to be horrible, has found a doctor who will commit Morwenna to an asylum as soon as she gives birth.

Everyone meets up at the Warleggans’ ball. As Ross and Dwight watch cynically, George and Elizabeth make a grand entrance, George making a great show of his phony altruism. Adderley arrives with a dim young courtesan, Andromeda Page. Caroline cautions Demelza not to take Adderley seriously.

Adderley, eyeing Demelza acquisitively, asks George about her. The two men wager ten guineas that Adderley will manage to seduce her within the week. Adderley palms off Miss Page on Ross and smoothly draws Demelza away; oozing with swampy innuendo, he puts the moves on her. Ross, Dwight, and Caroline come to her rescue, and Demelza, anxious not to make a scene, suggests they all meet in a few days at the gaming rooms. 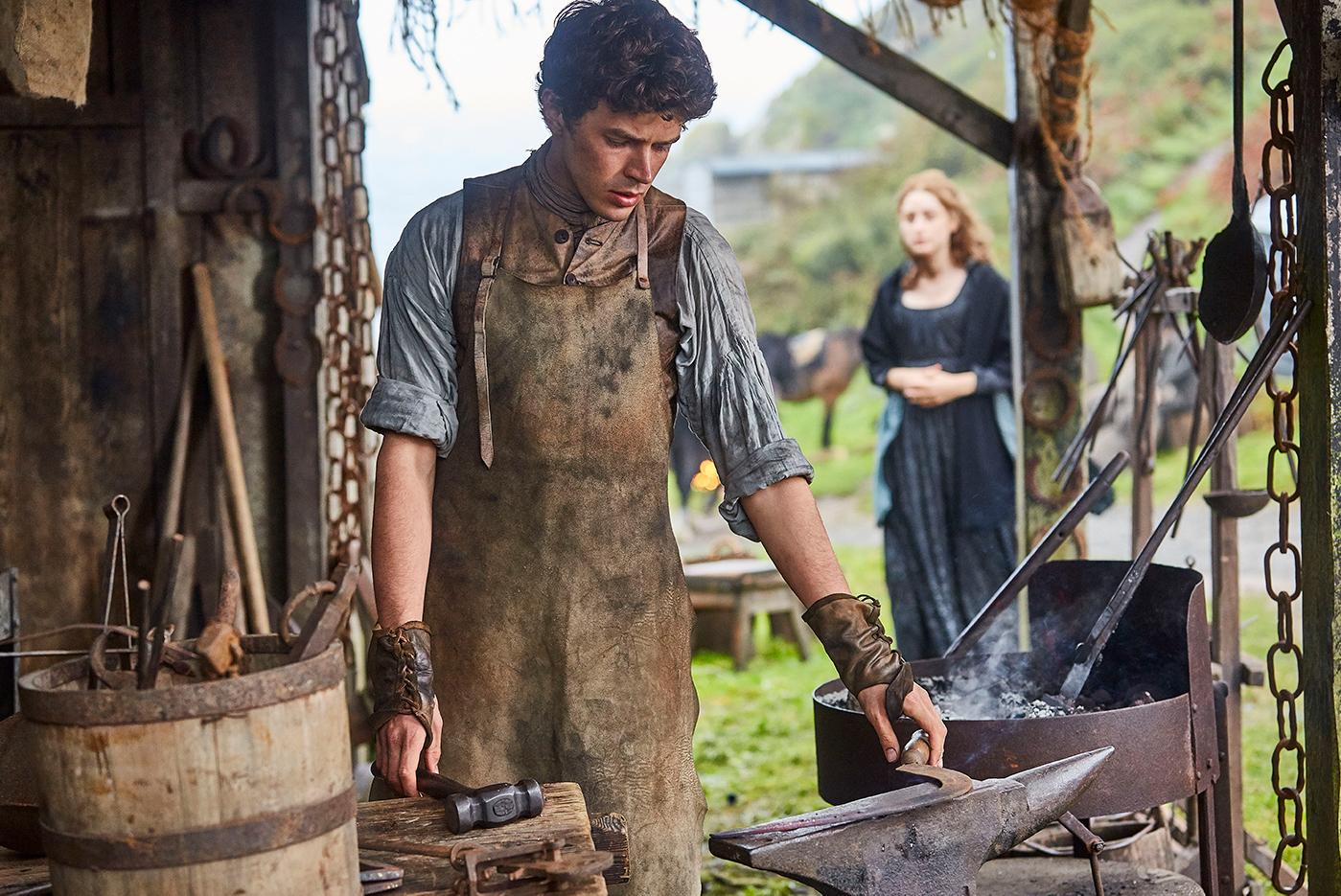 Drake has a new forge and is still pining after Morwenna. Photo: Mammoth Screen for MASTERPIECE

At the roulette table, Adderley is all over Demelza like a cheap suit. Later, Ross is concerned that Demelza is encouraging him – Demelza maintains she was just being polite. The next morning, an extravagant bouquet arrives from Adderley. Ross is all for throwing it in the gutter, but Demelza, who loves flowers, cannot bring herself to do it.

That evening while Ross is in Parliament, Demelza arrives back at their darkened lodgings alone to find Adderley waiting for her; the landlady thinks he is her brother. Taking her acceptance of his flowers as a “yes,” he goes in for the kill, but, outraged, she pushes him away and rings for help. He angrily departs. Ross later accuses Demelza of leading him on. She vehemently denies it.

Early the next morning, Morwenna wakes to find blood on the sheets. She has miscarried.

A session of Parliament is commencing; asked to save a seat for another Member, Ross places his gloves on it. Adderley, making a rare appearance, slides into the empty seat. Ross points out that the seat is taken and that Adderley is sitting on his gloves. “Why would I wish to touch any of your worn possessions?” retorts Adderley. Ross forcefully yanks him to his feet, retrieves his gloves, and drops him red-faced back onto the seat. As the other Members point and laugh, George enjoys the fracas.

Later that day, Ross receives a note – Adderley is challenging him to a duel at dawn two days hence. Dwight laughs it off, but Ross has already accepted. Aghast, Dwight tries to talk him out of it – Adderley is a renowned duelist; duels are illegal; and is he crazy, risking his life over something so trivial? Ross is unmoved, and makes him swear not to tell Demelza and Caroline. Disgustedly, Dwight agrees to be his second – a doctor might be needed. He tries to negotiate with Adderley’s second, John Craven, but Adderley is bent on revenge. 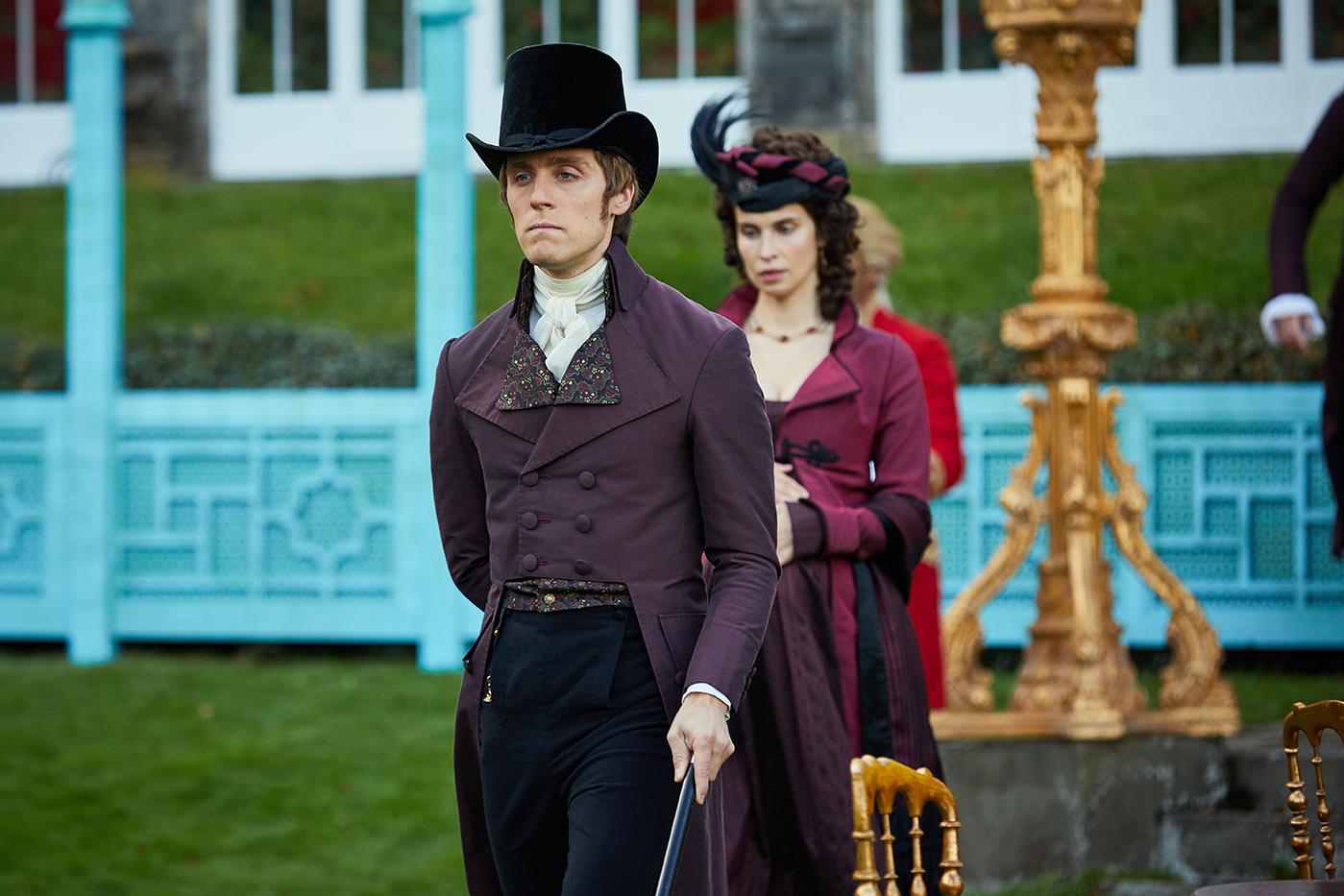 George is eager to exploit Ross's rivalry with Adderley, though he also has his own problems with Elizabeth. Photo: Mammoth Screen for MASTERPIECE

The combatants meet up; Adderley is seething and Ross is eager to dispatch him. Dwight pleads with them to reconsider. Adderley, anything but conciliatory, sneers that he will if Ross will apologize, but he “will think very ill of him if he does.” Ross will not consider it, so they take up their weapons, agreeing that the uninjured party will hurry away to avoid arrest. Ross and Adderley go through their paces, turn, and fire. Both miss their targets, and Dwight quickly calls a halt. But they fire again – Ross is hit in the forearm and Adderley is on the ground, shot in the groin. Despite a grimacing Adderley’s angry warnings, Ross, having applied a tourniquet, refuses to leave until Craven returns with a carriage. Dwight, frantically treating Adderley’s wound, forces him to go.

Demelza is shocked when a bloodied Ross staggers into their lodgings, followed soon after by Dwight, who has to extract the bullet without anesthetics. Later, Demelza blames herself for the duel. Caroline tries to reassure her – at least it’s no worse. But it is: a note reveals that Adderley is dead -- he “shot himself during pistol practice.” Adderley had to bribe the coachman ten guineas for his silence, and the note requests that Ross “pay that sum to George Warleggan in settlement of a wager” (for failing to seduce Demelza, but Ross doesn’t know it).

George learns of Adderley’s death and Ross’s incapacitation, and, naturally, vows to Elizabeth that he will ensure that Ross is charged with murder, despite an inquest verdict of “death by misadventure.” At a gathering, George spots the Attorney General, Sir John Mitford*, and to Elizabeth’s discomfort, loudly insists that Ross murdered Adderley. Mitford cites the verdict, thinks Adderley got what he deserved, and coldly dismisses George’s claim as “drawing room gossip.”

Lady Whitworth, hard as nails, tells Morwenna that as she has clearly “lost her wits,” she will be taken to a place where they can be recovered. Later, Drake is at work at his new forge when a fragile Morwenna appears – Ossie abused her “in every possible way,” and now the very thought of “carnal love” repulses her. She runs off, weeping.

Dwight advises Ross to get out of town fast; more witnesses may come forward. Demelza agrees, but Ross thinks that would be an admission of guilt. As Dwight and Demelza restrain themselves from throttling Ross, Geoffrey Charles breezes in, glad that he’s “not the only Poldark to misbehave.” 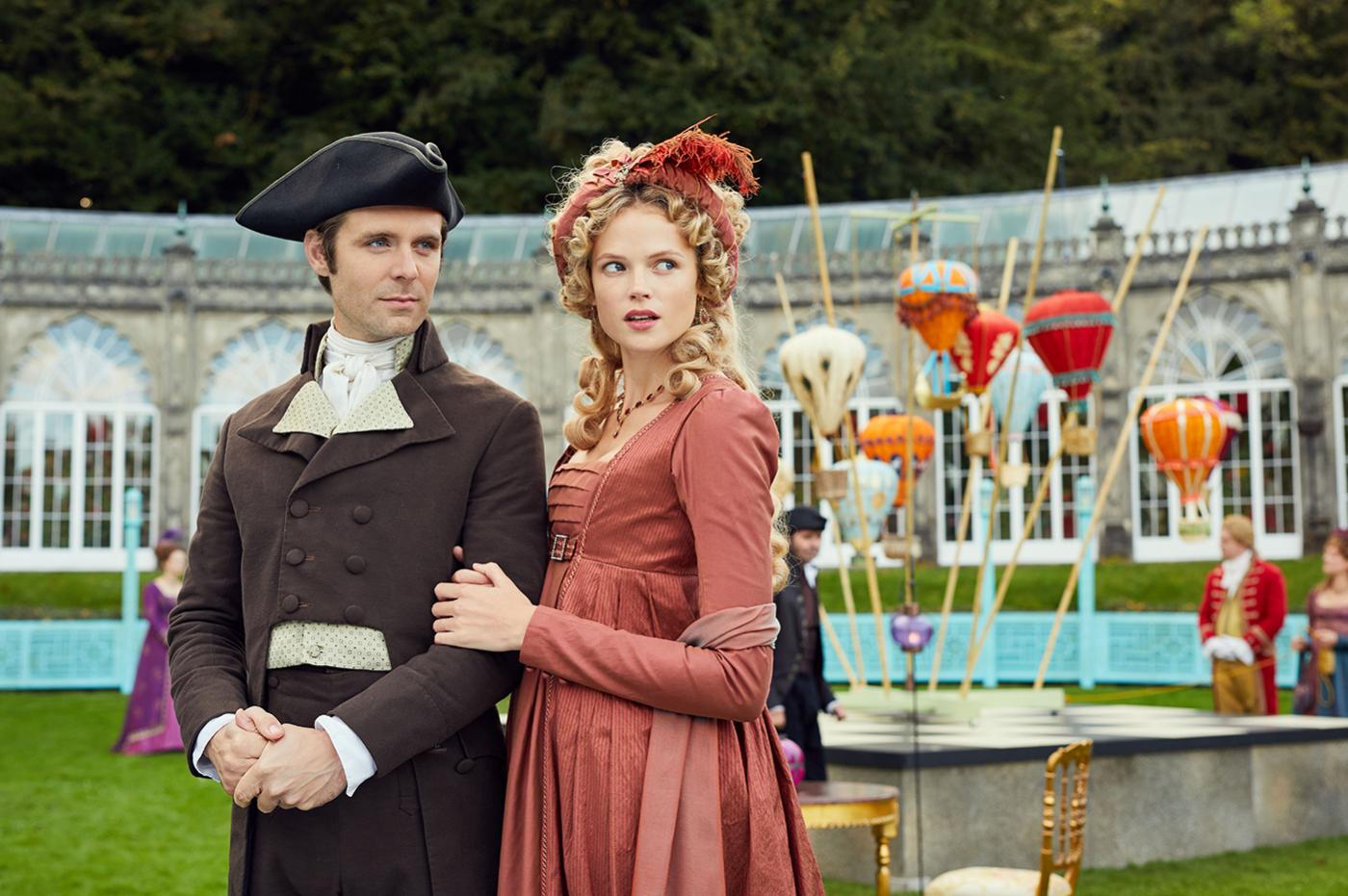 Caroline and Dwight are beginning to work out a compromise in their relationship between their different needs. Photo: Mammoth Screen for MASTERPIECE

George is still brooding when a letter arrives from the Prime Minister -- a knighthood may be in the offing. Geoffrey Charles, seeing Valentine astride his rocking horse brandishing a toy gun, disastrously observes to his mother, “Is he not the spitting image of Uncle Ross?” That evening, George and Elizabeth share a tense and silent dinner; seething, George stalks off, leaving her alone at the table.

Dwight must return home to his patients; Caroline, flippant as always, tells him that “Horace” wants him to stay longer. They accept that their needs won’t always coincide; he will go back to Cornwall, and she (and Horace) will follow soon.

The next day, Demelza and Ross are in the park with Dwight and Caroline when Ross sees Elizabeth and George passing by in stony silence. Remembering Adderley’s request, Ross approaches George as the others try in vain to dissuade him, handing him the ten guineas for the unknown wager Adderley lost. George, in a rage, hurls the coins in Ross’s face and storms off. Elizabeth is mortified – this was bad, even for him.

The next morning, Ross wakes alone; Demelza has caught a ride back to Cornwall with Dwight. She is “out of her depth in London society. When he returns, they’ll “see what there is to be done.” Has Ross lost her for good?

*Sharp-eyed fans of British drama will recognize the actor Adrian Lukis, who played Wickham to Colin Firth’s Darcy in the 1995 BBC Pride and Prejudice.