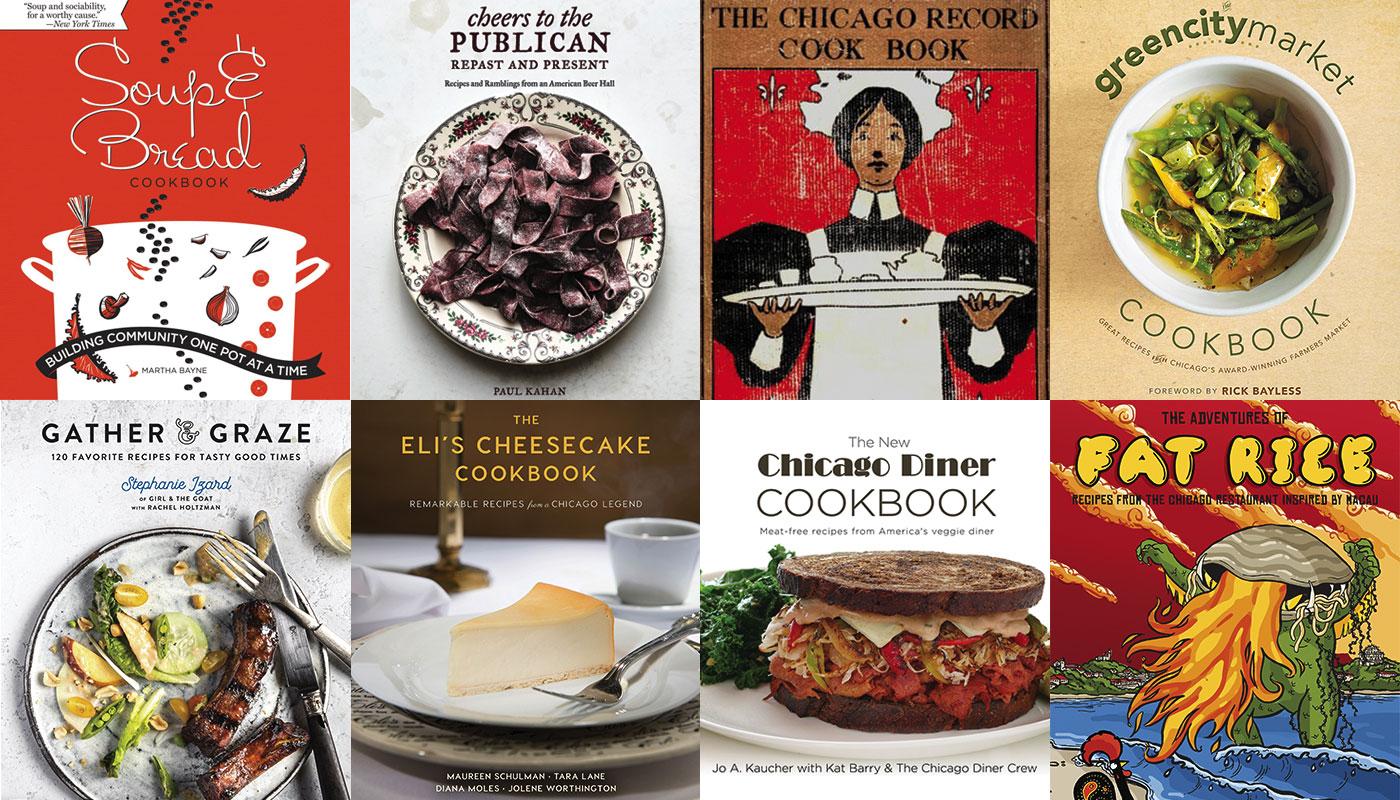 Photo of 'The Chicago Record Cook Book' courtesy of The Wright Book/Biblio.com

Chicago is a great food city. Located in the heart of the fertile Midwest, home to immigrants from around the world, and full of people who spend a good portion of every year stuck indoors – we Chicagoans know how to eat with panache. As such, over the years, we’ve produced a bounty of cookbooks. Local chefs, restaurants, organizations – even baseball teams and politicians – have gotten in on the action. So, for this holiday season, we’ve compiled a list of Chicago-made cookbooks for your consideration. Behold, the cream of the cookbook crop.

Cookbooks for a Cause

Soup & Bread Cookbook: Building Community One Pot at a Time
by Martha Bayne

Eleven long, cold winters ago, the first Soup & Bread gathering gave Chicagoans a place to break bread, enjoy soul-nourishing soup, and interact socially with other humans in the dead of winter – all while supporting a great cause. Professional and amateur chefs provide the soup, local bakeries and restaurants donate the bread, and attendees give what they can, with all proceeds going to fight hunger. So far, Soup & Bread participants have donated more than $80,000 to local food pantries and other hunger relief organizations. Meanwhile, Soup & Bread has become a Chicago institution, inspiring spinoffs around the world. Here, its creator, Martha Bayne, has collected recipes from some of the best soups stirred up for the cause, and peppered them with stories that celebrate the role of food in fostering community and fueling movements. It’s not only a great cookbook, it’s an uplifting read.

The Green City Market connects Chicagoans to the producers of their food through a year-round market that promotes and supports sustainable farming. It also manages a host of programs – from scholarships for area farmers to educational programs in local schools and at the Lincoln Park Zoo. Their cookbook is a compilation of favorite recipes gathered from a large community of customers, farmers, and Chicago chefs – organized, naturally, by season.

The Chicago Record Cook Book, first published in 1896 and reprinted as The Daily News Cook Book, was “a cook book by the people and for the people,” assembled entirely with contributions sent in by homemakers across the country. It is a window into a different time, when cooking measurements had yet to be standardized and food was cooked in coal- or wood-burning stoves. Though many of the recipes might be difficult to adapt to today’s kitchens, and sometimes call for ingredients (like squirrel) that today’s supermarkets lack, the book’s cover art is wonderfully odd and display-worthy.

Antoinette Pope taught generations of Chicagoans how to cook fancily from 1930 until 1971 at her School of Fancy Cookery in the South Shore neighborhood. Though she passed away 25 years ago, her techniques and recipes live on in her many cookbooks, including this one, her most popular and comprehensive. It’s like a The Joy of Cooking or How to Cook Everything – but for mid-century Midwesterners. And, of course, a little fancier.

Not only was she Chicago’s first female mayor, she may have also been the first to publish her very own cookbook while in office. Mayor Byrne’s Chicago Heritage Cookbook was published by the Mayor’s Office of Special Events in 1979 to showcase the city’s many ethnicities and cultures. It drew upon several of the social and ethnic clubs of its time. A recipe for Armenian Potato Salad, for example, was contributed by the Armenian Relief Society, and a recipe for fruit bonnag (a sweet bread) was contributed by the Chicago Manx Society (from the Isle of Man), making it a cultural, as well as culinary, curio.

The Taste of Chicago Cookbook
by Richard M. Daley and Kathy Osterman

Mayor Daley’s 1990 foray into the cookbook scene deserves a mention not only because it happened, but because it contains many recipes from dearly departed Chicago restaurants. Longtime West Side residents, for example, might still pine for the peach cobbler at Edna’s, Garfield Park’s legendary soul food restaurant that shuttered in 2010. Notably, Maggie Daley’s recipe for beef stew also made it into the book.

Chef Stephanie Izard rose to national fame in 2008 when she became the first woman to win Bravo’s Top Chef. She has since opened three popular Chicago restaurants (Girl and the Goat, Little Duck, and Duck, Duck Goat), lived in China, won the Food Network title of Iron Chef, gotten married, and had a kid. Her new cookbook, released in spring 2018, is informed by many of those experiences. It includes fan favorites from her restaurants (adapted for a home kitchen), Chinese-inspired fare, and dishes that are relatively easy to cook in stages (for those who are periodically distracted by young ones or company).

When Chef Paul Fehribach brought his upscale take on southern cuisine to Chicago in 2008, he attracted a dedicated clientele almost overnight. His cookbook, like the Andersonville restaurant with the same name, relies heavily on heirloom crops and heritage livestock, and, like his cooking, draws on the many rich traditions of the South.

The Adventures of Fat Rice: Recipes from the Chicago Restaurant Inspired by Macau
by Abraham Conlon, Adrienne Lo, and Hugh Amano

It’s a restaurant, a bakery, a bar -- and now a cookbook, too. In 2012, Fat Rice opened in Logan Square, awakening local taste buds to the unique and bold flavors of Macau, a region that itself is a melting pot of Chinese, Portuguese, Malaysian, and Indian influences. The cookbook is a primer on the tools, techniques, and dishes that make the restaurant so popular (including its coveted arroz gordo, the restaurant’s namesake). It is also sprinkled with an array of stories and gorgeous photos from the region that inspired it.

Cheers to the Publican, Repast and Present: Recipes and Ramblings from an American Beer Hall
by Paul Kahan and Cosmo Goss

What began as an homage to “life’s simplest pleasures: oysters, pork, and beer” in Chicago’s meatpacking district has become one of the city’s most celebrated contemporary culinary institutions. In the cookbook, released in 2017, Goss and Kahan have created a homage to the restaurant complete with food poetry, ruminations, and, of course, recipes for several of their celebrated signature dishes.

Pastry chef Paula Haney has been delighting diners with her classic pies since she opened her first storefront in Ukrainian Village in 2009. Back then, she says, there was not a single pie shop in Chicago. She has been making up for that oversight ever since, preserving and re-establishing America’s pie-making traditions, one pan at a time. The book includes a step-by-step guide to making a killer crust, as well as a bevy of sweet and savory recipes for any season or occasion.

The Chicago Diner has been serving vegan comfort food to Chicagoans since 1983, first from their Lakeview East location and now in a second location in Logan Square. In the newest edition of their cookbook (published in 2014), chef Jo Kutcher dishes on more than 120 of her classic recipes – including her coveted Radical Reuben and vegan milkshakes. It’s a great resource for vegans, or anyone who wants to eat fewer animal products.

Authentic Mexican: Regional Cooking from the Heart of Mexico
by Rick Bayless with Deann Groan Bayless

Rick Bayless, perhaps Chicago’s most well-known celebrity chef, has several cookbooks to choose from (as well as a line of products, several restaurants, a television show, etc., etc.). But his first compendium of Mexican fare – and the one he says he spent five years researching – is Authentic Mexican. It includes not only recipes for the most popular regional Mexican classics, but also pointers for re-creating genuine Mexican textures and flavors in your typical North American kitchen…and substitutions for when you just don’t have an extra special ingredient.

The Eli’s Cheesecake Cookbook: Remarkable Recipes from a Chicago Legend
by Maureen Schulman and Tara Lane

Part cookbook and part tribute to Eli Schulman, longtime Chicago restaurateur and chef, the Eli’s Cheesecake Cookbook includes recipes from the legendary Eli’s Place for Steaks, which closed down in 2005 to make way for Lurie’s Children’s Hospital. It also includes recipes for more varieties of delicious cheesecake than any human should be lucky enough to eat in a lifetime.

We know that there are several Chicago-centric cookbooks not mentioned here. If there is one that you believe ought to be included, please tell us about it in the comments section below.