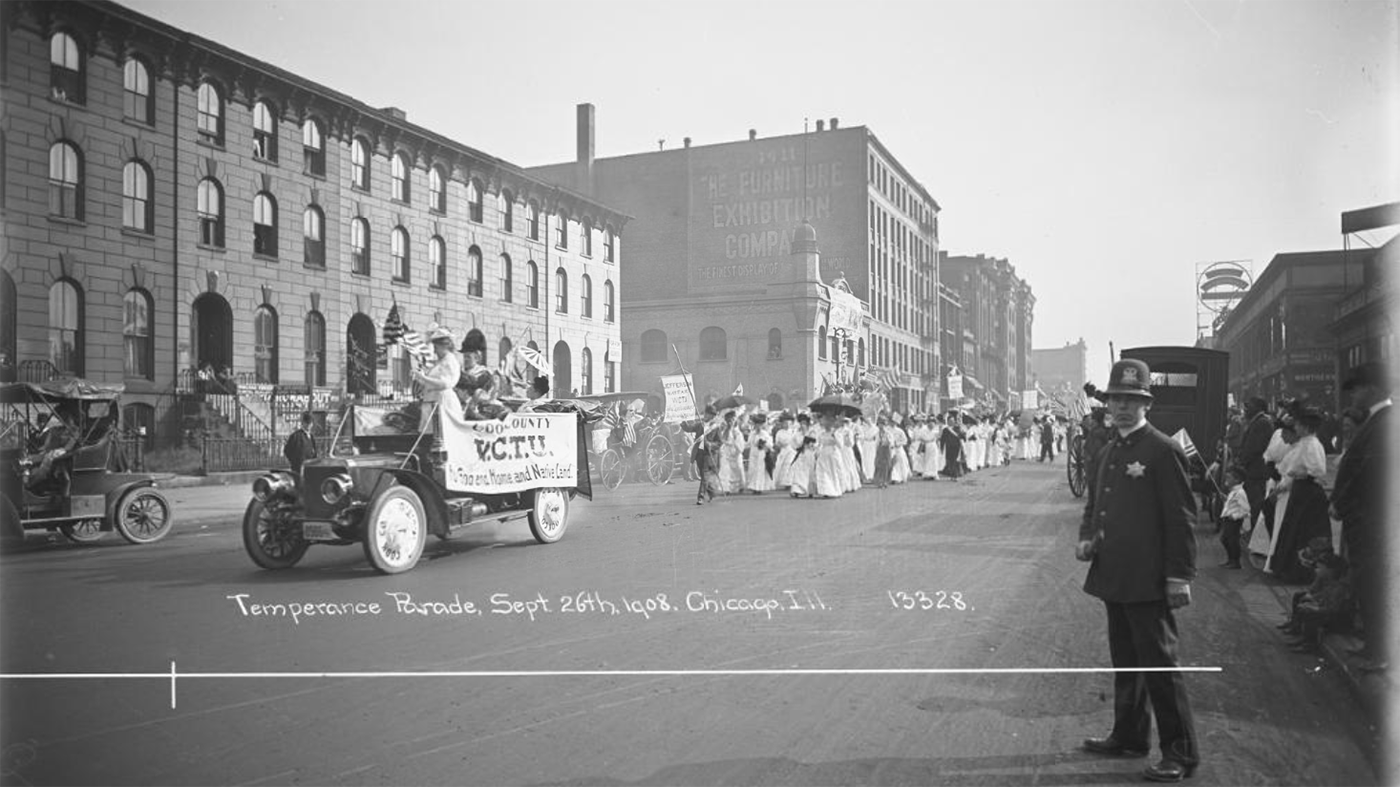 The Eighteenth Amendment, which made the manufacture, sale, or transportation of alcohol illegal in the United States, was ratified 100 years ago, on January 16, 1919, thus inaugurating Prohibition in this country (it went into effect the following year, in 1920). But the campaign for temperance in Chicago dates to at least a hundred years before the long-awaited repeal of Prohibition, in 1933. In 1833, the same year that Chicago was incorporated, two diametrical events occurred in the history of the city’s relationship to drink: the founding of the Chicago chapter of the American Temperance Society, and the establishment of the city’s first brewery. Over the next decades, the antagonism between these two opposing trends would escalate, leaving their mark on the rapidly expanding Chicago and its suburbs in the process.

The significance of that first brewery is apparent from the names of the people involved in it. Although it produced English-style ales and porters, it was established by a pair of German-speaking immigrants named William Haas and Conrad Sulzer – after whom the Sulzer Regional Library in Lincoln Square is named. Sulzer soon moved to the Ravenswood area and became one of the first settlers there, selling his stake in the brewery to William Ogden, who later became Chicago’s first mayor (and the namesake of a major thoroughfare). The business became truly successful under its next owners, Lill and Diversey (recognize the names?), who expanded to a four-story location at Chicago Avenue and what is now Michigan Avenue and began shipping their product down the Mississippi River and up to Wisconsin. At least one other, later brewer also gave his name to a street: Charles Wacker. 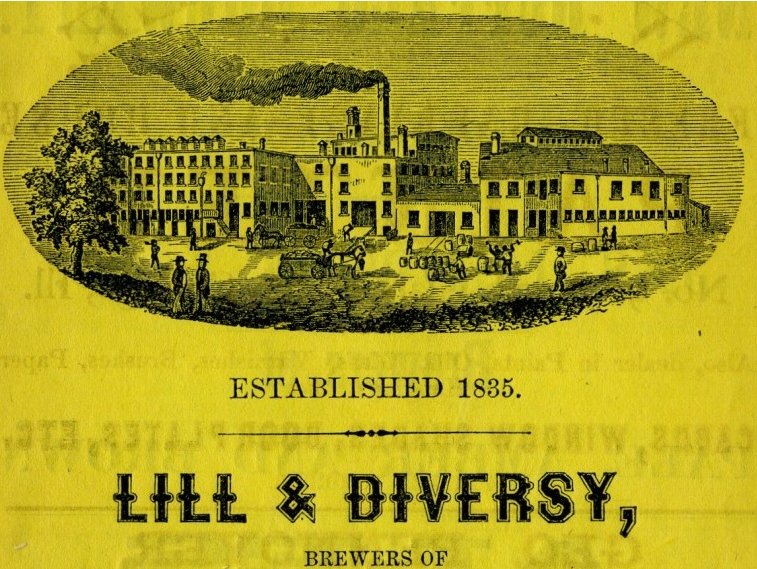 Portion of an ad for Lill and Diversy's Brewery from the 1859 Chicago Business Directory. Image: Chicago Public Library

As German and Irish immigrants flooded into Chicago, the lighter, more carbonated lagers that they preferred became more popular, with the first German-style brewery and beer garden opening in 1847. By that year, the number of temperance societies in Chicago had ballooned to ten. They pushed back against the popularity of breweries (whose need for draft animals to transport product was great enough that it helped establish breeding farms for large animals near the city) and supported the passage of an 1851 state law limiting the sale and consumption of alcohol. The law was repealed within two years.

Despite the setback, temperance advocates continued to fight against “demon drink.” When a group of Methodists founded Northwestern University in the early 1850s, they instituted a four-mile dry zone around the school; when Evanston was incorporated in 1863, it was dry by default. Other nearby towns followed suit: Winnetka, Oak Park, and River Forest all became dry in the next decades. (And remained so for a century or more.)

Supporters of temperance were less successful in Chicago, where ethnic tension and xenophobia fed the movement against alcohol. In 1855, a coalition of anti-immigrant, anti-Catholic (in effect, anti-Irish) Know-Nothings took advantage of extremely low turnout and interest in city elections to vote Levi Boone into the mayor’s office. Boone then targeted those recent German and Irish immigrants via their gathering places, the tavern or beer garden. Liquor licenses became exorbitantly expensive, while a tripled-in-size police force began enforcing a mostly ignored ordinance forcing drinking establishments to close on Sundays. 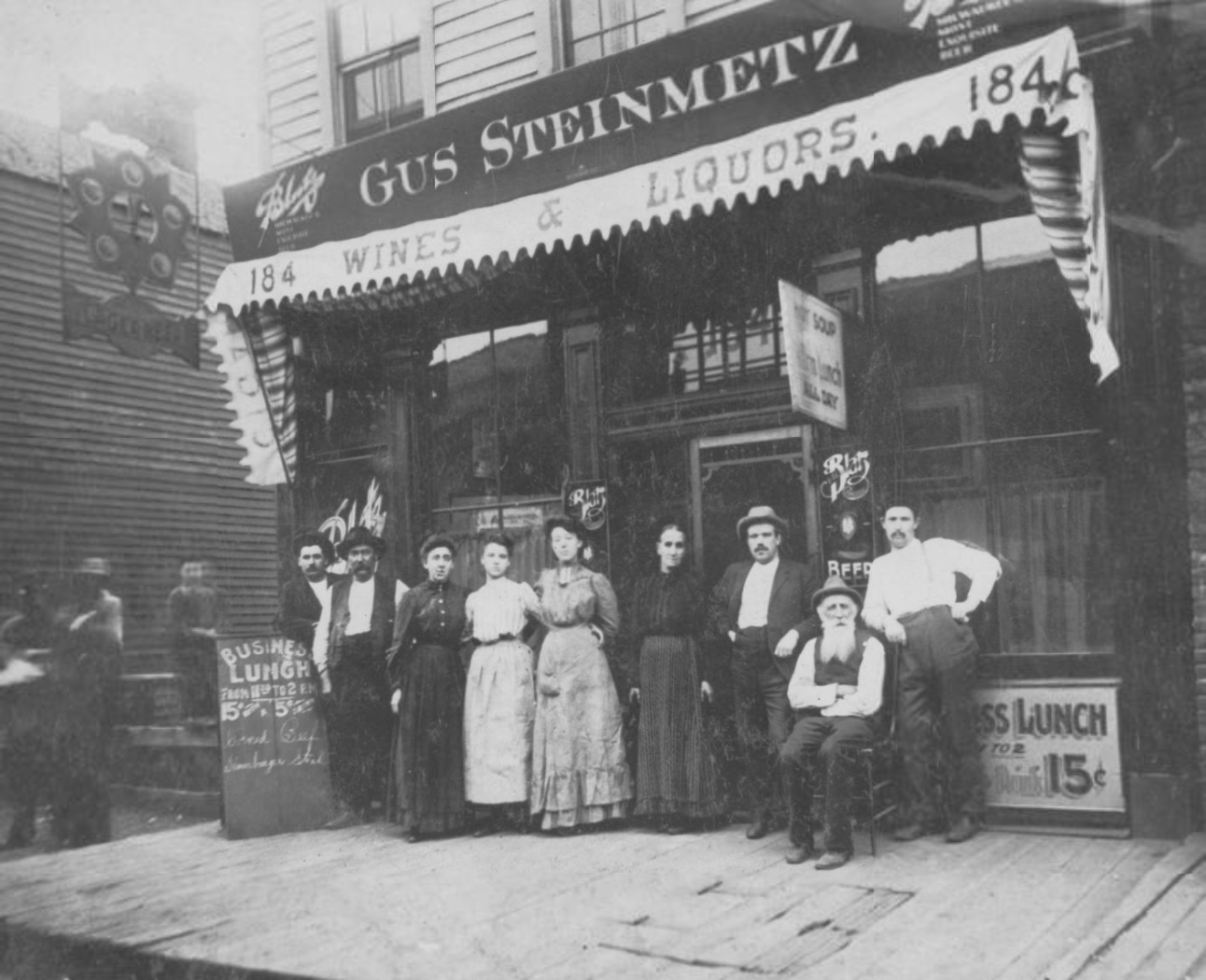 A saloon in downtown Chicago in 1898. Photo: Chicago Historical Society

Chicago’s German population revolted. A huge crowd of North Side Germans assembled to protest court cases brought against tavern owners, while a phalanx of police gathered on the opposite side of the Chicago River. When more than 200 police officers had assembled, the Clark Street drawbridge was lowered, the protesters rushed across, and the militia had to be called in to end the unrest. One person died and 60 were arrested in the “Lager Beer Riot,” Chicago’s first civil disturbance. Boone and the Know-Nothings were ejected by an invigorated immigrant electorate the next year.

The Lager Beer Riot offered a lesson – restricting drinking establishments in the heavily German and Irish city of Chicago was a political non-starter. But in the 1870s, Mayor Joseph Medill (another familiar name, after whom Northwestern’s journalism school is named), prodded by Protestant temperance activists, once again tried to enforce the Sunday closing law, which was still on the books. Irish and German voters mobilized and finally amended the city law in 1874 (although a similar state law remained in place and was eventually ruled to supersede the city law by the Illinois Supreme Court, in 1909). 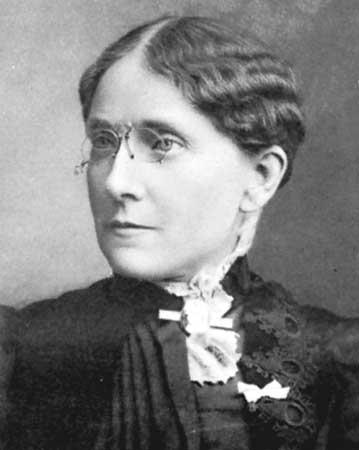 Frances E. Willard, the president of the Women's Christian Temperance Union from 1879 until 1898 Once again, beer drinkers and temperance activists reached milestones in the same year: 1874 was also when the Women’s Christian Temperance Union, perhaps the most prominent temperance group in the country, was founded in Chicago. It soon became the largest women’s organization in the country, with 150,000 members by the turn of the century. In Chicago, where it was headquartered through 1900, the WCTU also provided social services such as childcare, education, and lodging for women, and refracted its campaign against drink through the experience of women struggling with drunk and abusive husbands. (Frances E. Willard, a resident of Evanston and prominent suffragette who served as national president of the WCTU from 1879 until 1898, is immortalized, ironically, by the Evanston distillery FEW Spirits, which takes its name from her initials.)

The WCTU was part of a wave of new temperance organizations founded in Chicago during the last few decades of the century, a trend matched by the growing beer industry. Chicago’s 60 breweries in 1900 were making more than 100 million gallons of beer a year, a flood supplemented by beer coming in from Milwaukee and St. Louis (those two cities became beer capitals in part to address demand in Chicago, so you can partially thank Chicago’s rapid growth for Anheuser-Busch, Pabst, and Miller, among others). Just as the WCTU provided social services, so too did the neighborhood saloons that served beer; the nexus of a community, they often provided a telephone, newspapers, information, food, a gathering place, and safe location for valuables.

The benefits of saloons did little to stop the movement against them. Chicago’s city council adopted an informal agreement in 1894 that allowed aldermen to designate parts of their wards “antisaloon territory.” The primarily Protestant Anti-Saloon League organized in 1898 and supported dry candidates, eventually sponsoring a 1907 state law that granted voters the power to ban the sale of liquor in their district. By 1909, two-thirds of Chicago was dry, with saloons left only in slums, working-class neighborhoods, and the Loop. 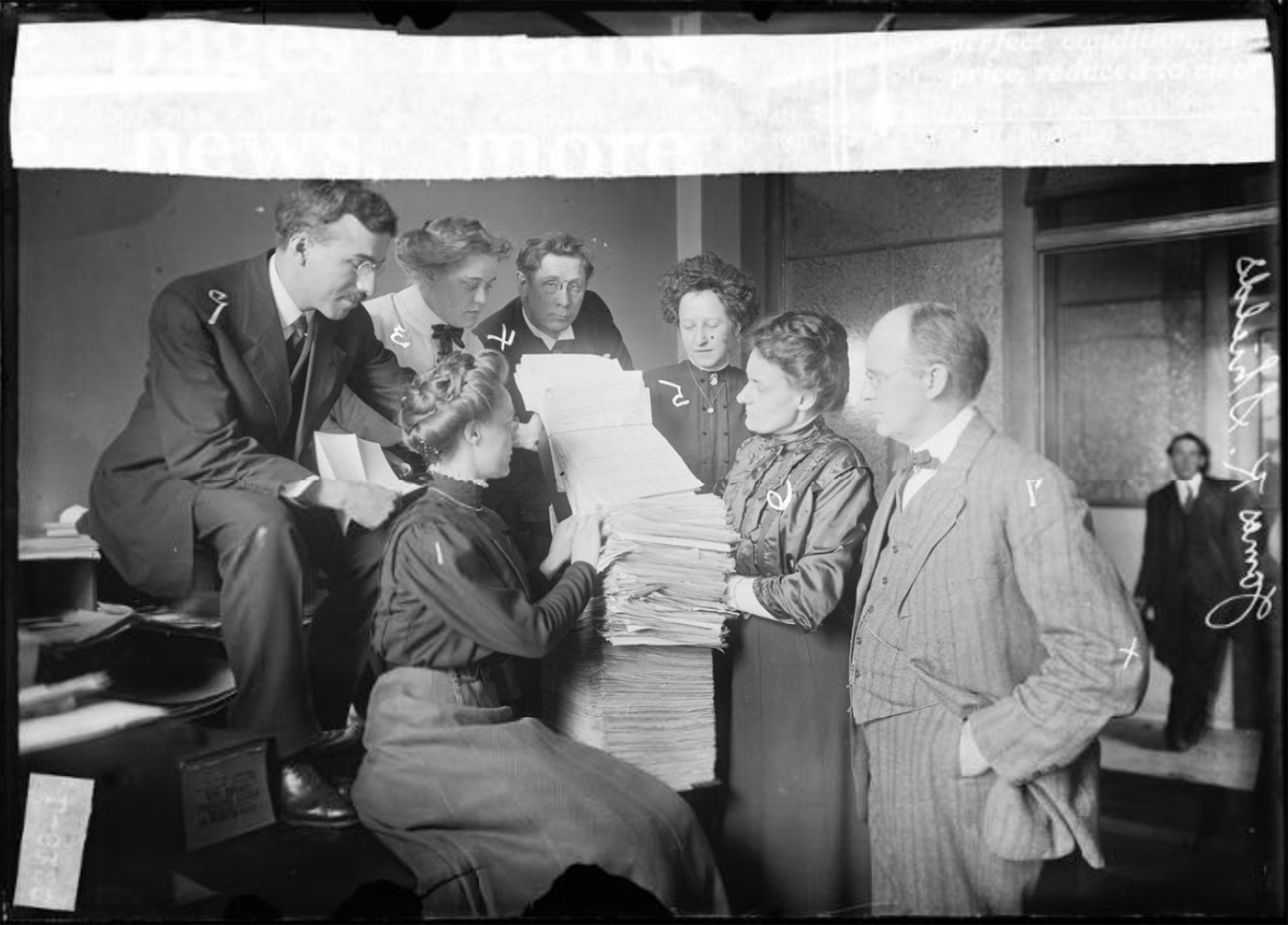 And yet national beer consumption continued to rise – but prohibition was clearly starting to win out. In 1915, a mayor once again closed bars on Sundays (despite this move, Big Bill Thompson would later re-attain the mayor’s office as an anti-Prohibition candidate in 1927). The outbreak of World War I sparked an outpouring of anti-German sentiment, especially once the United States entered the war in 1917 – and many brewers were German, so prohibition advocates were able to label beer anti-American. Wartime mobilization also restricted the production of alcohol: agricultural products were more useful as food than in distilling and brewing.

And so in the beginning of 1919, the requisite number of states ratified the Eighteenth Amendment, legally settling the decades-long conflict between temperance advocates and beer brewers – at least for a short while.