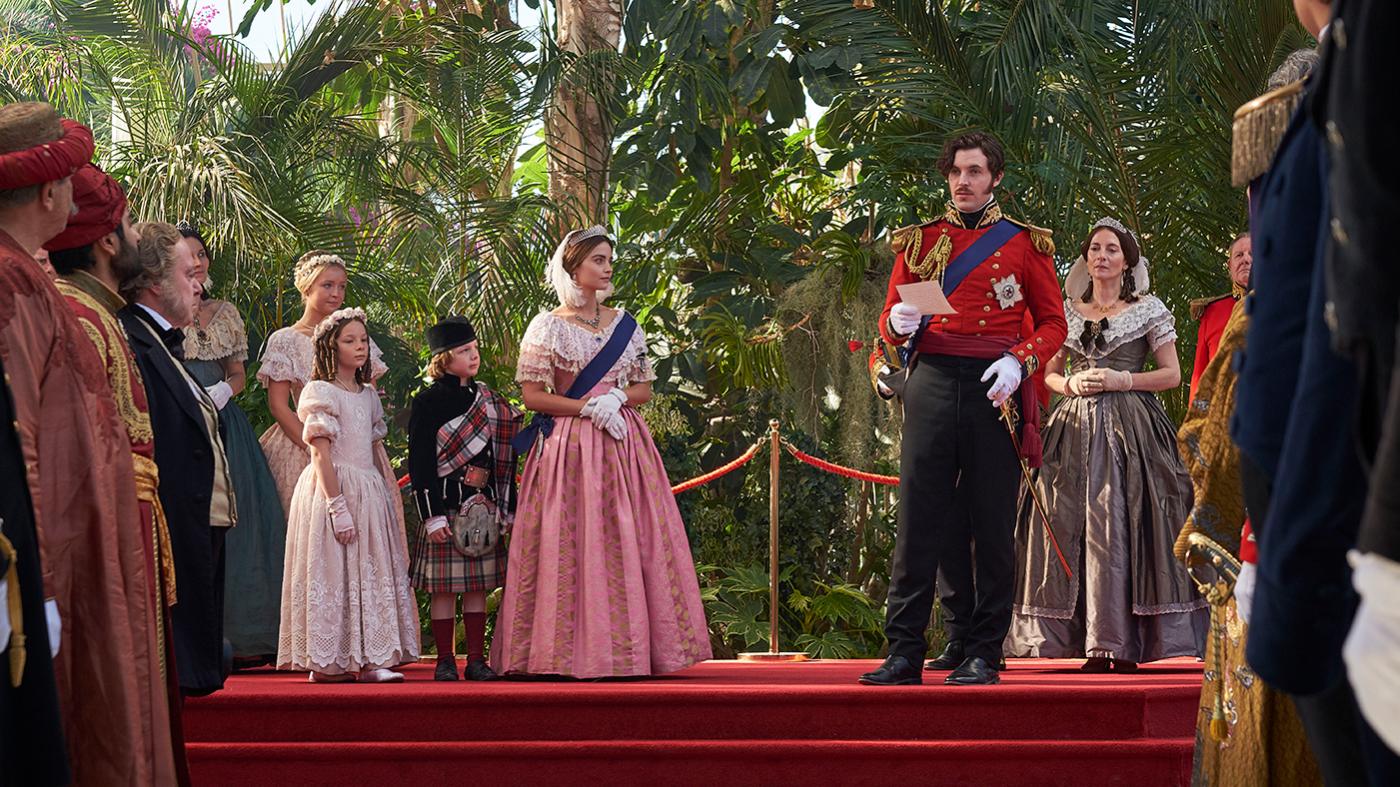 Albert is killing himself trying to insure the success of his Great Exhibition. Photo: Justin Slee/ITV Plc for MASTERPIECE

Victoria is available to stream. Recap the previous episode, and explore all of our Victoria content.

It’s a “crystal abomination,” a “white elephant,” it will spread a new plague: the public remains skeptical of Albert’s Exhibition, and he’s working himself to exhaustion trying to see it to fruition. Victoria is firmly behind the project, however; when she learns that ticket sales have been low, she offers to appear at the public opening in order to compel more people to come. Albert is afraid he might be “building a monument to my own folly.” Victoria’s response? “Fiddlesticks.”

She is less supportive of Palmerston’s latest unilateral foreign policy decision. Louis Napoleon has taken power in a coup and declared himself emperor of the French, a development most of the British establishment fears. Albert in particular is wary: he’s trying to form an alliance with France’s rival Prussia, and has offered to arrange a marriage between Feo’s daughter Heidi and a Prussian prince (Albert’s own daughter Vicky will eventually marry the Prussian crown prince). But Palmerston has bucked advice and congratulated Napoleon III, hoping to gain an ally against the increasingly imperialist Russia. He has even suggested Napoleon as a match for Heidi, an offer in which Feo is very interested.

For once, Palmerston may have put his foot in it. Prime Minister Russell doesn’t believe the Foreign Secretary has public support, and has begun scheming with other politicians to oust him. The situation is dire enough that Palmerston’s wife Emily, who deplores London society, has come to town on the ostensible reason that she was invited to the Exhibition, but in truth to support her husband.

Sophie has a very different marital relationship. Monmouth has locked her in a room, claiming in letters to Victoria that she is ill in the mind and requires rest and seclusion. Victoria and Emma are suspicious, so Abigail offers to “make inquiries.” Victoria writes a letter and stipulates that it be delivered in person to Sophie. At Monmouth’s house, Abigail is refused entry to Sophie’s chambers, but she does learn from a servant that Sophie seems to be confined against her will. 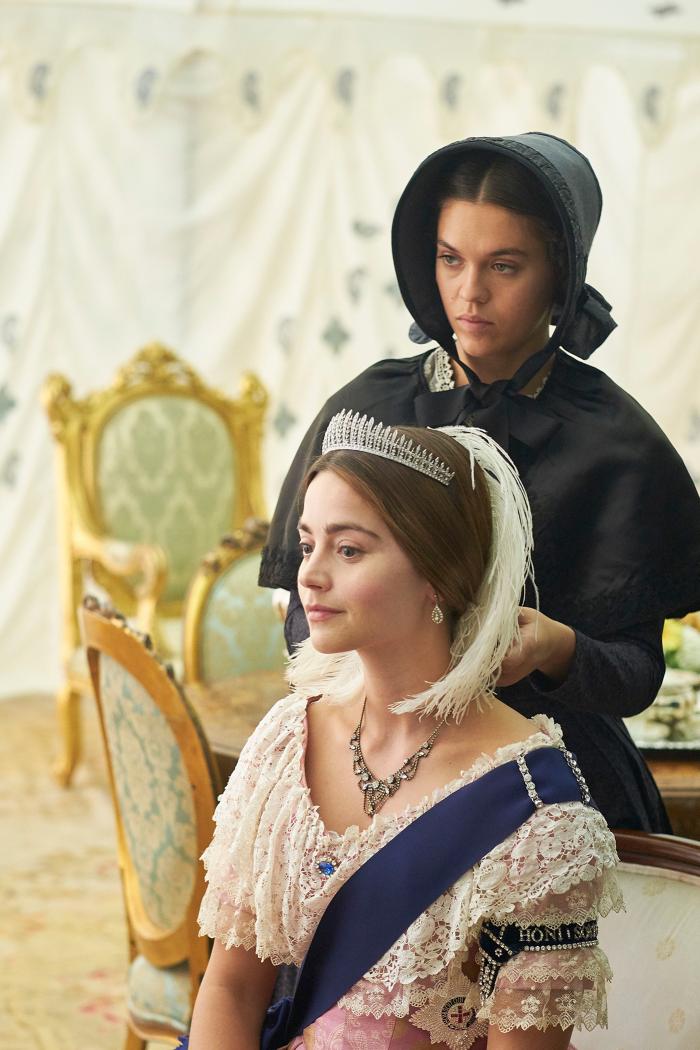 Victoria sends Abigail to learn more about Sophie's "illness." Photo: Justin Slee/ITV Plc for MASTERPIECE Victoria summons Monmouth, who defends himself by claiming that doctors have diagnosed Sophie with “hysterical nymphomania.” She must be locked up for her own good. Victoria issues an ultimatum: she had better see Sophie at the opening of the Exhibition, or else. Overhearing all of this, Joseph flies into a rage – he wants to kill Monmouth. Penge observes Abigail calming Joseph down, and a glint of sympathy appears in his eye.

The night before the Exhibition, Bertie wakes Victoria with a fearful cry: “I think Papa is dead!” They rush to Albert’s study, where Albert is simply deep in sleep in his chair. He’s killing himself over the Exhibition, and starting to have doubts, too. He tells Victoria not to come so as to avoid witnessing his failure. She refuses. When the police warn her that there might be disturbances at the Exhibition, given the crowds and her presence, she also refuses to take their precautions. She wholeheartedly believes in Albert’s dream.

The doubts and fears come to naught. Opening day of the Exhibition is marvelous, and the public is enthusiastic. Monmouth obeyed Victoria’s ultimatum, and Sophie has finally been released from her confinement. Joseph is also at the Exhibition, and finds a way to have a conversation with Sophie away from Monmouth’s prying gaze. He tells her that there’s a boat from to New York from Liverpool tomorrow. Sophie should meet him tonight at the train station, and they can make a new life in America together – but Sophie is torn between staying in England for her son and escaping to America.

Penge observes this exchange, and approaches Joseph afterward – but not to reprimand him. Instead, he apologizes for his animosity, telling Joseph that he misjudged him as someone looking to get ahead any way he can, when he’s truly in love. Joseph replies that Penge’s initial judgment was correct – but then he fell in love with Sophie and gave up his plans to use her. Penge then moves on to Monmouth, returning his bribe and refusing to help him further in his quest to separate Sophie and Joseph.

Following Joseph’s profession of love, another is made. Bertie, enamored of Heidi and nervous about attempts to arrange a marriage for her, proposes to his cousin. She politely refuses the young boy’s fantasy, and tells him that her mother wants her to marry Napoleon. Bertie, upset, runs to his parents and relates the conversation. Albert, realizing he has been duped by Feo, is furious and admits that Victoria has been right all along about her sister. Feo retorts that Bertie doesn’t meet her standards for Heidi anyway; she and her daughter will be leaving in the morning. Victoria, having gotten over her hatred of her sister now that Albert has turned on her, tries to convince Feo to stay.

Feo isn’t the only person to suffer a downfall. Palmerston has offered his resignation to an elated Russell, who has gathered the votes to force him out as Foreign Secretary. But Palmerston’s not out of the game. Emily is confident that a bright future awaits. From now on, she’ll stay in London to make sure that he becomes Prime Minister someday.

And Sophie? Victoria warns her against forgetting her son, and offers her a refuge for the two of them away from Monmouth. As Sophie prepares to leave for the train station, she is met by her son. He had a nightmare that he couldn’t find her.

Nor is the boy the only one with reason to fear the loss of a loved one. Victoria and Albert, finally reconciled and with a successful Exhibition opening behind them, are sharing a loving moment together when Albert collapses. And this time he doesn’t get up.