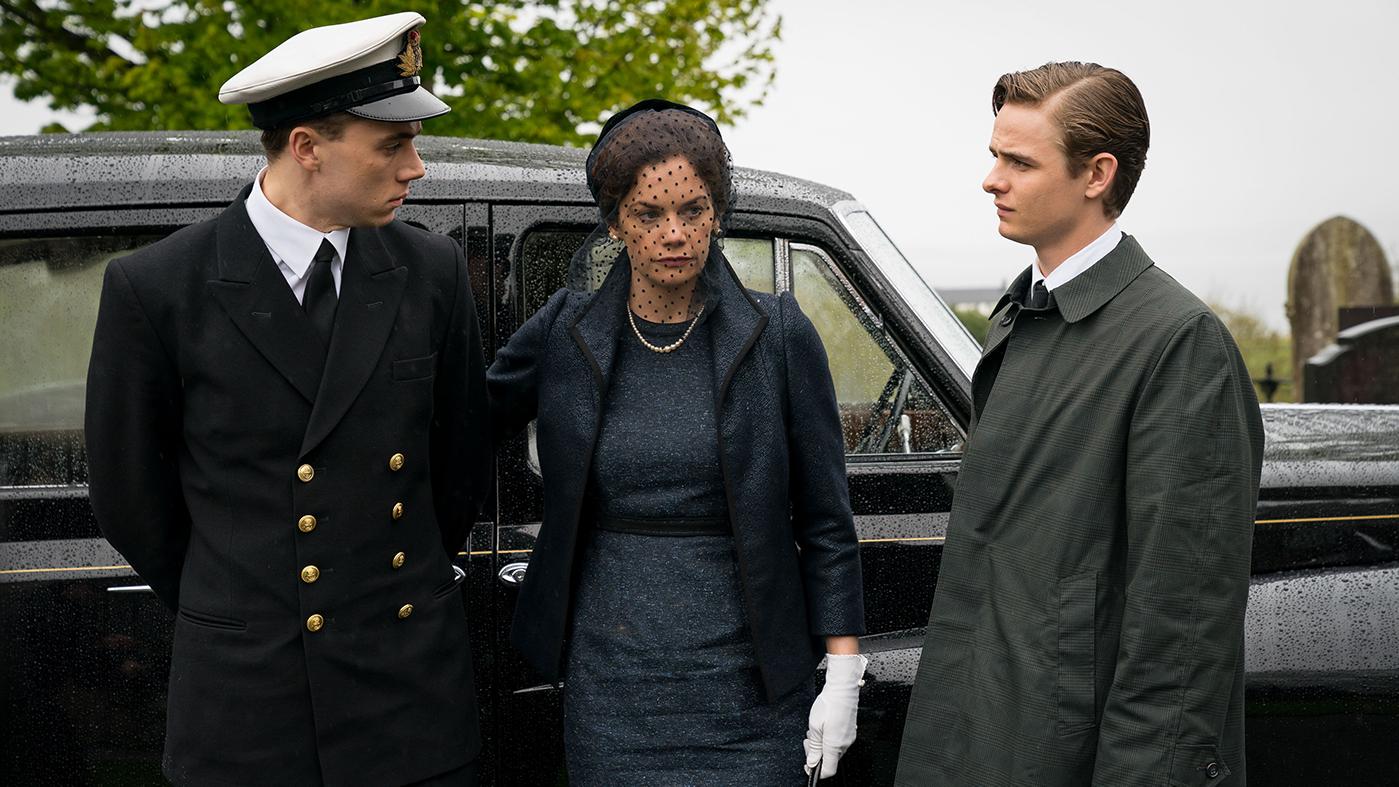 The death of Alison Wilson's husband Alec brings up surprising facts about his life and jeopardizes her relationship with her sons. Photo: WP Films Ltd., Steffan Hill

The second part of Mrs. Wilson airs Sunday, April 7 at 8:00 pm. It is available to stream for a limited time. Recap the final part here.

Once a liar, always a liar. The first sign that Alison Wilson’s husband Alec has been deceiving her doesn’t come until after he’s dead. Much older than Alison, Alec collapses from a heart attack and doesn’t get up. Before the undertaker arrives, Alison takes his wallet and locks it in a desk. That evening, an older woman named Gladys appears at Alison’s door asking to claim Alec’s things; she says she’s his wife. Alison closes the door in her face. Who was it?, her son Nigel asks. Just a disliked cousin of Alec’s, she replies.

Gladys must be Alec’s ex-wife, whom he divorced to marry Alison. He even showed her the divorce papers back when they were first dating, while Alison was a typist working for Alec in the Foreign Office during the war. But then Alec was an intelligence officer who could have easily forged the document, as his government handler Coleman points out to Alison when she visits to ask about Gladys. After all, both of Alec’s jobs required fictions. As an undercover intelligence officer, he lived one; as a novelist, he made them up.

Alison soon discovers that the fiction bled into Alec’s personal life, too. Having been turned away by Alison, Gladys sends her son Dennis to negotiate funeral arrangements. While Alec lived with Alison for the past twenty years, raising their two sons Nigel and Gordon, evidently he also managed to be a good father to Dennis, sending money, visiting on birthdays. He simply told Gladys and her children that he had to live in London for work.

Both Gladys and Alison have arranged funerals; in order to have preference over Alec’s burial arrangements, Alison promises to produce proof of Alec’s divorce from Gladys. It may have been difficult for Alec to divorce since he was Catholic, but she’s certain that he did, whatever Gladys says. 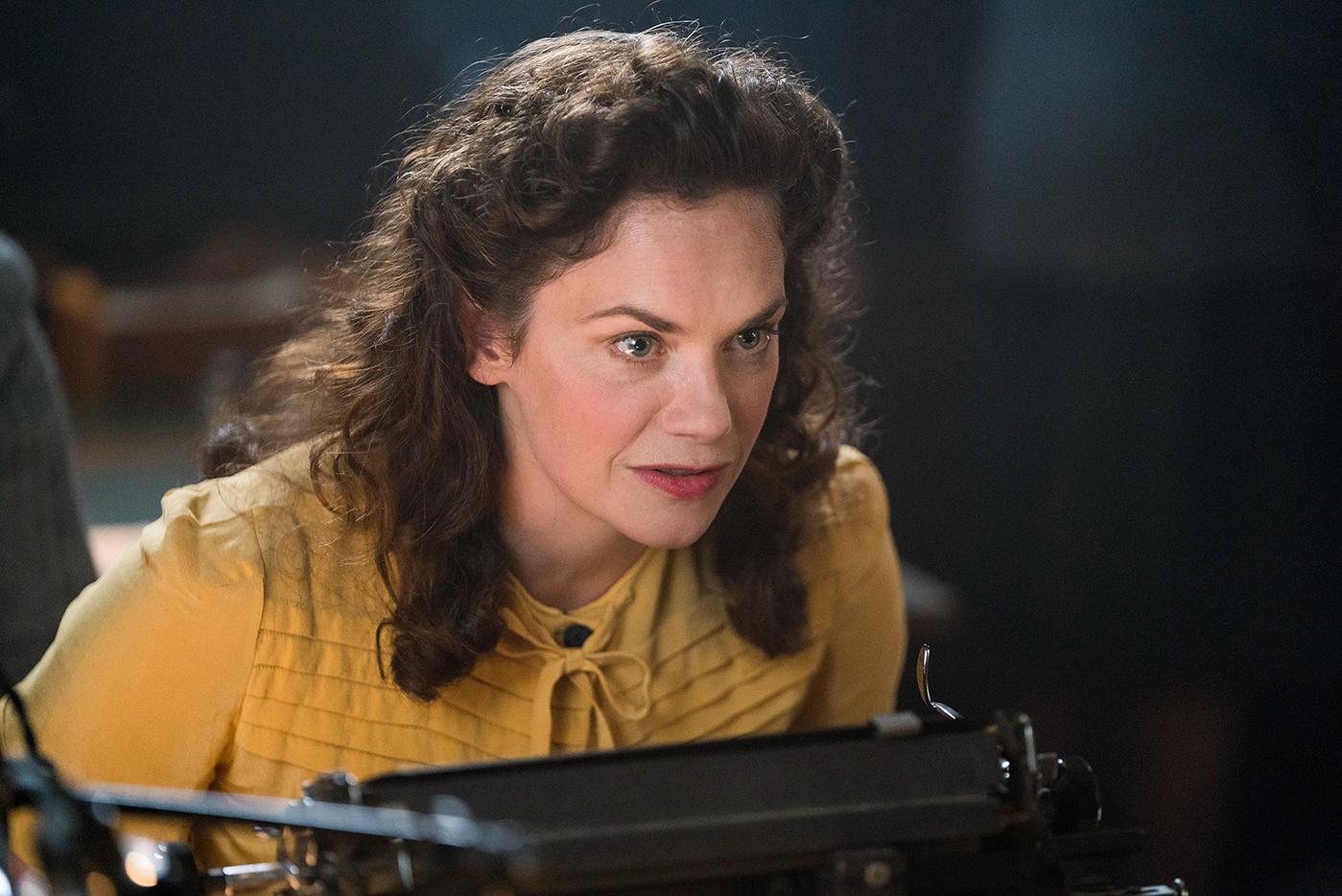 Alison first met Alec while working as a typist for the Foreign Office during the war. Photo: WP Films Ltd., Steffan Hill

And yet the public records office doesn’t have the divorce papers. So Alison, herself trained in deception from her time at the Foreign Office, forges them. But when she brings them to Gladys’s home – where she sees photos of Alec with Gladys and Dennis as well as a letter from him to Gladys – Dennis doesn’t believe they are real. His mother’s sister died in Scotland the day before the divorce papers were signed – she would have been in Scotland, not London, where the papers were notarized.

Dennis threatens legal action if Alison refuses to allow Gladys a funeral, but a compromise is reached instead: Alison will have her own mass in Ealing, then the body will come to Gladys at Southsea for burial. And the coffin must be engraved with the name and birthdate Gladys knew Alec by. Alison reluctantly agrees.

Pulling all of this off without letting her sons find out about their father’s other life requires a fair amount of deception on Alison’s end. Alec always got along with their sons better anyway, and Alison’s strange behavior is now driving Gordon further away from her. She dismisses questions about a man at the funeral who seems to have known Alec well despite the fact that she’s never met him, and tells her sons not to interact with Gladys or Dennis at the burial, continuing to claim that Gladys is an unfriendly cousin.

After the burial, Dennis asks to stay in touch with Alison and meet her sons; they are his half-siblings, after all. She refuses. While she takes one last, solitary moment at the grave, a man approaches from behind. He was Alec’s best friend in India before the war, and he has come to pay his respects. When Alison, still facing away from him, tells him she was Alec’s wife, he calls her Dorothy. Then he sees her face and apologizes, alluding to Alec’s undercover work, and quickly walks away.

Who is Dorothy? When Alison tries to ask the government handler Coleman, she is warned to stop digging, lest she jeopardize her sons’ promising lives. Gordon is in the navy, and Nigel is about to head to university. 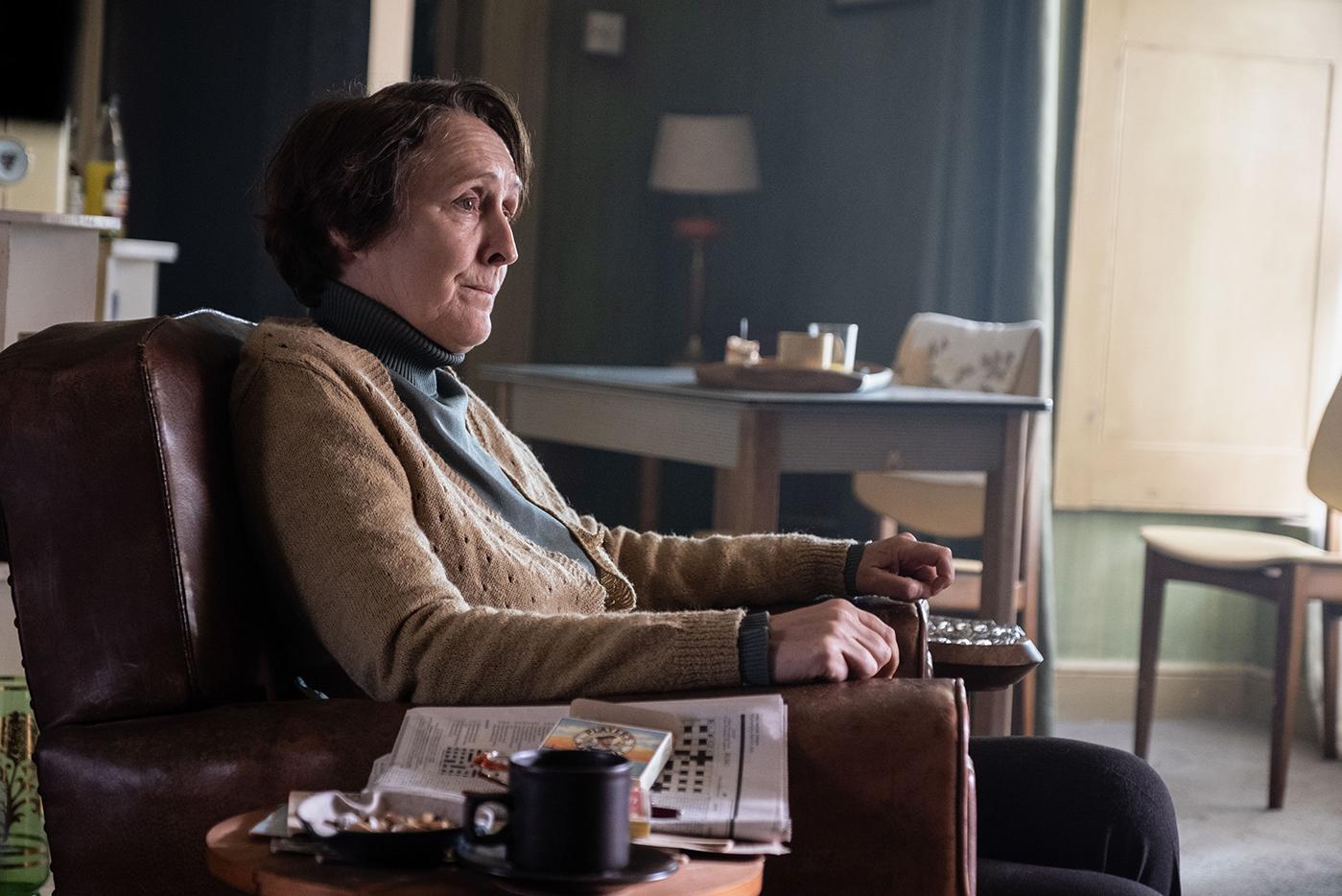 Her sons are doing their own digging. Gordon has written to the government to try to regain Alec’s ancestral home, Blakefield, which was requisitioned during the war and has yet to be returned. Alison doesn’t believe he’ll have success – Alec had been trying for years to get his family property back – but she offers to sign the letter and mail it herself. She also tells Gordon she will look into Alec’s career, steering her son away from making his own inquiries. Alison’s not the only one starting to see the cracks in Alec’s stories.

Alison visits the attic apartment she shared with Alec during the war, after her own apartment was bombed and she sought shelter – and intimacy – with him. She interrogates their former landlord, asking him if he recognizes a woman in a photo she found amongst Alec’s things from India. He confirms her suspicion that the woman is Dorothy – and explains that she lived with Alec in the same attic apartment before Alison moved in. Dorothy and Alec had moved there when they returned to England from London, and they had a young boy named Michael with them.

Alison gets Dorothy’s forwarding address from the landlord. When she arrives at Dorothy’s doorstep, Dorothy tries to do exactly what Alison did to Gladys: close the door on Alison and the trouble she brings. But Alison persists, insisting that if Dorothy attended Alec’s funeral (Alison spotted her there and recognized her from when she first met Alec, twenty years earlier), then Alison deserves to know how Dorothy fits into Alec’s story.

Dorothy lets Alison in, but explains that time is limited because her son Michael is coming to visit and she doesn’t want him to see Alison. She then begins to reveal another hidden chapter of Alec’s life.

Dorothy was an actress in India when Alec met and wooed her. Alec told her (and she still believes) that Gladys was his sister; that was his excuse for sending money to her. Dorothy and Alec married and had a son, Michael, together. When they moved back to London just before the war, Dorothy began following Alec because she didn’t trust him. This is why Alison occasionally ran into her when she was first dating Alec. 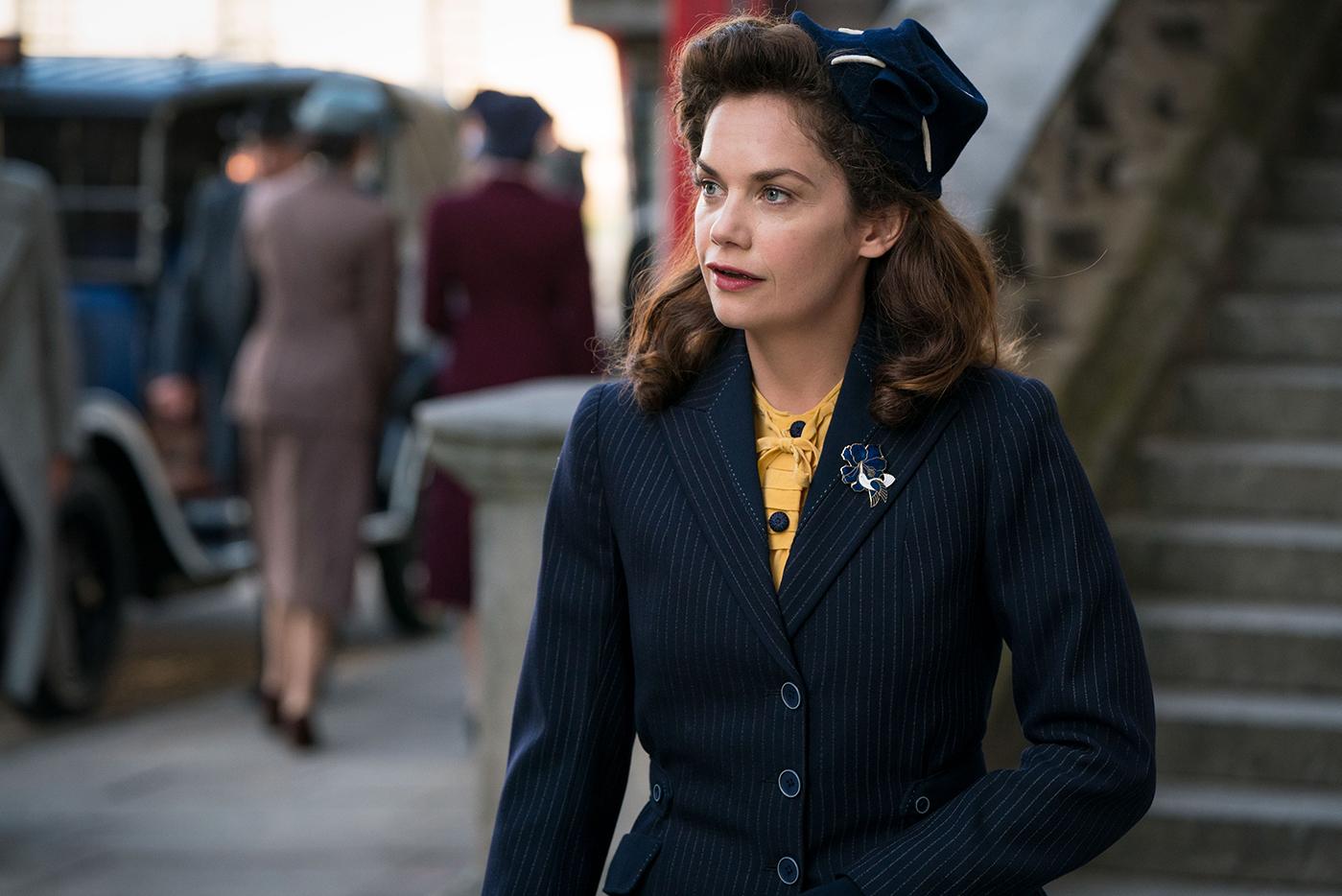 When Alison first met Alec, she often ran into a woman who seemed to be following Alec. Photo: WP Films Ltd., Steffan Hill

When Alec became more interested in Alison, he sent Dorothy and Michael to live with Dorothy’s mother in the country, ostensibly to keep them safe from the German bombings of London. But Dorothy returned after dropping off her son and continued to follow Alec. When she realized he was serious about Alison, she decided to leave and cut ties. The very same day she left is the first time Alison slept with Alec.

To protect her son from the infidelities of his father, Dorothy told Michael that Alec died in the war. Alison nearly ruins this lie when she passes Michael in the street after leaving Dorothy’s house. But upon telling Michael that she knew his father, she decides to leave it at that and rushes off. Before boarding the train back to London, she vomits.

At home, she receives evidence of more lies. The government has responded to the letter about Blakefield. Neither Alec nor any Wilson has ever owned the estate.

So Alec’s promises that his and Alison’s hardscrabble lives would improve after the war when he regained Blakefield were empty. Even though he proposed to Alison as they picnicked on the grounds of Blakefield while she was pregnant with Gordon, he had no connection to the place. It was just a fiction for Alison as they lived in an apartment so shabby and on an income so meager that Alison’s mother told them to give Nigel up for adoption when he was born. Both Alison and Alec vehemently objected to that suggestion.

Alec does seem to have been deeply invested in his children, no matter who their mother was. When Alison visits Shahbaz Karim, the man who called her Dorothy at Alec’s gravesite,  he reveals that Dorothy wanted to have an abortion when she got pregnant, but Alec refused. Instead, he and Dorothy got married – except it was a fake marriage organized by Shahbaz, because it was difficult for the Catholic Alec to divorce Gladys. 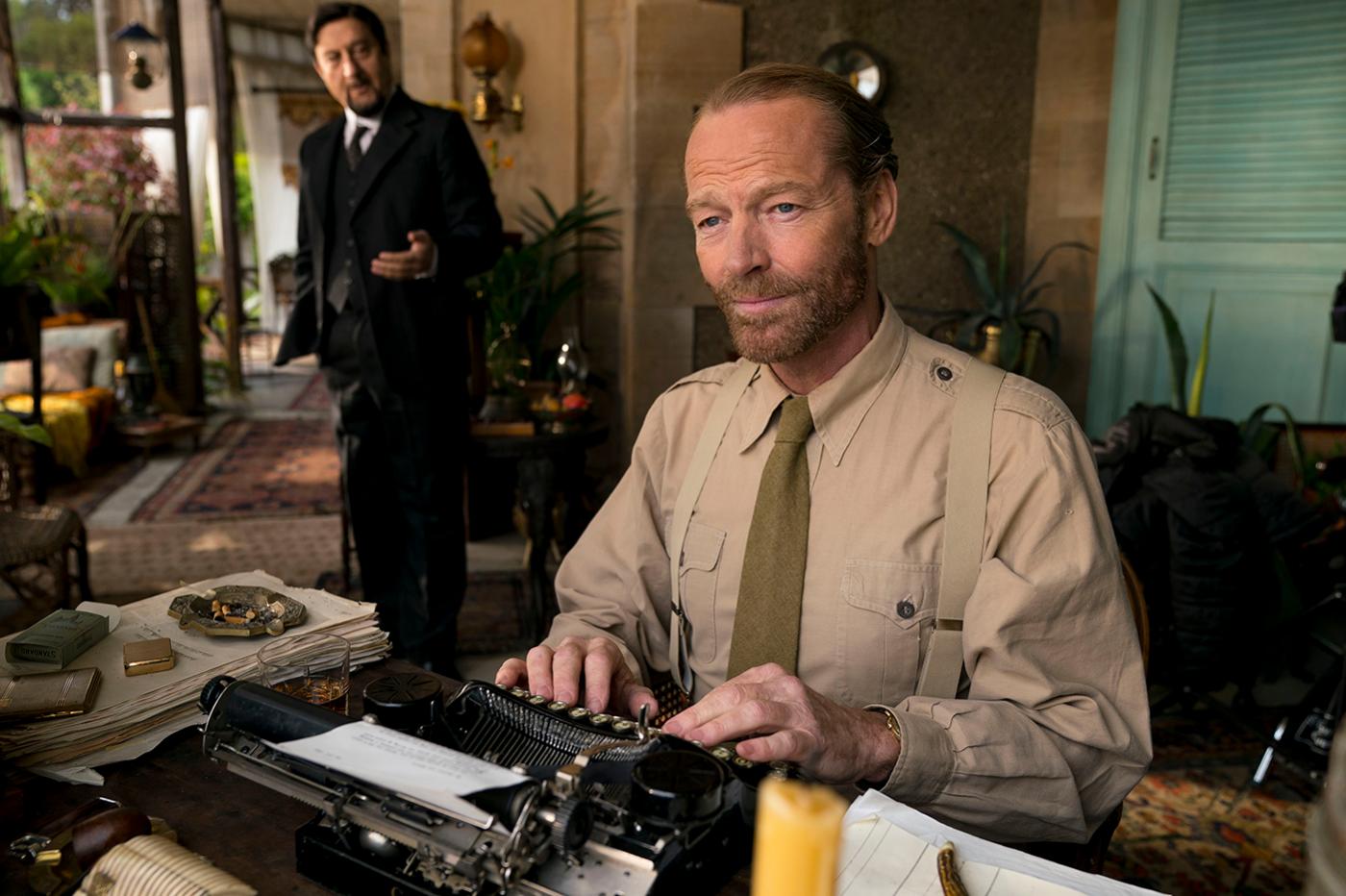 Shahbaz is the person who introduced Alec to Dorothy in the first place. Alec was an elite intelligence agent, and Shahbaz was his handler in India. Alec needed a way into Indian high society, so Shahbaz created a fake affair between him and Dorothy. At first, Alec was uncomfortable denying the existence of his family back in England, but soon he began to enjoy the deception, and the fictional affair became real.

So Alec had three wives (even if one wedding was staged), zero divorces, and children from all three marriages. Twenty years of Alison’s life – her marriage, her children – have been turned upside down. In desperation, despite her skepticism about religion, she tells the local priest that Alec deceived her and asks what to do about her children. He advises her to protect them from Alec’s lies. So she forges a letter from the government saying that Blakefield is still being used as a training base and cannot be returned. She sets out an elaborate spread for tea to welcome the boys home.

But Gordon has made some calls on his own. He knows Blakefield was never owned by Alec and that his job history seems falsified. So where did the letter come from? Is Alison lying, too, just like Alec? Overwrought, she screams at him to take Nigel and get out.

Alison has lost her husband, her idea of who he was, and now her sons, too. All she can do is continue to dig into Alec’s fictions. She takes his wallet out of the locked desk and empties it. Realizing there’s something in the lining, she cuts it open. Inside is a card for a pawnbroker named Urquhart.