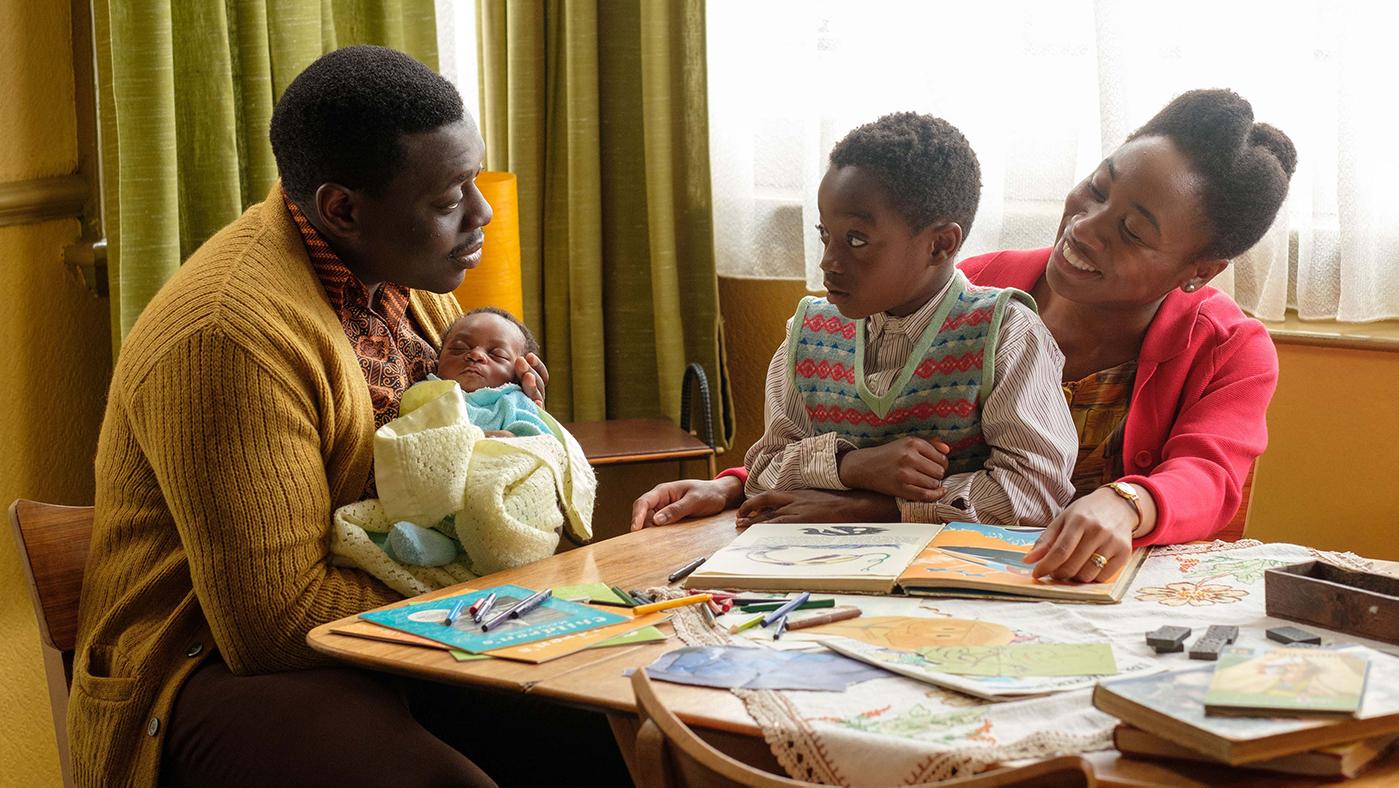 The Aidoo family have a bright future in their new home in Britain. Photo: BBC/Neal Street Productions

The Aidoos have a bright future ahead of them, despite the indignities and challenges of being a Ghanaian family in a racist country. They have applied for British citizenship and the husband, Joel, has a decent job as a mail carrier with the possibility for promotion. Plus, the wife, Flora, is pregnant again. She may be anemic, but then she was back when she carried their son Matthew.

It is slightly worrying when supplements fail to raise Flora’s iron level, but it’s nothing serious; she’ll just have to deliver at the maternity ward instead of at home. But when she goes into labor, it takes a while for Matthew – who’s home from school because of severe growing pains – to find Joel. By the time the midwives arrive, Flora is too far into labor to go to the hospital.

So Sister Hilda and Trixie settle in at the Aidoo home, with Hilda briskly ordering Trixie around. They deliver a baby girl with no complications. While Hilda chats about cultural rituals, she fails to catch a dangerous development in Flora. Luckily, Trixie is there to notice Flora’s rapid pulse and excessive bleeding. Taking over from the domineering Hilda, she orders an injection, and Flora eventually stabilizes.

Trixie is troubled. After bringing Flora to the hospital for a blood transfusion, she tells Doctor Turner that she observed similar symptoms – anemia before birth, bleeding after – in two West African migrant women when she was in South Africa. One of them told Trixie that a sickness like that seems to run in families in West Africa. 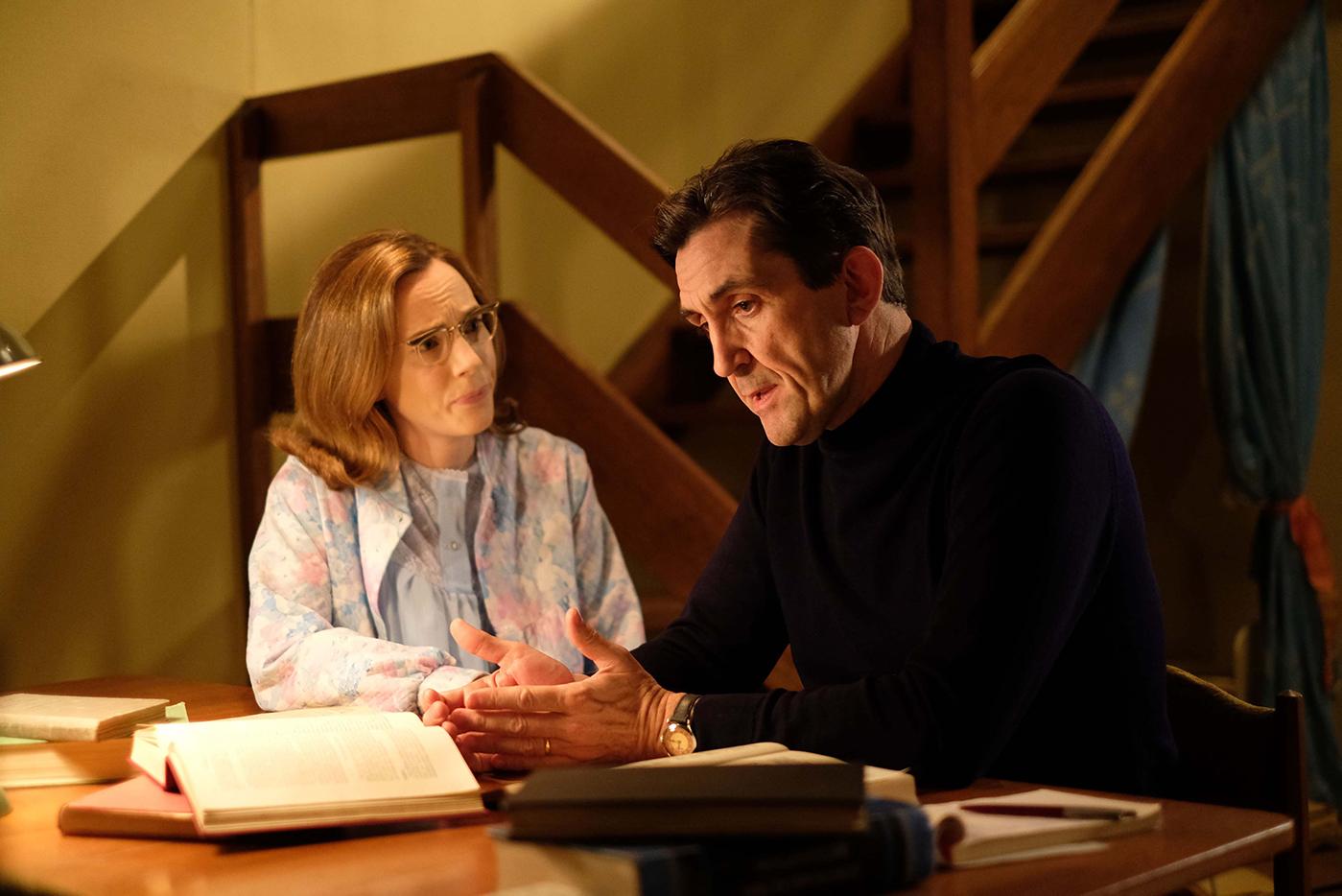 Doctor Turner looks into it and discovers that Flora must have sickle cell anemia, which is more common in West Africans. When he goes to the Aidoos to inform them of his diagnosis and says that it can shorten life expectancy and is often accompanied by pain in the limbs, Joel realizes that he must have it, too. The pain is sometimes so great that he can barely finish his mail route, but he has hidden it from Flora because he needs to keep this job – despite his postgraduate education, few employers will hire a black man for a desk job. Since both Aidoo parents have it, their son Matthew is also at risk – the anemia might explain his “growing pains.” Doctor Turner takes a blood sample for testing.

The news is bad – and it comes at a worse time. When Doctor Turner arrives at the Aidoos’ home to tell them Matthew also has the disease, he finds Joel in crisis. He’s suffering from an outbreak of pain so severe that it forced him home in the middle of his mail route. Doctor Turner gives him a shot to quiet the pain.

There’s not a shot to solve Ms. Millgrove’s crisis. When she stops showing up at the clinic for treatments for an open wound on her leg, Lucille is sent to her home to investigate. A neighbor tells Lucille that Ms. Millgrove hasn’t been seen in weeks and that she refuses to open the door for anyone. But Lucille learns that Ms. Millgrove has been paying a young girl named Maureen to bring her groceries, and the nurse convinces Maureen to tell her how she gets in the house. Lucille reaches through the mail slot, finds a key on a string, and lets herself in.

Books, cans, and newspapers line the walls and floors in towering stacks, and Ms. Millgrove sits napping amidst the junk in an old armchair. Lucille wakes her and dresses her wound while the ornery Ms. Millgrove lectures her. She was an ambulance driver during World War I, so she at least had some medical experience to keep her wound clean. But Lucille has to report the home; its clutter and filth is dangerous for an older woman. She promises to return to help Ms. Millgrove clean out the house. 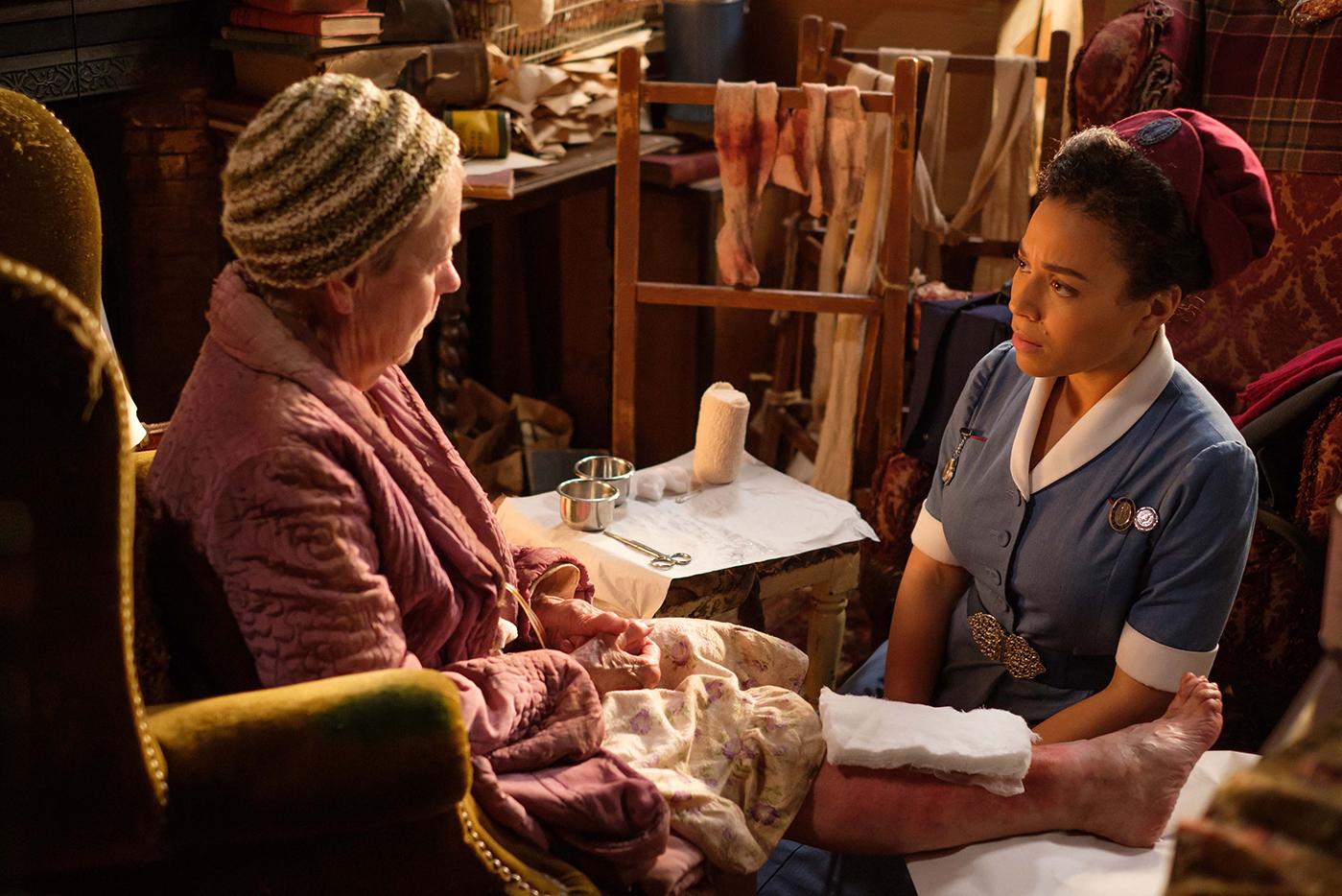 Ms. Millgrove is an ornery hoarder who doesn't want to accept aid, despite her age. Photo: BBC/Neal Street Productions

Sister Monica Joan hears that Ms. Millgrove has loads of books, and the nun’s love of reading leads her to join Lucille in cleaning. The two older women bond over some shared favorite books. But not much progress is made, as Ms. Millgrove refuses to get rid of most of her possessions. When Lucille returns another day, she finds the hoarder collapsed on the ground. She isn’t hurt, but seems to have been there for a long time.

So Lucille brings a woman to arrange household aid and services. Ms. Millgrove says she doesn’t need waste-pickup services, as she doesn’t need to use a commode – even though her own toilet is treacherously far away, outside. The woman suspects that Ms. Millgrove has been hiding her waste, since she can’t get to the bathroom, and, indeed, she finds many wrapped parcels shoved into the chimney. Ms. Millgrove is going to have to move into a nursing home.

Sister Julienne is worried that Lucille is wearing herself out working with Ms. Millgrove on her days off, but Lucille wants to at least see her off to the nursing home. As an immigrant, she know what it’s like to leave a home you love.

When the ambulance arrives to take Ms. Millgrove to the nursing home, Lucille comforts the older woman and takes a parcel of the possessions she wants to take with her, then leaves her for a last moment alone with her house. But then Ms. Millgrove locks the door and refuses to come out.

Amongst her possessions, Lucille and the other nurses find a suffragette medal commemorating a hunger strike. Fred doesn’t understand the fuss over this; he’s never been one to care too much about voting. The women are appalled at his indifference, especially given that Violet is running for town council and Fred has been scant in his support.

A court grants an emergency order to remove Ms. Millgrove from her home. Sister Monica Joan protests this insult to a brave woman’s dignity, and implores Lucille to convince her to leave of her own accord. 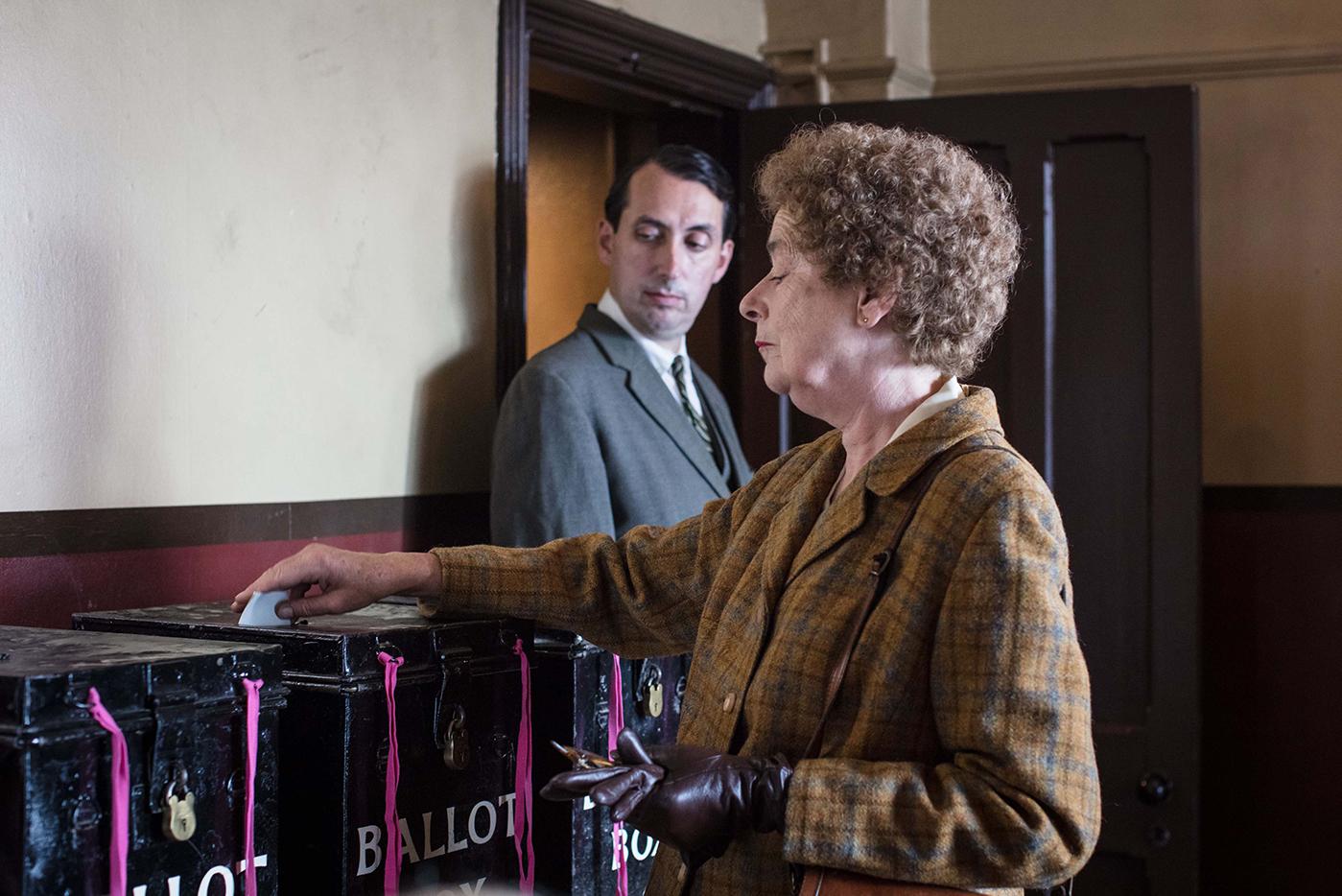 Phyllis is proud to vote for Violet for town council, especially after learning about a patient who was a suffragette. Photo: BBC/Neal Street Productions

Lucille finds a scene at Ms. Millgrove’s house. The police are outside, ready to kick down the door, Fred is there with the volunteer ambulance corps, and Ms. Millgrove is throwing things out her window at the gathering crowd. Inspired by Sister Monica Joan’s entreaties, Lucille blocks the door from being knocked down, then is quickly pulled inside by Ms. Millgrove to help in her defense. Once inside, however, Lucille turns to convincing the older woman to go peacefully: her home has become a prison. Ms. Millgrove recalls her hunger strike; Lucille remembers leaving her own home.

Finally, Ms. Millgrove walks outside of her own volition, proudly wearing her suffragette medal. Fred escorts her to the ambulance, awed by her strength. He later apologizes to Violet for not supporting her more fully and praises her courage to run for town council. He will vote, after all.

Lucille goes to visit Ms. Millgrove in the nursing home the next day. But her new friend has died peacefully in her bed. She has left behind a book for Sister Monica Joan, another book filled with cash for the girl, Maureen, who brought her groceries, and her medal for Lucille. Lucille proudly pins the medal on and goes to vote.

And the Aidoos? They may not be able to vote yet, but Joel has at least gotten a promotion, plus time off for medical appointments. Their future may be a bit less bright, but they are happy enough for now.