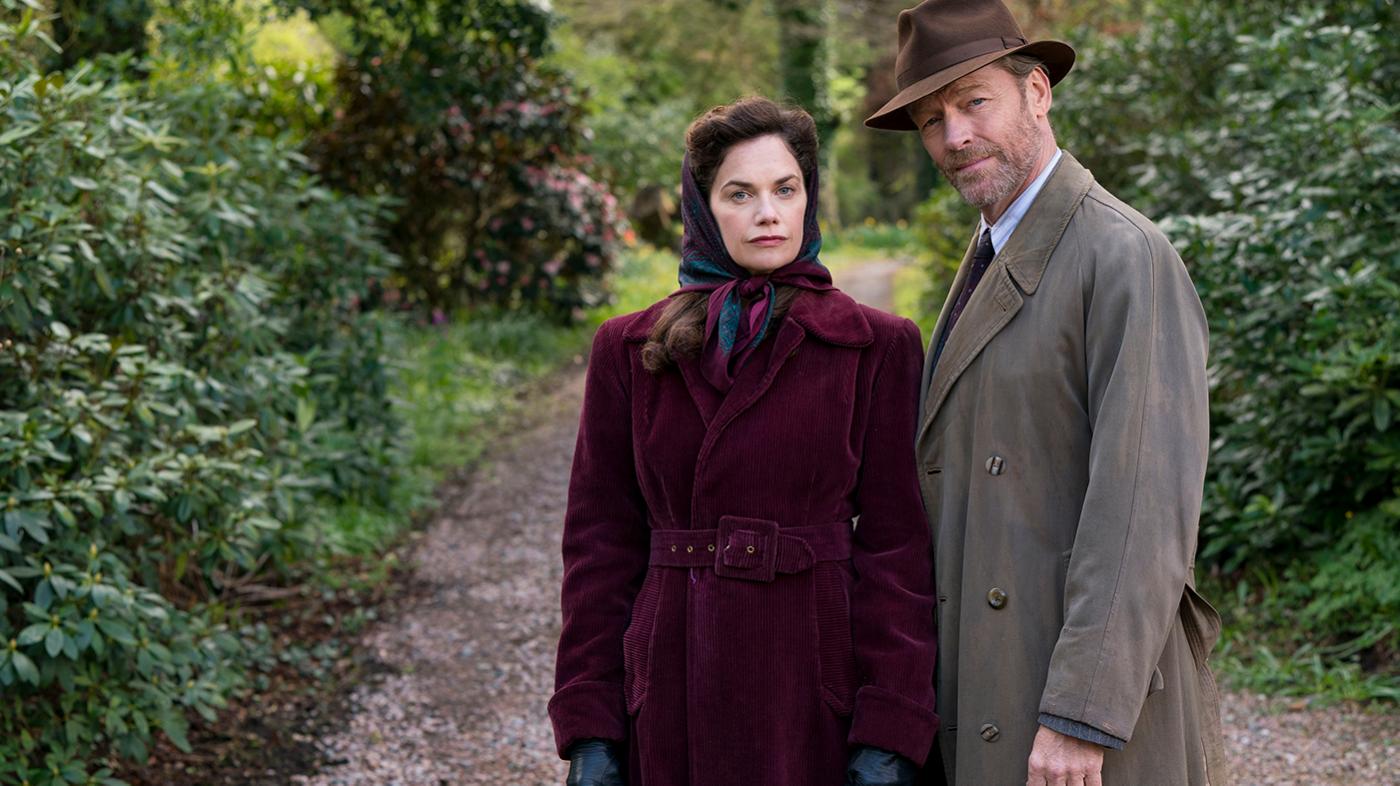 What else did Alec hide from Alison? What can she believe? Photo: WP Films Ltd., Steffan Hill

Mrs. Wilson is available to stream for a limited time. Recap the previous episode here.

The phone number listed on the pawnbroker’s card Alison found hidden in Alec’s wallet is disconnected, but it does bring back memories of another rocky time in her relationship with her husband. In 1944, Alec was sent to prison for theft, so that he could infiltrate a group of Fascists in the jail. But the Foreign Office paid Alec poorly (the impoverishment was a cover for his spy work), and Alison couldn’t take the difficulties of poverty plus single motherhood while Alec was in jail. She old her wedding ring to buy train tickets and went with her two sons to stay with her mother.

Now Alison is reliving the doubts she had back then. Did Alec even work for the Foreign Office after they married? Back then, when he appeared at her mother’s house with a pay raise after being released from prison, he convinced her to trust him by having her follow him in London; and she saw him meet with her old boss and his handler Coleman.

But now Alison is not sure that was proof. When she visits her son Gordon to apologize for forging the letter from the government about Alec’s supposed family estate, he tells her he once saw Alec in a porter’s uniform at a hospital. Alec told Gordon he was volunteering; now that Gordon has looked further into his father’s past, he doesn’t believe the excuse.

Alison visits the hospital and speaks to Bert, the man who appeared at Alec’s funeral and said he knew him from the hospital. He says that Alec did work as a porter, and that Bert used to cover for Alec once a week, when Alec would visit a chain-smoking woman he called the “boss.” Alison recognizes Coleman from this description. 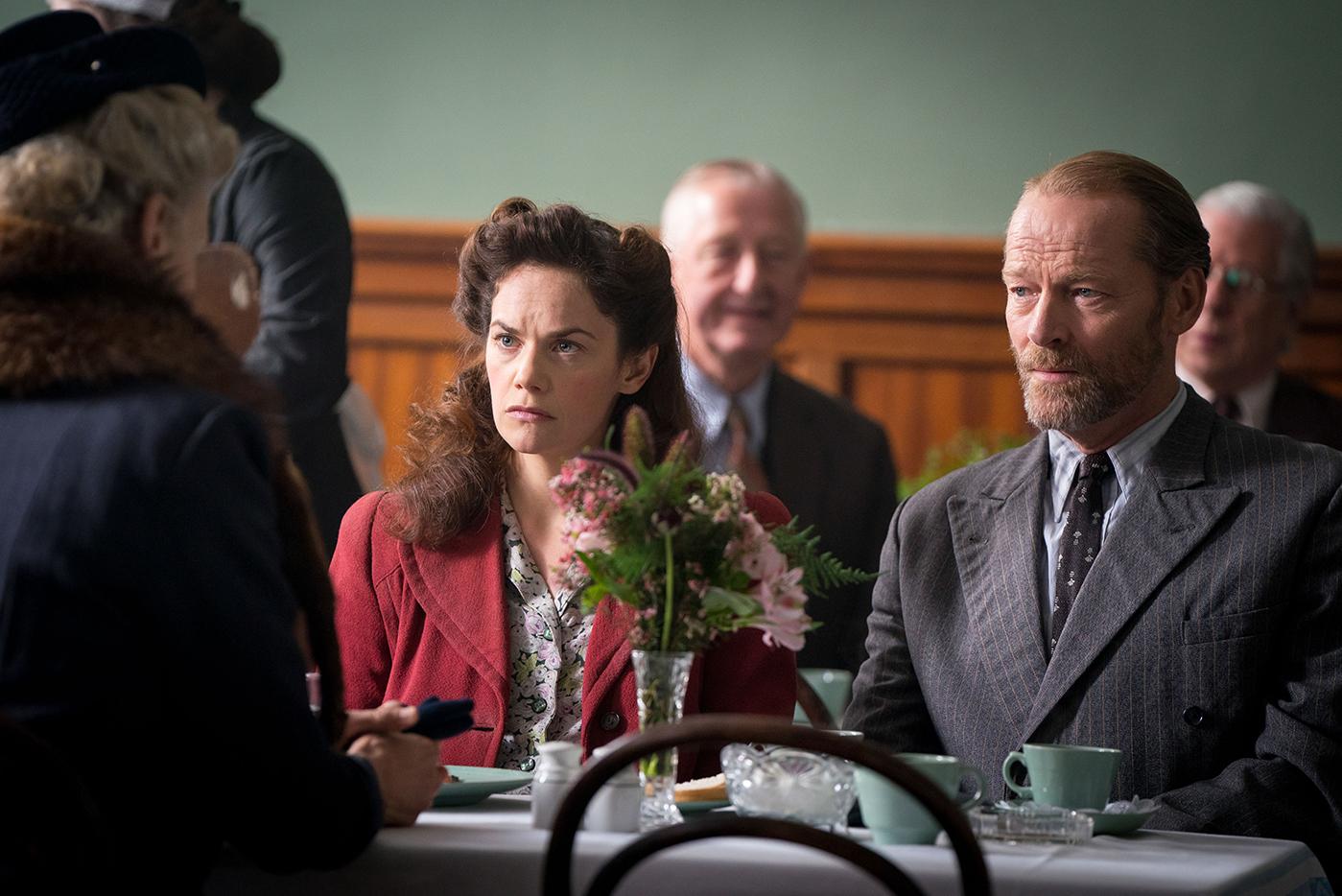 She confronts the government handler and demands to know more about Alec. Coleman warns her that she won’t want to know the truth, but when Alison persists, Coleman finally acquiesces. Alec was fired from the Foreign Office in 1942, soon after he married Alison, for embellishing facts in his transcriptions of calls containing valuable intelligence. When he told Alison he was in Egypt working, he was actually in prison. The later prison term Alison knew about was not fake, as Alec claimed. He and Alison were poor because he couldn’t get a good job as a result of his criminal record. He continued to meet with Coleman because the Foreign Office didn’t trust him; he was under her surveillance.

This is more than Alison can take. She goes to church and begins pounding her fists and yelling out pleas. The priest finds her collapsed on the floor. He bandages her damaged hands, suggesting that she go stay with a community of nuns for a while to recover from her grief.

But Alison makes one more effort to unearth Alec’s past and perhaps redeem him. Using skills learned from her time in the Foreign Office, she had earlier discovered an erased phone number on the back of the pawnbroker card. She has called it continually, but only now, in her darkest moment, does someone finally pick up.

It’s Shahbaz Karim, Alec’s friend and handler from India. He tells Alison they need to talk.

Karim fills out Coleman’s story. Alec was framed by a group of double agents who wanted control of his embassy phone line so that they could have direct contact with Moscow. Alec’s tendency for exaggeration and love of telling stories made him vulnerable to their charge of fraud. 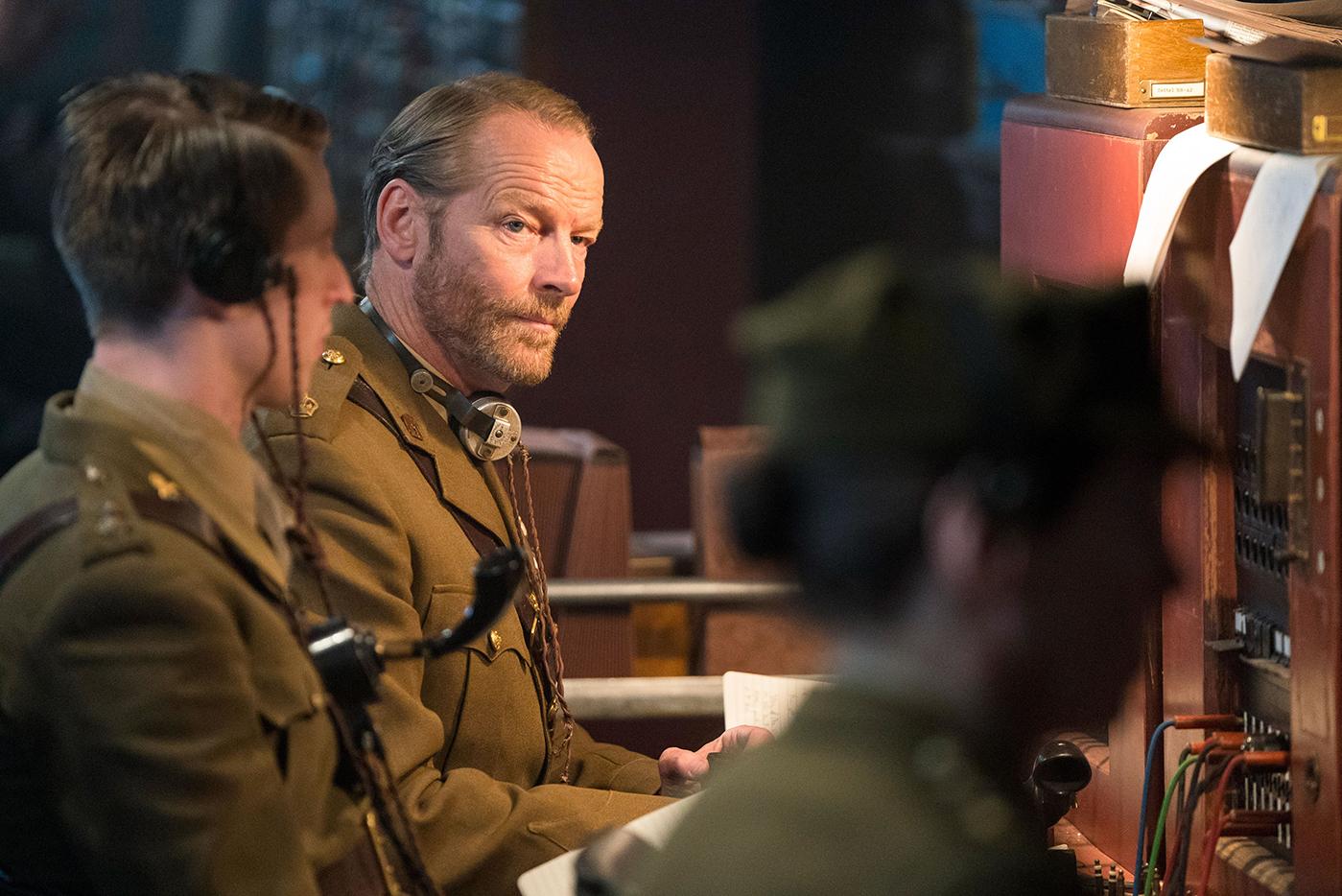 Alison has begun to question whether Alec even worked for the Foreign Office after they married. Photo: WP Films Ltd., Steffan Hill

Alison has uncovered too much deception to believe this improbable-sounding story. But a call from her son Nigel checking in on her gives her the courage to try to have faith in Alec. She returns to Karim, who shows her letters Alec wrote pleading his innocence; once people started believing him, he was framed by the same double agents for theft, a charge from which he couldn’t recover. He never told Alison about his struggles because he wanted to protect her – and then he might have started to believe his own lies.

But Alison still wants proof. When she left Alec in 1942, she asked him how she could ever trust that his prison sentence was fake. He told her to check the records office; there would be no record of his supposed crimes. Alison never did this back then, Alec having restored her trust in other ways, but now she does – and there are no records of any crimes committed by Alec.

This isn’t concrete evidence, but it inspires confidence in Alison. Alec loved his country: why would he jeopardize the war effort by fictionalizing important transcripts? “He did everything for his country and you destroyed him,” she tells Coleman, who tells Alison she will never find official proof either way.

Ecstatic in her newfound confidence in Alec, Alison calls Gordon: “He loved us,” she tells him. No matter what mistakes he made. Alison has come to terms with the past; it’s over.

Except it’s not. A young boy sits on a bike outside Alison’s house, waiting for someone. She asks him what he’s doing. His mom is on the way, he says – they need to speak to his father, who lives there and has stopped sending money.

Alison shuts the door on the boy as his mother walks up. She sinks to the floor, drained and devastated. The mother knocks on the door; her name is Elizabeth Wilson. She needs to speak to her husband. 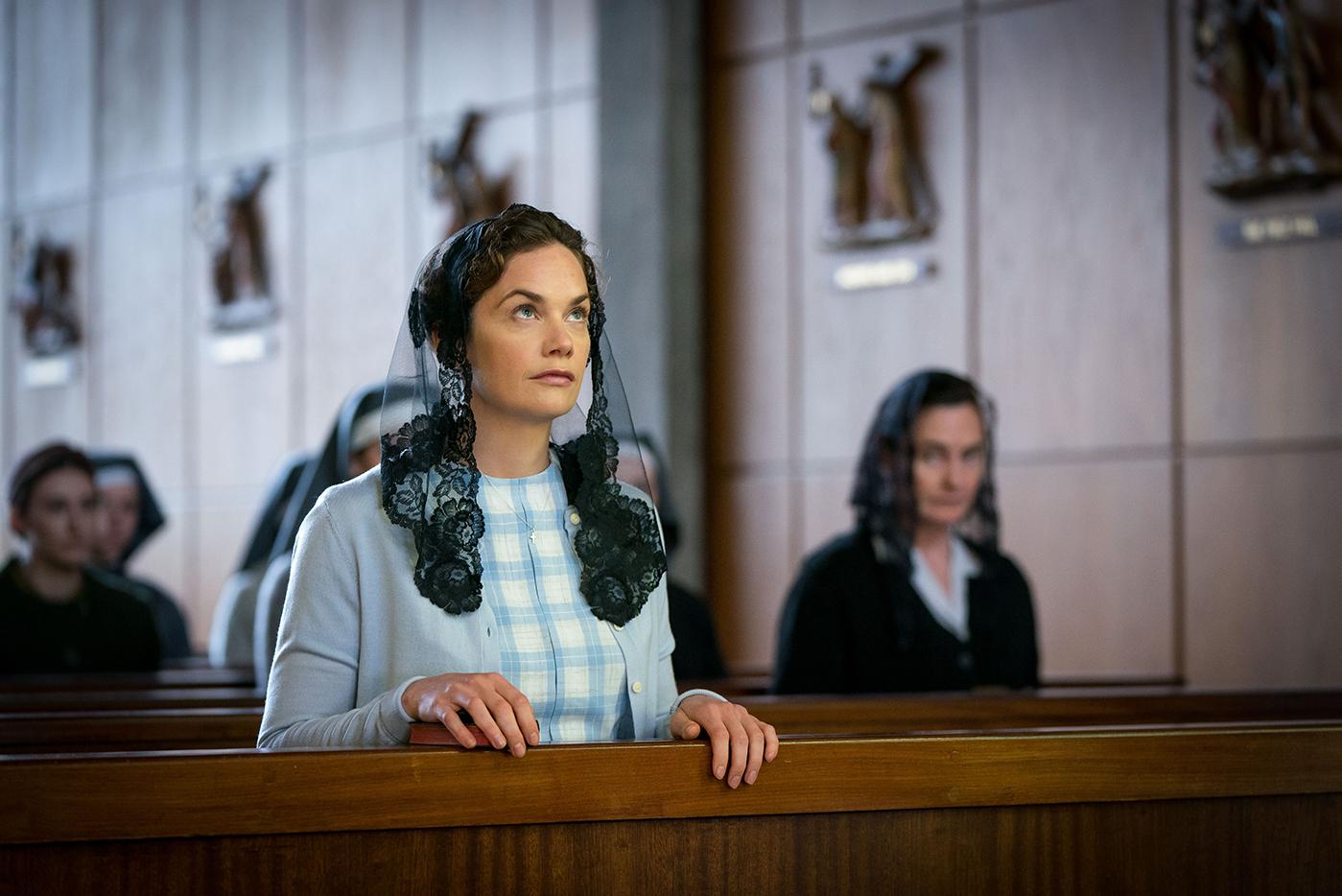 Although she is not religious, Alison begins to find refuge in a priest and a convent. Photo: WP Films Ltd., Steffan Hill

Alison decides to destroy any traces of the past. She burns photos and Alec’s novels; she sells the house and moves into the convent suggested by the priest. After a couple of years there, after Gordon has married and had a child, she herself decides to become a nun. She splits the proceeds from the sale of the house between her two sons. She meets Dennis, the son of Alec and his first wife, Gladys, and asks him if he regrets learning the truth about his father. “I’d rather know the truth,” he says.

So Alison writes out everything she has learned about Alec and sends it to her sons in a letter. She investigates one last loose end and visits Blakefield, the home Alec said belonged to his family. There, she speaks to the matron of the house, who did in fact know Alec. He was a patient there after World War I, when it was a military hospital and he was suffering from PTSD. It was at Blakefield that he started writing novels – they eased his trauma, allowing him to give his war stories a happy ending.

Alison has also managed to write her own happy ending of sorts. In revealing the truth of Alec’s many lives to her sons, she told them that she forgave their father and hoped that they might someday be able to meet their half-brothers and extend their loving family. And in 2007, the real-life surviving sons of Alexander Wilson did finally meet. We see them gathered in a room, smiling, as their children and grandchildren appear, all the descendants of one enigmatic, story-loving man and an indomitable, forgiving woman.