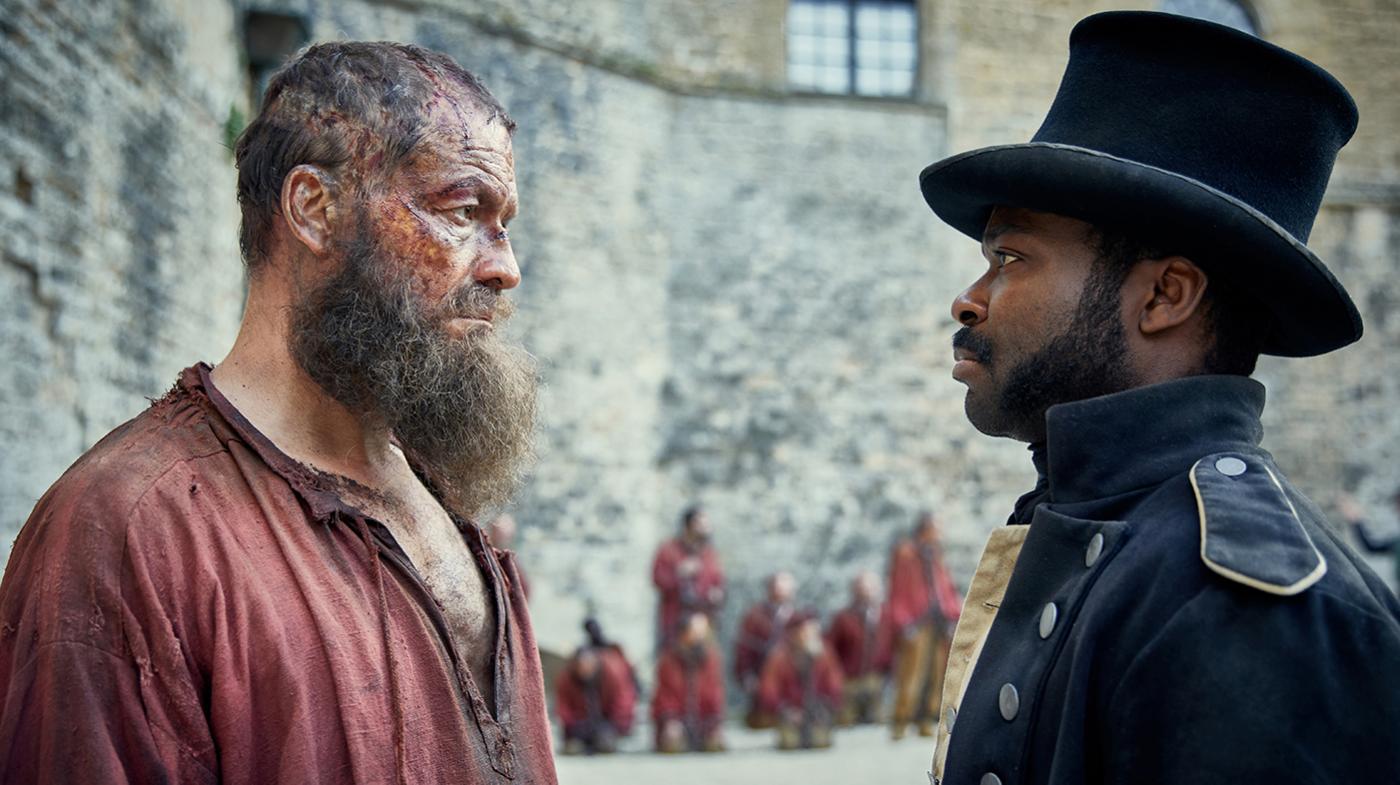 Javert believes prisoner 24601 is a born criminal who will be sent back to prison as soon as he is released. Photo: Robert Viglasky / Lookout Point

Les Misérables is available to stream. Read our recap of the following episode.

In the preface to Les Misérables, Victor Hugo explains that he wrote the sweeping novel because there exist “decrees of damnation pronounced by society, artificially creating hells amid the civilization of earth.” We begin this new adaptation of Hugo’s classic with a view of one such hell: the corpse-littered field of Waterloo on the day after Napoleon’s defeat there. Both crows and men pick at the bodies, the crows for meat, the men for valuables.

Soldiers appear and shoot at the men. Soon, only one is left standing. He loses the soldiers over a rise, and sees a hand with a gold ring sticking out of a pile of bodies. As he takes the ring and pulls the body from under other corpses to grab more baubles, the body stirs. The formerly buried soldier thanks the man for saving him, not realizing his theft, and introduces himself as Colonel Pontmercy. As the man rushes away, Pontmercy asks for his name, in case they both escape this hell. It’s Thénardier; he scampers off.

Pontmercy does manage to survive, and makes it back to Paris. There he visits the well-appointed home of his deceased wife’s father, who has been taking care of his son Marius. But the monarchist Gillenormand refuses to let the revolutionary, Napoleon-supporting Pontmercy interact with Marius. Instead Gillenormand will teach the boy that his father is a scoundrel for his politics. Luckily, Marius’s nurse Nicolette is more sympathetic, and secretly tells Pontmercy that he can see his son when she takes him to church every Sunday.

We are then introduced to a fresh hell: the infamous Bagne of Toulon, a prison where inmates are housed on ships in inhumane conditions and forced to labor under the keen lash of guards. An indiscretion – even a perceived one – can get you killed by firing squad here. When a particularly cruel guard stands near a cliff face that prisoner 24601 is working with a pickax, 24601 redoubles his efforts and triggers a rockslide that pins the guard. 24601 then saves him by lifting the rocks that crush him.

That evening, the overseer Javert interrogates 24601 about the incident. These two men clearly hate each other. Javert, proud that he escaped destiny by becoming an overseer despite being born in prison to two criminal parents, believes men gain their place in society based solely on their own character. 24601, who has only a year left in the nineteen-year sentence he is serving for stealing a loaf of bread, is clearly a born criminal in Javert’s eyes. 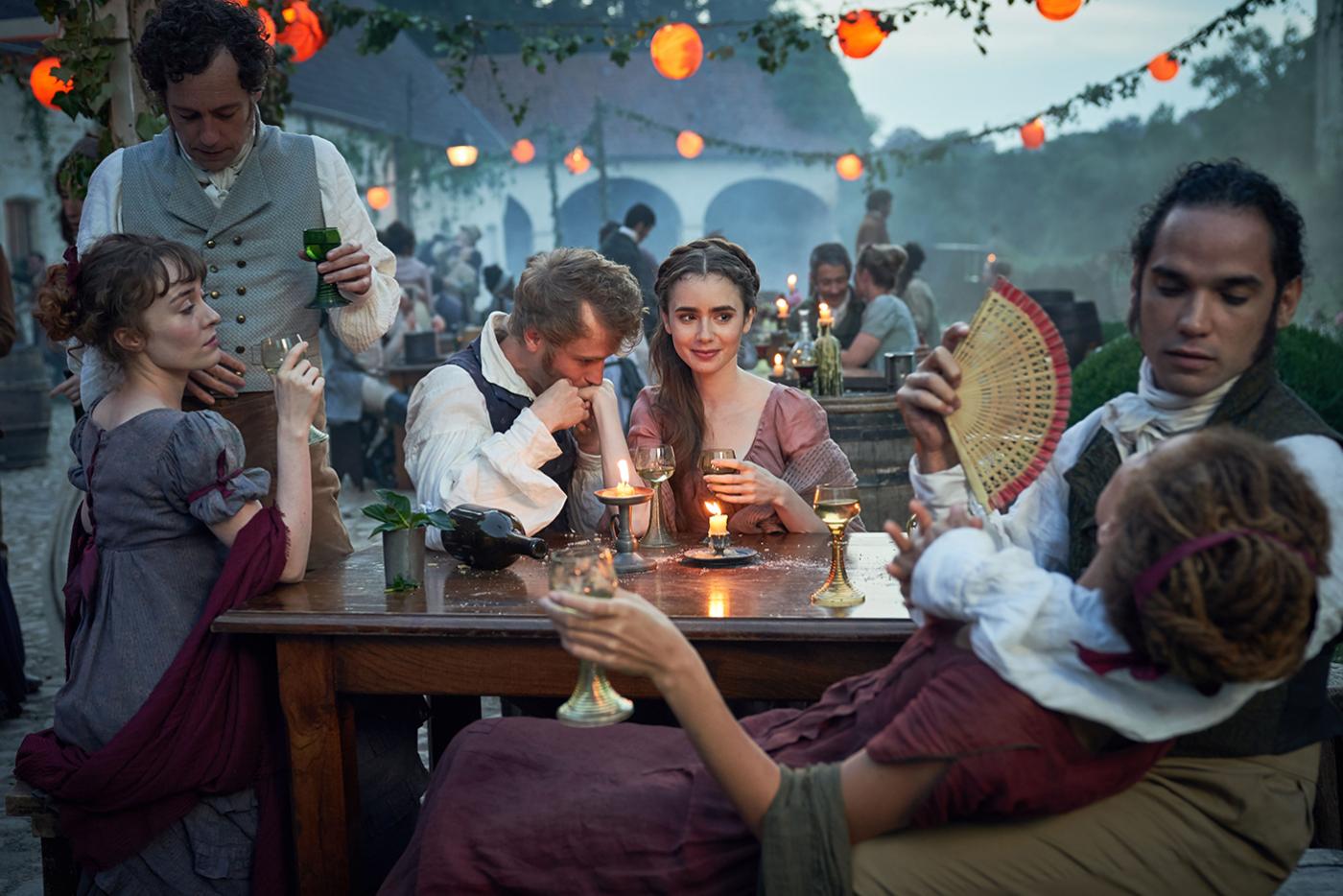 Fantine and her friends may be poor, but they have wealthy beaux to shower them with gifts. Photo: Robert Viglasky / Lookout Point

Finally, we encounter a sort of heaven. Fantine and her friends Favourite and Zéphine may be poor seamstresses who work under a demanding mistress, but, as beautiful young women, they are able to attract some wealthy men who shower them with gifts and gluttonous feasts. The cynical Favourite warns the wide-eyed Fantine against falling in love with her benefactor, Félix Thomolyès; Favourite knows that he and his friends will eventually be called back to their country estates to marry suitable women chosen by their aristocratic fathers. Enjoy the ride while it lasts, and get as many gifts as you can, she advises.

But Fantine is naïve and impressionable, and quickly falls in love with the charming Félix. He woos her and coerces her – only she can ease his “suffering” – into sleeping with him, promising to be good to her, always.

A year later, 24601 is released with a virtual promise from Javert that the world will be bad to him, always. Javert suspects he will soon be back in prison – plus 24601 will be haunted by his ex-convict status, in the form of the yellow passport he must present wherever he goes. The pay for 24601’s nineteen years of labor is miniscule, less even than what he had calculated. But at least 24601 has his name back. He screams it to the world as he walks away from Toulon: he is Jean Valjean.

Made strong by his years of backbreaking labor, Jean finds one-off work as a porter in the first town he reaches. But, because he is an ex-convict, he is cheated out of the full pay. His yellow papers also prevent him from finding a place to stay, even at the inn. As he settles in for the night on a bench, a woman suggests he try knocking on the door of a nearby house. There, a kindly old Bishop welcomes him in, offering him food and a room and refusing to accept money. 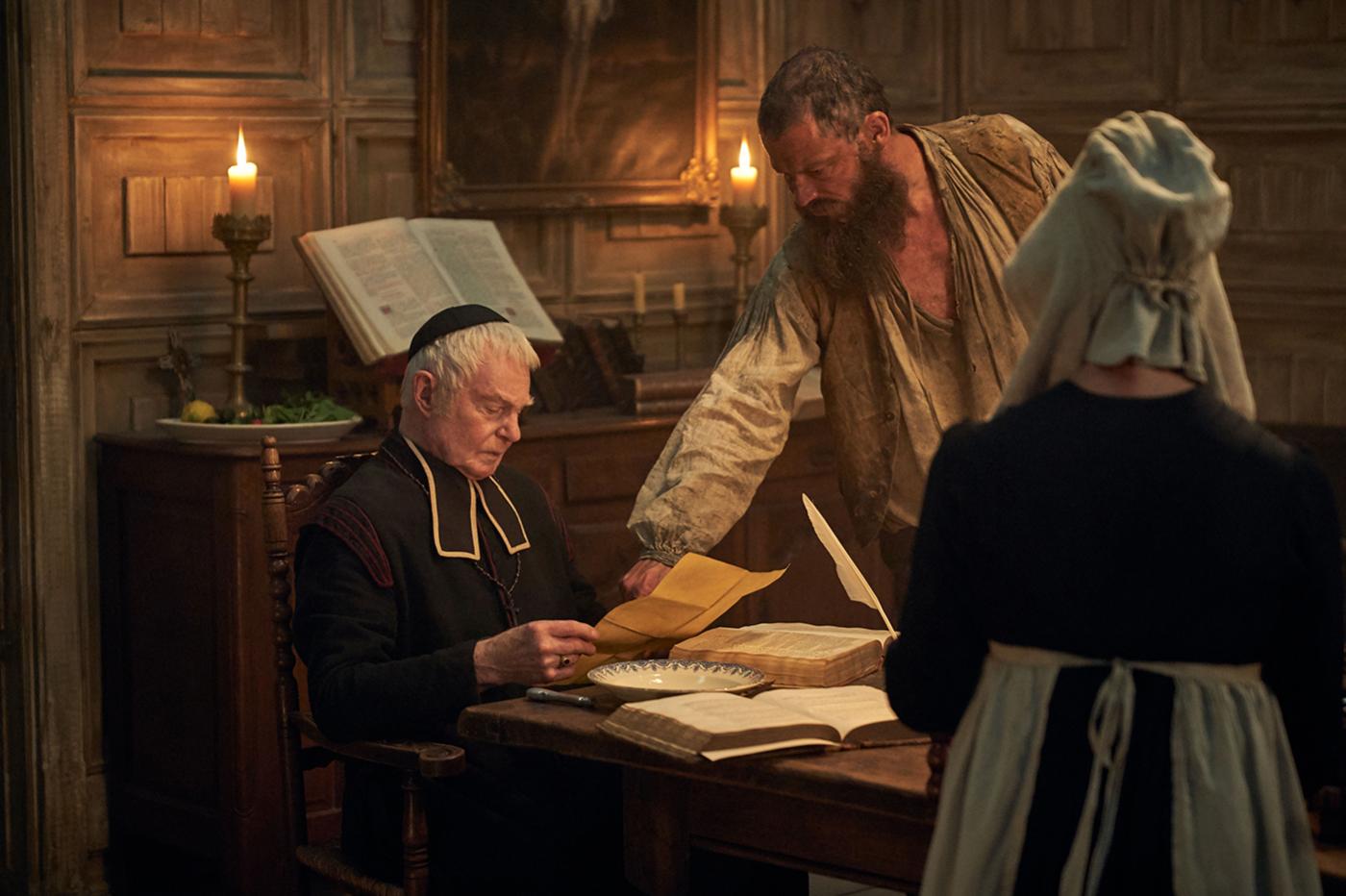 Jean Valjean's yellow passport marking him as an ex-convict makes everyone but the kindhearted Bishop Myriel avoid him. Photo: Robert Viglasky / Lookout Point

While Jean eats ravenously, Bishop Myriel angers him by discussing religion and forgiveness. “Don’t preach to me about God and love,” Jean snarls. Life has beaten him down; his heart is full of bitterness and hatred, and that will never go away.

Jean proves his point while the Bishop sleeps by stealing into the night with the Bishop’s silverware. While the Bishop’s maid is upset by the theft the next day, the Bishop is unconcerned. When Jean is brought back to the Bishop by soldiers who found him with the silver, the Bishop dismisses them and hands Jean the candlesticks to take, too. Use the proceeds from selling all the silver to become an honest man, he advises. “I have bought your soul…. You belong to God.”

Apparently he didn’t pay enough. On a road outside town, Jean comes across a carefree boy singing to himself and tossing a coin. When he drops the coin, Jean steps on it and scares the boy away. Then the pealing of church bells reminds Jean of the Bishop’s kindness and he regrets his cruelty – but the boy is long gone.

Fantine, Favourite, and Zéphine have enjoyed a full year of luxurious treatment by their wealthy beaux; Fantine’s year has been further enriched by her love for Félix. After an all-day outing capped by a drunken feast, the three men promise a surprise. They leave the room and are replaced by a servant with a letter: the men have been called back home, the year of merriment and lovemaking is over, they are at this very moment galloping away from Paris.

Fantine’s heaven has quickly become a hell. For she has a child – and now must support her daughter alone.