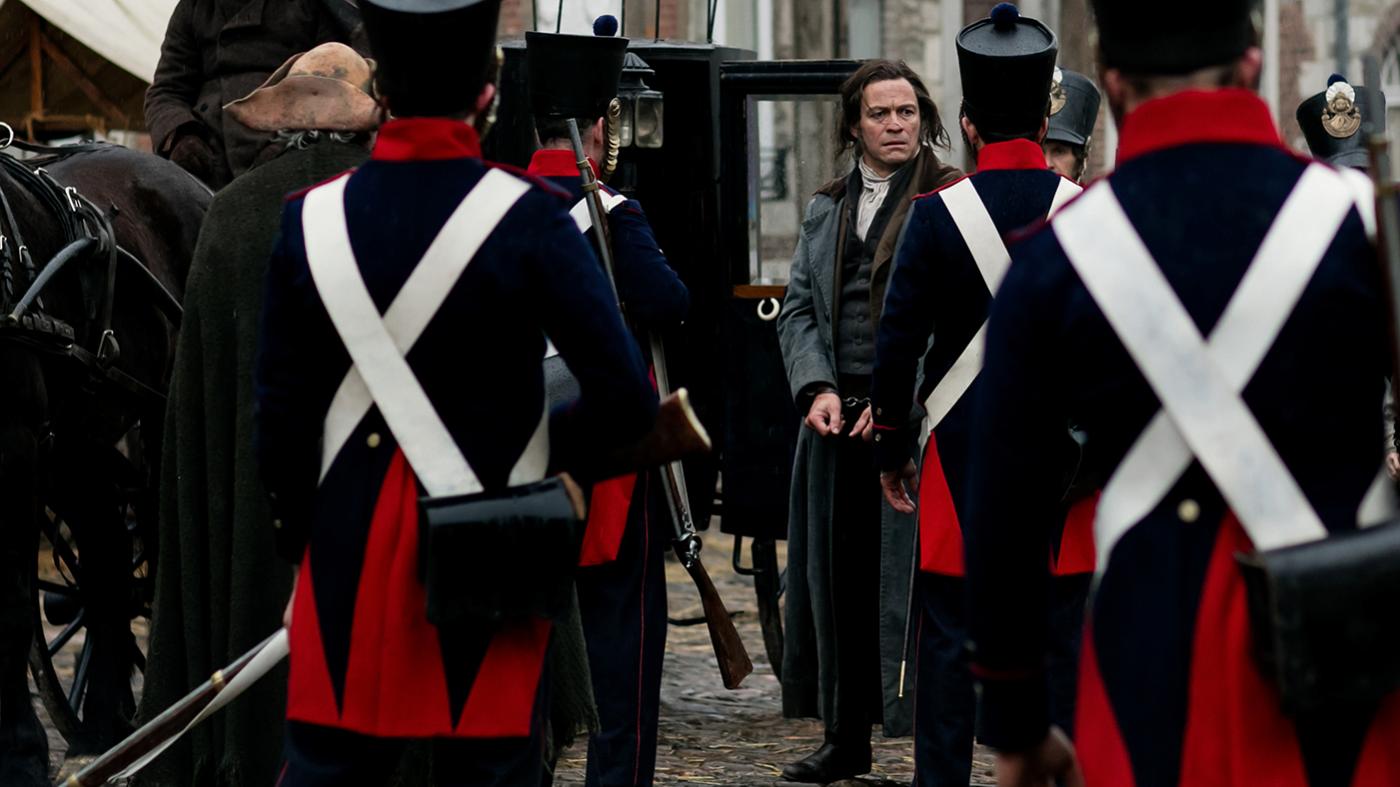 By trying to save another man from prison, Jean fails in his promise to help Fantine. Photo: Laurence Cendrowicz / Lookout Point

Jean Valjean is about to be sentenced to prison for life. Three of his fellow prisoners from Toulon have identified him, as has inspector Javert. The court laughs at him when he protests his innocence. But innocent he is – the real Jean is in the courthouse, not as the accused but as a spectator. Finally, he can take no more of the court’s jeering and the unlucky accused man’s fear. He confesses and hands over the coin he took from a boy six years ago, the trifle that precipitated all this. Javert triumphantly arrests him.

Brought back to Montreuil in handcuffs, Jean spies his factory overseer amongst the crowd gathered to see his ignominious trek to the jail. He calls out, asking if she brought Cosette to Fantine. Her embarrassed look says it all. He rushes at her, pushing aside guards to run into the infirmary where Fantine lies dying. The nun working there prevents Javert from arresting Jean right away, letting him have a moment with Fantine. As she pleads for her daughter, Javert bursts in and says that Jean is a criminal; he has not fetched Cosette. The suffering Fantine perishes right then.

Jean is devastated; he has failed to make amends. He promises over Fantine’s corpse that he will find Cosette and care for her. And then he is marched off by Javert, and sent back to the prison at Toulon. 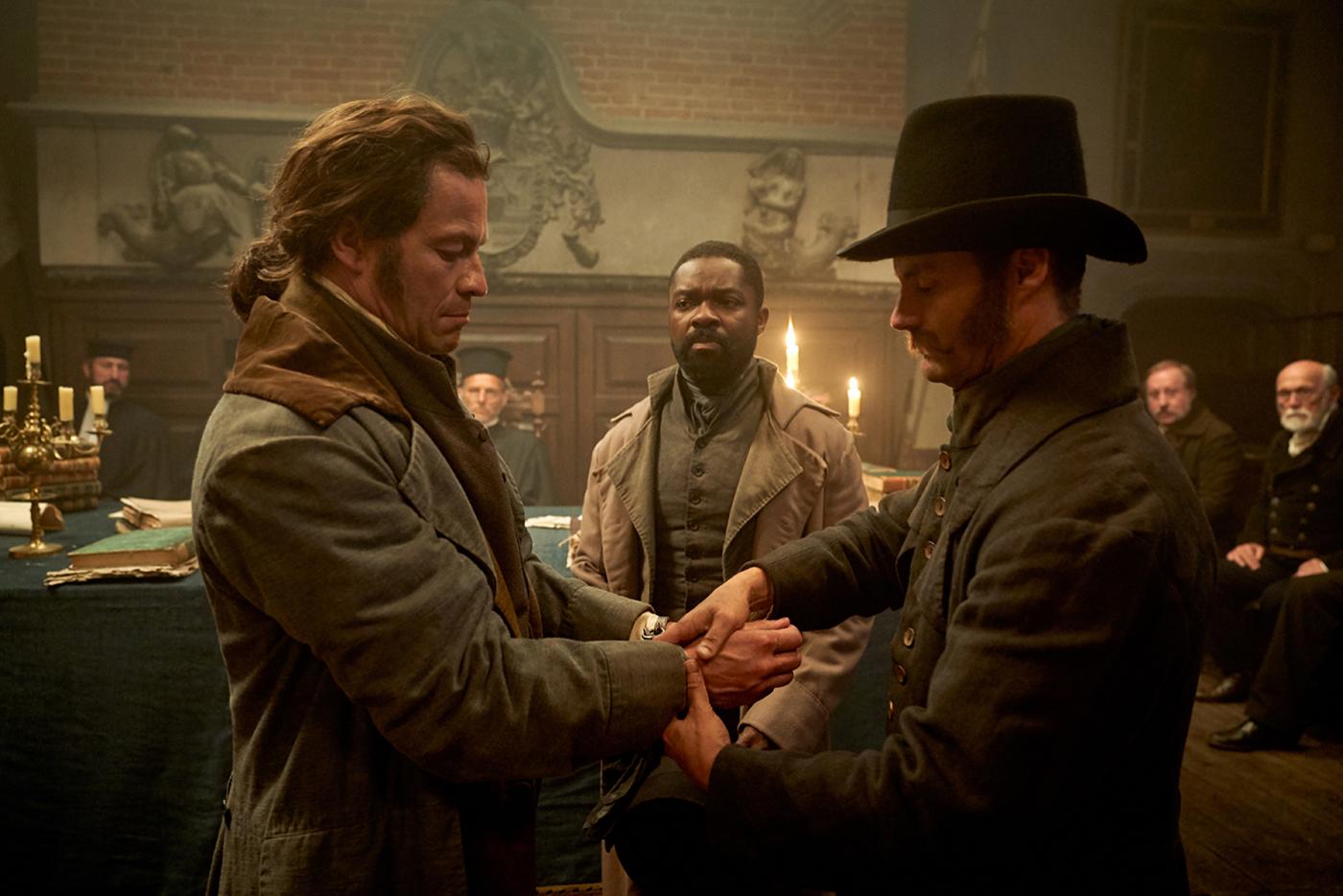 Care for Cosette is in short supply at the Thénardier inn. She is forced to do all the hard and dirty labor in the inn, and is called “toad” and whipped by the Madame. The inn’s guests cheer Madame on as she chases Cosette with a belt; the two Thénardier girls laugh while they play with their dolls.

While she is fetching water from the river in the snow on Christmas, Jean comes across her. It has been two years since he was arrested for the second time. He asks her name; hearing it, he offers to carry the buckets. At the inn, he requests room and board, paying the Thénardier’s exorbitant prices without a qualm. (He must have dug up the money and candlesticks he buried.) Watching Cosette sweep while the Thénardier girls play, he asks if she has a doll like the Thénardier girls. He pops outside and buys one, with real human hair, from the same man to whom Fantine sold her hair and teeth. He gives it to Cosette, pays the Thénardiers so that she doesn’t have to work that evening, and makes the Madame serve him instead.

The next morning, Madame Thénardier charges Jean even more than he has already paid and complains about how much Cosette costs them. So Jean offers to take the girl off the Thénardiers’ hands. Monsieur quickly appears to bargain – he is not above selling Cosette to Jean. Nor is he afraid to dmand more money after Jean has already paid them an enormous sum and departed with the girl. Thénardier runs after Jean, drawing a pistol on him when he refuses to pay more. Jean easily overpowers Thénardier, sends him running home, and throws the pistol into the bushes.

When Jean and Cosette arrive in Paris and settle into lodgings there, the young girl asks if Jean is her papa now. Only if you want me to be, he replies, and, after she confers with her doll, Cosette says yes – as long as you don’t beat us. 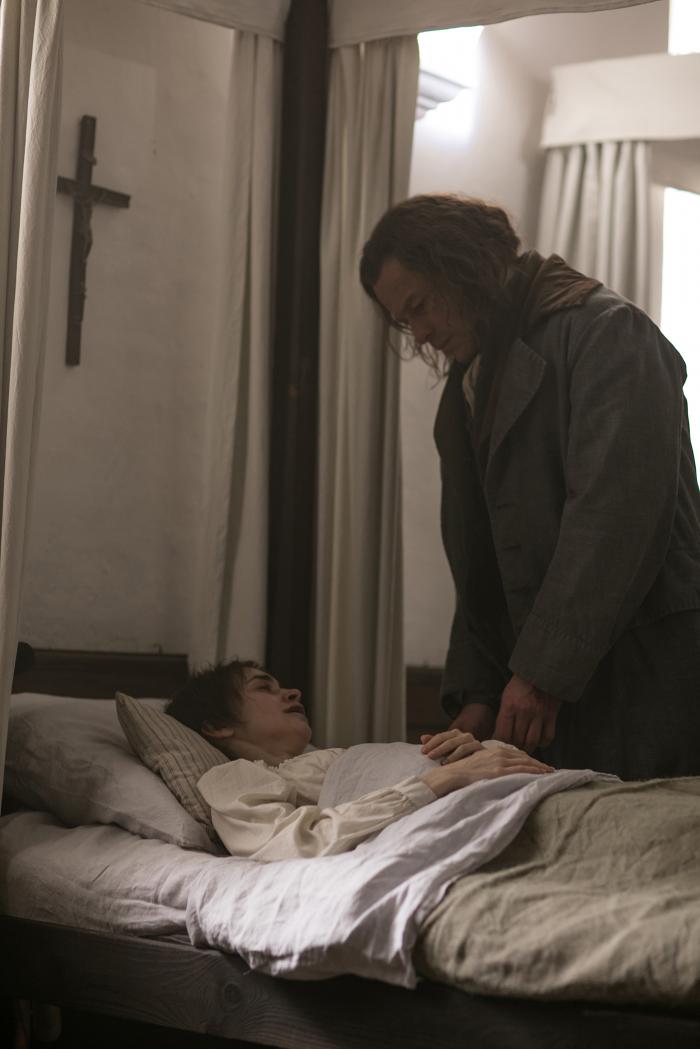 Jean eventually makes good on his promise at Fantine's deathbed. Photo: Laurence Cendrowicz / Lookout Point An idyllic life thus begins, as Jean teaches Cosette to read and the two jaunt about the city, claiming that Jean is Cosette’s grandfather. But, like all idylls, this one must end.

Javert is now a police inspector in Paris. When Thénardier reports that his stepdaughter was kidnapped, Javert recognizes the name of the town and decides to question Thénardier himself. He also sends a policeman to check with Toulon to see if any prisoners have recently escaped or died.

Javert grills Thénardier for details about Cosette. The innkeeper’s answers confirm Javert’s suspicion that Jean is responsible for the “kidnapping.” Javert also sees right through the Thénardiers: their neighbors told him that they were flush with cash after Cosette left, so Javert knows they sold her. He orders the Thénardiers’ inn seized. As the despicable innkeepers pack up a cart with what meager possessions they have left, Gavroche, their unloved son who has become the inn’s laborer after the departure of Cosette, runs up from behind the house – they had tried to leave him behind, along with their dog, saving themselves an extra mouth to feed.

When Javert returns to Paris, he learns that prisoner 24601 – Jean Valjean – did escape from Toulon, and drowned in the process – but a body was never found. Having learned from Thénardier that Jean and Cosette seemed to be heading to Paris, Javert plasters wanted posters for Jean all over the city.

Jean sees one of these and knows his time has come. A nosy fellow tenant reports him to Javert, who brings a squad of men to Jean’s door. When they break it down, no one is there, but the candles are still smoking. Javert sends his men to cordon off the neighborhood.

As the law closes in on him, Jean finds himself trapped with Cosette in a street next to a high stone wall. In desperation, he climbs it, using the rope suspending a streetlamp to pull Cosette up after him. On the other side of the wall is a convent. When Jean bursts into the chapel, he is immediately told to leave – no men are allowed. But one of the nuns recognizes him as Monsieur Madeleine – she was the sister who tended to Fantine as she died.

As the police pound on the door of the nuns’ complex, Jean admits that he is a convict and begs the sisters to take Cosette in, even if it means turning him away. The Mother Superior hesitates, then goes to the door – and refuses Javert. No men are allowed, she tells him, and there are none on the grounds.

She assures Jean that, even though he is a thief, she trusts him. Asking if he would part with Cosette so that she can stay safely at the convent, he says yes, though “it would break my heart.” She lets him stay on as a gardener, while Cosette can attend the convent school. They will be able to see each other every day.

Jean is relieved. He begins to settle into his chamber, unpacking the few possessions he grabbed before fleeing. He still has the Bishop’s candlesticks.