The Complicated History of One of Michigan Avenue's Most Unusual Buildings 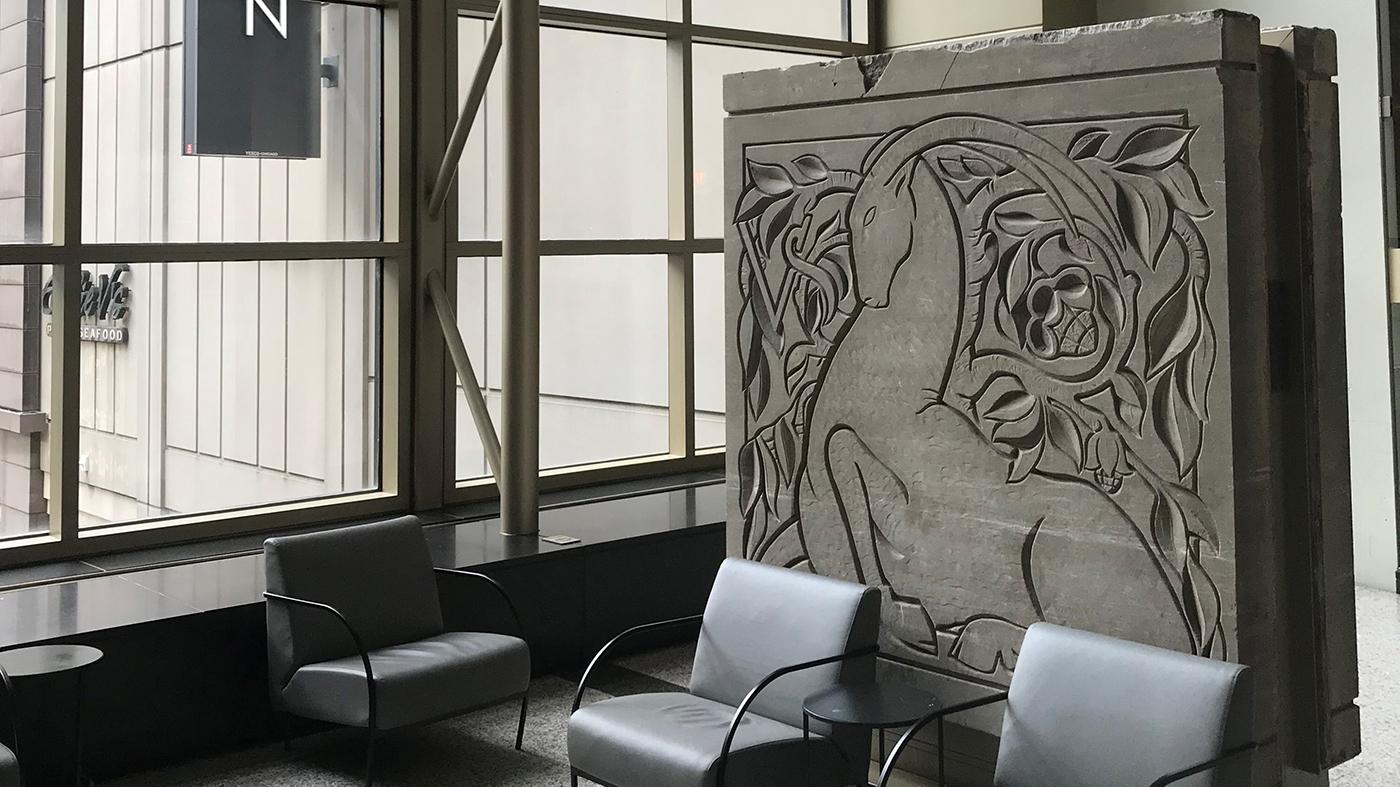 Unique "Greco-Deco" sculptural panels by the artists Gwen and Eugene Lux, like this one depicting Aries, are one of the main reasons the McGraw-Hill Building received landmark status and underwent a "facade-ectomy"

There is an odd assortment of buildings along the Magnificent Mile that might confuse a pedestrian who stops to consider them. Where Grand Avenue crosses underneath Michigan Avenue, it suddenly disappears: you can look down at Grand on the east side of Michigan, but there’s a glassy pavilion with a Nordstrom sign on the other side where the street should be. Someone entering that pavilion will find that they’re not in a Nordstrom, despite the sign, but a long mall that immediately curves to the left, into the elegant Art Deco tower next to the glassy atrium – not that you can tell you’ve entered another building once you’re inside. After walking for a ways along the upward-sloping mall, past various stores, the passerby eventually – finally – comes to the advertised Nordstrom – but not before they cross over Rush Street through a pedestrian bridge and pass by four monumental stone Art Deco carvings. Somehow they’ve ended up in a third building, a block away from where they started, having crossed over two streets without ever going outside.

What’s with this strange configuration? It’s the result of confident problem-solving and a clash between preservation and development, an example of the creativity required to build in a dense city where commercial preferences, architectural realities, developers’ desires, and the public’s opinion can all collide. 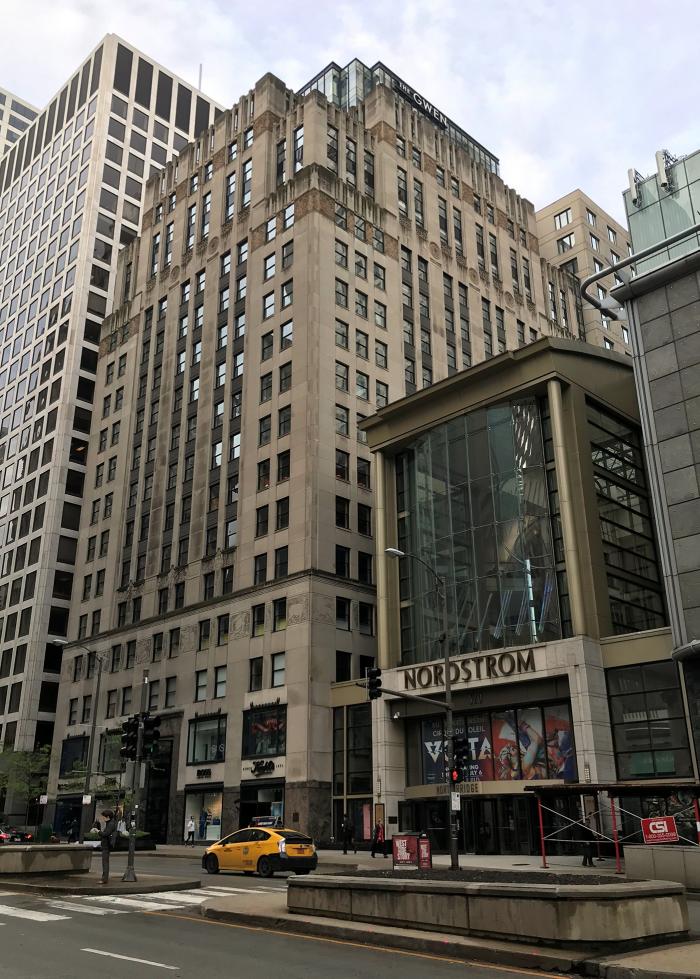 In order to carry out plans for a mall leading to a Nordstrom's a block away without razing the McGraw-Hill Building, the developer kept the facade but built a new structure on which to hang it Even though the McGraw-Hill Building at 520 N. Michigan was built in 1929, its insides – the mall that passes through it, the hotel above that – are much newer. Envisioning a new Michigan Avenue mall, the Buck Company bought the building, which was designed by the architects Frederick Thielbar and John Fugard, who also worked on the eye-catching Jewelers Building that stands off the River at Wacker Drive and Wabash Avenue. The developer’s original plan called for the demolition of the McGraw-Hill Building to make way for a new structure that would act as a gateway to the new Nordstrom store on the block behind it. But the city stymied that scheme in 1997 by granting landmark status to the McGraw-Hill Building, which the Commission on Chicago Landmarks described as “one of the city’s best collaborations of sculpture and architecture,” while the Chicago Tribune editorialized against it as an “inoffensive but drab example of late ‘20s Art Deco style.”

So Buck reluctantly modified his plan. Instead of being torn down, the McGraw-Hill Building would undergo a “façade-ectomy,” an oft-derided process in which a historical façade is maintained while a new structure is built behind it. Buck’s proposed mall would still run from Michigan over Rush to the new Nordstrom behind it; now it would just run through the McGraw-Hill Building rather than over its demolished memory.

A façade-ectomy technically meets the requirements of preservation – landmark status usually covers only the façade of a building – but critics say it can result in a grotesque Frankenstein building that is no longer truly historic. Take 10 S. LaSalle Street in Chicago, which jarringly transitions from an old, ornate four-story façade into a modern blue glass tower, or the Boston Stock Exchange, which plopped a mirror-glass tower behind three walls of an 1890s façade. Such preservation-plus-new construction can also be complicated and expensive. The architectural consultant who oversaw the McGraw-Hill project told the Tribune midway through the process that, “this is something that should never be repeated. If someone else wants to do something like this again, have them call me and I’ll talk them out of it.” No one had ever attempted a façade-ectomy on such a tall building – the McGraw-Hill is 17 stories – and just the façade cost around $10 million.

But the elegant façade was worth saving. Dating from the same decade as the Wrigley Building a block to the south, it is the only remaining Art Deco building on Michigan Avenue besides the Palmolive Building, and it displays the strong vertical lines and setbacks characteristic of that style. Its most noteworthy feature is a series of stylish sculptural panels around the fourth floor depicting the Zodiac, as well as three panels of Greek deities – Diana, Atlas, and Helios – above the main entrance. 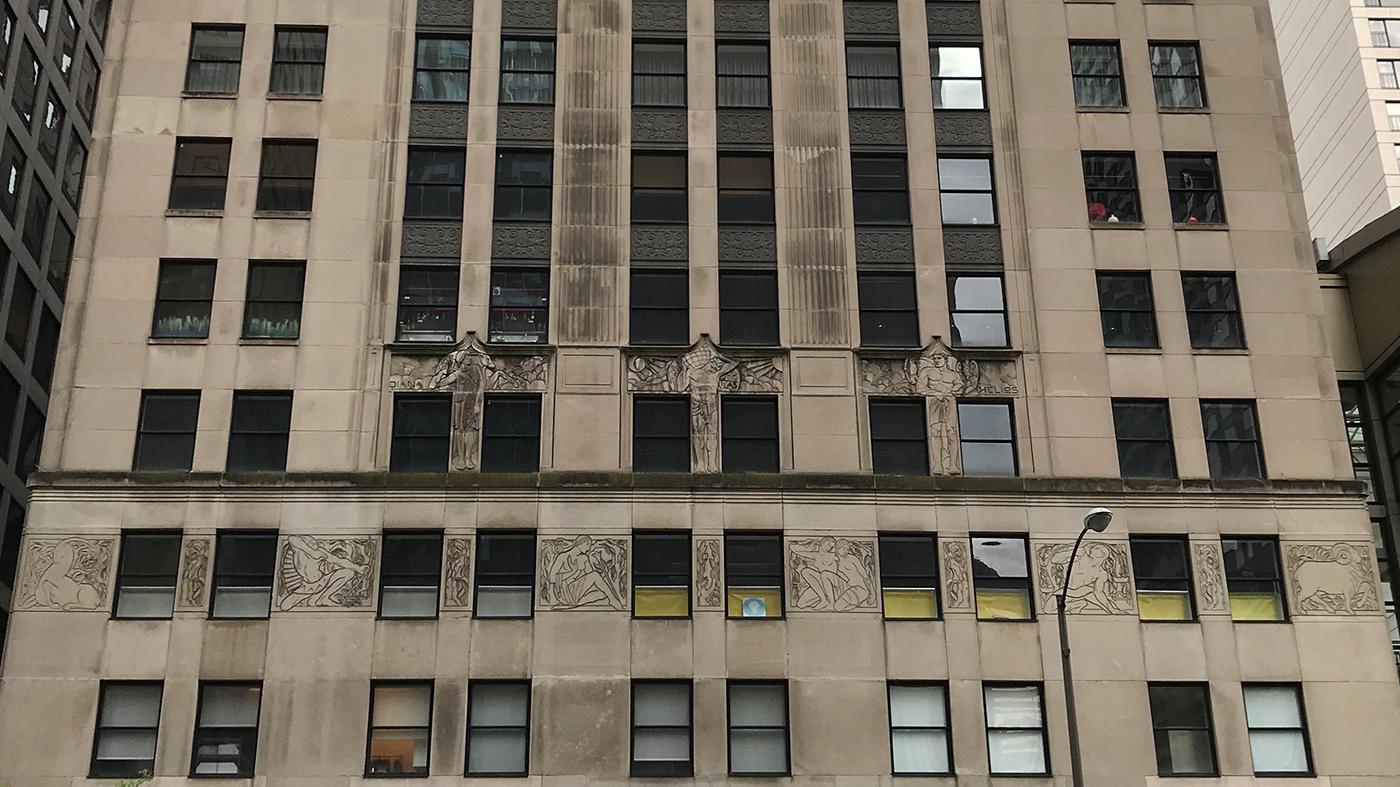 The Lux panels depict three Greek deities – Diana, Atlas, and Helios – as well as the signs of the Zodiac

The sleek sculptures are Jazz Age interpretations of classicism, a fusion that has been called “Greco-Deco.” They were created by the husband-and-wife sculpture team of Eugene and Gwen Lux. Gwen, who was born in Chicago but studied in Detroit, was only 20 when she worked on the commission. Promotional materials for the building noted only Eugene as the sculptor, even though Gwen probably did more of the work – it was extremely rare for women artists to receive such commissions. But within a couple decades, Eugene had given up sculpting and faded into history, while Gwen achieved some success as an artist, exhibiting in Paris with Piet Mondrian and Robert and Sonia Delaunay at their request and creating works for New York’s Radio City Music Hall and Eero Saarinen’s General Motors Technical Center in Detroit. (The couple divorced in 1942.)

To save the fashionable Lux panels and the rest of the façade, then, some four thousand slabs of Indiana limestone – from the same Bedford, Indiana that provided the stone used for the Empire State Building, Tribune Tower, and various Washington, D.C., landmarks – had to be removed from the building. Workers took off the roof and cut through interior walls until they reached the back side of the limestone façade, then removed the exterior stones one by one with a nylon sling and crane. After being lowered to street level, the stones were then taken to a warehouse on the Southwest Side. 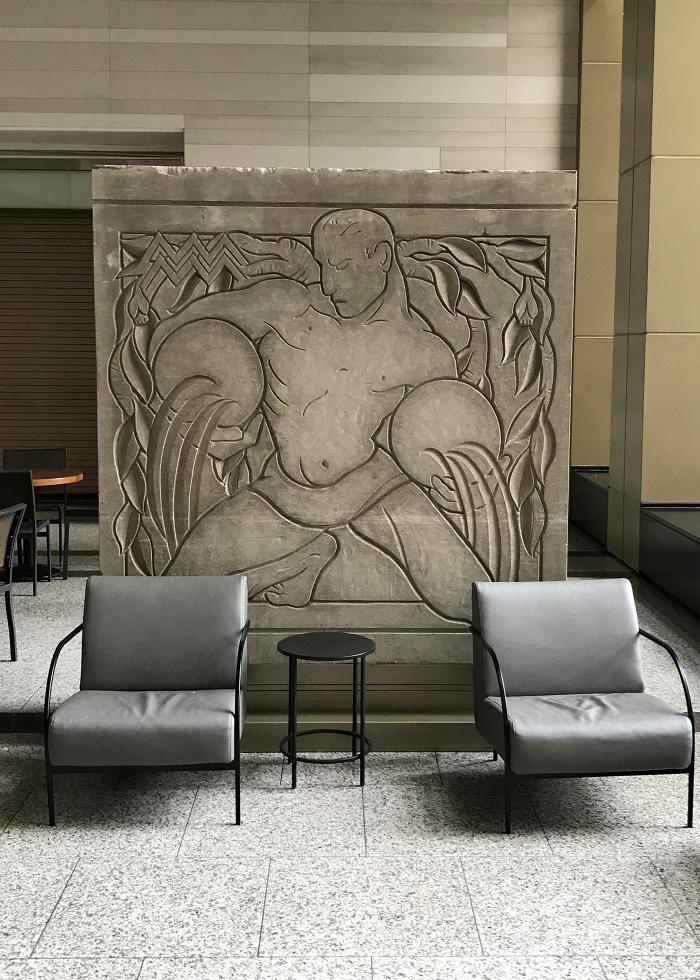 Four of the panels, including this one of Aquarius, can be seen in the pedestrian bridge over Rush Street in the Shops at North Bridge “No previous experience with landmarks quite prepares a visitor for the sight of an entire building on wood pallets, stretching horizontally rather than vertically, farther than the eye can see, over more than two acres of floor space,” wrote a reporter for the New York Times about the warehouse. “The dismantling and re-erection of a designated landmark is… an appropriately brazen Chicago tale,” he continued.

At the warehouse, each piece of stone was assessed and cleaned. Around half of the pieces, having chipped or cracked over the decades as the building’s original concrete frame shifted and settled, were repaired with epoxy or stainless steel. They were then brought back to Michigan Avenue and re-installed on a new steel frame, hanging in front of the structure in a manner similar to glass curtain walls on modern buildings.

A glass entry pavilion – the one emblazoned with “Nordstrom” – was added next door to the McGraw-Hill building, above Grand Avenue, as was a pedestrian bridge over Rush Street to the Nordstrom. The entire North Bridge complex opened in late 2000, another step in the transformation of River North into a shining urban shopping, dining, and residential center.

Meanwhile, Gwen Lux’s name lives on in uber-commercialized fashion, in the hotel that resides in the building she adorned with her sculptures 90 years ago. After two name changes, the hotel became the Gwen in 2015, and features an extravagant Gwen Lux Suite on a top floor that offers a $5,500 “urban glamping experience” on the balcony. But a truer memorial of her legacy can be found inside the building, in the pedestrian bridge over Rush Street. There you can see four of her original panels for the McGraw-Hill Building up close, a chic and self-assured testament to her.