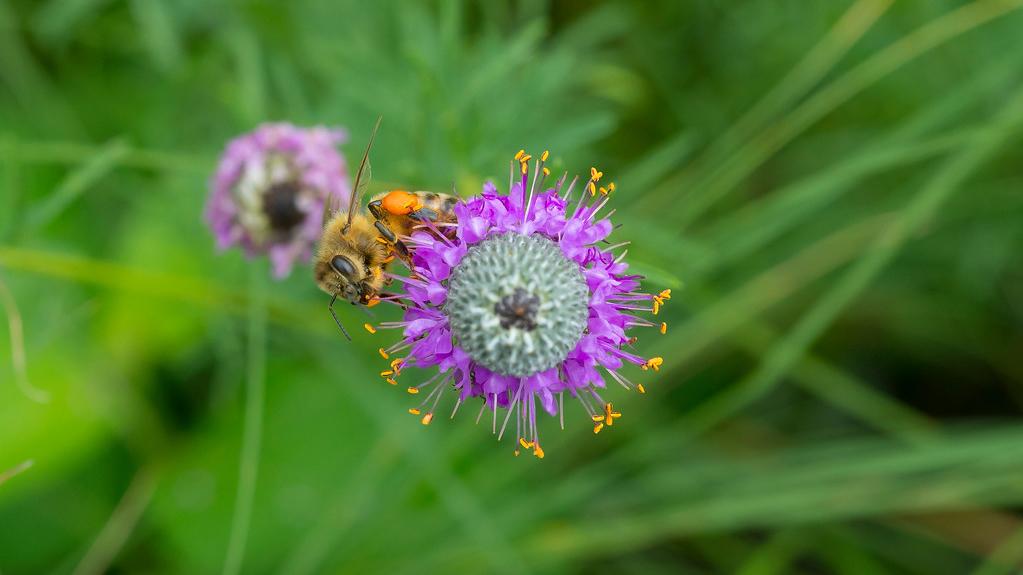 The rusty patched bumble bee was once found in 28 states in the Midwest and Northeast, but its population has declined to the point where it has only been reported in thirteen states since 2000. It is the first bumble bee to be listed by the U.S. Fish and Wildlife Service as endangered. And yet, vestiges of the population tend to be found in a surprising place, according to Louise Clemency, the field supervisor for the Chicago Field Office of the United States Fish and Wildlife Service. “It seems to be hanging on best in our metropolitan areas: the suburbs of Chicago, Rockford, Madison, Minneapolis,” she says. “And that’s pretty exciting in what it tells us about the importance of our backyard gardens in helping to protect an endangered species like the rusty patched bumble bee.”

Clemency is one of several experts speaking at “Pollinators Need You!,” a Janet Meakin Poor Research Symposium hosted by the Chicago Botanic Garden on Saturday, June 22. The symposium is part of the Garden’s summer-long Bees & Beyond, which includes pollinator-themed display gardens, rusty patched bumble bee topiaries, an interactive educational exhibition about pollinators, a butterfly exhibition, and more, designed to help visitors understand the importance of pollinators and the threats that face them. For, as Clemency points out in the case of the rusty patched bumble bee, the gardens and yards that people plant can be just as important in pollinator conservation as larger-scale efforts.

“A lot of folks might be surprised to learn that, in comparative studies, cities have greater bee abundance and diversity than rural areas,” says Rebecca Tonietto, an assistant professor of biology at the University of Michigan-Flint and another speaker in the symposium. “A lot of things that bees need are actually things that people love to see, like flower gardens where something is blooming all the time, May through October. People like different things to look at, so cities often have a broad diversity of flowers, which is beneficial to pollinators. Imagine an apple orchard: the trees all come into flower at the same time – and then they’re done. In cities, unlike in agricultural settings, we don’t have big tillers that come through the parks all the time. We aren’t applying broad-spectrum pesticides to plants all the time.” 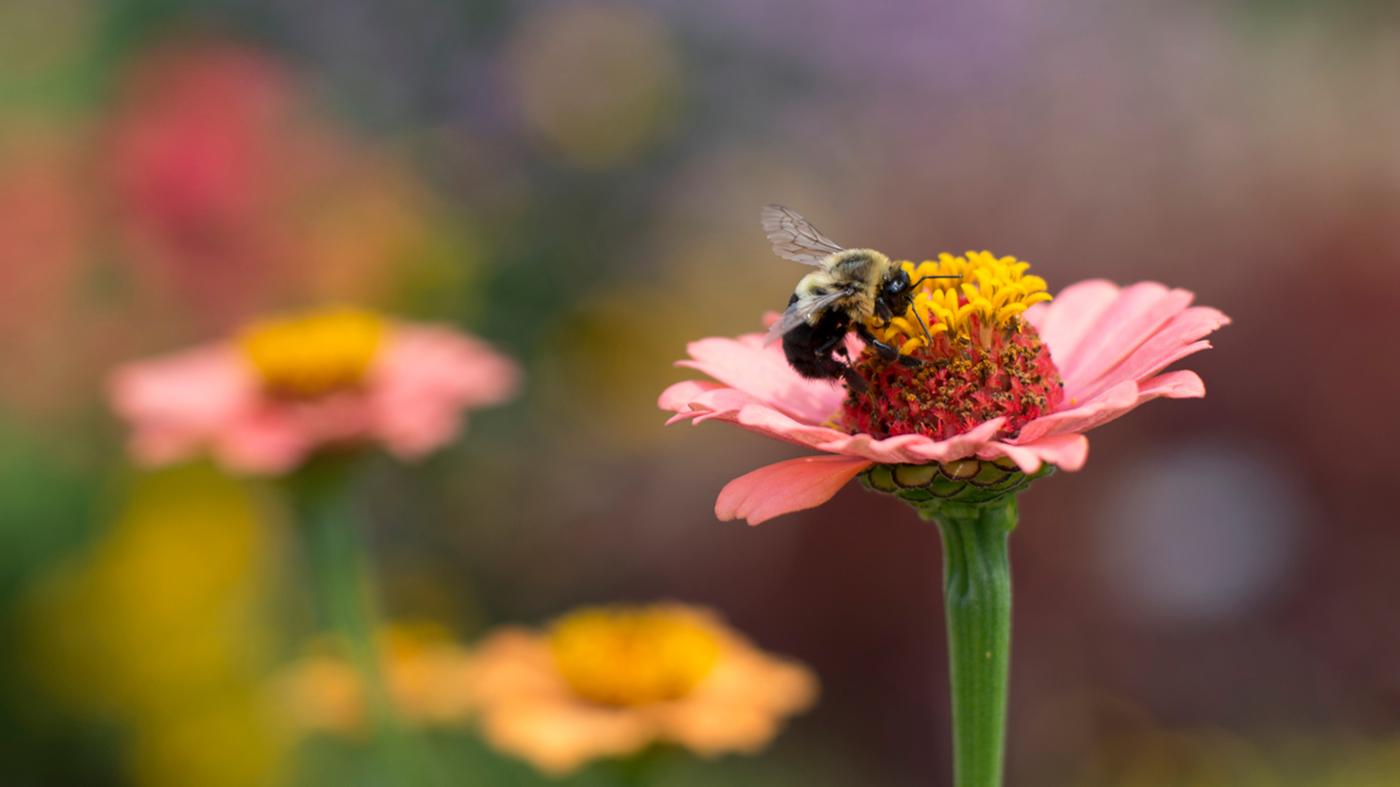 “A lot of folks might be surprised to learn that, in comparative studies, cities have greater bee abundance and diversity than rural areas,” says Rebecca Tonietto, who researches urban bee populations. Photo: Courtesy Chicago Botanic Garden

Furthermore, despite the built environment that encroaches upon nature in urban areas, many cities have green space beneficial to pollinators in parks, boulevards, and even on the roofs of buildings – and cities like Chicago are focusing on incorporating native plants necessary for the thriving of pollinators into those spaces. “Historically, a lot of cities, especially pre-auto, were designed so that there was a park that people could walk to within any neighborhood, which means that they are all within flight range for a bee,” Tonietto says.

“The Chicago Park District has done such a great job all over the city of creating pollinator gardens,” Clemency says. “Beyond that, the prairie restoration on forest preserve land in different counties, the native landscaping that people do in their backyards, and the several corporate campuses that have converted some of their mowed lawn into native wildflower gardens or prairies: those efforts are going to be a huge help to pollinators.”

The reason we have to focus on pollinator conservation in the first place is because many pollinators, especially bees and butterflies, face serious threats in our world today. “Some of the evidence that’s out there suggests that there are species that are going extinct: not in the blink of an eye, but they’re certainly being put under a lot of stress,” says Paul J. CaraDonna, a speaker in the symposium and a research scientist at the Chicago Botanic Garden who focuses especially on the relationships between plants and pollinators.

Like many other species, pollinator populations suffer from habitat loss resulting from development, agriculture, and climate change, as well as the encroachment of invasive species and the stress of changing weather patterns caused by global warming. They are also vulnerable to pesticides and herbicides, as CaraDonna points out. “In the same way that you wouldn’t want to feed your kids cereal with poison in it,” he says, “you also wouldn’t want to be spraying all your flowers with insect repellent, which the bees then collect and eat and feed to their babies.” (Clemency advises gardeners to buy flowers have not been treated with systemic insecticides, which stay in the plant and can affect visiting pollinators.) 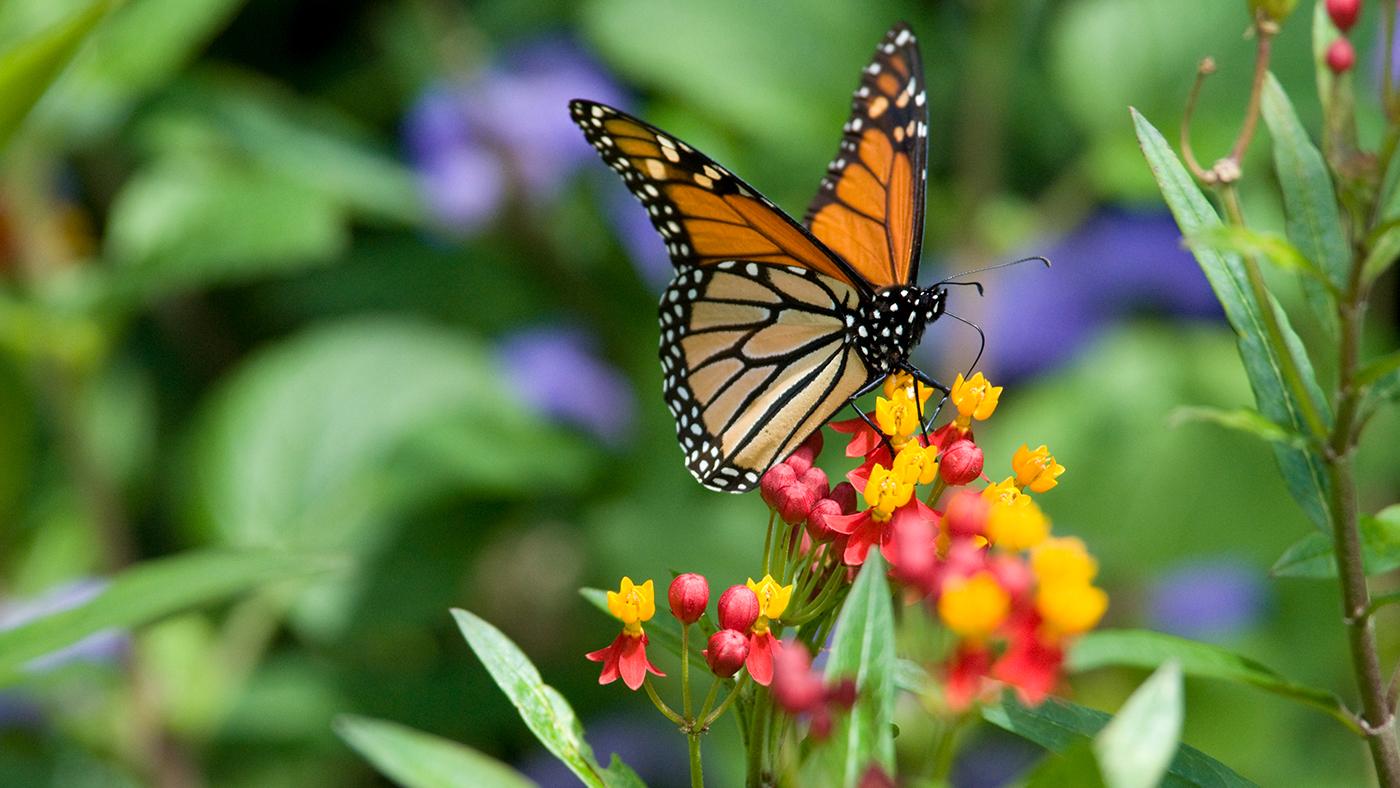 The 4,000 species of bees native to North America – “We have native bees that are bright metallic green, and some are metallic blue, and some are so tiny you can barely even see them,” Tonietto enthuses – are also threatened by pathogens that may have been introduced by captive bee populations. “As greenhouse agriculture has increased, captive bumblebees are more frequently used to pollinate crops in greenhouses, and there’s speculation that they may have introduced novel pathogens to our wild populations,” Clemency explains.

Whereas such captive populations or “managed species” like honeybees, which are not native to North America, have humans to care for them, wild populations do not. “With honeybee declines, I tend to think of it more as a management issue, because we can take care of them,” CaraDonna says. “For our native bees and our wild bees, they face many of the same challenges, but they’re not managed by humans, and we don’t know nearly as much about them.

“There are all sorts of built-in mechanisms that allow all kinds of organisms, including pollinators, to roll with some punches,” he continues. “But with climate change and habitat destruction and other threats, we’re throwing a whole lot of change at them at once. If we’re not paying attention and we’re not doing things to mitigate the challenges and stresses that these species face, we might find ourselves in a really sticky situation, where species could go extinct and pollinator services could start to really decrease. Once that happens, we’re in really big trouble.” 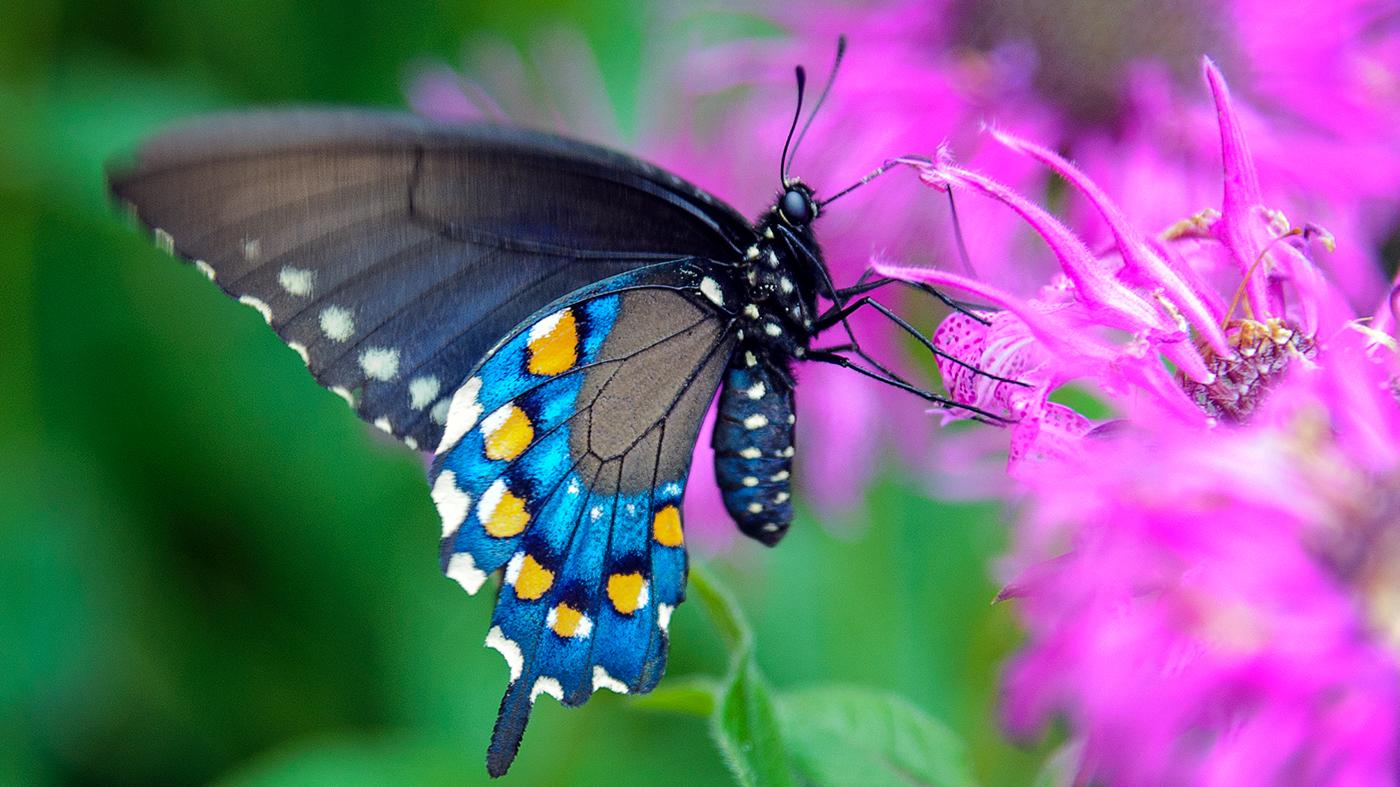 Why are pollinators so important? “Pollinators have a very special role that they play,” Tonietto explains. “They’re what helps flowers reproduce, they’re what brings us our fruit and even some vegetables. There’s a frequently cited statistic that one in every three bites of food is brought to us by an animal pollinator. So if you enjoy apples or cherries or pumpkins or watermelons, you have a bee to thank for it.” CaraDonna says that “most of our vitamins – most of what we think of as delicious food – comes from animal-pollinated plants. From an economic perspective and an ecosystem perspective, pollinators are invaluable. They’re vital for the proper functioning of our natural and our agricultural ecosystems.”

Those ecosystems are complicated systems that rely on many interdependent parts, from flora to fauna. “These individual relationships are all part of this intricate balance in our community’s ecology,” Tonietto says. “You aren’t sure which is the important linchpin, and the concern is that, if one is gone, the whole thing might just fall apart.”