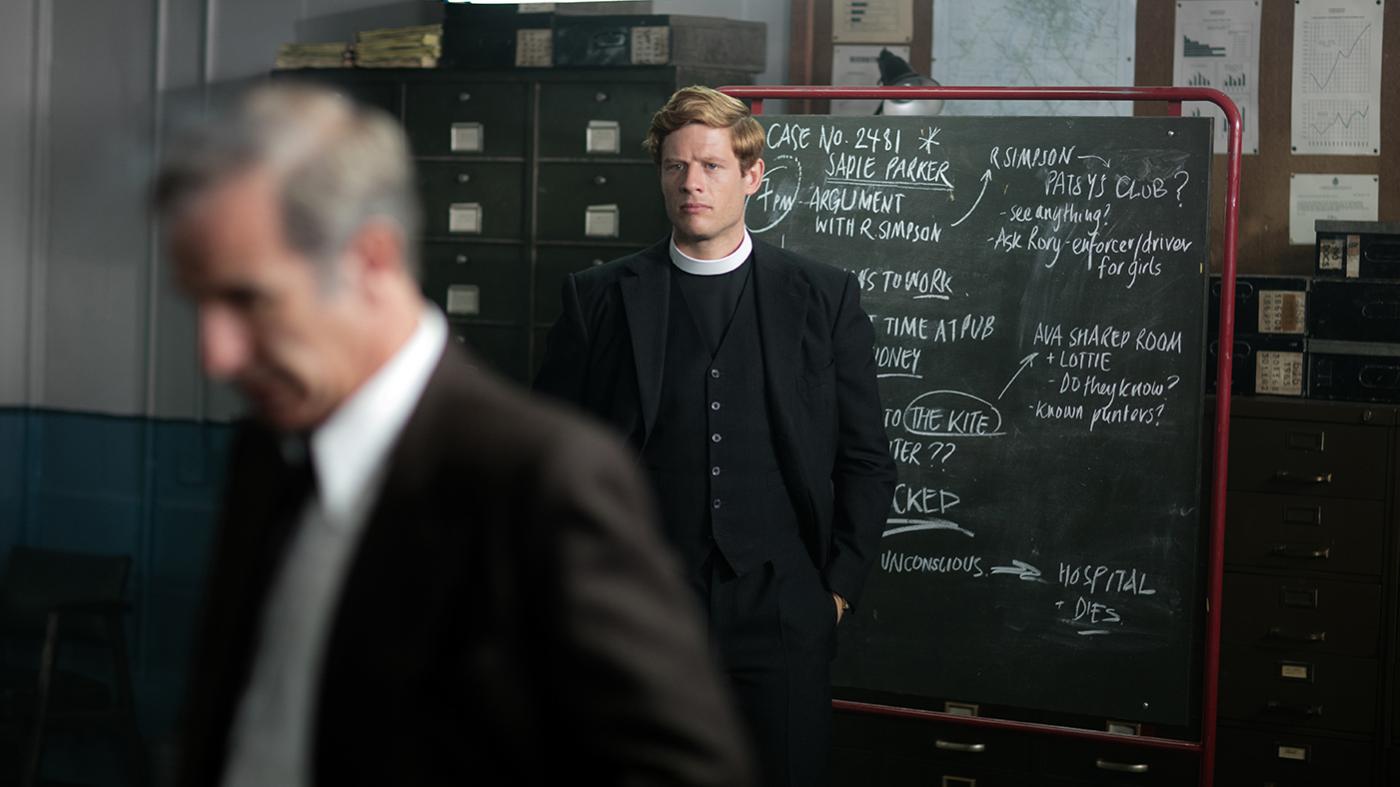 Sidney is troubled when a woman is murdered the same night he meets her, and he was too drunk to remember much about her. Photo: Kudos and MASTERPIECE

Grantchester airs Sundays at 8:00 pm and is available to stream. Read our recaps of the previous part of this episode and the following episode.

Sidney is suffering. In the wake of choosing the priesthood over Amanda and now being separated from another woman he was beginning to love, he has sunk into existential despair and bouts of excessive drinking. Leonard and Mrs. Chapman are worried that this is worse than one of Sidney’s usual downturns, and send Geordie to speak with him – unsuccessfully, since Geordie is sure Sidney will cheer up again soon.

Sidney’s latest night of drinking was worse than usual. When an assaulted woman with an odd puncture wound on her neck asks for him by name in the hospital just before dying, he doesn’t know why. He remembers getting a light from her the previous night but was so drunk he can’t remember anything else.

The woman, Sadie Parker, was found in the Kite, a rough part of town, her body simply dumped in the street outside the slum house where she lived with several other women. None of them admit to seeing anything, and they claim they, and Sadie, are seamstresses. Geordie quickly realizes that they’re prostitutes, a hunch confirmed when he finds Sidney’s jacket in Sadie’s room (Sidney gave it to her to warm her up), a book of matches from a seedy club in the pocket.

The women are in thrall to one man, Rupert Simpson, who owns both their residences and the club – he’s their landlord and employer. When Geordie and Sidney go to speak with him, he is golfing with his friend, a councilor named Archer Davis, who dismisses the cops even when Sidney loses his temper at Simpson for keeping the women in such dismal lives.

Sidney’s mood is lightened when he runs into Violet Todd. She’s staying in England until her brother Charles’s death certificate comes through. Sidney takes her on a lovely afternoon excursion, rowing her down the river, while she begins to help him out of his funk by telling him he’s wallowing. He couldn’t help Sadie, but he can still help the other women, she tells him. 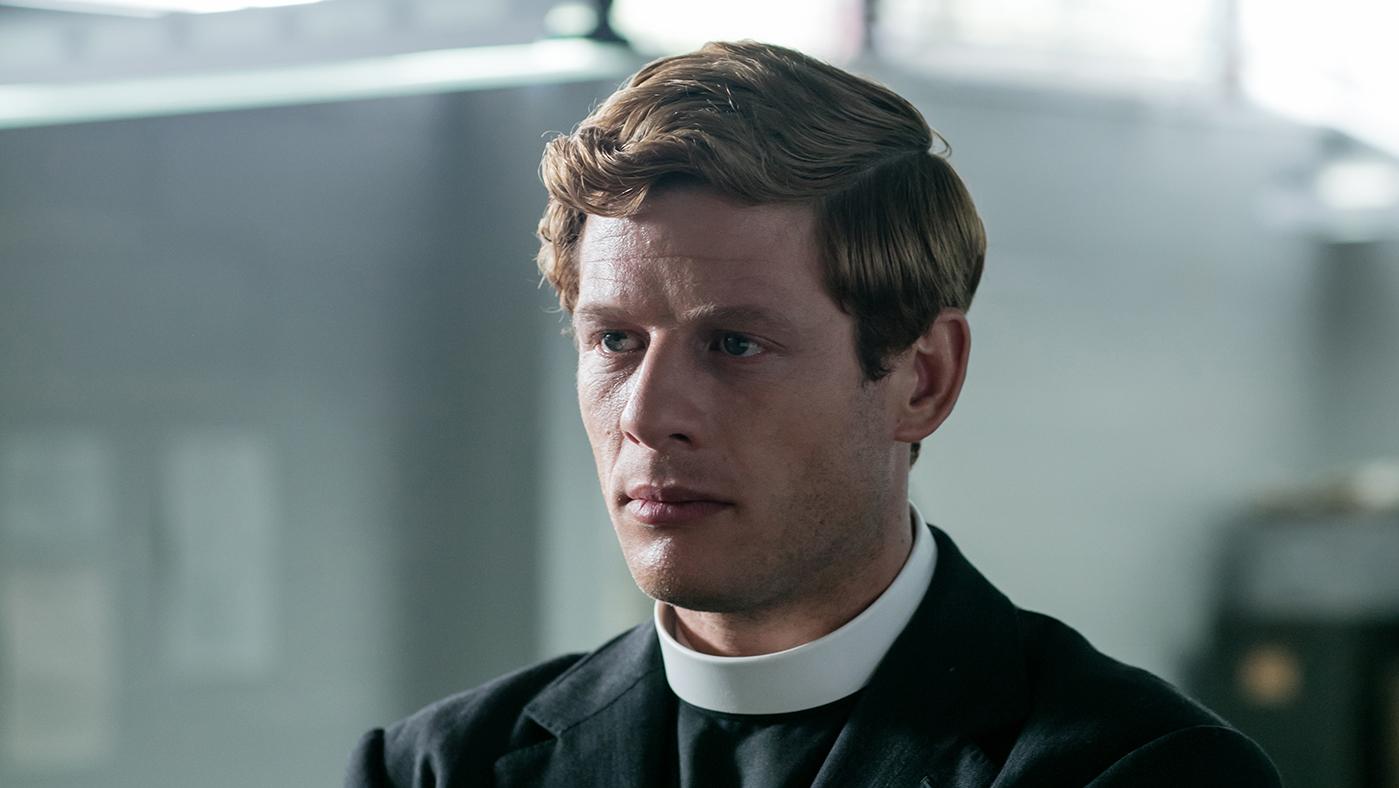 Sidney is sunk in an existential depression, unsure of where his life should lead. Photo: Kudos and MASTERPIECE

The women are stuck in a rough situation. Geordie stakes out their slum and watches an enforcer, Rory Dale, load them into a van to bring them to Simpson’s club. They act as “hostesses” there, catering even to some policemen from Geordie’s precinct, who drink for free. Neither the women nor Dale will talk to Geordie or admit they’re prostitutes. So Geordie closes the club and searches it, finding an account book with regular payments from Simpson marked. He must not be the true owner; why else would he be paying?

Simpson insists the payments are just a bar tab, but he does admit he was with Sadie the night she died. They were fooling around in his office when suddenly she lost her temper after he went to call her a cab. Sidney realizes why: there are photos of Simpson and his friend Davis on the wall with a variety of women, all of whom are wearing the same necklace, one that Sidney now remembers Sadie wearing. She thought she was special; the photos made her realize she was just another paid girl to Simpson.

Violet and Sidney return to the slum to help the other women and find a pile of furniture burning outside and screams issuing from the windows. Rory Dale is there, breaking doors and threatening the women, asking who talked to the police. Sidney fights Dale off a woman but is overwhelmed until Violet smacks Dale with a piece of wood. Dale stumbles away.

As Sidney cleans up and replaces the door Dale tore off, Violet bonds with the women. She tries to inspire them to protest their conditions, especially since their slum is being sold out from them. But Sadie spoke out, they say, and look what happened to her.

Not only is the slum being sold – it’s being sold to the council, as represented by Archer Davis. But when Geordie – who suspects Davis is the true boss of Simpson and is trying to make even more money from the slums by selling them to the city – tries to pin crimes on Davis, Rory Dale comes to the police and confesses that he’s behind everything: the prostitution and the murder. But it’s clear he’s covering for Simpson and Davis. 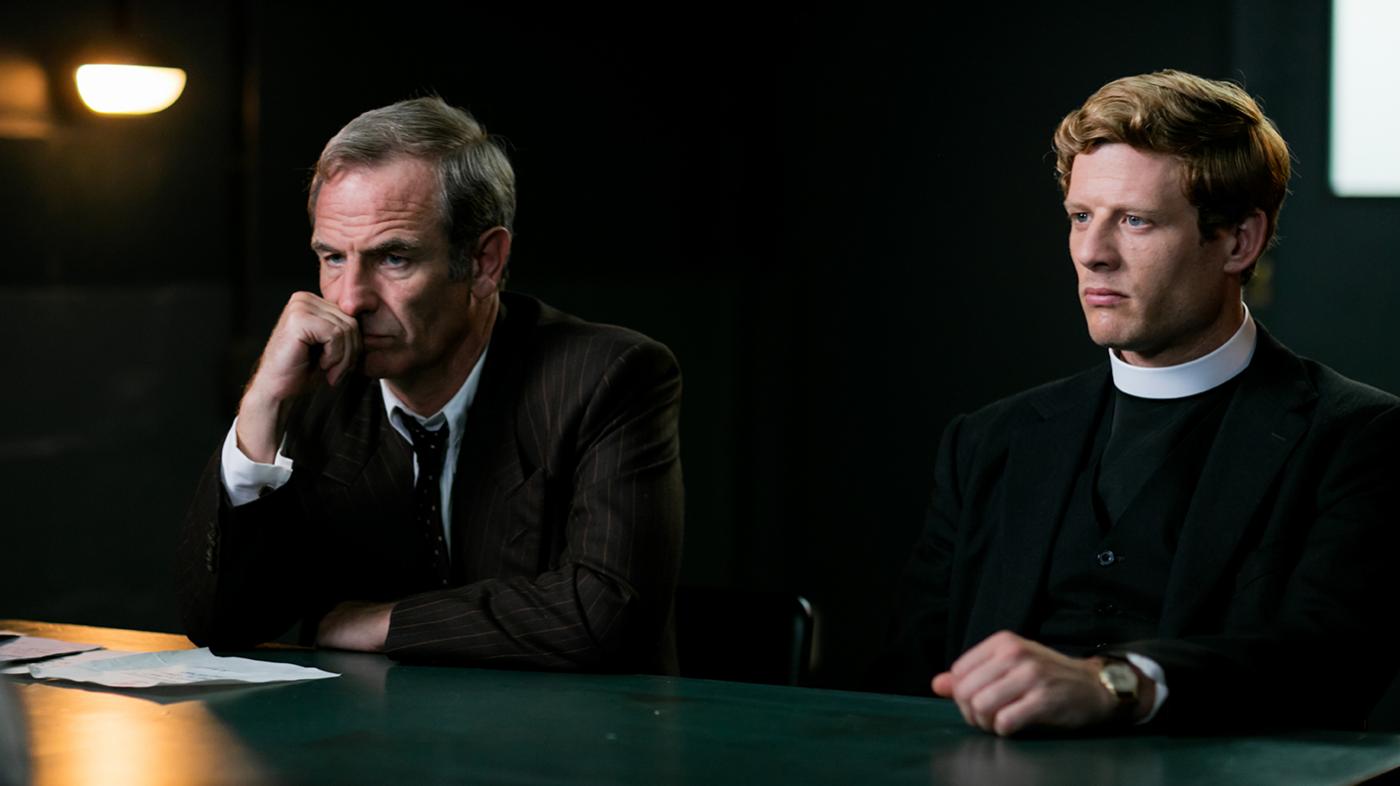 Geordie believes Sidney's despair will pass as usual, but when his friend makes a drastic decision he understands that Sidney needs a change.Photo: Kudos and MASTERPIECE

Meanwhile, Sidney asks Violet to stay in England with him; he loves her. But she refuses; she has important civil rights work to do back in the States. One of the women from the slum sees the despondent Sidney in the wake of this conversation and tries to cheer him by telling him that Sadie told all the women about him. He gave her hope in a hopeless life. The woman then tries to kiss Sidney, but he turns away. She grasps his hand before he leaves, her ring cutting into his hand. And that’s how Sidney solves the murder.

The mark left by the woman’s ring matches that on Sadie’s neck. Sadie told all the women about the photos in Simpson’s office, how he and Davis gave all the women the same gifts. She wanted to speak out against them, try to get a better life. But the woman who killed Sadie couldn’t imagine a way out; Davis and Simpson seemed like her best option, and she didn’t want Sadie rocking the boat and ruining things. So she strangled her, afraid that Davis and Simpson would retaliate against all the women if one protested.

The other women are also afraid of speaking out, but Sidney tells them that the cruelty will continue until someone stands up against it. Finally, they decide to testify against Davis, showing the cigarette burns he gives them. The careful councilor can now be charged and arrested as the leader of a prostitution ring.

Inspired by the change he helped enact in the women’s lives, Sidney makes a rash decision. He’ll go with Violet back to the States and work with her for civil rights, no matter the anti-miscegenation laws. He loves Violet, and she loves him. He’s never felt more hopeful and confident in the future and his purpose.

Mrs. Chapman and Leonard try to talk Sidney out of it, again sending in Geordie to convince Sidney. But Geordie knows his friend’s mind is made up. After being moved to tears by a parting gift from Sidney of a needlepoint reading “Abhor what is evil, hold fast to what is good,” Geordie plays one last game of backgammon with his friend over a pint of beer.