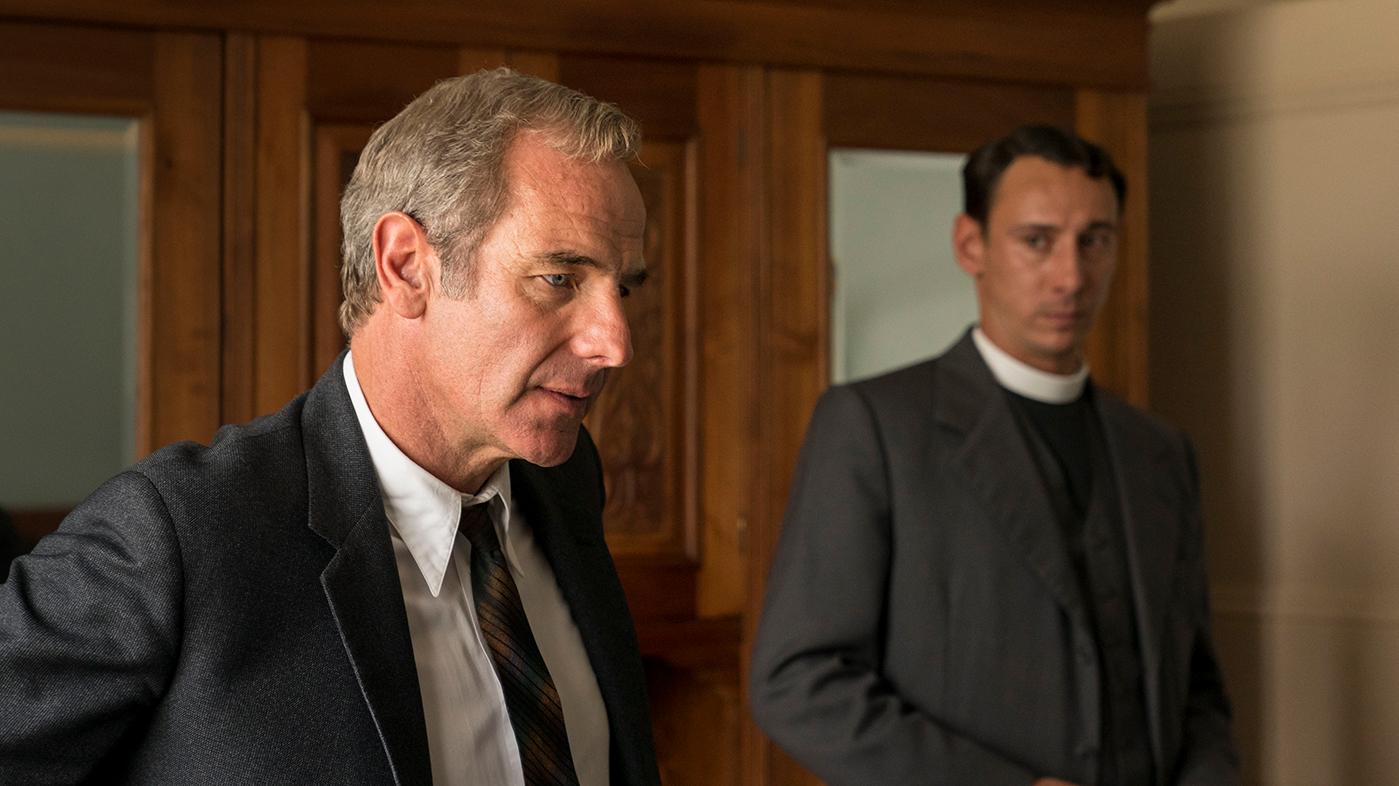 With Sidney gone, Geordie has enlisted Leonard's help in solving a case. Photo: Kudos and MASTERPIECE

Despite his grumbling about the changing times, Geordie is trying to keep up. His anniversary with Cathy is coming up, and she has brought him to the department store where she now works to buy him a fashionable new suit, chosen by her charming coworker Anthony.

So when Geordie responds to a reported robbery at a mathematics laboratory, he’s wearing sleek, au courant duds. The lab’s work focuses on a trailblazing computing system called UNIAC and is led by the brilliant Alex Simms. When Simms answers the door, he seems out of sorts and tries to turn Geordie away. His young colleague Tim Amery called about the robbery, but the person he thought was a robber was just Alex, who had spent the night in the lab—false alarm.

Geordie takes a look around anyway, meeting the other two members of the lab: Alex’s wife, Jean, and the mechanically minded Karla. The two men and two women are the only people who have access to the lab. As Geordie asks questions, Tim waxes rhapsodic about a new breed of smaller computers—UNIAC takes up a whole room—while Alex acts increasingly erratic and possibly drunk. He eventually vomits then collapses. It is then that someone spots a broken tube leaking mercury, and everyone evacuates. Alex dies of mercury poisoning soon after.

While looking into Alex’s background, Geordie discovers that he had a prior arrest that was dropped without charges—he must have had friends in high places. The arrest was for having a male lover; homosexual acts were illegal in Britain until 1967. Geordie also discovers a book in the lab inscribed with a love note to Alex, signed “B.”

With Sidney gone, Geordie turns to Leonard for help—also because Leonard might know about clandestine gay communities. Through an innuendo-laden conversation observed by the oblivious Mrs. C, Leonard and Daniel point Geordie to the Ganymede Club, a gathering place for homosexuals.

Geordie heads off to the club, and Leonard, excited by the prospect of solving crime, tags along. Between Geordie’s trim new suit and Leonard’s knowledge, the pair get into the club and also manage to match the handwriting of the inscription in Alex’s book to one “Robert Hazelwood” in the sign-in book. Hazelwood was at the club the previous night. 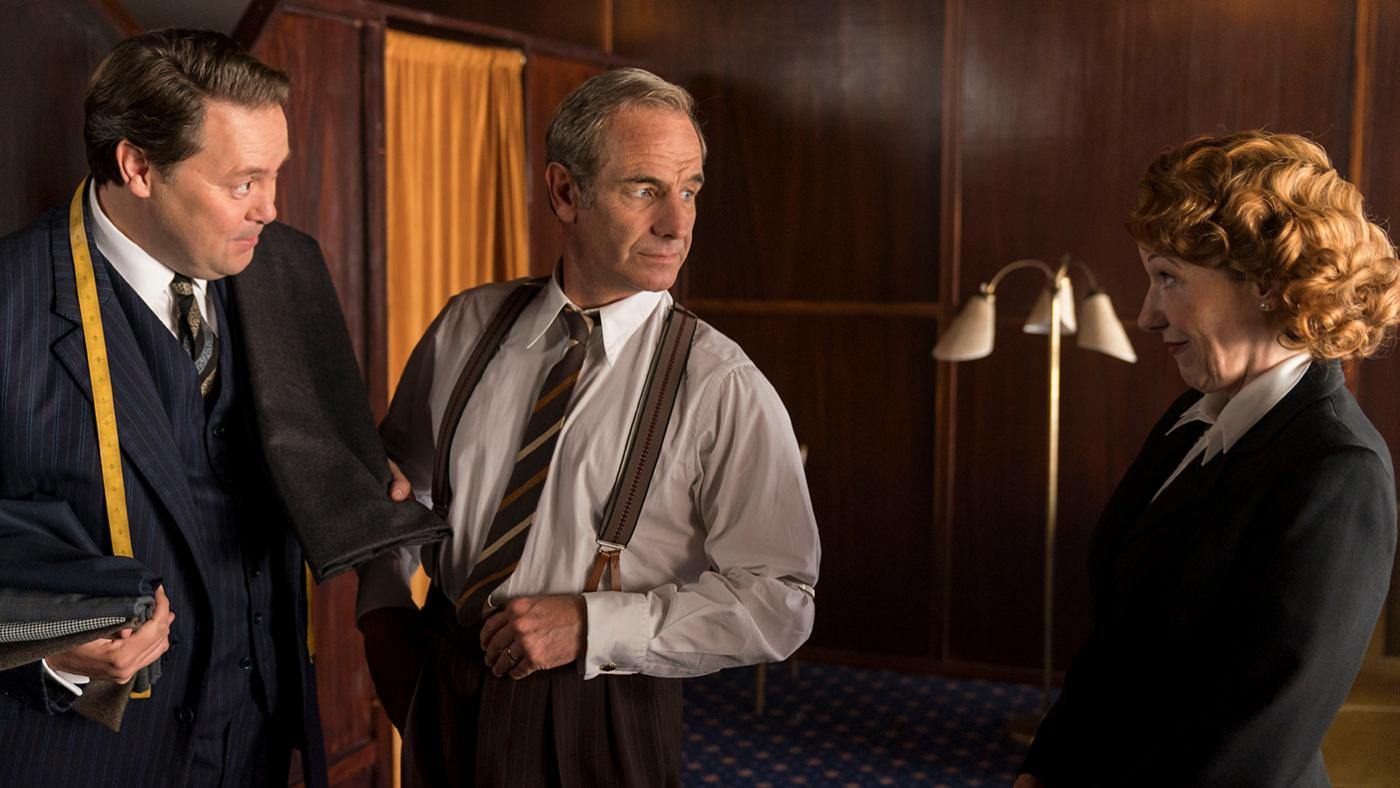 Cathy's coworker at the department store helps Geordie modernize by choosing a stylish suit for him on his anniversary. Photo: Kudos and MASTERPIECE

While at the club, Geordie spots Jean Simms, who flees as soon as she sees him. Geordie and Leonard catch up to her and begin to ask questions. She admits that she knew about Alex’s lover—she married Alex to keep his name clear and save him from accusations of homosexuality—and had come to the club to speak with the lover and find out if he knew anything about Alex’s death. Alex had been seeing Bobby Guthrie—pseudonym Robert Hazelwood—for about a year, and Alex was with Bobby at the lab last night.

Geordie and Leonard go to see Bobby at his home. His wife opens the door, and tells them that Bobby has been sick all day. Geordie realizes it’s mercury poisoning and calls an ambulance.

He and Leonard return to the lab to search for more clues while Bobby is at the hospital. Geordie notices that Jean is missing her wedding ring and begins to speculate that she was jealous of Alex’s affair with Bobby. But Karla, the lab assistant, quickly jumps to Jean’s defense. Jean couldn’t have killed Alex because she left with Karla last night: Karla and Jean are lovers. Since Jean is a lesbian, there was also no reason for her to be jealous of Alex in their marriage of convenience.

After grabbing a pint with Leonard, who is getting a thrill from working the case, Geordie heads off to his anniversary dinner. Cathy is quiet the whole evening, abruptly wants to leave in the middle of dessert, and seems shaken. She doesn’t tell Geordie that she was sexually assaulted earlier that day by her coworker Anthony: after he helped her pick out a new dress and took her out for drinks, he pinned her against a wall and tried to kiss her, ignoring her protestations.

Confused by Cathy’s behavior, Geordie becomes easily frustrated the next day when he returns to Bobby Guthrie’s home and Bobby stonewalls, saying he doesn’t know Alex or anything about the lab. Geordie searches the bedridden Bobby’s jacket and finds tape from the UNIAC, but Bobby claims ignorance—so Geordie outs him to his wife, telling her that Bobby was having an affair with a man.

Leonard is appalled. He reprimands Geordie and decides he will have nothing more to do with the case. He obviously knows the struggles of being a gay man and sympathizes with Bobby. He has his own difficulty soon afterwards, when Mrs. C walks in while Daniel is kissing him. Stunned, she runs away. 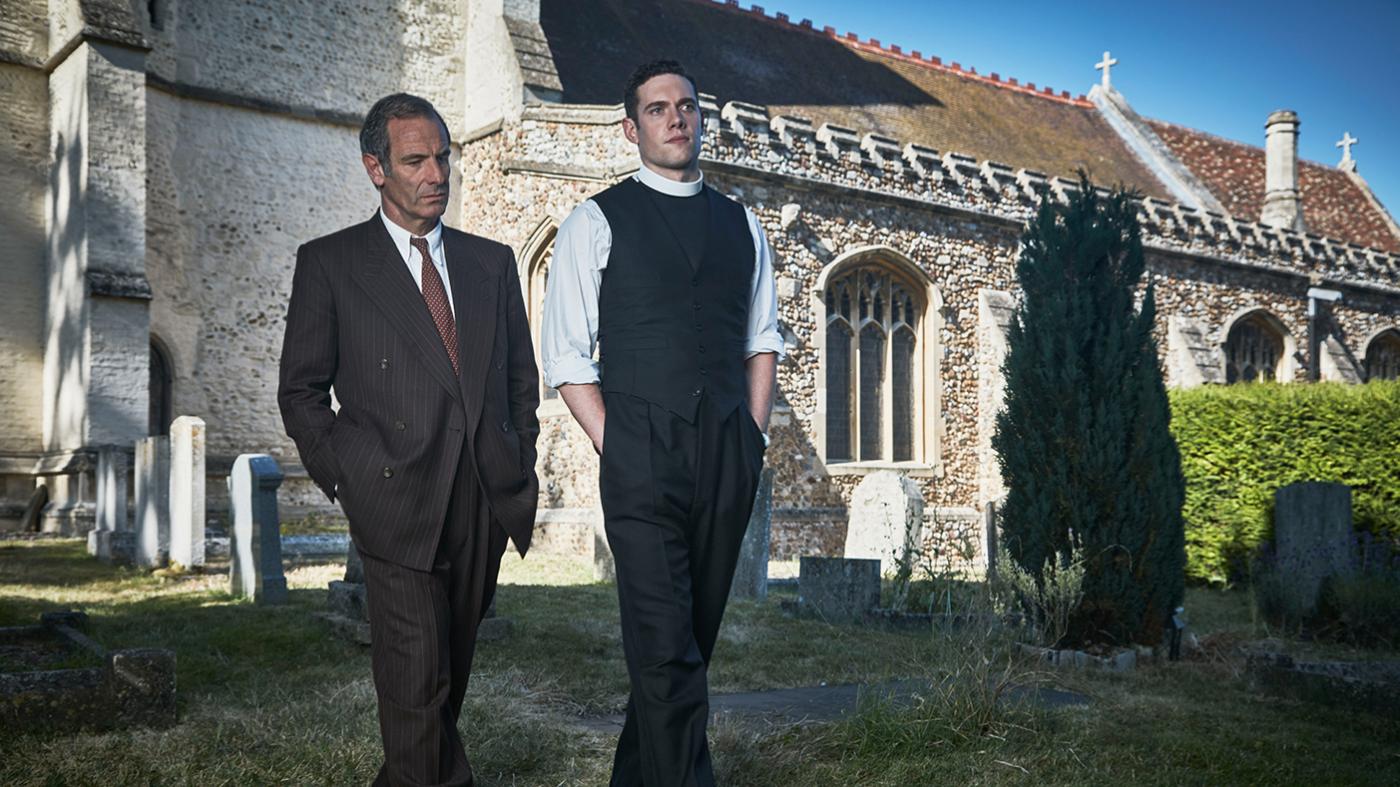 Geordie is starting to like Will Davenport, Sidney's replacement as Grantchester's vicar. Photo: Kudos and MASTERPIECE

Mrs. C had recommended Leonard to be Sidney’s replacement as vicar of Grantchester and favored him over the archdeacon’s choice of Will Davenport, the leather jacket-wearing, motorcycle-riding young rebel. But the revelation that Leonard is gay has shocked the normally opinionated Mrs. C into silence. When the archdeacon arrives at Grantchester with Will and asks why Leonard should be vicar instead, she says nothing—and Leonard, chastened, tells the archdeacon that he’s not ready. Thus, even though Will argues that Leonard should take the job, Will becomes Grantchester’s new vicar.

While Mrs. C gives Will a cold reception, Leonard is a bit more friendly. Geordie finds both priests at the pub and apologizes to Leonard for his cruel behavior towards Bobby. He has had Tim Amery at the computer lab read the tape found in Bobby’s jacket: it’s an image of a heart and a quote: “two bodies, one soul,” Aristotle’s definition of love. Geordie is at a loss, but Will and Leonard encourage him to keep searching for clues.

Back at the lab, Geordie finds one: Jean’s wedding ring, lost near the tube that was broken and leaked mercury. Tim mentioned that Jean and Alex argued; perhaps she tried to kill him? But no, how would her ring fall off while she smashed the tubes?

Geordie figures it out. Tim killed Alex because he was frustrated by the lack of progress; he thought Alex was washed up, and he wanted to start researching and using newer computers. Tim called in a fake robbery to bring the police then set Jean up by leaving her ring near the tube, knowing that the police would assume the jealous wife killed Alex. As Geordie lays out the evidence, Tim begins smashing UNIAC with a wrench. Geordie finally stops him cold with a punch, ripping his stylish new suit in the process. So much for being fashionable.