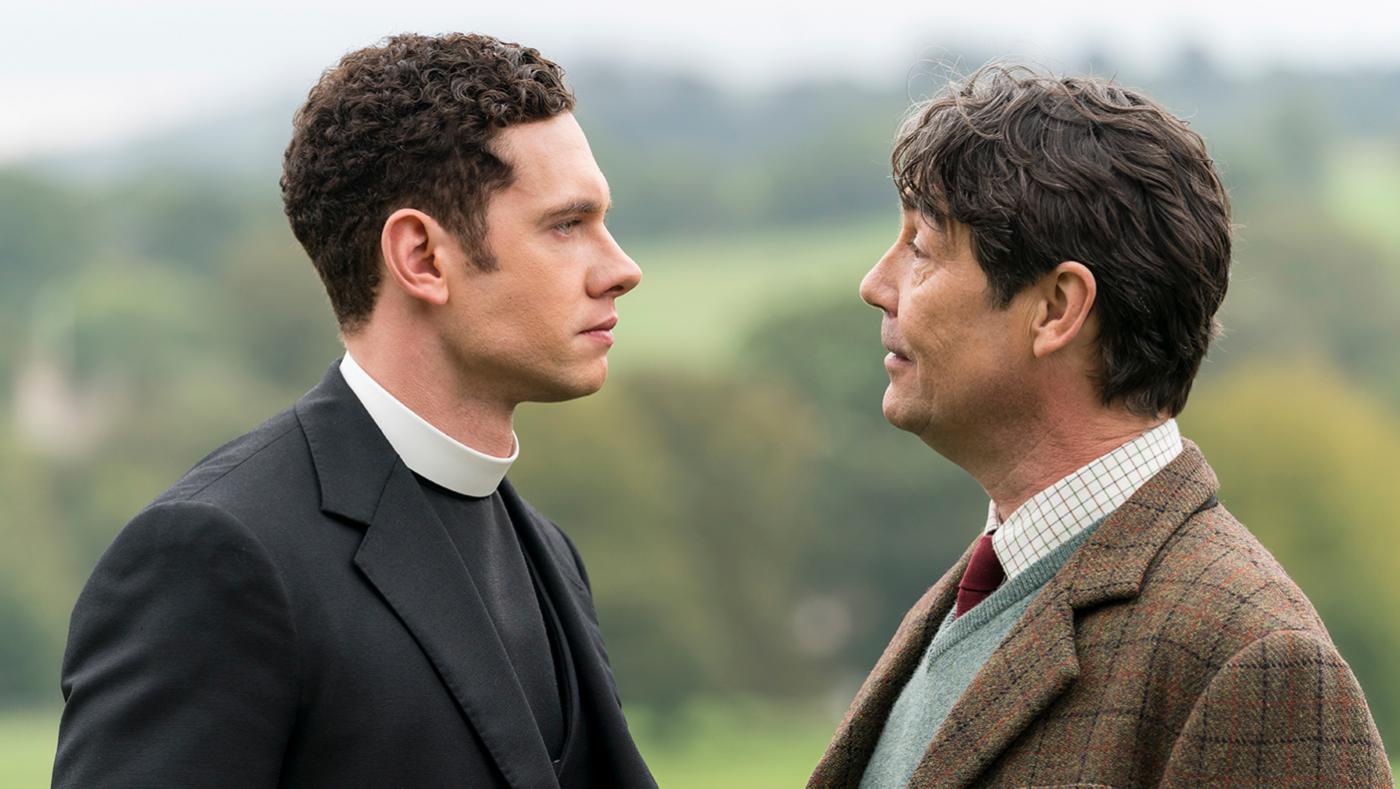 Will returns home to confront his unloving father. Photo: Kudos and MASTERPIECE

Despite his best efforts, Will is not having an easy time transitioning into his role as vicar of Grantchester. The rift between Mrs. C and Leonard has Leonard on edge, leading him to overreact when Will forgives a girl who stole a coin from the collection plate during mass, instead of punishing her. Will sees how Leonard is suffering and goes to Mrs. C to try to mend their relationship, appealing to her sense of pride by saying the vicarage is falling apart without her. But when Mrs. C stops by for a parish meeting, she overemphasizes Leonard’s reliance on her, leading him to turn her away.

A visit home might seem to provide a welcome respite from Will’s struggles at Grantchester, but the trip is spurred by drama and ends up being more trying than any clerical duties. When Will receives a call from one of his family’s maids, he asks Geordie to come with him to his ancestral home. They first stop at the maid’s house, where they find the Davenport family’s gardener, Eli, whom Will was close with as a boy, in pain. Will’s father Thomas has beaten Eli.

Arriving at the massive Davenport family manse, Will and Geordie are invited to join Thomas, his wife, Amelia, and their friends Eddie and Meredith for lunch. Thomas and Eddie run roughshod over Will and Geordie’s attempts to ask about Eli’s beating, discussing an Irish thoroughbred horse they are buying together and taunting Will about his career choice and wild younger years. Thomas calls Will a “constant disappointment” and brings up a youthful dalliance with a prostitute while Amelia tries to steer the conversation away from her son.

Finally, Will and Geordie get Thomas to discuss Eli. Thomas straightforwardly says that Eli was caught stealing—Eddie saw him coming out of the pawnshop after selling one of Amelia’s brooches—so Thomas punished him. He even calls in Eli to confirm the account; Eli reluctantly says he is a thief who deserved the punishment. 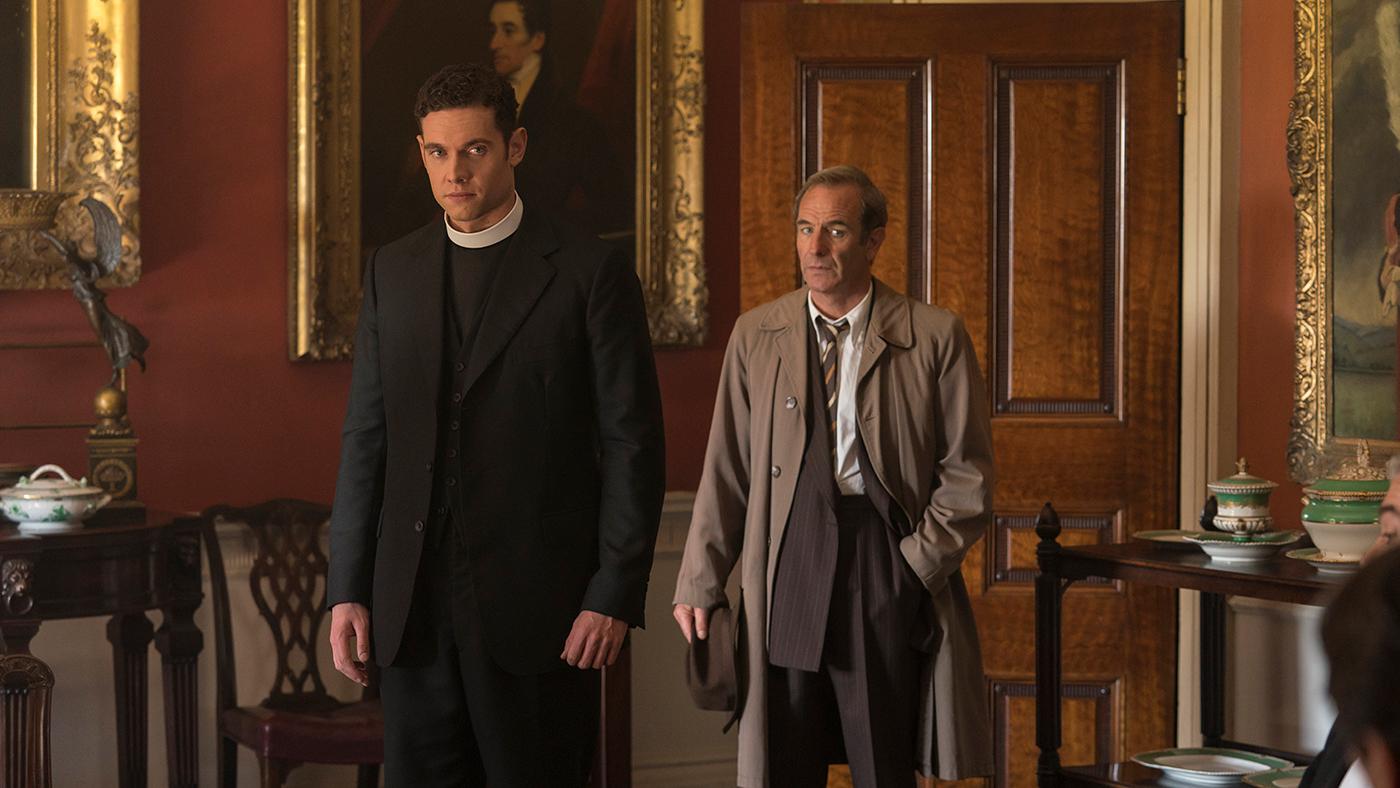 Geordie learns surprising things about Will's family and his past. Photo: Kudos and MASTERPIECE

Having survived that trying and humiliating lunch, Will and Geordie sit down for a drink before Geordie returns to Grantchester—it seems there’s nothing he can do to charge Thomas or protect Eli. Will reveals that, despite appearances, his family is no longer wealthy. They’re living in a decaying old estate but struggling to pay the bills—not that they would ever admit it. Geordie opens up about his own family difficulties, telling Will that he thinks Cathy is having an affair. Having observed Anthony’s solicitousness and possessiveness around Cathy—the mark of a predator, not a lover—Geordie has come to the wrong conclusion. Will advises him to talk to Cathy about it.

But before Geordie can leave to do so, Meredith comes downstairs, soaked in blood and terrified. Eddie is dead in bed from a wound to the head.

Suspicion immediately turns on Meredith: she was sleeping next to Eddie when he died. They did not have a happy marriage: both had their fair share of affairs; Meredith had one with Will when he was younger. He even got her pregnant. Although the pregnancy was aborted, Eddie never forgave her.

But Thomas blames Eli for the death. When the local police search Eli’s home, they find a cigarette case belonging to Eddie, while Geordie discovers a stack of receipts from the pawnbroker for various of Amelia’s belongings. As the police bring in Eli for questioning, his wife says that this has gone on for too long, and tells Will to ask his mother about the pawnbroker.

When Will confronts Amelia, he realizes that Eli hasn’t been stealing—Amelia has been giving him the items to pawn, to dredge up some cash so she can pay the Davenport staff. Money is very tight. Will breaks through his mother’s desire to save face and convinces her to go to the police and exonerate Eli.

But as Geordie is escorting Amelia to the car, Thomas appears and asks where they’re going, then begins to rage at his wife, cursing her for staining their reputation. Amelia changes her mind, and rushes back into the house. Thomas has already chastened Will, too, telling him that his job reflects badly on the family and taunting him. 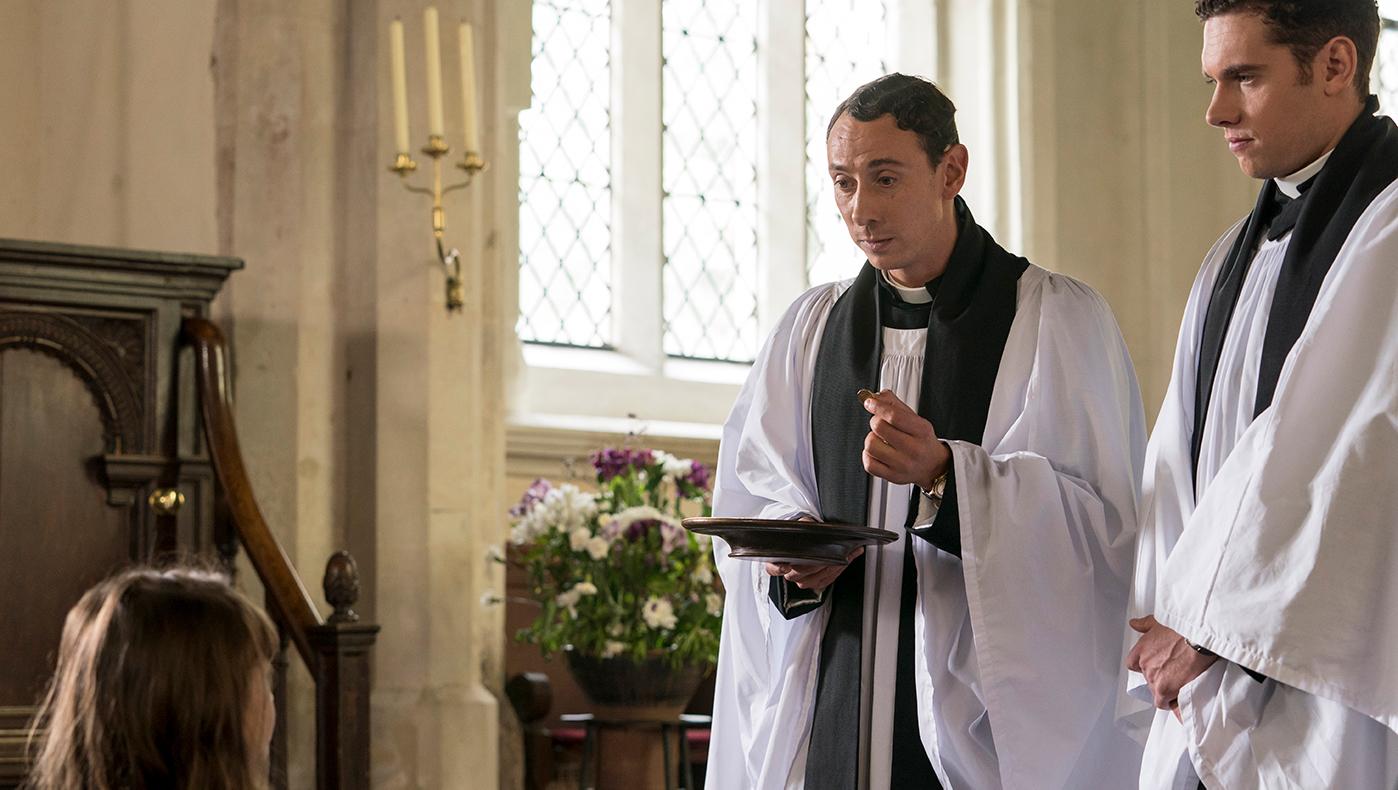 Will's unorthodox manner of dealing with a misdemeanor puts Leonard over the edge. Photo: Kudos and MASTERPIECE

Meanwhile, Geordie has noticed a broken nail tip on the floor next to the bed where Eddie was found dead. Perhaps that’s what killed Eddie, and, if so, maybe he had been stabbed by it before he got to bed—which means anyone could have killed him. Geordie now suspects Thomas may have killed Eddie: he has seen how violent he can be towards Eli, Amelia, and Will. But Will refuses to believe it; despite his father’s aggression towards both him and his mother, he still wants to protect him.

But now Will is more open to the idea that his father could have done something, and realizes while watching Thomas look at photos of the horse he was buying with Eddie that Thomas was conning his friend: the saddle on the horse is one that has been on the Davenport estate since Will was a boy, even though the horse is supposedly en route from Ireland. Thomas invented the horse to get money from Eddie.

Will brings Geordie to see the saddle in the decrepit stables, and Geordie matches the nail tip that killed Eddie to a broken exposed nail in the wall. They piece together what happened. Eddie must have gone to see the stables where the horse was supposed to be housed, then realized that Thomas was conning him. A fight ensued, Thomas pushed Eddie, and Eddie fell back against a wall, the exposed nail piercing his head. The broken tip stayed in his skull long enough for him to stumble to bed, where he bled out.

When Will and Geordie confront Thomas, he agrees to go with them to the police station, but first asks for a moment alone. He then walks into the forest and shoots himself.

Will returns to Grantchester to find the archdeacon waiting. Leonard, frustrated about Mrs. C and upset that Will has left him to run the vicarage on his own for so long, has reported the incident with the stolen coin. After a chastisement from the archdeacon, Leonard himself lays into Will. When he calls Will a “constant disappointment”—the same thing Thomas said about Will—the vicar punches him. Leonard’s not the only one in a fragile emotional state.

Another confrontation finally comes when Geordie asks Cathy if she’s having an affair. She haltingly tells him that Anthony assaulted her. Geordie silently gets up and walks out the door, ignoring Cathy’s desperate pleas that he not do anything—this is her fight.