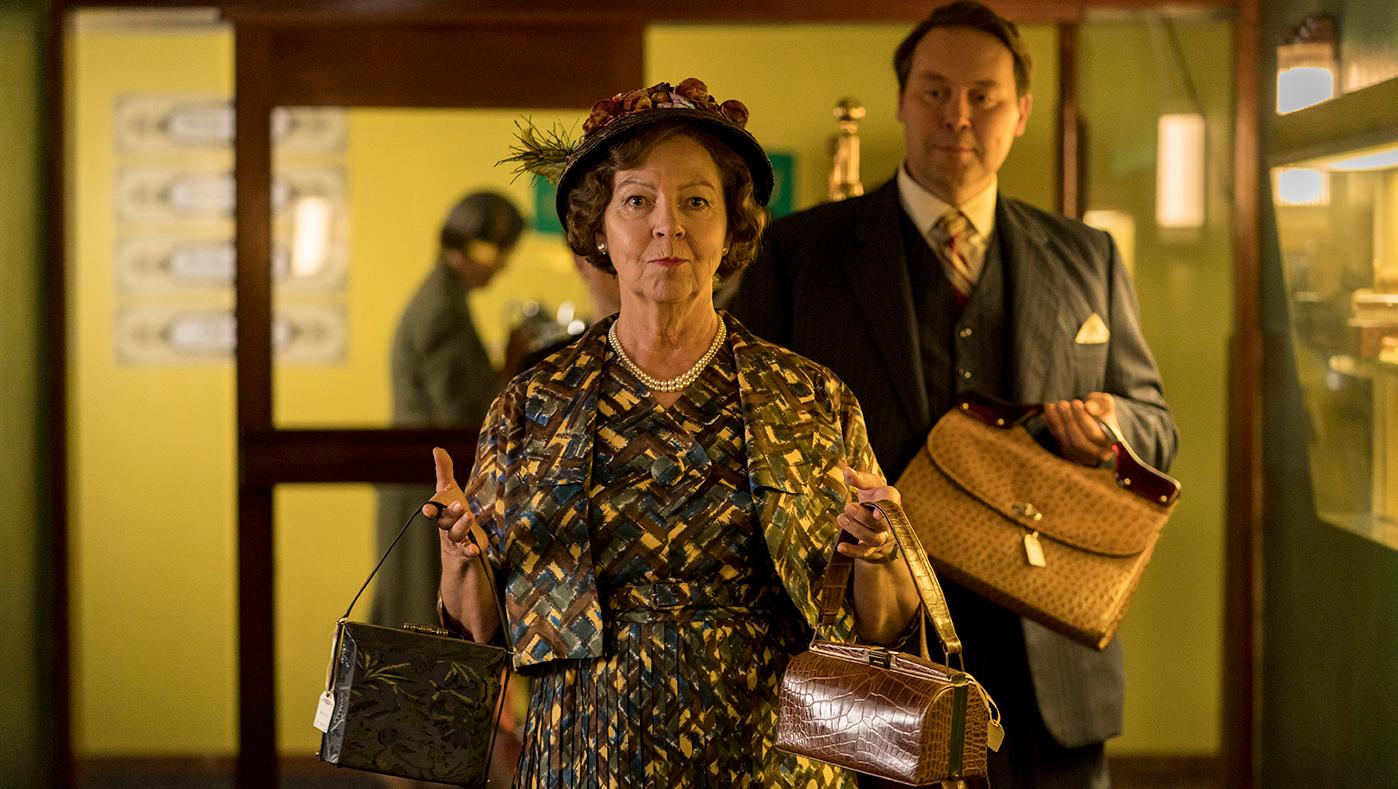 Mrs. C and Cathy contrive a plan to do something about the predatory Anthony. Photo: Colin Hutton/Kudos and MASTERPIECE

Grantchester is available to stream. Read our recaps of the previous episode, the first episode of the following season, and other seasons.

Will is torn between filial and clerical duties. In the wake of his father’s suicide, he is in charge of the family estate, which is too large and expensive to maintain, given the family’s meager wealth. But he also must attend to the vicarage, as Leonard has left to stay with Daniel in the wake of his confrontation with Will and so far has not responded to Will’s apologies and pleas to come back.

Leonard actually feels—and Daniel agrees—that he’s the one who should apologize to Will, for piling on trivial complaints at a time of distress. But Leonard is in a dark place; he thinks that everyone hates him, and that Mrs. C may be right that he’s destined for hell.

Geordie has begun to believe that the whole country, especially its young men, is going to hell. He no longer trusts men, having learned about Anthony’s assault on Cathy. Although he has respected Cathy’s wish for him not to do anything to Anthony—it’s her fight—he’s barely able to speak to her now, knowing that she’s going to work with a predator every day. He also refuses to allow Esme, his eldest daughter, to go to a dance.

Perhaps that was for the best: the morning after the dance, a boy named Donald is found dead in an abandoned car behind the dancehall. The two boys who found the body and reported it to the police are disrespectful to Geordie and Will when they arrive, so Geordie sends them to be locked up for a few hours, to Will’s chagrin—the vicar thinks the situation with Cathy is driving Geordie’s abuse of power.

There’s worse to come for Geordie: Donald was a student at Esme’s school, and inside his pocket is a photo of her. She insists that she barely knew Donald, and classmates of his say he didn’t have many friends. The janitor at the dancehall says he got in a fight with someone on the night of the dance, while Donald’s teacher asks if it might have been suicide; Donald struggled with some issues.

Leonard continues to suffer: Will finds him crying in the church and tries to convince him that God still loves him, no matter his sexuality. Daniel offers opposite advice, telling Leonard to leave the church and accusing him of self-flagellation for remaining in an institution that doesn’t accept him for who he is. Leonard lashes out at Daniel in response.

Mrs. C is also feeling Leonard’s absence, so her husband sends her to the department store where Cathy works to buy some new clothes in an attempt to cheer her up. Cathy is eager to help Mrs. C, but her mood darkens when she walks into a fitting room and finds Anthony assaulting another woman clerk. Cathy walks away and tells Mrs. C about Anthony’s predations, and the pair contrive to do something.

Esme shows up at the vicarage to ask Will for advice: she and Donald had been writing love letters to each other, and the afternoon before he died he went to kiss Esme. Another boy—one of the disrespectful ones who found Donald’s body—saw, teased Donald, and got in a fight with him. Esme is afraid Donald died because of her.

Will assures her that’s not true, and brings the information about a fight to Geordie. Geordie immediately turns on the disrespectful boy, who’s still in a cell, to “learn his lesson,” and refuses to believe his desperate claims of innocence. Will tries to calm Geordie down, but Geordie lashes out at Will. 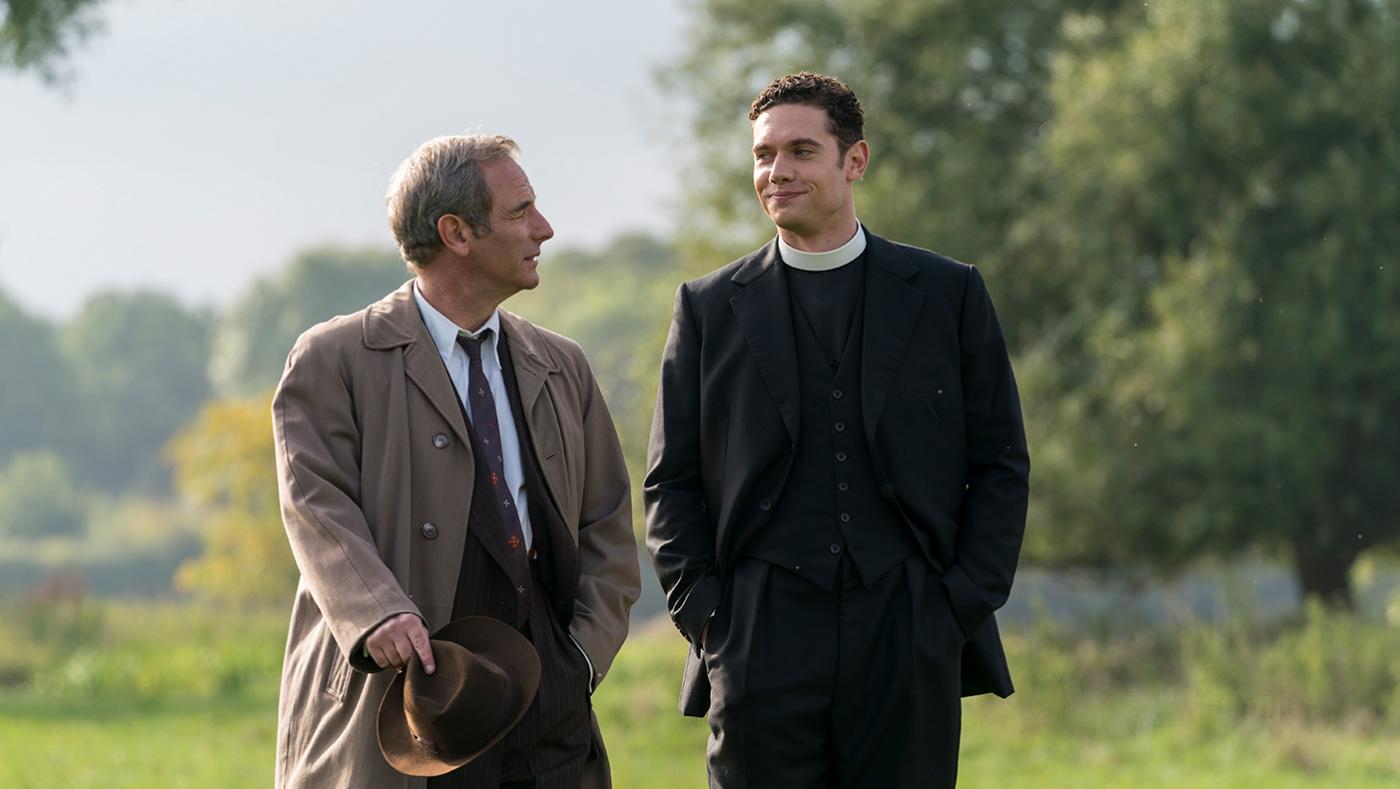 Geordie and Will are both struggling with familial issues, but their friendship helps them through them. Photo: Colin Hutton/Kudos and MASTERPIECE

When the postmortem comes in, however, Will turns out to have been right to believe in the boy’s innocence: Donald was drunk and choked on his own vomit. Geordie apologizes to Will and tells him about the assault on Cathy; it’s why he’s angry all the time.

Donald’s death may have been an accident, but there was no vomit in the car where his body was found—was he moved there after his death? Will recalls seeing the dancehall janitor cleaning up vomit in a storage closet: maybe that’s where Donald died. In the closet, Geordie and Will notice an odd symbol painted on the wall. They also see that the door is damaged by someone trying to get out, and find a vomit-soaked rag. Donald was locked in the closet and gagged—that’s how he choked and died.

Who did it is still a question. In the meantime, Daniel comes to Will: Leonard has left. Will understands Leonard’s relationship with God, while Daniel is an atheist, so he asks Will to find Leonard and speak to him.

Leonard is sitting at a rural bus stop when Will rides up on his motorcycle. Will knows Leonard is struggling so much because he has suddenly lost his family, with Sidney gone and Mrs. C refusing to interact with him. Will convinces Leonard to come back to the vicarage. While riding his motorcycle with Leonard on the back, he notices the scars on Leonard’s wrists from his suicide attempt. They remind him of a scar he noticed on one of Donald’s classmates’ wrists—it matches the symbol painted in the storage closet where Donald died.

The girl, Wendy, reluctantly tells Geordie and Will that she’s part of an “underground group” called the 4th Realm, and they will hurt her if she says more. She does tell them that all the classmates have lied during the investigation.

Geordie rages at another classmate. The boy, terrified, says it was all Kevin Moran. Kevin is a scrawny kid who found acceptance in the 4th Realm and thus clung tight to it and its rules. Donald was going to leave the group and tell others about it, so Kevin locked him in the closet and gagged him during the dance as punishment. It was only a half hour; his death was an accident. So Kevin dragged Donald’s body to the abandoned car behind the dancehall to hide his culpability.

Will chastises Geordie for his continuing use of angry intimidation of young people—and then realizes that Kevin wasn’t the leader of the 4th Realm. Wendy said everyone lied, so Kevin must be lying too. The true leader was the class’s teacher, who valued obedience and discipline above all—and who is Wendy’s father.

At the teacher’s house, he admits that he started the 4th Realm to improve grades via a system of rewards and penalties. He did tell the boys to punish Donald, but it went horribly wrong. He has used that particular punishment before: Will and Geordie find Wendy gagged and tied up in a shed behind the house. Geordie arrests him.

Mrs. C and Cathy set about taking down another abuser. Mrs. C arrives at the store in her finest clothes, saying she’s prepared to spend a fortune. But she tells the owner it’s on one condition: that he dismiss Anthony for his predatory behavior. Now without a job, Anthony blames Cathy and calls her a slut; she stands up to him and says it’s no one’s fault but his.

In the wake of this triumph, Mrs. C returns to the vicarage and tells Leonard and Will that she’s ready to come back—on the stipulation that Daniel not ever come visit. Leonard agrees. “We don’t work without you,” he tells her, holding her hand.

Cathy returns home in great spirits, breaking the icy tension between her and Geordie with a kiss. Esme is still understandably upset over Donald’s death, so Geordie, Cathy, and Will cheer her up by organizing another dance; this time, she’s allowed to go. The dance also lightens Will’s mood when he meets Esme’s teacher and asks her for a drink. He has just told his mother that they will have to sell the family estate to cover the debts, and she responded by accusing him of being just like his father. So a drink sounds great.