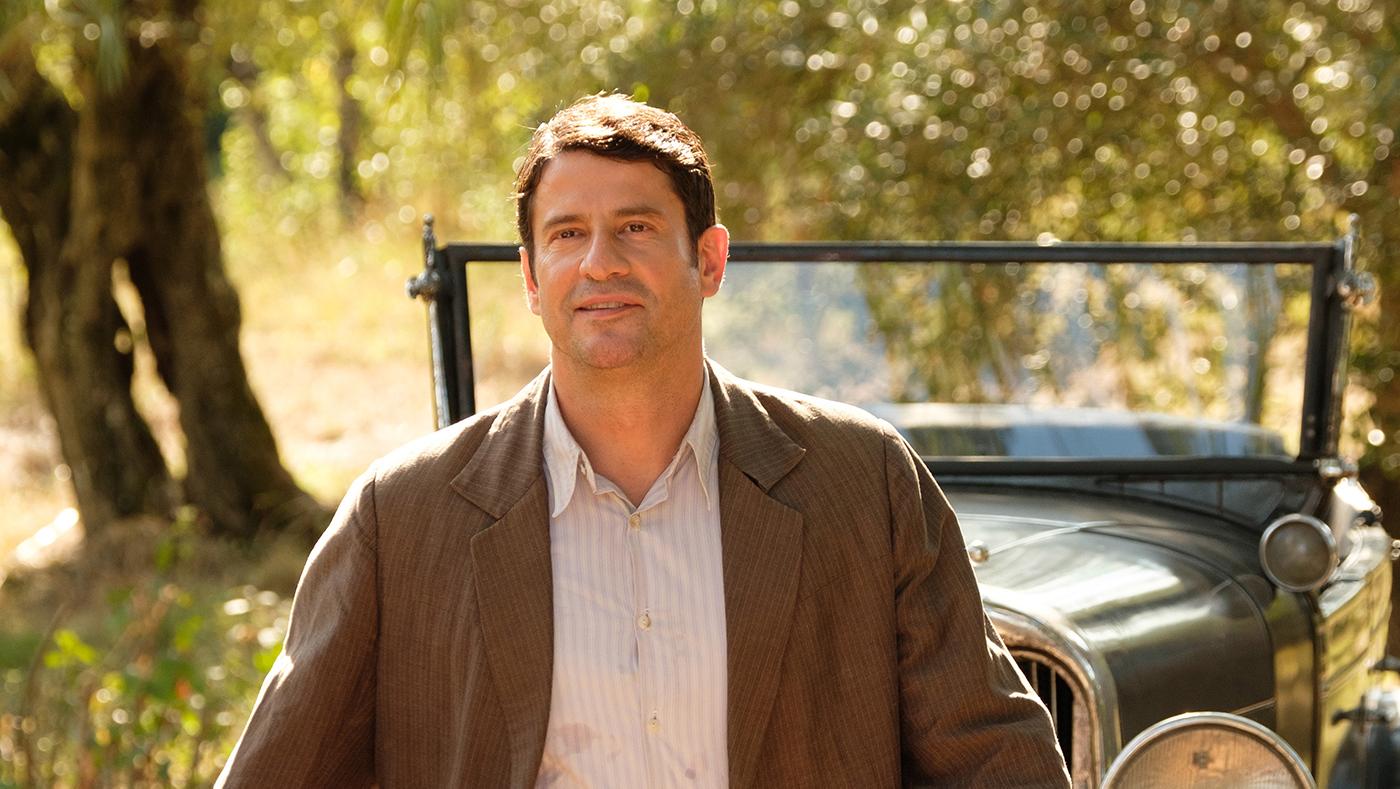 An excursion puts Spyros in an awkward situation between his wife and Louisa. Photo: Sid Gentle Films 2019

Louisa needs a holiday. Between her two new guests – an eccentric English countess and a silent Armenian – Basil, and the back-to-back departure of two of her children, she needs some time to relax. So she decides to visit Larry: she and her two remaining kids can take their boat up the coast, bring a bottle of champagne that Henry Miller sent for Larry, and have a picnic.

While shopping for the trip, she runs into Spyros – and his wife, Dimitra, whom she has never met. Trying to be polite, she asks them to join the picnic – and Dimitra says yes.

Margo has also found herself in an awkward spot. Her letter asking her Aunt Prue and Uncle Geoffrey if she could stay with them never reached their home, so her appearance on their doorstep in England is quite a surprise. They let her stay, and invite her to an exciting event in their lives: a talk Geoffrey is giving, now that he is retired, about “My Life in Insurance Broking.” Needless to say, Margo thinks the conventional Geoffrey and Prue are the odd ones, and vice versa.

Back in Corfu, Leslie invites Luga along on the picnic: “You’re family now,” he says. Theo is also coming, making an even eight, which means Spyros will have to drive while others take the boat. Dividing up the party, Leslie suggests Louisa go with Spyros, Dimitra, and Basil in the car so that she can get to know Dimitra – he’s keen on making the whole thing less awkward. This despite the fact that both Theo and Luga get seasick – but then Luga gets carsick, too.

Hijinks ensue on the way there. Spyros throws up on Leslie; Leslie pushes Gerry into the sea for laughing; Dimitra jumps out of the car when a large insect flutters around her head; Basil flirts with Dimitra.

But finally, our heroes arrive at Larry’s residence. No one is there.

Larry has decamped for Paris; he never received Louisa’s letter about the visit. So the Durrells and company set up their picnic on a slope overlooking the sea. From there, they hear explosions: fishermen illegally dynamiting fish. Everyone goes to look and then heckle the fishermen, led by Gerry, who finds the method barbaric. When they turn back to their meal, goats have rummaged through it all.

So off everyone goes in search of somewhere to eat. The only option is a rundown taverna, owned and operated by Captain Creech, of all people. His presence is enough to make Louisa try to leave, but everyone – unhappily – decides to stay and eat.

It’s a tense meal: Creech extorts Basil, who, having dropped the champagne bottle, is paying for the food. Creech also announces that he has Louisa’s letter to Larry, since Larry is gone, and that Louisa said some “appreciative” things about Spyros. This puts up Dimitra’s hackles; she and Spyros have already been arguing in Greek on and off throughout the day, to the point where Luga mutters that they are like strangers.

Everyone’s mood only sours from there. Leslie goes to check on the boat – and finds the fishermen they all yelled at towing it away. Once they have it in open water, they blow it up.

Gerry, at least, finds some joy – but it makes everyone else grumpier. Creech has a pair of lemurs, left him by a traveler, and Gerry buys them to add to his growing zoo – but not before they climb all over Dimitra. With the boat blown up, the lemurs are just another pair of passengers who must squeeze into Spyros’s car to return home.

On the road back, they must stop and take a break to let the car cool down – it has overheated. As everyone indulges in a litany of complaints, Louisa tries to put a brave face on the eventful day and shares an amused look with Spyros. Dimitra notices, and tells Spyros that she is going to walk home, unless he tells Louisa to walk instead. Who will it be: his wife, or his friend?

Margo has a much duller afternoon in store. Geoffrey’s talk is not going well: people are either snoring or getting up to leave. Embarrassed, he ends it early. Margo takes the stage to fill the rest of the time, relating her adventures in Corfu. She wins the crowd over and demonstrates some hairstyles that she saw there. Prue and Geoffrey beam, excited by the attention that a relative of theirs is receiving. And Margo walks away with a job as a governess. Her success, she writes home to her mother, is in large part because her wild family “steeled me in the art of self-reliance.”