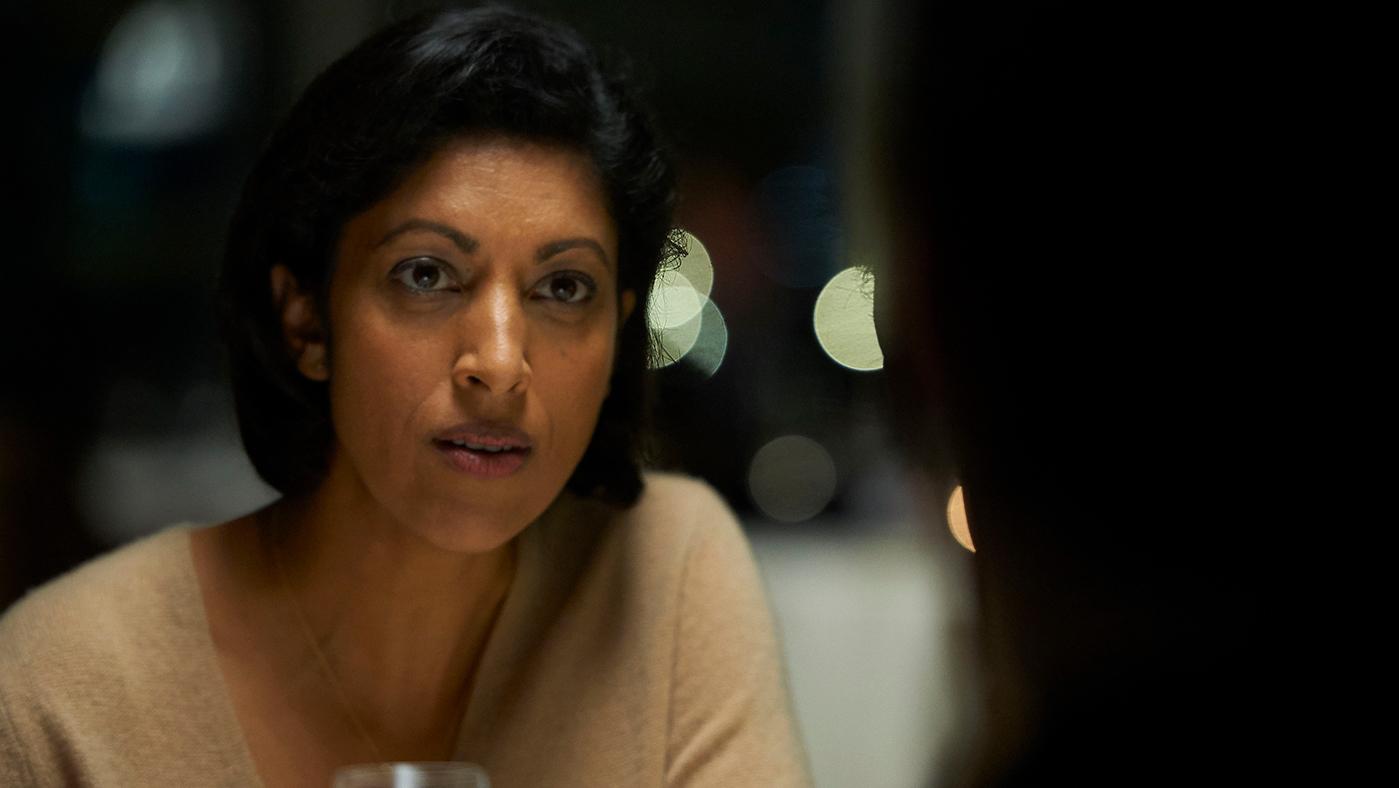 Duncan Allen may be in the newspaper business, but to him, “information’s nothing,” as he tells the woman he’s paying to sleep with him. “I’m all about story.” Hence the fantastic – fabricated – life story he tells to her.

He’s not the only one at the Post who’s lying, however. Ed Washburn has told his parents he works for a publishing house instead of a tabloid rag that they dislike. He went to Oxford, after all, so publishing would have been more fitting. Instead, he is being sent to a Halloween costume party hosted by the son of a Russian oligarch to try to collect dirt on the famous people who will be there. Worse, he’s dressed as a polar bear, because the Post is milking a story about a mistreated captive polar bear in China.

Hence Amina’s resistance to Holly’s pitch for a disability rights story to run on the front page – it won’t sell papers. Celebrities or polar bears sell – just look at the Post. So Holly finds a celebrity to talk about disability rights, and she wins her front page story.

But the Herald’s advertisement department is still looking for new forms of revenue, as the trust supporting the paper is running out. A young executive pitches a wraparound ad to Amina, one that covers the front page. She is resistant, but eventually accepts it. As she tells the newsroom when she announces the wraparound, it’s either that or laying off ten more reporters.

The newsroom is unhappy, none more so than James, one of the Herald’s few remaining investigative journalists. When he hears that the client is Lydales, a clothing giant, he walks out fuming.

James has recently returned from India, where he reported on child labor in garment factories used by several UK brands, including Lydales. Amina had already refused to run the story because James’s interviews with children took place with only a translator, not any sort of guardian – the children could have been making it up. James calls Amina a coward, and her acceptance of the wraparound confirms it for him. Brought back to her ideals by James, Amina refuses to do the wraparound – but it’s too late, the contract is already signed.

Ed has his own ethical crisis. At the party, he befriends a woman named Belle Hicks. Hicks is a popular children’s TV presenter, and Ed records their conversation as she opens up. The next day, Ed writes a takedown full of nasty quotes and gets the front page, but he regrets it.

Duncan is on a roll destroying people’s reputations. His reporters have dug up unsavory information about the leader of the steelworker union, who is threatening a strike if the government doesn’t meet the union’s demands. Duncan is encouraged in this by texts from someone named Matthew; when Duncan publishes the story, Matthew says he owes him a favor.

Duncan is also capable of cruel attacks in his personal life. He has made the rare train ride home to stay with his wife and son (he often stays overnight in London). His wife is keen to please him: she wants to save their floundering marriage for the sake of their son. When she asks point-blank if he’s sleeping with other women, he says yes, but just the one; he pays her. His wife is still willing to hold out for their son Fred – but when she snaps and asks if the news is more important than Fred, Duncan replies, “No, it’s more important than you,” and she kicks him out. 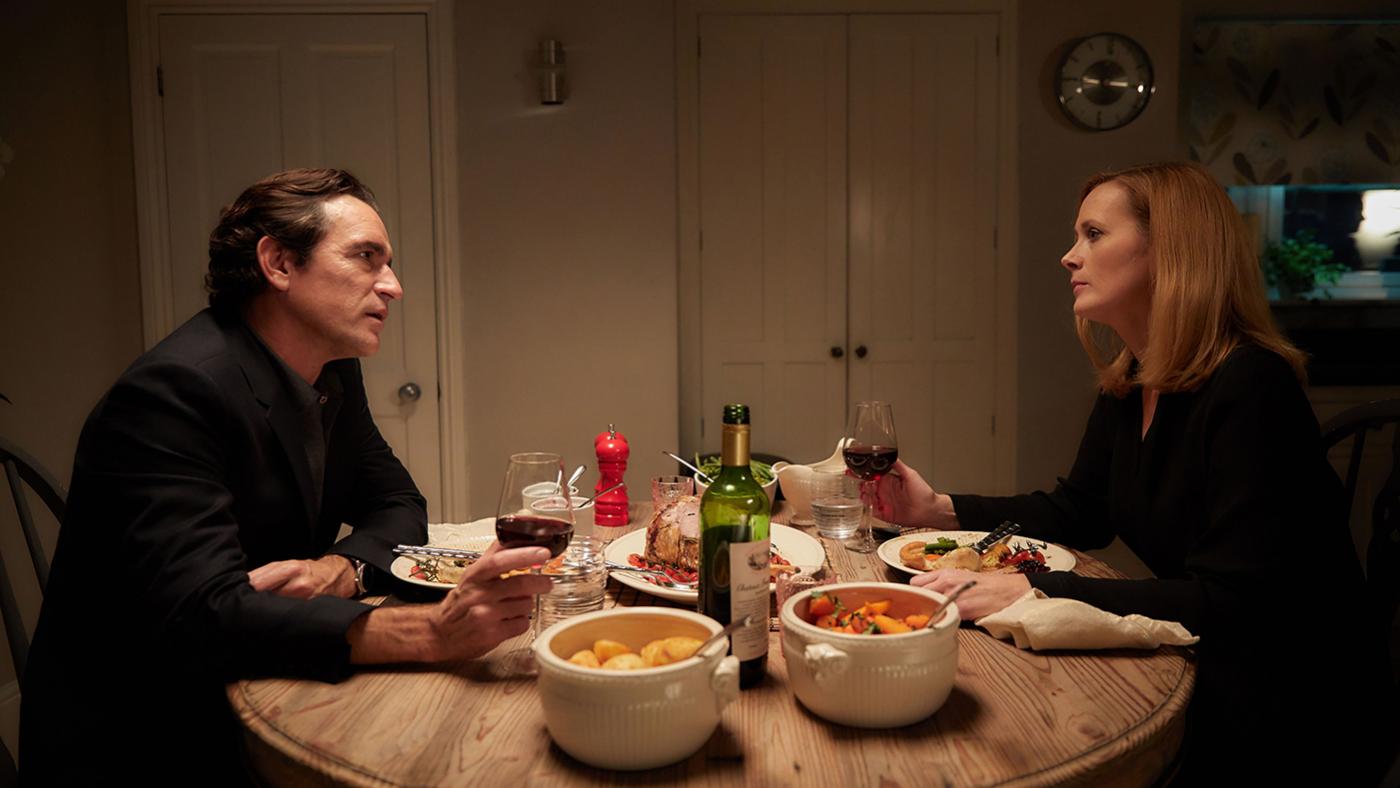 Despite his wife's best efforts on behalf of their son, Duncan has essentially given up on his marriage. Photo: Lookout Point / Robert Viglasky

Later, he tells Amina over dinner that his marriage is over. They work in an industry that keeps them alone, Amina says.

Just look at Holly. When she calls Leona to see if she uncovered anything about the mortality rates, Leona says there’s nothing to find. Holly sees through her and realizes Leona hasn’t done all the hard legwork the case requires, so she sets off in the middle of the night – there’s no one for her at her flat, anyway – to interview hospital workers.

The next day, she has Leona call the hospital executive and mention a certain cleaning agent. Next thing you know, the executive is at the Herald’s offices. Holly discovered that the hospital recently contracted a cheaper cleaning company, who was cutting corners by halving the concentration of a cleaner, thus leading to more infections. As soon as the mortality rates came out, the hospital changed back to the normal concentration. Off the record, the executive tells Holly she cares more about the patients than anyone else who will be brought in to replace her – and then she resigns from her position in anticipation of the article Holly sends Leona to write.

James also plays hardball, marching up to the Lydales CEO as he leaves his building and asking for a statement about the company’s exploitative manufacturing practices. His story can either be about that, or that the company became aware of the use of child labor and is changing its ways; it all depends on whether the CEO will make a statement. Of course, he does. And the wraparound is dropped at the Herald, while James’s article runs without the accounts of the children he interviewed.

Ed learns about shifty ethics when he runs into Belle again. She knew he was a reporter, and purposely dished to him so that she could get out of children’s TV and move into adult’s, which will result in a pay raise. Ed leaves her, walking off into pouring rain without an umbrella, carrying the polar bear suit to go get it cleaned, per his editor’s orders.

He runs into Holly in an underpass. She offers to let him use her washing machine – he’s living out of his car. And she shares a new umbrella with him – Duncan, admiring her work and noticing that she didn’t have one, sent it to her. He’s eager to poach her for the Post. And she might be considering it: she emails him a thank you and calls him a lifesaver.

While chatting with Ed at her flat, she asks him to be her flatmate, and he agrees, on a three-week trial period. He finally calls his parents and admits what his real job is.

James talks to the translator he used in India and learns that one of the girls may indeed have been making things up: she asked the translator if James believed her, and he didn’t translate it for James.

And Duncan’s mysterious Matthew, who owes him a favor? He’s the prime minister.