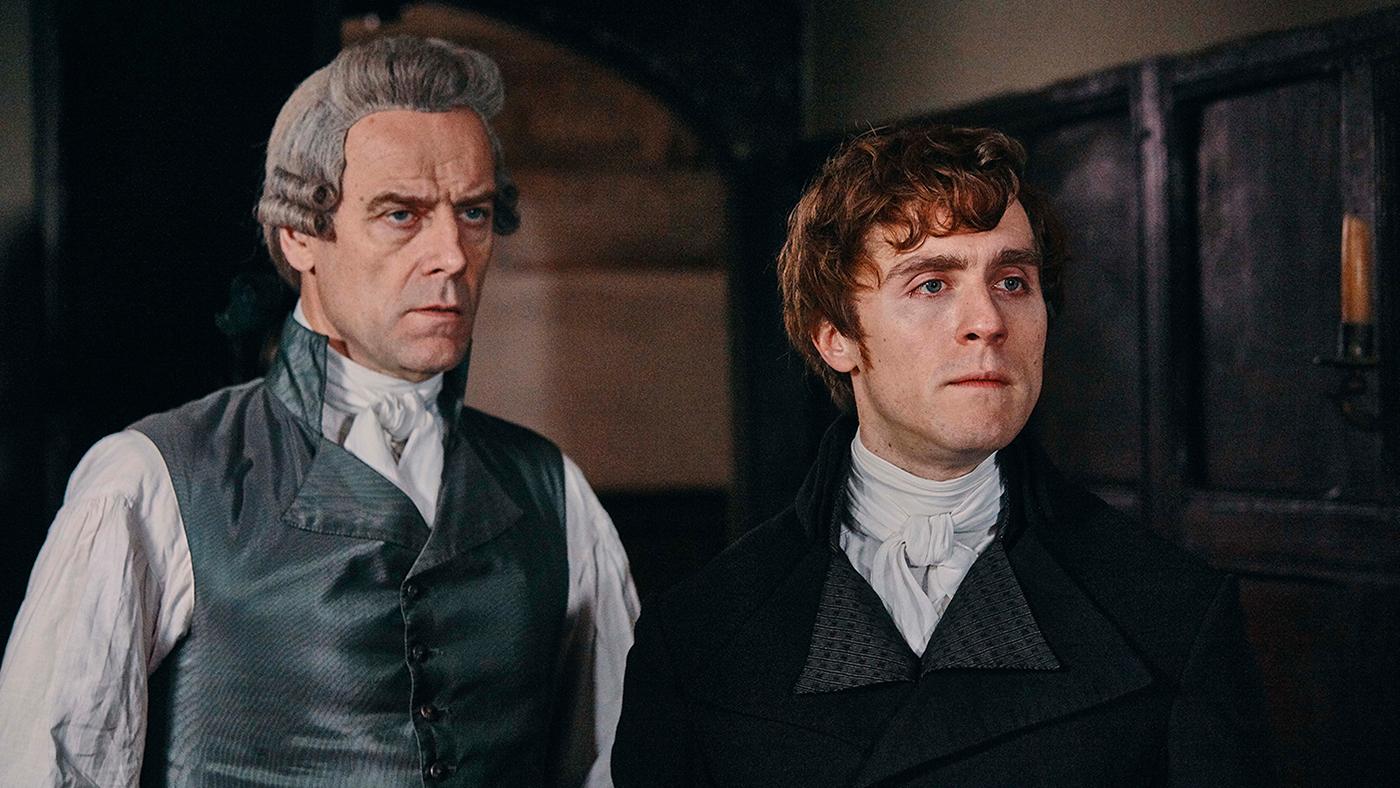 We open in London, where Ross’s spymaster Wickham is displeased that Ned is in Cornwall, where he can’t be monitored. Ross claims that Ned only wants to take Kitty back to Honduras – can Wickham make that happen? Possibly, Wickham replies, if Ned keeps out of trouble. Not a problem, Ross assures him – Ned is a changed man. (Um…really?)

Enroute back to Cornwall in the public coach (the Greyhound bus of its day), Ross and Geoffrey Charles are unexpectedly joined by Hanson and Cecily, newly returned from Bristol and on their way to Trenwith. Ross reunites with Demelza at the pub, where Ned is commiserating with a group of George’s destitute miners, suggesting that if George won’t negotiate with them, maybe they should bring their anger to George. Ross assumes he’s joking; Demelza isn’t so sure.

Geoffrey Charles introduces Cecily to the wishing well in the cove. As they flirt at dinner at Nampara, Ned angrily implies that she is there to spy for her father. Ross tells him to dial it back. Kitty, watching, is clearly unwell. Tess, meanwhile, helps herself to the port, and later, Ross warns her not to take advantage of Demelza’s good nature.

At Trenwith, George, while no longer being physically abused by Dr. Penrose, is as deranged as ever, and young Valentine, as usual left to his own devices, has to listen to his continual sobbing.

Morwenna thinks her estranged son, John Conan, must also be lonely, as Lady Whitworth has forbade him to mix with other children. Walking in the village, Morwenna is devastated when she encounters him out with his governess; as promised, he doesn't remember her. Later, we see her hiding in the shrubbery at her old home, watching him play. This will become a habit, and one day Drake follows her there, watching helplessly. 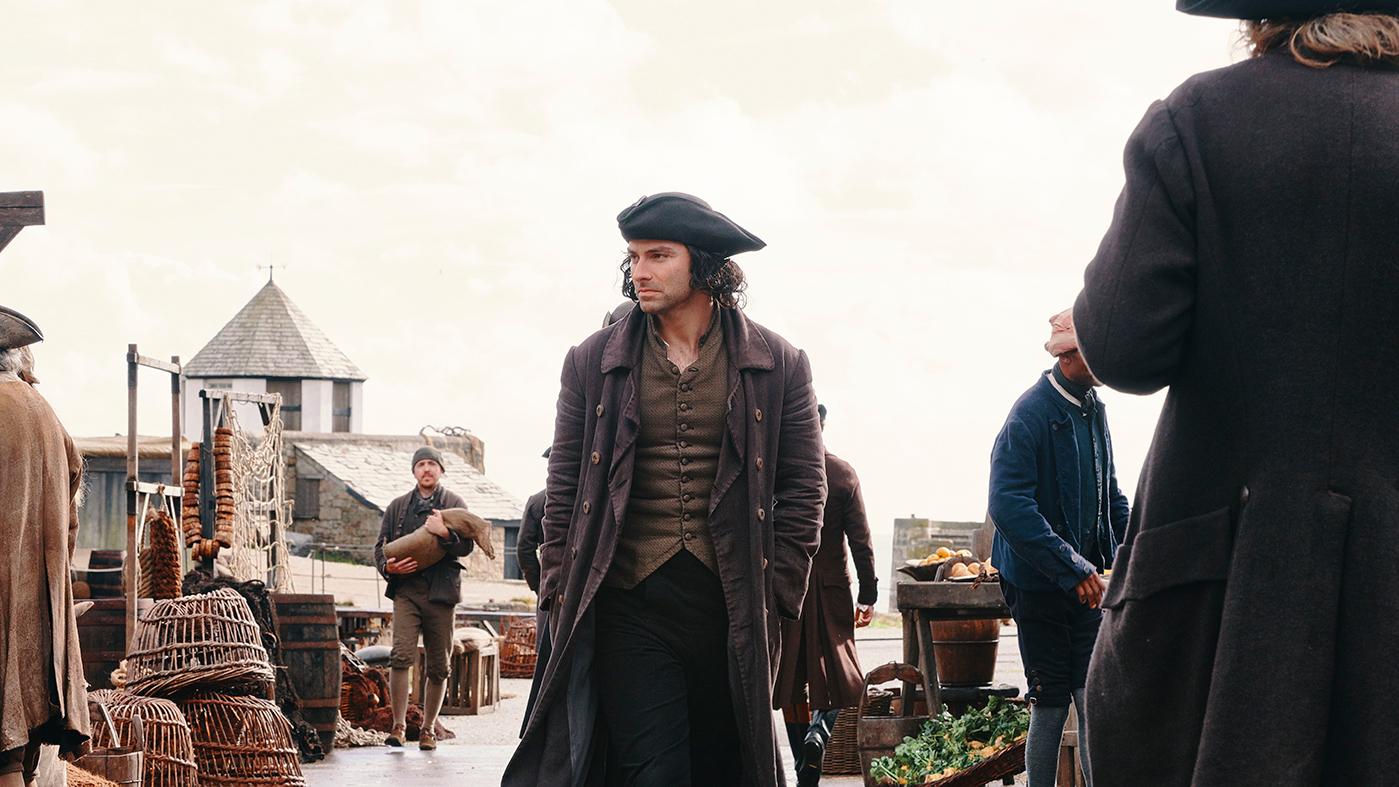 Ross is beginning to be wary of Ned as his friend's temper refuses to be tamped down. Photo: Mammoth Screen

Dwight pays a professional visit to Kitty, who tells him not to worry – she often suffers from “little malaises.” Later at home, Dwight tells Caroline he admires Kitty’s strength and fortitude. Caroline feels inadequate. “How can we compete?” she asks her pug Horace with a sigh, as Dwight receives a note from Cary summoning him to Trenwith, where he agrees take on George’s care “with the utmost discretion.” Dr. Penrose sought to break George; Dwight’s goal is to mend him…with a dose of reality.

Hanson, with Cecily, arrives at Trenwith for one more try at the mahogany partnership, but George is still mostly catatonic. Eyeing him, Cecily expresses sympathy for George’s grief. Cary acknowledges that George is sad, but will soon be taking a new wife. “Do you know the lady?” Cecily asks. “I do,” Hanson replies, looking at her meaningfully. She is taken aback.

At the pub, Tess is stirring up the disaffected regulars, and as Hanson listens in, Ned comments that sometimes you have to resort to violence for change to happen. Ross cautions Ned not to give her any ideas. After Ross and Ned leave and Tess bitterly disparages the Poldarks, Hanson buys Tess a drink and dangles some coins – she may be useful.

Cecily breaks it to Geoffrey Charles that she is soon to be married…to his hated stepfather George. Geoffrey Charles, predictably, is appalled: George cannot possibly love her. “What has love to do with anything?” she cries. “I love you,” he declares. Cecily, conflicted, departs in a fury.

To provide jobs for the starving miners, Ross decides to make an offer to buy the mine Wheal Plenty from George. Arriving at Trenwith, Dwight uneasily informs him that George is ill, so Ross makes his offer to Cary, who retorts that Ross can’t afford it. The next day, Ross’s banker Harris Pascoe is convulsed with laughter at Cary’s outrageous offer, telling him, “No sensible man would even consider it!” That leaves out Ross, obviously, who signs on the dotted line without consulting Demelza. Later, she is incredulous that he risked so much for others.

Dwight takes George for “tough love” visits to Elizabeth’s grave and to the bedroom where she died, and George painfully begins to accept his loss. Back at Killewarren, Caroline is miffed that Dwight won’t tell her where he’s been going and suspects he has fallen for Kitty. Smiling, Dwight slyly cites doctor-patient privilege, which does not reassure her. 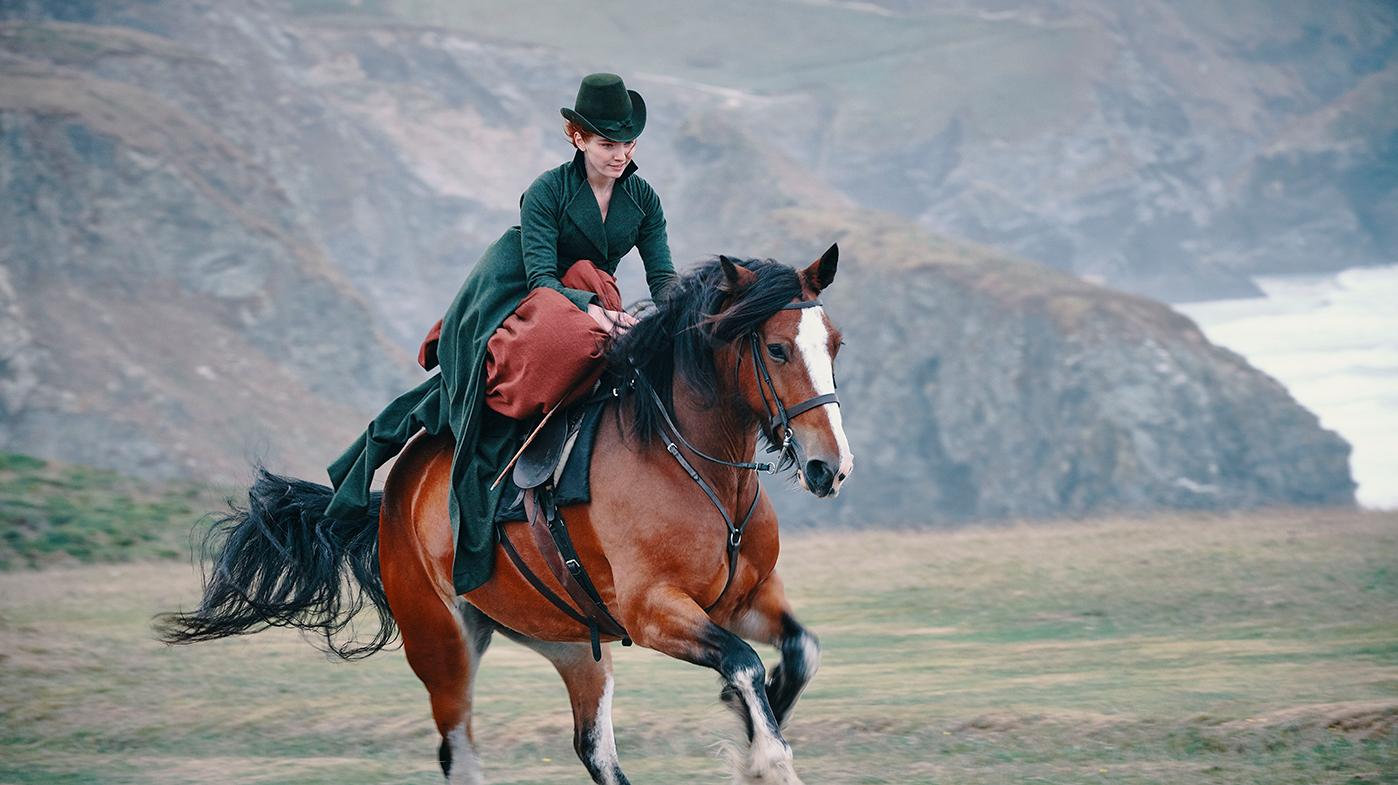 Demelza and Ross must once again save George from his own unpopularity. Photo: Mammoth Screen

Cecily, dreading her impending marriage, has questions for Demelza: what kind of man is George? And did she, Demelza, marry for love? “It’s the wisest thing I ever did,” Demelza tells her. Swayed, Cecily informs an elated Geoffrey Charles that they must elope.

On the quay, Hanson and Tess scheme – they will dupe the “firebrand” Ned into heading up a peasant revolt that will get him in trouble while sending George “scurrying back to London.” Two birds, one stone. Later, as Hanson smugly eavesdrops, Ned agrees to lead the mob but insists on a peaceful protest. “Of course,” promises Tess facetiously.

Riding on the cliffs, Ross encounters Valentine on his way to visit Nampara and takes him to Morwenna’s makeshift school instead. Valentine is unused to interacting with other children, and behaves badly. At Trenwith, George flies into a rage when Ross deposits Valentine back at the gate.

In town, Demelza is alarmed to come across a rabble, led by Tess and Ned, marching toward Trenwith. Ned assures Demelza that the villagers come in peace, but Demelza, no dummy, notices that some of them are armed. She gallops off to find Ross, and together they make haste for Trenwith, where Ned has broken down the front door, sending the mob pouring into the house. Ned tries to reason with a gun-toting George, who slips on the stairs and breaks his arm. Ross and Demelza mediate with both sides; at Ross’s urging, George reluctantly informs the workers that the mine will reopen and they will be reinstated. Some of the protestors are still for using their weapons, but Ned reminds them that they got what they came for and herds them out.

That night, as if nothing had happened, Tess is back at Nampara sampling the port. But Demelza and Prudie have finally had enough of her insolence. Tess is sacked and departs in anger. They haven’t seen the last of her.