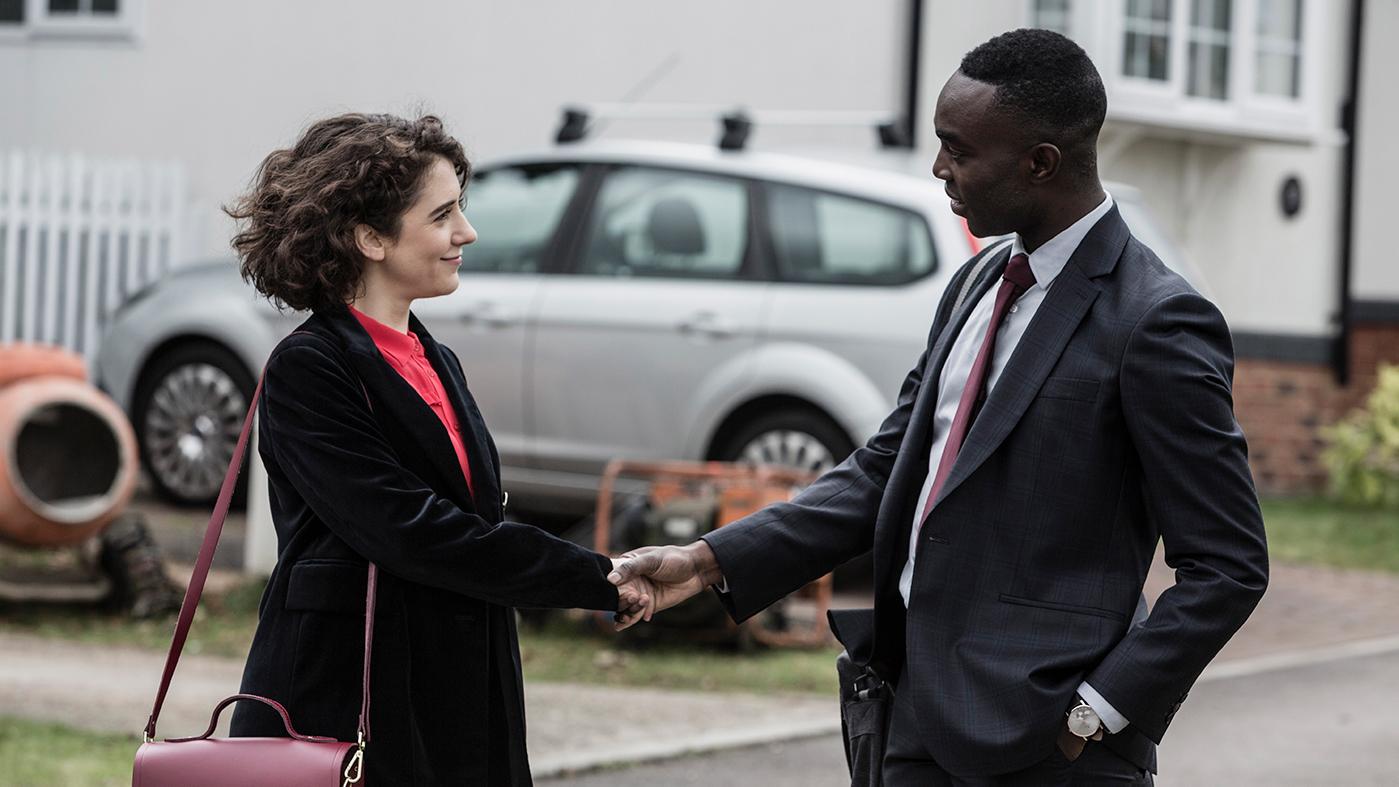 Leona and Ed try to trick each other so that they can win an interview for a story. Photo: Lookout Point / Gary Moyes

Four in the morning: Holly and Amina rush to the offices of the Herald, fearful that Chris, a veteran journalist reporting on terrorist groups in Somalia, is in danger. A call has come through from his phone with shouting in Arabic – but when Holly listens to it, she recognizes it as standard Arabic, which no one speaks except on TV. Eventually they hear a snore, and realize Chris fell asleep in front of a TV.

In her haste to get to the office, Holly dropped a couple pages at home relating to a case she’s working on. As Ed, her new flatmate, eats breakfast, he glimpses them and takes note of their contents before heading off to the Post. He tries to pitch as story without revealing his source, but is ignored since he has no corroboration.

The story is about the wealthy philanthropist Joshua West (Duncan plays poker with him, incidentally). Holly has received a lead from a woman named Rachel Gilmour that West slept with her when she was a young apprentice in one of his charitable programs. When Holly sends James to speak with Rachel, Rachel describes the relationship as predicated on the vast power imbalance between them. West eventually dropped the affair, giving Rachel money to start a business. It was common knowledge in the program that he had done this with other apprentices. Rachel is coming forward to encourage the others against whom West had used his power to his advantage.

Speaking of power, Duncan sets up a meeting with the Prime Minister in order to call in the favor he is owed – and he is not at all cowed. “I reckon we’re equal,” he tells the PM, before insisting on a photo shoot of the politician with his family and an exclusive feature, despite the PM’s desire to keep his family out of the spotlight. The PM finally agrees, only after asking Duncan not to investigate “resonance,” as the Herald is, if he gets a tip – it's a dumb mistake, telling Duncan about a secret project.

The Herald and Post are already fighting for a story. Both Leona and Ed have been sent to talk to people in the trailer park where a boy was killed. Ed convinces Leona there’s no one to talk to, then drives her to the train station before turning around to get the interviews himself – and finding Leona already there. Nonetheless, Ed convinces the subject to let him sit in on the interview with Leona. 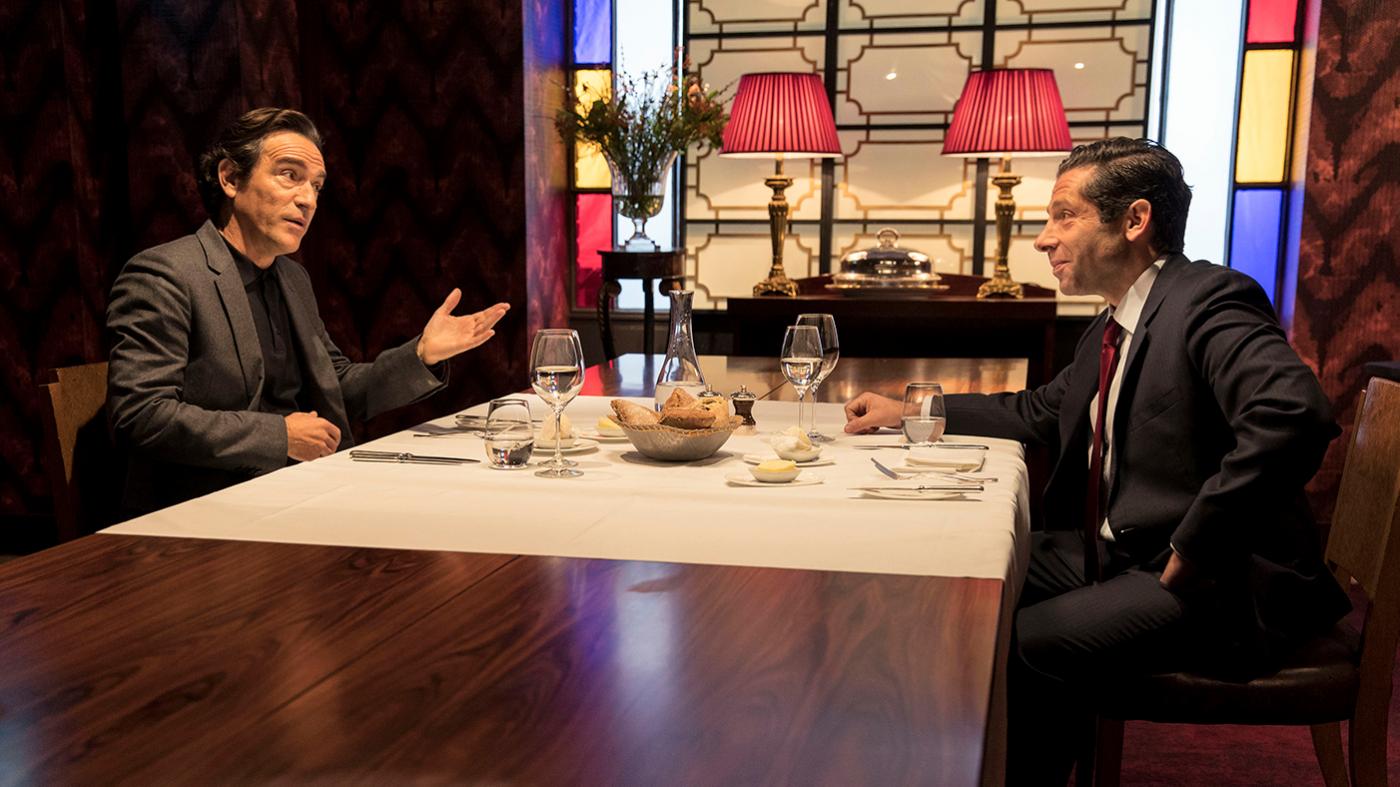 Duncan is not cowed by power: he tells the Prime MInister, "I reckon we're equal." Photo: Lookout Point / Colin Hutton

Ed’s ability to get front-page stories like that has endeared him to Duncan. Holly is also in Duncan’s good graces: he sends her a different gift every few days, and she sends each one back to him. He even ships her a Post ID with her name and photo.

But Holly has plenty to deal with at the Herald. While fact-checking Chris’s piece on Somalia, she notices an inconsistency: he says he talked to rebels the night she and Amina received the phone call of him sleeping. After receiving an odd answer from Chris’s companion about the timeline, she goes to Amina and says, “We were right.”

She’s then off with James to meet another woman Rachel Gilmour mentioned as someone West had slept with. Susannah Hill went through West’s apprentice program and later worked for him. She defends West, then admits – off the record – to having a relationship with him. It lasted four years, and West helped her with jobs and money throughout, until he decided it was over and he had done enough for her. The sex was sometimes rough, she says. But she doesn’t want to come forward and ruin her career – not unless the Herald will go against journalistic standards and pay her for her story.

Despite this setback, James and Holly convince Amina to run the article about West: they have stories from two women, one of whom is willing to put her name on it. They send off a note asking West for comment.

Amina knows the risks of investigative journalism, and the importance of uncovering the truth. So Chris’s fudging of the facts in his Somalia story has her angry and, most of all, disappointed. She looked up to Chris as a young journalist, and now she learns from him that this isn’t the only time he has blurred things for the sake of a more effective story. Now the Herald must admit this and audit all his stories from his distinguished 35-year career. “You were supposed to be our conscience,” Amina tells Chris.

As the deadline for the Post looms, Duncan tells Ed that his story that a man from the trailer park where the boy was killed is a “weirdo” doesn’t have enough substance: he needs someone to call the man a “pedophile.” Plus, that way he can run the photo shoot of the PM – which the PM already regrets – next to a story about a pedophile on the front page. Ed frantically makes some phone calls, and gets the prized word.

The Herald is putting Joshua West on their front page. They have not had a response from him or his lawyers, but the Herald is going to run the story. As the edition is sent off for printing, most of the team goes for a celebratory drink. By the time they leave the pub, Peter has missed the last train, so Amina offers him her couch. He refuses, but she tells him she’s not interested in him and he’s married, so nothing will happen. They get back to her house, and things happen. 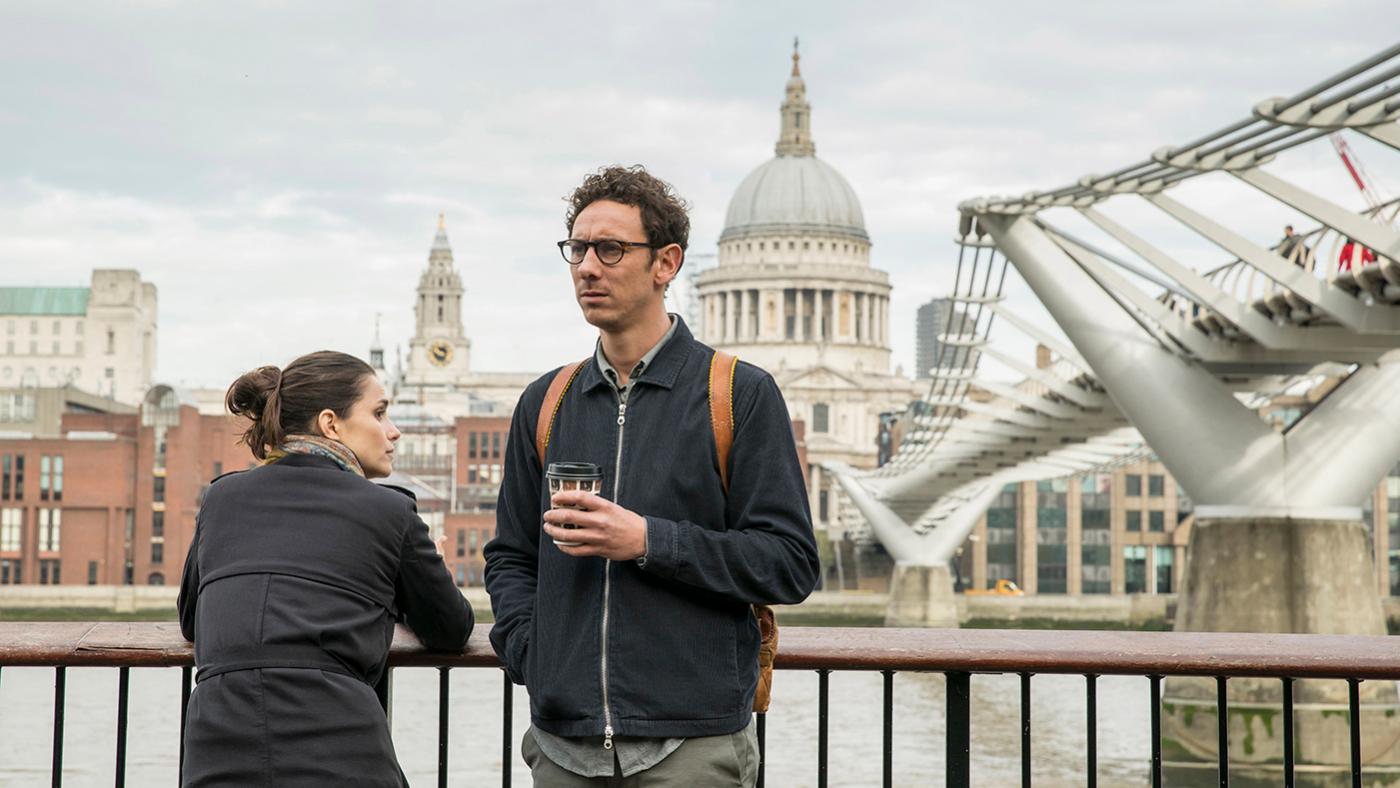 Holly and James are breaking a story on a wealthy philanthropist's sexual relationships with young women in one of his apprentice programs. Photo: Lookout Point / Colin Hutton

Amina and Peter are woken up in Amina’s bed by her phone, and then a knock at the door. West’s lawyers have finally responded, asking for a last-minute injunction on the story. The trucks delivering the morning papers have been pulled over, and the story hasn’t gone up online yet. Amina, Holly, and the Herald’s lawyer gather along with West’s lawyers in a church community room – it’s the middle of the night, so the judge would rather meet there than at his home, where his family is asleep.

The Herald argues that West had plenty of time to respond and that at this late point they would lose tons of money by pulping the already-printed paper. West’s lawyers say he will cover the lost costs and argue that his relationships weren’t illegal – all the women were at least 18 – and that the story would harm his reputation and family. The Herald argues the story is in the public interest, and if they have to go to court to fight for publication they will lose against West’s greater resources.

The judge lauds the right-mindedness of the Herald – and grants the injunction.

The story, however, is still out. The Post has run it, in a second edition, on the front page. Amina calls Duncan, furious. How’d he get the story? (Holly admits it’s her fault, Ed probably stole it.) The Post also violated journalistic standards: they paid Susannah Hill for her story, and didn’t contact West for comment before publishing. I’ll have to resign, Amina tells Duncan – pulping a paper like this is unprecedented. But what about the opera job you were just offered? Duncan asks – he suggested her to the opera as a great fit.

Amina hangs up. Off she goes to the Herald’s office. The board is waiting. They beckon her into a conference room without a word.