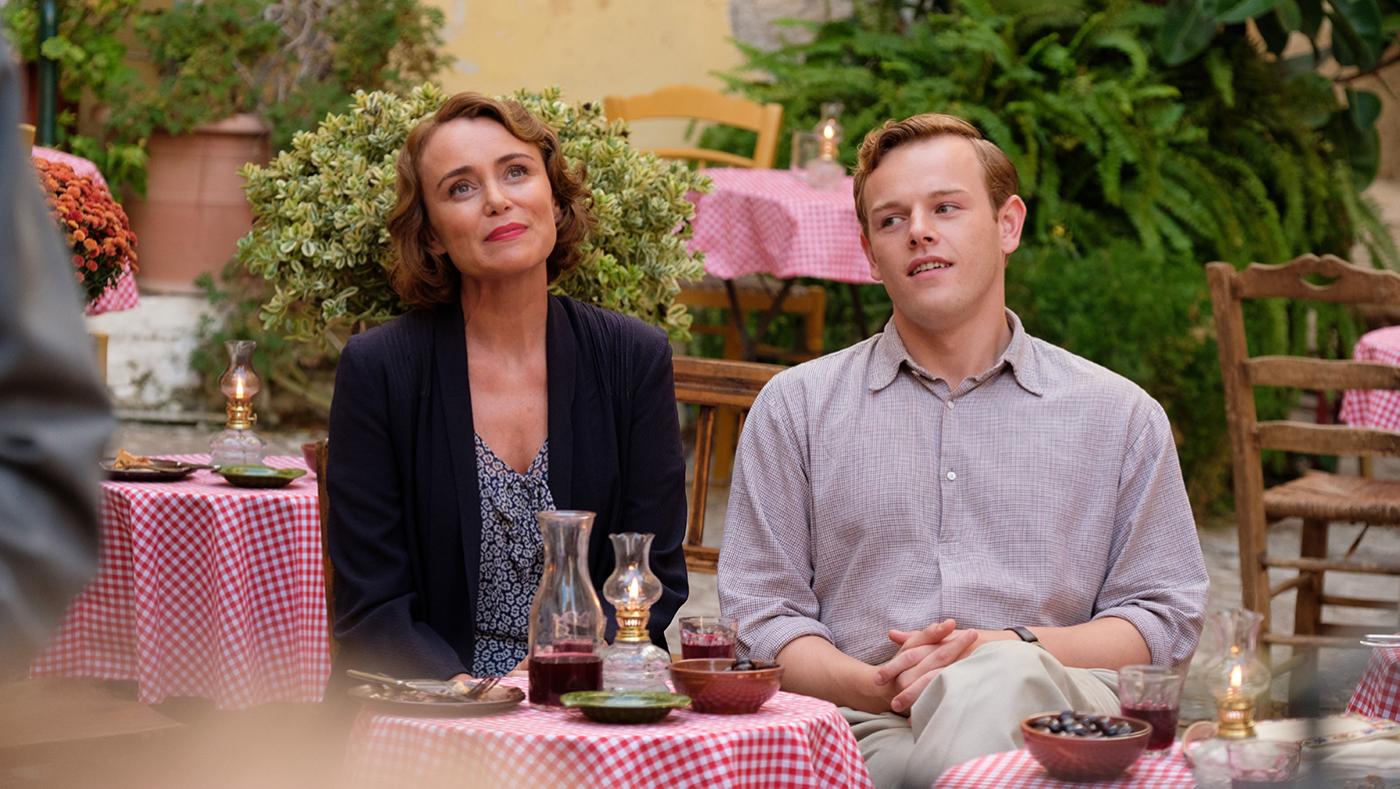 The Greek king is coming to Corfu, and the Durrells have volunteered to help organize the festivities. Photo: Sid Gentle Films 2019

The king of Greece is visiting Corfu, and since the Durrells are once again on good terms with the island’s natives, they have offered to help out with the preparations. Theo is on the welcoming committee, and despite some gaffes by Louisa and Leslie, they are assigned various tasks, since the king’s boat will be passing directly by their house. Louisa will bake festive treats for the people who gather there, while Leslie will take over the Boy Scouts from their retiring leader and organize a demonstration for the king.

The king isn’t the only one coming to Corfu: Margo is also making her way there by train from Paris. Her car contains people from all across Europe, and the political tensions of the time make their way into their interactions. By and large, however, everyone is friendly – except a chauvinistic young Greek who dislikes Brits.

Leslie has his own problem with an Anglophobic Greek in one of the boys in his scout troop, who says his parents prefer the Nazis. The boy wants a Greek troop leader, but Leslie wins over the rest of the boys with gifts. Theo forces him to adopt a simpler plan for the king’s demonstration than he had hoped, however. And Louisa, wanting her sons to like each other more, forces Leslie to include a reluctant Gerry in the troop.

Amidst all this travel towards Corfu, one departure is also being planned. Basil still refuses to end things with Dimitra – which is worrying, given that neither he nor Leslie is good at secrets and Spyros is happily living with the Durrells. But then Basil overhears Spyros telling Leslie about how his father cheated on his mother, so he promised her that he would never be like him and thus takes marriage very seriously. Basil decides it’s time to end the affair, and to return to England – after the king’s visit.

It’s about time, too: Louisa and Spyros are happier than ever, as is obvious when they spend a day baking together to prepare for the king’s arrival. The revelation of the affair could ruin things – and Louisa is catching on to Basil. She has heard that Dimitra’s affair is with a foreigner, and puts two and two together when she observes Basil’s recent blissful mood.

When she speaks to him about the affair, he tells her Dimitra believes she and Spyros are sleeping together and so felt justified. He also saves Leslie by not revealing his involvement.

Louisa has plenty else to keep her occupied until Basil leaves, as members of the royal advance party arrive to stay with her. Soon there are seventeen people in the house, and Gerry and Leslie are sleeping on the floor in her room. 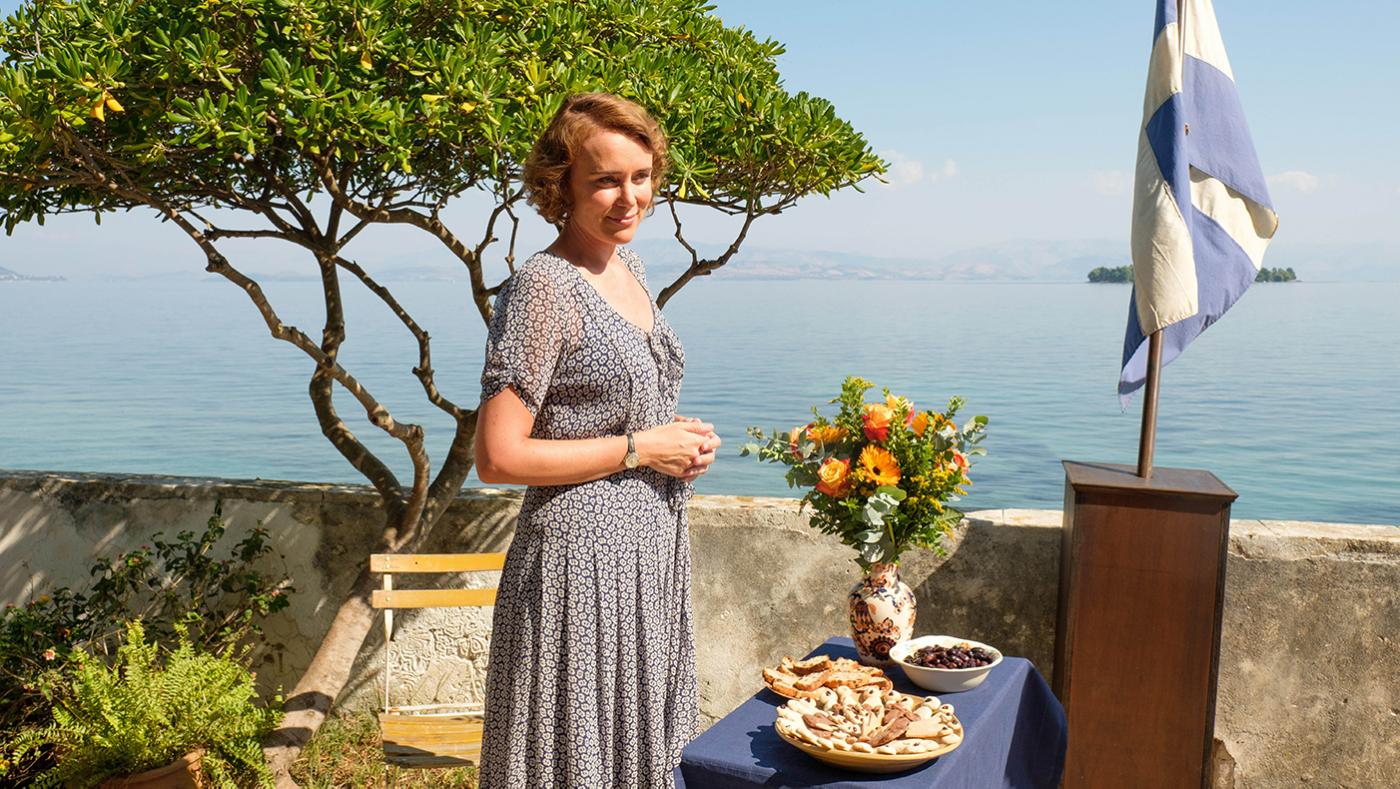 Louisa is growing ever happier with Spyros, spending a blissful day baking with him. Photo: Sid Gentle Films 2019

Gerry is doing his own preparation for the king’s visit. Apparently the king loves wildlife, so Theo has asked Gerry to organize a display of his animals; his zoo is ready to open. But he also must take part in Leslie’s scout troop – so when Leslie marches them all to the Durrells’ house to teach them knots, Gerry distracts them with the animals, a subject they much prefer. Leslie court-martials Gerry in return.

Margo’s train car has been steadily emptying out as it stops in different cities, soon leaving only her and the nationalistic Greek boy, who has kept any more riders from joining them by putting up a sign about contagion – he wanted to be alone with Margo. He’s been smitten since she sat down, and thought he was being interesting by being arrogant. Margo is confident she can tame him. They kiss.

Louisa, meanwhile, goes to visit Dimitra and tell her that she has never kissed Spyros. The two women commiserate about men; Dimitra says Basil is kind to her. She also reveals Leslie’s role in the affair, and Louisa eventually tells her to figure out her relationship with Spyros, now that Basil is leaving, so that they can all move on.

Later, Spyros walks into his house while Basil is there saying goodbye to Dimitra, but he suspects nothing – Basil says he is just dropping in on everyone before he leaves.

As everyone prepares for the arrival of the king, Leslie faces an insurrection by the rebellious boy in his troop. When the troop practices their routine for the crowd, they end with their flags organized into a swastika – and Leslie is furious.

There’s a more important last-minute change, though: the king is no longer sailing past the Durrells’ house. Everyone quickly abandons it, just in time for Margo to arrive – with her new boyfriend in tow.

As the day of festivities drags on – and still no one seems to know where the king is, not that anyone is concerned – Louisa tells Leslie that they should admit everything about the affair to Spyros. There has been far too much deception.

Gerry apologizes to Leslie for being a brat and asks Leslie to at least pretend to take an interest in his animals, since he cares about them so much. Leslie agrees.

That smoothed over, Louisa and Leslie tell Spyros that Dimitra was having an affair with Basil, and that Leslie helped push him into it. Unfortunately, Basil is still on Corfu, despite everyone thinking he had left, and chooses that very moment to appear. Spyros punches him, then turns to the Durrells, tells them he could never forgive them, and walks away.