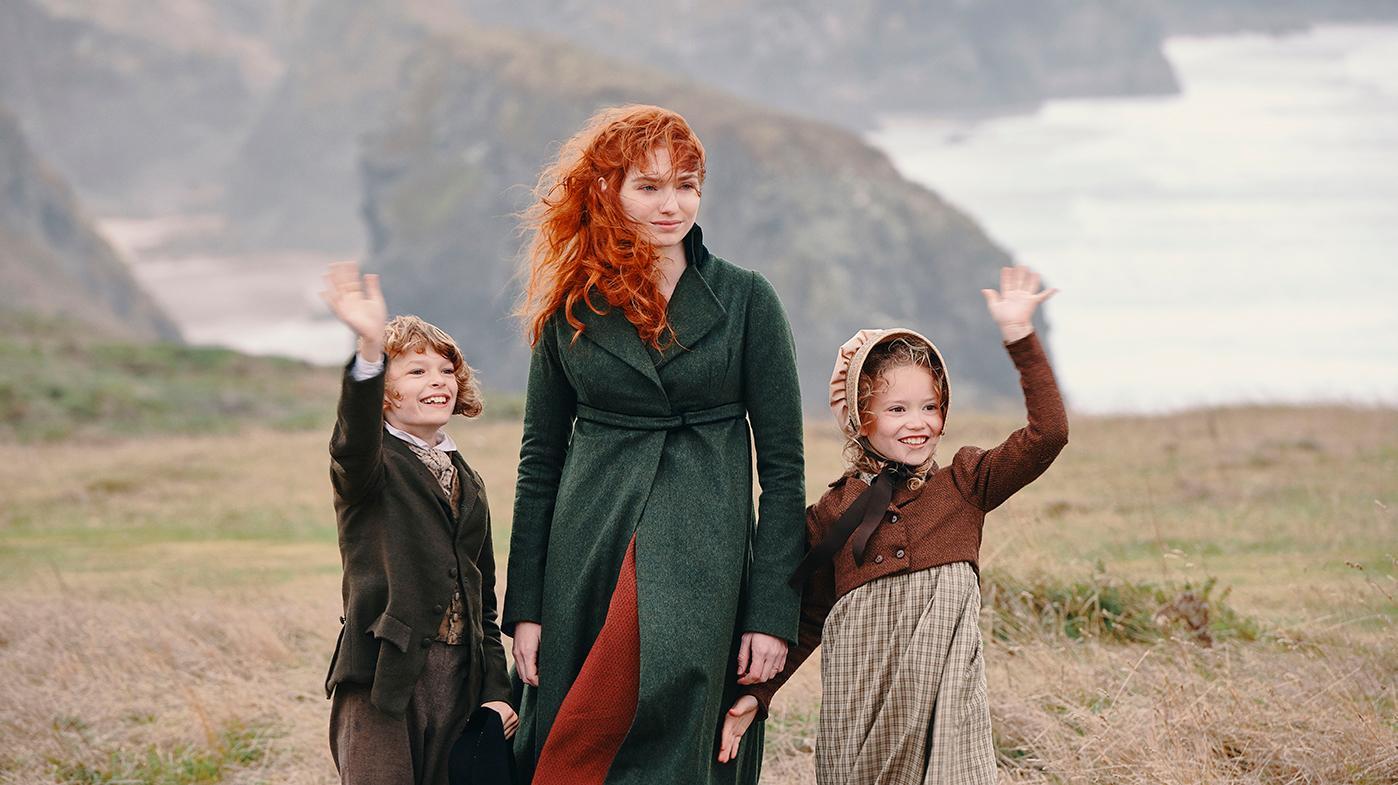 It’s Christmas, and the Poldarks are hosting a holiday gathering. Ned has outstayed his welcome – he’s become as much of a pariah in Cornwall as he was in London. Kitty is still unwell, Dwight is solicitous of her, and Caroline is conflicted.

Soon, Ross, Ned, and Kitty are enroute to London, with Dwight and Caroline at their heels – Dwight rightly thinks Ross needs backup. Ned and Ross ask Wickham to intercede with Prime Minister Pitt to have Ned reinstated in Honduras. Unfortunately, Pitt has resigned and can’t help.

In London, Hanson and his business partner, a man with a falcon whose face is obscured, discuss the importance of securing George and his money for the partnership. The Unknown Man thinks it’s time he met George himself.

Back in Cornwall, banker Harris Pascoe alerts Demelza that the scarcity of gold has forced the bank to issue watermarked paper notes instead. Demelza worries that their miners, accustomed to being paid in coins, won’t believe the notes are currency. And she’s right: Tess loudly accuses the Poldarks of fraud. Demelza suggests she read the notes to determine their authenticity, but reading is not in Tess’s skill set, and she urges the miners to go on strike. Later, it’s clear that Tess is perfectly aware that the notes are legit, and just to mess with the Poldarks, she and Jacka Hoblyn go into the counterfeit money racket.

Ned, Kitty, and Ross are strolling in Vauxhall Gardens where they are surprised to run into the Enyses. Dwight warns Ross that George is telling everyone that Ned broke into his house and caused his broken arm – assaulting a member of Parliament is a serious crime and Ross could be seen as complicit. Ross is adamant that the story is false and is sticking with Ned, of course.

Ross again pleads Ned’s case to magistrate Joseph Merceron, who is sympathetic but advises Ross to have a contingency plan. That same day, Hanson arrives at George’s London home with the falcon man – it’s none other than Merceron. Ross is being betrayed.

Dwight calls on George and Cary to see how George is faring emotionally. George, weirdly, has no recollection of either his trauma or its treatment. Cary pointedly denies it ever happened, and threatens to sue Dwight if the story ever becomes public. (No good deed goes unpunished.)

In Parliament, Ross argues for reform in the wake of a slave uprising in Haiti; the response is overwhelmingly positive. Meanwhile, Hanson and Merceron have received a letter from their new overseer – appalling working conditions are causing many slave deaths. Merceron tosses the letter carelessly away, and Cecily retrieves it. Later, to drive a wedge between her father and George, she gives the letter to Ross.

Morwenna is still spying on her son John Conan, and Drake on Morwenna. Finally, Drake comes clean to her: he would adopt the boy if allowed, and the next day, he pleads with the hardhearted Lady Whitworth to give him and Morwenna custody. Predictably, Lady Whitworth sets the servants on him, and Drake flees before they can call the constable. He vows revenge.

George, in response to Hanson’s entreaties, admits he is uncomfortable with the risks associated with slave labor. Hanson urges him, “as an influential member of Parliament” to give a speech justifying the practice. Meanwhile, Geoffrey Charles arrives to make an ill-timed request for Cecily’s hand in marriage. Hanson tosses him out and tells George of his stepson’s offer. George was lukewarm on the idea before, but now decides to marry Cecily out of spite. Later, Geoffrey Charles is expelled from the military academy on a trumped-up charge of theft. Coincidence? Hardly. With her wedding imminent, he and Cecily make plans to elope.

On the beach, Demelza comes upon an anxious Drake, watching Jeremy and Clowance playing with…John Conan? Drake has foolishly kidnapped the boy and Demelza is aghast – he must be returned to the vicarage, STAT. Fortunately, Drake manages to spirit him into the yard as a frantic Lady Whitworth and her searchers are looking the other way. Morwenna, incensed at the risk Drake took, realizes that she must break with John Conan forever. As she is tearfully saying farewell to the child, Lady Whitworth advances in a fury, but at Drake’s urging, she listens as Morwenna convinces the boy that his “kind and loving grandmother” will take good care of him. That night, Morwenna tells Drake that having grieved for the loss of her child, she is now ready to try for one of their own. (Cue Marvin Gaye!)

Sam and Demelza, counting their payroll, are alarmed to discover that many of the notes are lacking watermarks and are therefore worthless. Demelza determines that Tess and Jacka have been circulating the fakes, and that night in a crowded pub, she and Sam publicly threaten to turn over “whoever did this” to the authorities. Staring down the nervous culprits, Demelza informs them that “forgery is a hangin’ offense,” and boom! Tess and Jacka are ex-counterfeiters.

In Parliament, everyone looks on as George, having severely misread his audience, gives an overtly racist and poorly received speech that is movingly rebutted by Ross, who reads aloud portions of Cecily’s stolen letter and advocates for Ned to be restored to his position in Honduras. There are universal roars of approval, and later, George blames Ross – not Hanson’s bad advice – for the disaster. George, Hanson, and Merceron scheme to get even with Ross and Ned by planting a treasonous “Catholic emancipation” oath either on them or in their lodgings.

At a public reception, a drunken Ned is loudly spewing anti-Crown rhetoric; Kitty can’t restrain him and Dwight is officially DONE: Ned’s recklessness is imperiling all of them. Ross accuses Dwight of being jealous of his friendship with Ned: after all, Ross says, “he saved my life on the battlefield.” Icily, Dwight points out that Ned merely conveyed Ross to Dwight’s operating table, where “the lifesaving portion fell to someone else.” Noses in the air, Dwight and Caroline walk out on him. Burn!

At a nearby pub as Ross and Kitty watch uncomfortably, Ned continues drinking with some new acquaintances who egg him into more seditious talk. Under the table, one of them makes several attempts to slip a document – the bogus “Catholic emancipation” oath – into Ned’s coat pocket, finally succeeding. As Ned’s sloppy outbursts escalate, Ross attempts to extract his friend from the situation, getting a punch in the mouth for his trouble. Kitty, mortified, tells Ross that there’s nothing to be done until Ned sobers up, and wiping the blood from his face, Ross leaves. Suddenly, the inn is raided by officers of the Crown, and in the melée, the oath falls harmlessly from Ned’s pocket. He is arrested anyway, over Kitty’s protests.

Dwight and Caroline, having had misgivings about their quarrel with Ross, double back to their friend’s lodgings just in time to surreptitiously observe some shady officials gaining entry. After the men leave, the couple search Ross’s flat, guessing that something incriminating must have been planted there – namely the forged “Catholic emancipation” oath, which Dwight discovers under the mattress. Right on cue, the officers reappear and as Dwight and Caroline watch, ransack the place. They are baffled to find nothing, and imperiously, Caroline forces their leader to sign a paper confirming it. “You were magnificent,” Dwight tells her admiringly. Naturally, Caroline concurs. (Get these two a spinoff!)

Over drinks later, Ross admits to his friends that he was “blinkered” to Ned’s faults, but has now seen the light: Ned and Kitty must be gotten out of London, forthwith. But it’s too late: Kitty bursts in, sobbing, with the news that Ned is right back where he started…in jail, this time charged with high treason. And this time, if Ned falls, he takes Ross with him.