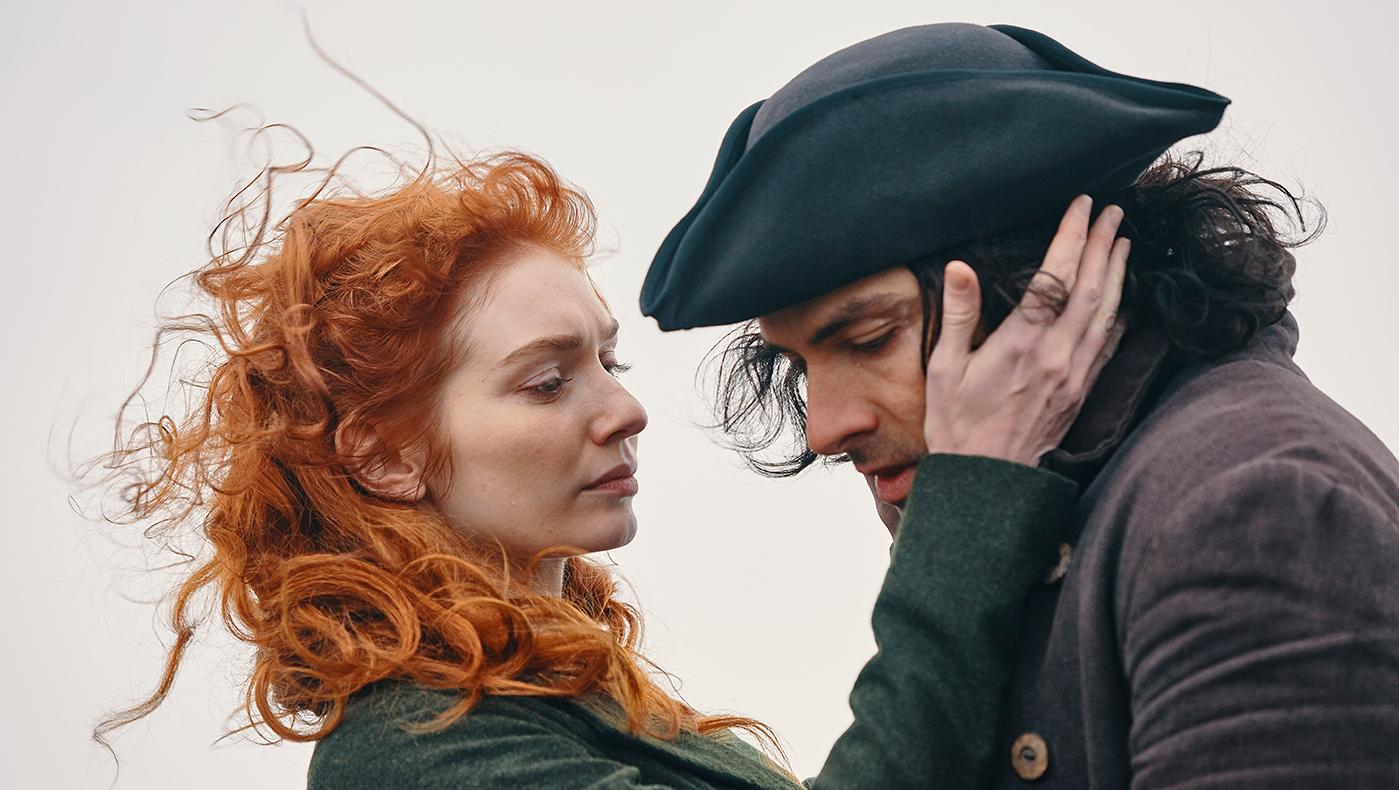 We open on a cliff’s edge in Cornwall. As the gathered villagers watch, Demelza lays the cornerstone for the new school on land, she tells them, that was donated by Ross. (A school on a cliff? Okay.)

In Parliament, Ross is valiantly attempting to rally his fellow members to Ned’s defense, while also pleading his case to Wickham, who points out that Ned has no one to blame but himself. Wickham orders Ross to “detach” from Ned for his own safety. Will Ross listen? (Three guesses, and two of them don’t count.)

Cut to George and Cary in Vauxhall Gardens, where George’s racist speech hasn’t won him any popularity contests. Ironically, George couldn’t care less about slavery – he was only following Hanson’s advice. Asked about wedding Cecily, George is all for it on a strategic basis – “the girl is incidental.”

Meanwhile, “the girl” in question tries to make a case for Geoffrey Charles to her father, but it is clear that marriage to George is non-negotiable. George’s spies tell him that Cecily and his “brat of a stepson” are still seeing each other. George is fine with it: “the pain will be all the keener when they come to be parted.”

Demelza is rushing to get the children ready for Morwenna’s school when Zacky Martin appears with troubling news: someone is stealing the mine’s ore, and it’s almost certainly an inside job. Later, Demelza observes Jacka Hoblyn on a furtive mission somewhere. She trails him to the beach and watches as he and others load heavy sacks onto boats. It looks fishy, but she, Zacky, and Drake agree to monitor the situation before accusing anyone.

Meanwhile, Morwenna isn’t rushing anywhere – she has very much overcome her fear of marital relations with Drake, who is entirely supportive – they may never come up for air. (Send provisions.)

At the jail, Ned has at long last seen the error of his ways: he “should have played the game…kept [his] head down and [his] mouth shut.” Ross vows he will get him freed.

George and Cary discuss Ned’s upcoming trial, which is sure to be a farce – Merceron is calling witnesses and selecting jurors who will be overwhelmingly sympathetic to the Crown. Still in the dark about Merceron’s collusion with his enemies, Ross asks for his help, but doesn’t get much encouragement.

Demelza notices the upturn in Drake and Morwenna’s relationship, and is pleased to see Sam stepping out with Rosina as Tess watches nearby, the wheels turning in her head. Later that day, Tess approaches Sam (who is all about saving souls) to inquire, dripping with false piety, if he thinks a “sinner” like her could be saved, and could he teach her how? Linking arms with him, she draws him away. Drake (who, like Demelza, is firmly on Team Rosina) watches suspiciously. 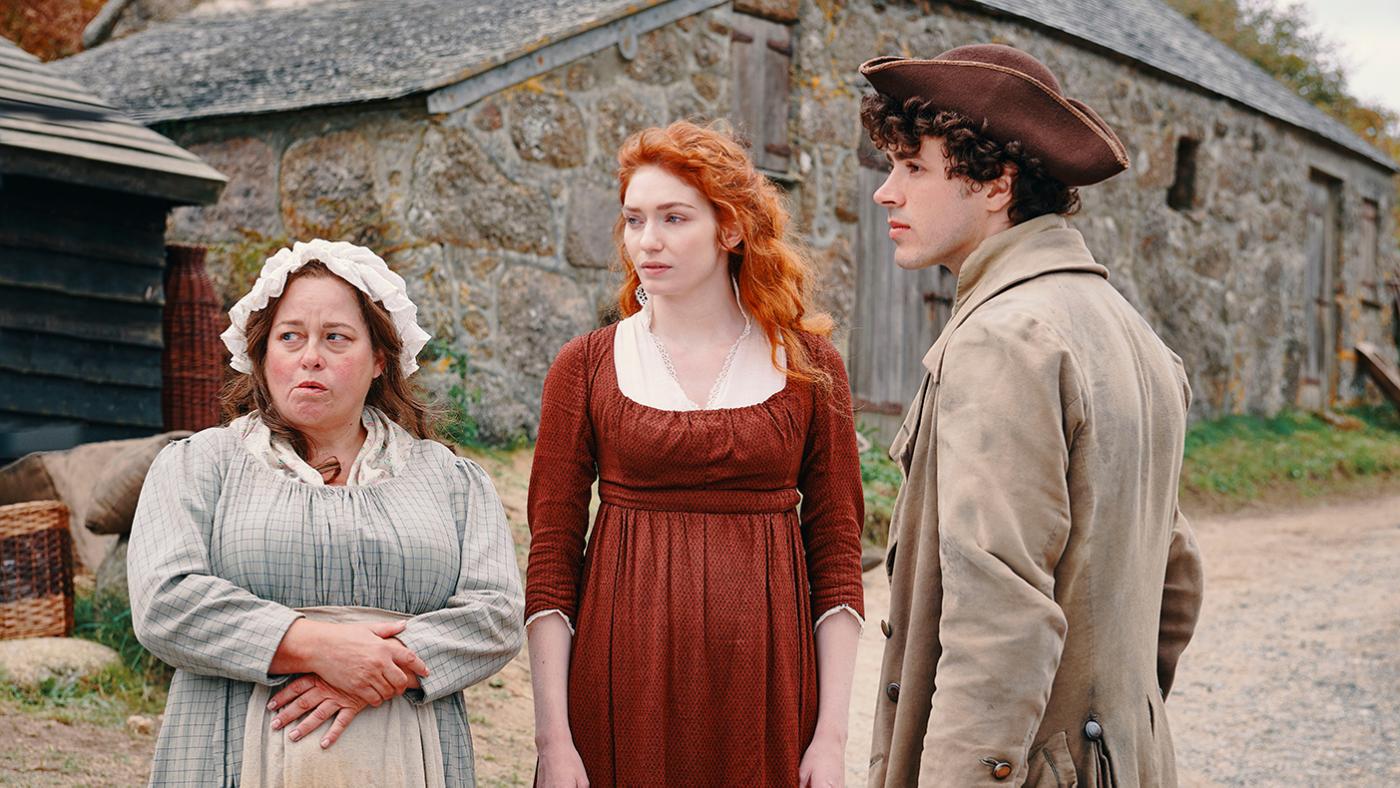 Demelza and Drake try to help their brother Sam in love and also uncover a conspiracy. Photo: Mammoth Screen

Cecily learns that her wedding to George will take place in two days’ time. She gets a message to Geoffrey Charles, who arranges for them to elope that night to Gretna Green.

Ned’s “trial” commences with the usual suspects, pro- and anti-Ned, watching from the gallery. The prosecutor accuses Ned of planning an entirely fictional assassination plot against the King, and the witnesses – none of whom Ross or Ned has ever seen before – have been bribed to share outlandish falsehoods about Ned’s “treachery.” Ned insists on testifying in his own defense, but Ross takes the stand and tries to sell Ned as a hero and a patriot. Dwight is also called, and in a “Hail Mary” maneuver, attempts to paint Ned as brain-damaged and delusional. This does not sit well with Ned or Kitty, but will it save him as it did Hadfield? Not this time: the jury deliberates for less than ten minutes and delivers a guilty verdict. Ned is sentenced to be hanged (but not until he is dead), then disemboweled, beheaded, and quartered. Understandably, Kitty faints.

That night, Dwight is flabbergasted when Ross suggests they team up to break Ned out of jail; Ross is always watched, but as a physician Dwight could get them access. It’s a mad scheme, but Caroline thinks Dwight owes Ross: remember that time when Ross rescued him from that French prison? Dwight, exasperated, thinks they’re both insane, but reluctantly goes along with the plan to keep Ross from getting into any more trouble.

That night, Dwight and his cloaked “assistant” bribe a guard to let them into Ned’s cell and leave the door open. Ned is astonished, and Ross forces Dwight to leave before the escape. As Ross and Ned are sneaking out of the prison, Ned has second thoughts – once he comes up missing, Ross and his family will be the Crown’s first targets. “Leave me here, and finish what I could not,” Ned tells him, nobly. Sorrowfully, Ross does.

Geoffrey Charles and Cecily are in a coach enroute to Gretna Green when Cecily asks, slyly, if they will be stopping along the way. Catching her meaning, Geoffrey Charles assures her that they will not be sleeping together until after they’re married. As they’re contemplating that, the coach lurches to a stop and harsh male voices are heard. They have been discovered.

The next morning, the day of Ned’s execution, Ned and Kitty review his will, and Kitty reveals she is pregnant (who didn’t see that coming?). They break down in happy tears over the “gift” he is leaving her.

Geoffrey Charles, obviously roughed up, arrives at the church with Cecily, “escorted” by two guards. Confronted by Hanson, each tries to take the blame for the elopement plan, but Hanson roughly hauls his daughter up to the altar, where George and Cary are waiting. George is delighted that his hated stepson will be forced to witness the wedding of “his future stepmother.” Not to be outdone, Geoffrey Charles cruelly informs George that his mother Elizabeth loved only one man, and it wasn’t his father Francis or George. Nice try – the ceremony commences anyway, but Cecily interjects, lying that she “gave herself, body and soul” to Geoffrey Charles. And, as Geoffrey Charles points out, George will never know if any child she carries will be his or another man’s. Having been there, done that, George turns on his heel and leaves. Afterward, an enraged Hanson locks Cecily in her room – they are returning to Honduras.

In the public square, a crowd of several thousand, including Ross, Kitty, Dwight, and Caroline, is on hand to witness Ned’s execution. Ned, commendably calm, gives an impassioned speech. As he stands on the block with the noose around his neck, a message arrives from the Prime Minister. Is it a reprieve? Not exactly: Ned will not after all be disemboweled, beheaded, and quartered. He will, however, be hanged…

…and forthwith, he is. As the shaken onlookers disperse, Kitty is inconsolable and Ross only slightly less so.

Cary and George arrive home after the aborted wedding ceremony. Cary tries to look at the bright side – George “had a narrow escape” and a “more pliable female” would be a better choice next time. “There will be no other female!” George snaps.

At the prison, Ross is packing up Ned’s belongings when Merceron arrives —his duplicitous role in Ned’s downfall is now revealed and Ross, devastated, realizes he has been played. Upon his return to Cornwall and Demelza, he breaks the news to her of Ned’s death. At the cliff’s edge, she tries to comfort him and then departs for home, giving him time alone to grieve.

There is a sudden sharp blow to Ross’s head and everything goes black. Cut to Ross lying unconscious at the bottom of a deep, dark ravine, as a disembodied male voice intones, “Compliments of Mr. Merceron.”