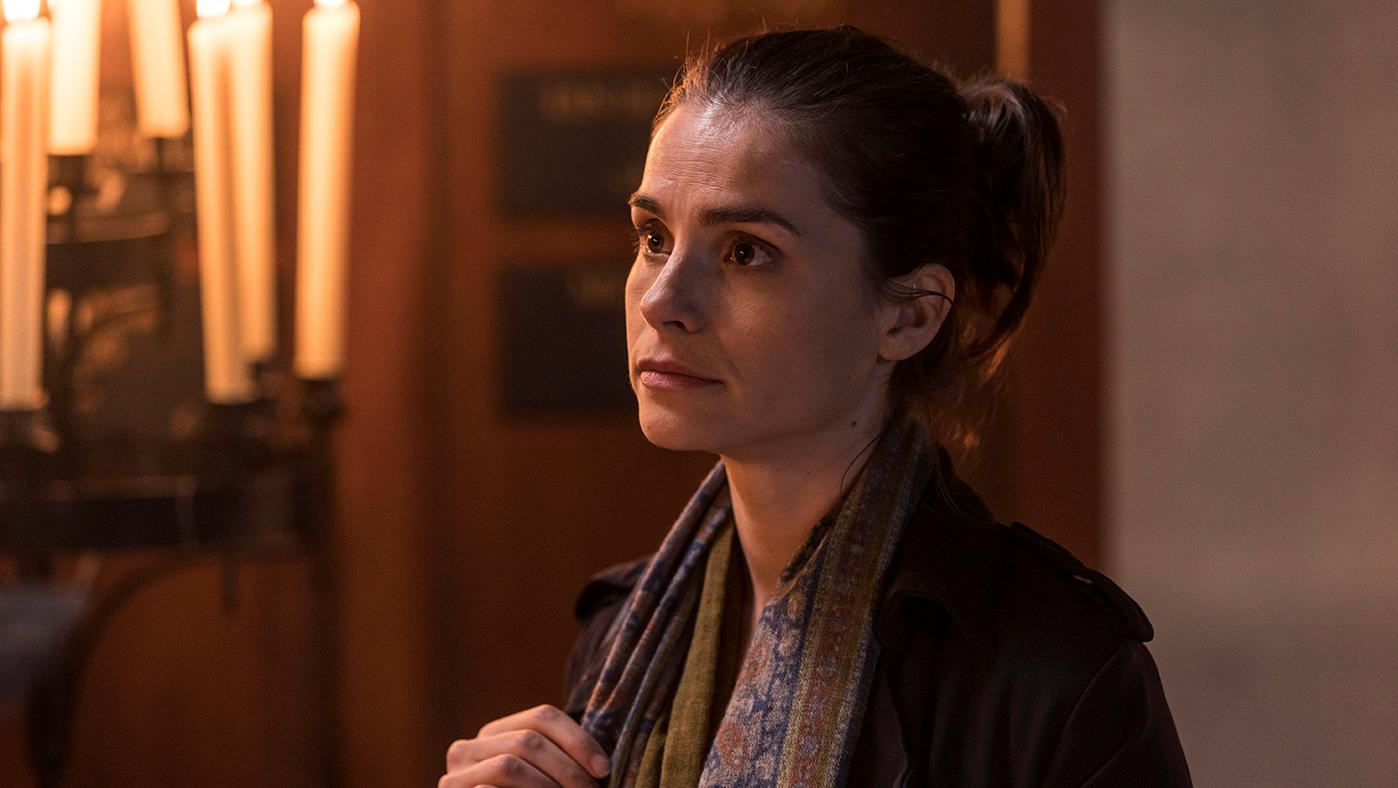 Holly is writing a takedown of Duncan and his cynical journalism at the Post. Photo: Lookout Point / Colin Hutton

Press is available to stream. Recap the previous episode or the rest of the series.

Duncan was on top of the world, at least professionally. He had gotten Holly, the Herald’s top journalist, to defect, and the Post was riding a high after breaking the story of a wealthy philanthropist’s abuse of power for sex. But things change quickly in the media world. The Herald’s switch to a free print newspaper has eaten into the Post’s sales. And Holly is back at the Herald, working on a story about Duncan, unbeknownst to him. The working headline is “Duncan Allen: Britain’s most hateful man?”

Duncan’s personal life was already a mess, and it’s getting messier. He only gets to spend two hours a week with his son, Fred, time that is supervised and timed down to the minute by his ex-wife. Her new partner is a billionaire who promises to retain the best lawyers and ensure that Duncan never sees Fred again. To add insult to injury, Duncan is picked up by a cab advertising the Herald when he leaves Fred.

He and his paper are also failing to learn anything about “resonance,” a secret government project, whereas the Herald is moving forward with a story thanks to the participation of a whistleblower. George Emmerson, the owner of the Post, asks Duncan to stop the Herald from publishing that story – Emmerson is supporting the Prime Minister’s re-election. Little does Emmerson know that Duncan has Ed trying to dig up information on resonance, not that he has been successful – Duncan and Ed don’t even know what resonance is.

The Herald, on the other hand, now knows all about it. Their whistleblower has explained the program to them: it’s a five-month-old project that allows the government to tap into the cameras and microphones on any civilian’s smart device; they listen for keywords in order to combat terrorism. The whistleblower could go to prison for revealing this, and will probably have to leave the country if the Herald goes public, so they’re doing all they can to protect him until the story is published: he’s in a hotel room that is watched at all hours, and no batteries are allowed in any device in the room.

The Herald has received a “do not publish” notice from a government committee, and Peter and James agree with it. If resonance helps to counter terrorism, maybe the program is worthwhile – and there is an overriding sense of fear in the world right now, so the public might support it. One of James’s cousins was at a recent bombing, so the subject is personal. Because of James’s doubts, Holly takes on the story, and Leona and Amina both defend it – exposing stories like these is the purpose of the Herald.

Meanwhile, Holly continues to work on her piece about Duncan. She asks to meet him at a church, choosing the location because it’s where his journalistic mentor is memorialized. He takes the chance to try to convince her not to run the resonance story, but she instead begins asking him personal questions before revealing that she’s writing a takedown of him – and has been recording their conversation. His reply? “I dare you.”

Insouciance notwithstanding, Duncan is nervous about the effect the story could have on Fred. He goes to his ex-wife’s home in the pouring rain to tell her about the story, asking her to warn Fred. She makes him tell Fred himself, and forces him to admit that the allegations – that he’s seeing a prostitute, that he’s a bully – are true. Fred walks away dejected; Duncan’s ex-wife says this will only strengthen her case in court.

Holly is planning on not only revealing Duncan’s relationship with the prostitute – she also meets with her to get quotes. But the woman is somewhat defensive of Duncan, sensing Holly’s anger at Duncan and asking why she’s writing the story. Holly replies that it’s to avenge the bully whom Duncan drove to suicide via his relentless, demonizing coverage.

The woman herself is frustrated with Duncan, however: when she returns to his apartment that night, she tells him that this story will damage her, too. He apologizes, telling her that he will have to say in public that the relationship was a mistake, and they will have to end it – unless he stopped paying her and they just continued on in a more typical relationship. He desperately asks her if it hasn’t evolved into something more than a paid relationship. She packs up her clothes and leaves the apartment with all her stuff, which answers Duncan’s question. 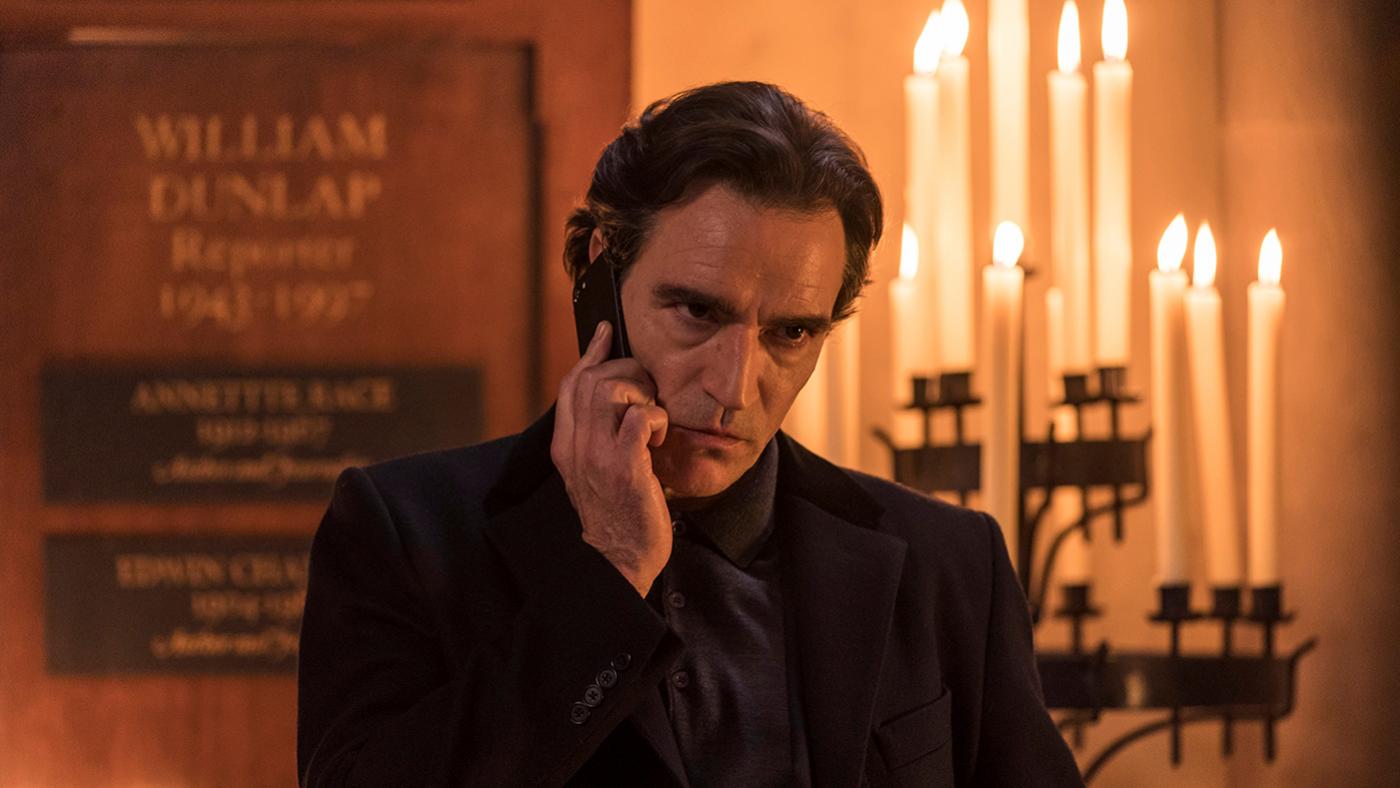 Duncan was on top of the world, professionally, but now his whole life is crumbling. Photo: Lookout Point / Colin Hutton

Duncan has lost everything personally, and soon he might lose his job, too: Emmerson warns him that, with the Post’s declining sales, he will be fired unless he prevents the Herald from printing their story on resonance. But, if he does stop the publication, he’ll get a promotion and a huge salary increase – enough to retain the very best lawyers in the fight over custody of Fred.

Finally, Duncan catches a lucky break. Leona runs into Ed at a pub and buys him a drink. He has a bad reputation amongst journalists, but the Herald is looking for a writer who can grab readers’ attentions, and she thinks there might be some good in him. When she goes to the bathroom, however, he proves her wrong: he rifles through her purse, discovering a note from Holly about the whistleblower and a hotel keycard. She returns and he quickly excuses himself to go get some work done.

Now it’s Duncan’s turn to set up a meeting with Holly at the same church. She has just reassured the whistleblower after a period of momentary doubt, and he will soon be ushered out of the country.

Looking at the memorial for Duncan’s mentor, Holly brings up Duncan’s early career as a reporter, when he practiced less cynical journalism. She tells him that this is his chance to keep his reputation intact, if only for Fred, if he still believes in the good their profession can do. She leaves, trusting that he will do the right thing.

And she’s right. The whistleblower escapes to the airport. Duncan returns to his office and asks his editors to run a story critical of the government, and begins packing up his things.

Holly tells Amina she has decided not to write a story about Duncan – it didn’t work out.

And all seems well – until Fred calls Duncan. His new mom’s boyfriend won’t let him speak to Duncan, but Fred snuck a phone to call Duncan. He hates his life now, he’s afraid his mom will move him to America, and he misses Duncan. Duncan promises to help. He hangs up, emerges from his office, and tells his editors, “change of plan.”

Holly is woken up by a buzzer early the next morning: a gaggle of reporters is outside her door. James comes to whisk her away to the offices of the Herald – Duncan has run a front-page story calling her an “enemy of the people” for running the resonance story.

Duncan sends a copy of the Post to his ex-wife’s new partner, with a note to check the first letters of every paragraph: a message spells out, “Lawyer Up.” Emmerson has rewarded him with the promotion. Before a press conference announcing it, Duncan introduces Emmerson to Ed, his star reporter. But Ed has another idea: he quits, and Duncan angrily bans him from ever coming back. This is a career-ending mistake, he warns.

Ed ran into Leona again; she realized that he went through her stuff (the cards in her wallet were rearranged), and tells him that she was wrong about him. No one in journalism will ever trust him again. Thus Ed’s drastic decision.

While Duncan steps up to the podium at the press conference heralding him to defend the cynical practices of the Post, Holly holds her own conference. While Duncan praises entertainment and getting the story at any cost, Holly defends free speech and journalism as a higher calling.

It’s a battle with which anyone living today is all too familiar.