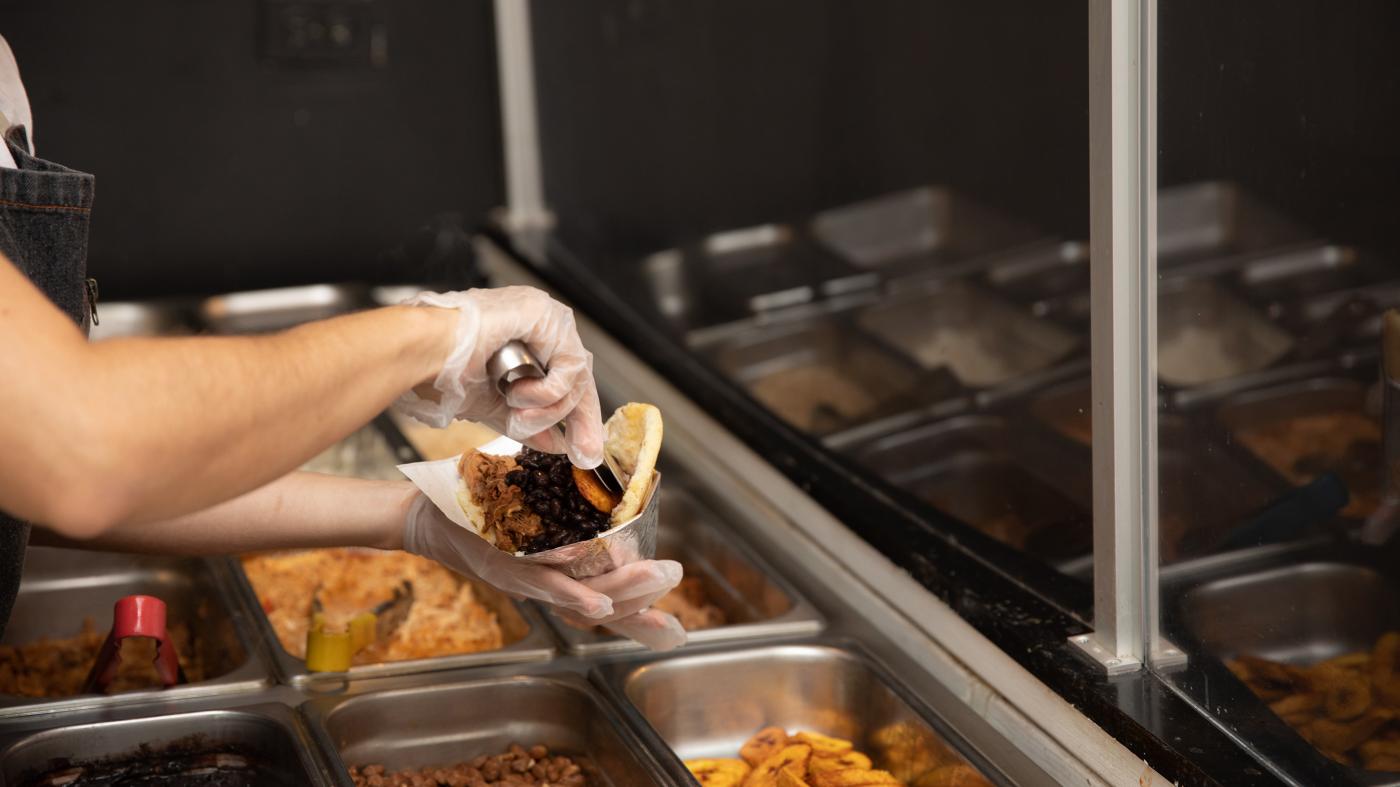 Find stories about some of Sweet Pepper Venezuelan Food Bar's neighboring restaurants and information about a food tour at wttw.com/nopassportrequired.

Andrea Andrade and Jose Navea never expected to make a life in Chicago. They came to visit Andrade’s younger brother, who had wound up here after falling in love with an American woman in Venezuela and following her back to Chicago. His solo trip from Venezuela to Chicago, when he was eighteen or nineteen years old, marked his first airplane flights. Like his sister when she arrived with Navea in September, 2015, he didn’t speak much English. “He’s a loopy guy,” Andrade says with a fond smile.

But she and her husband Navea eventually decided, like him, to stay. “We came here to visit, and then we decided we can’t go back,” says Navea. Since 2013, Venezuela has been in crisis, beginning with food and medicine shortages that have been followed by hyperinflation, skyrocketing street crime—including kidnappings and murder—and reported political persecution and abuses carried out by the military. Andrade and Navea are among an estimated 4.5 million Venezuelans who have left the country in “the largest exodus in South American history,” according to the U.N. Most, including Navea’s family, have gone to other countries in South America, but a large number have also sought refuge in the United States: in the most recent U.S. Citizenship and Immigration Services data available, from March 2019, Venezuelans ranked first in asylum applications.

The young couple had just $18 in their pocket when they decided to stay in Chicago. Four years later, they operate their own restaurant, Sweet Pepper Venezuelan Food Bar (2604 W. Lawrence Avenue in Chicago's Lincoln Square neighborhood), selling a dish that they say encapsulates their home country. “When you say, ‘What makes you feel Venezuelan, talking about food,’ arepa would be the first answer,” says Navea. “You can’t say Venezuela and not say arepas.” 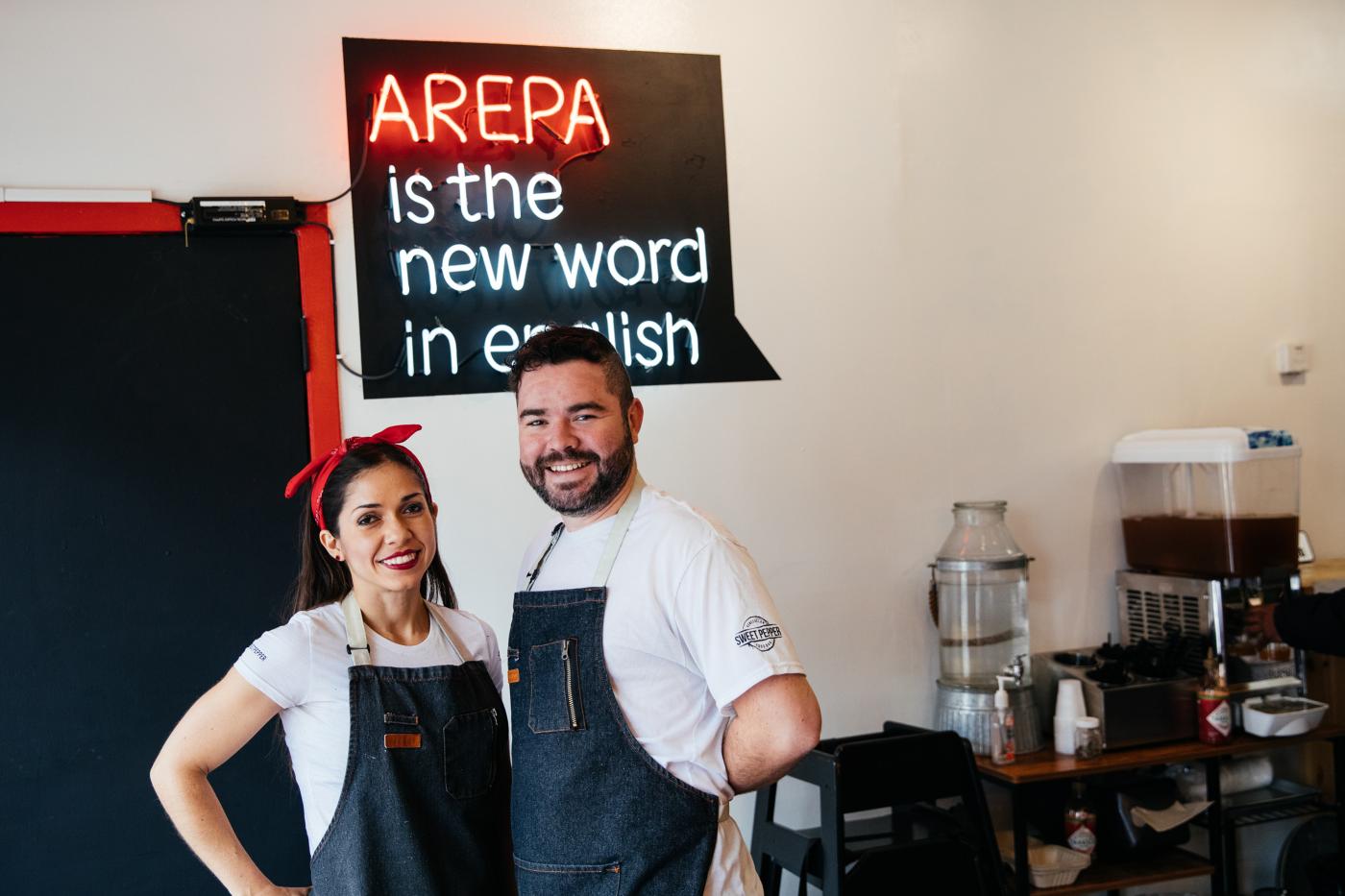 Andrade and her husband Jose Navea in their restaurant. Photo: Sandy Noto for WTTW

An arepa is a flat, circular pancake made of cornmeal that, in Venezuela, is typically griddled and then split open and stuffed with meats, beans, cheeses, plantains, eggs, or other fillings. Also found in neighboring Colombia, it is a staple in both countries. “When you ask how often we eat them,” Navea says, laughing, “I would say like every six hours. That’s for breakfast and then for dinner, every day.” When WTTW’s photographer arrived at Sweet Pepper to take pictures for this story, her Venezuelan rideshare driver was excited to find another place for arepas in Chicago, and spontaneously stopped in for lunch.

Andrade, who prepares most of the food at Sweet Pepper, says the recipe for their arepas is simple: a precooked cornmeal called masarepa, water, and salt. “And love,” adds the affable Navea with a laugh. Unlike masa, the corn mixture used for tortillas and other Mexican specialties, masarepa is not treated with lime (a process called nixtamalization).

“We want to make arepa a new word in English,” Andrade explains, as a neon sign in their counter-service restaurant proclaims.

“The same way you think about burritos or tacos or pizza, how you think of them as like an American thing: we want to do the same thing with arepas,” Navea continues. “It is yours as well.” 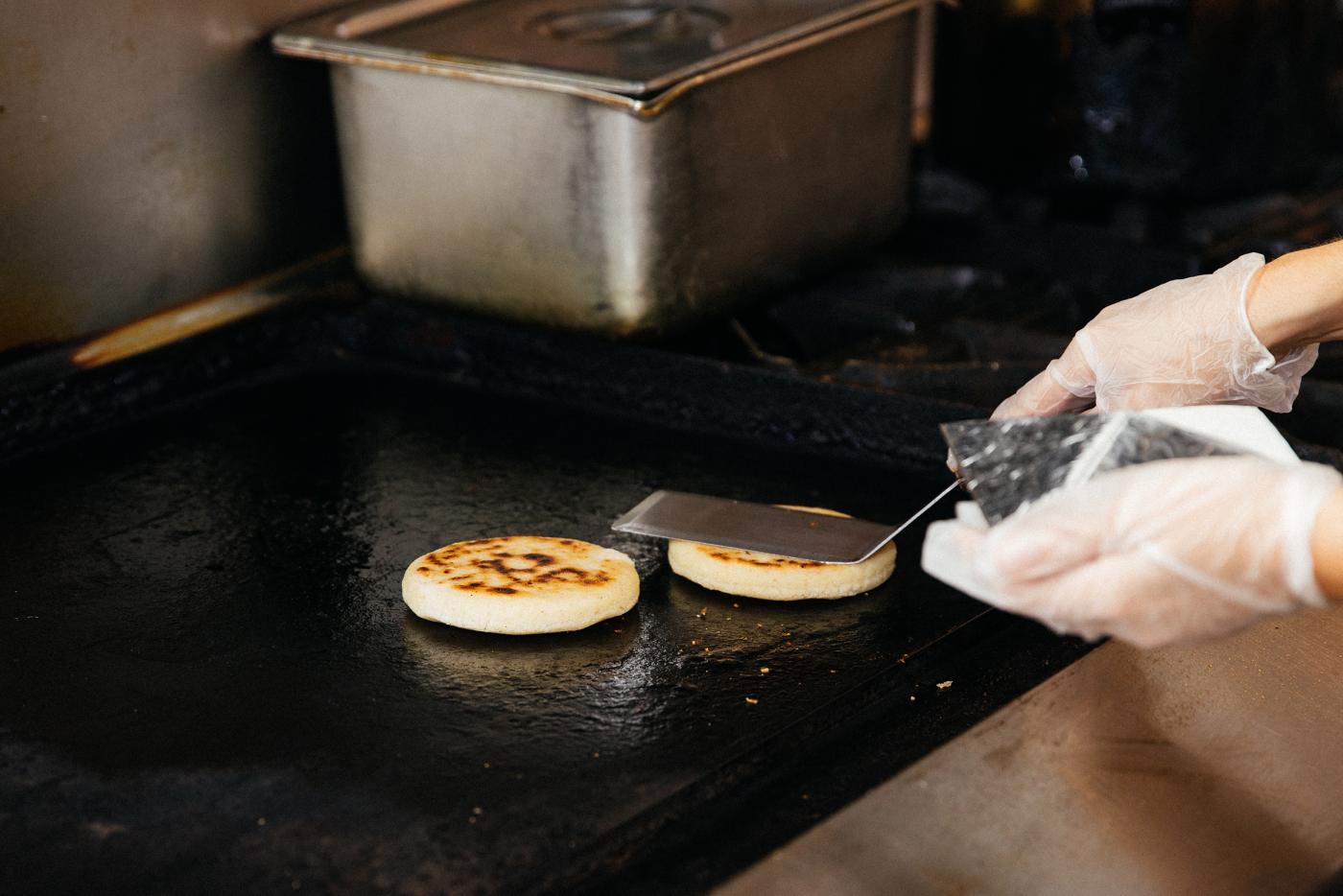 Andrade cooking an arepa, which is made of just three ingredients: precooked cornmeal, salt, and water. Photo: Sandy Noto for WTTW

That’s why they let you build your own dish, a la Chipotle, with a choice of base (in addition to arepas, you can get rice, a sliced plantain that looks like a hot dog bun, or greens), protein, toppings, and sauce. “We said, let’s offer something really traditional, but let’s make it friendly,” Navea explains.

Arepas are a longstanding culinary mainstay in Venezuela—they are believed to date back thousands of years in the region—and Andrade’s food draws on a familial tradition: she learned many of her recipes from Navea’s grandmother. “We’ve been together a long time, so she’s like my grandma, too,” she explains. The product of a poor family, Navea’s grandmother “was the most hospitable person I have known,” says Andrade. She would invite strangers into her home for food or offer them a place to sleep when they needed shelter.

“She was an inspiration when we decided to open a restaurant,” Navea says.

“We want to bring some of grandma’s recipes and show off the arepa,” Andrade adds. 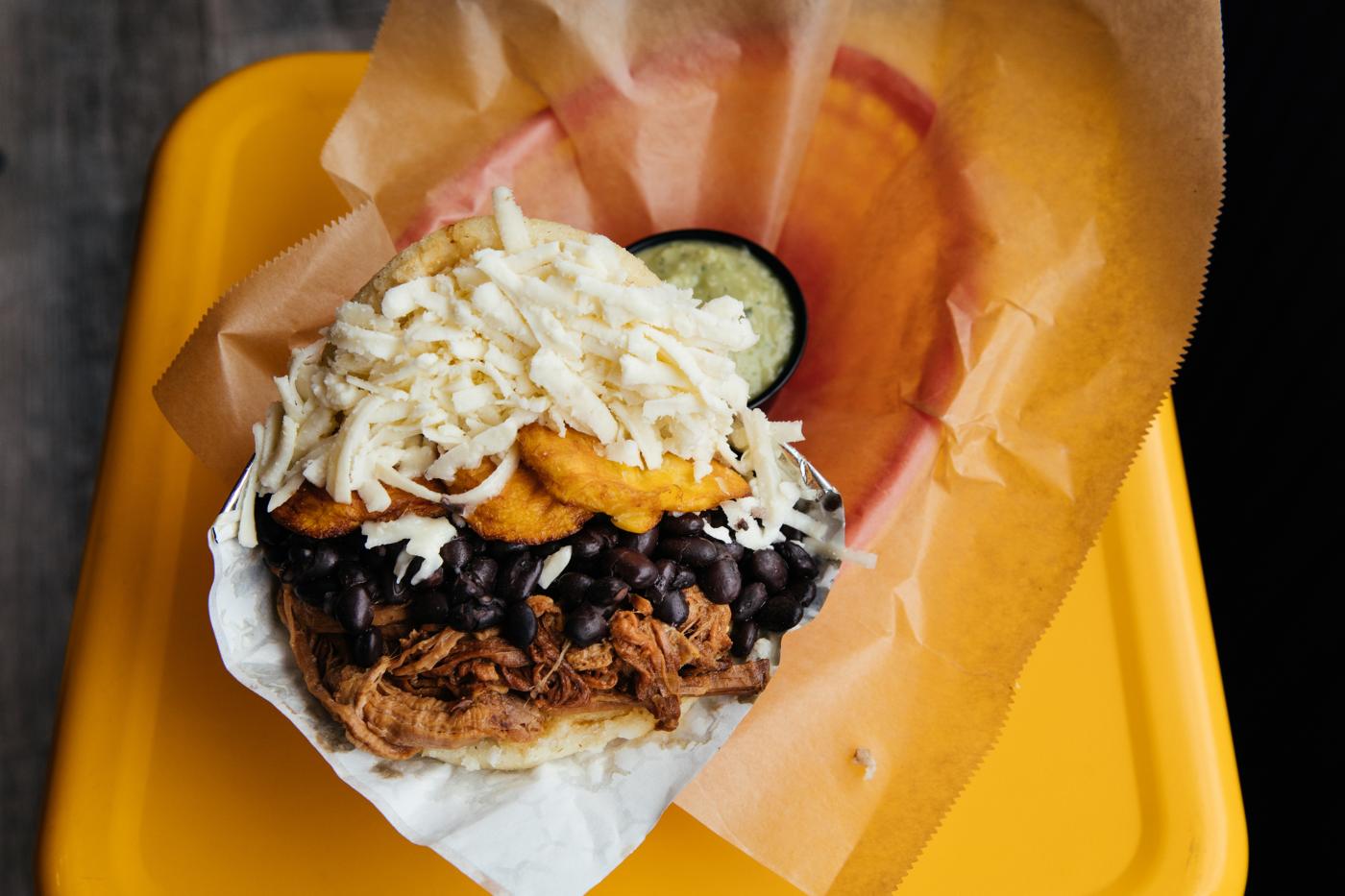 The arepas at Sweet Pepper are inspired by Navea's grandmother's recipes. Photo: Sandy Noto for WTTW

The influence of Navea’s grandmother, as well as that of Andrade and Navea’s hometown of Mérida, is evident in their restaurant’s name. Sweet pepper—ají dulce—is “something really typical in our city,” explains Navea. “When I say ají dulce, immediately my grandma comes to my mind, because I remember opening her fridge and seeing a lot of sweet peppers, always.”

“We use sweet pepper for almost all of our food,” says Andrade.

It’s the base for one of four sauces they offer at the restaurant, all of which have personal resonances for Andrade and Navea, as well as other Venezuelans. Mérida and the surrounding Andean region are important agricultural producers, and one of the area’s prized products is garlic—the main ingredient in Sweet Pepper’s mayo-based garlic sauce. (The region also used to be a major plantain producer, according to Navea, and Sweet Pepper’s plantain “bun” is a common street food in Mérida.) Guasacaca is a traditional Venezuelan sauce made of green vegetables and avocado that is similar to guacamole but thinner. And Sweet Pepper’s red pepper sauce is a product of Andrade and Navea’s first business together, back in Mérida.

Both of them had studied tourism in school, with Navea working as a tour guide and Andrade working for a university and later a hotel. Eventually, they started a business selling homemade sauces wholesale to markets. “When I studied hospitality, I liked working with food most,” Andrade says.

“She has a superpower, which is: she goes to a restaurant, she tastes the food, and she knows how to make it,” Navea continues. “And she does it better!”

But when Venezuela’s economy began to struggle, as global oil prices crashed and hyperinflation set in, running a business became difficult. “When we tried to buy the things to make our sauces, everything was always more expensive,” Andrade explains.

“Inflation was faster than us,” Navea adds. “Everything brought another problem, like it became hard to find the same containers to buy again.” 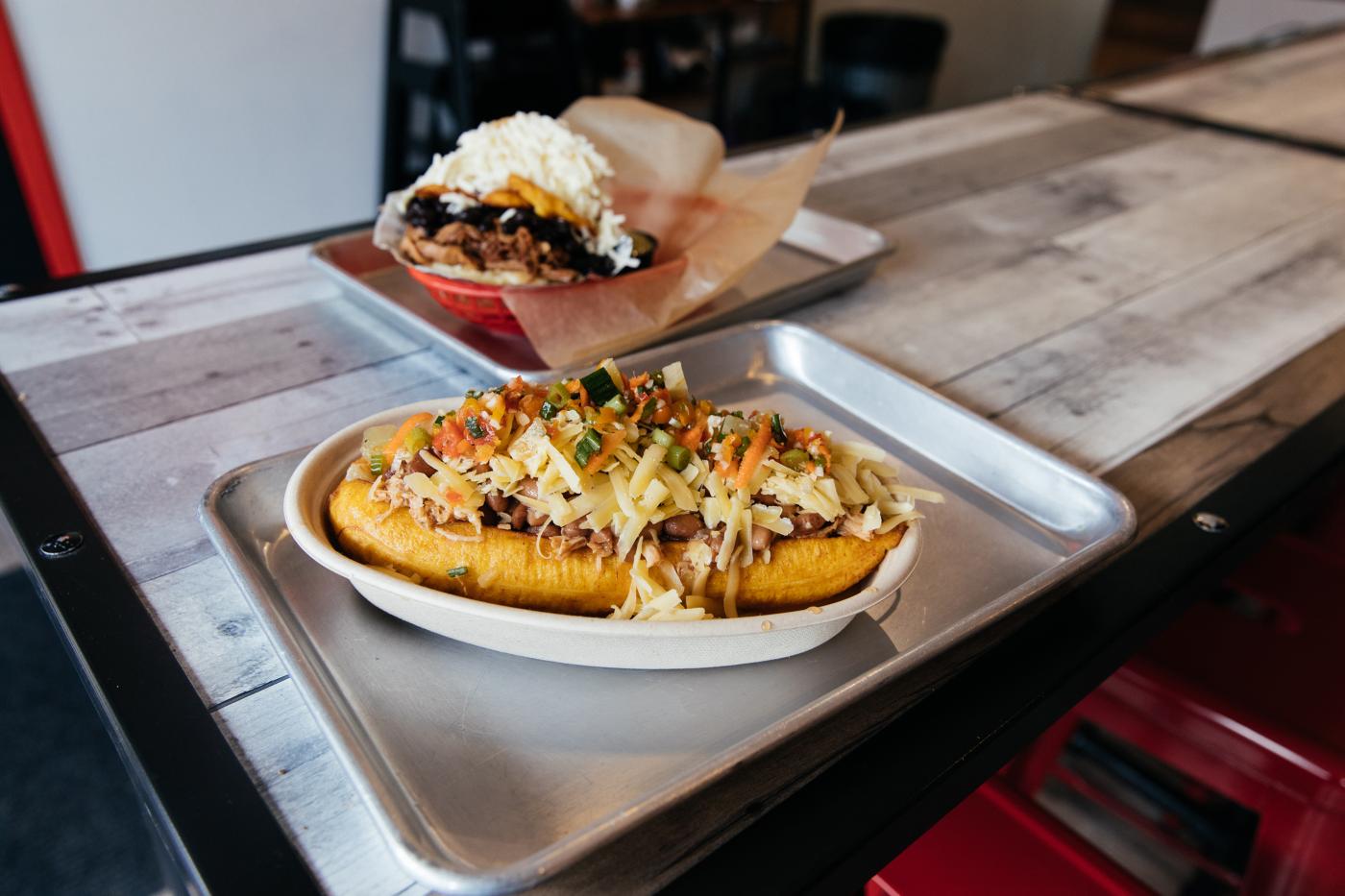 The plantain "bun" Sweet Pepper offers as a base is a typical street food in Andrade and Navea's hometown of Mérida. Photo: Sandy Noto for WTTW

When Andrade and Navea decided to make their lives in Chicago, they harbored hopes of once again operating their own business in the food industry. Andrade worked as a nanny for several years, finding a family that allowed her to bring her daughter to their home so that she didn’t have to find—and pay for—childcare. Navea delivered pizzas. They lived for a while with Andrade’s brother in his Albany Park apartment, before finding their own place. “We started over from zero,” Navea says. “Two or three years later, we had some savings. We were always saving money.”

Not that they had much when they decided to open a restaurant. When Navea noticed that the Lawrence Avenue storefront that they now occupy was for rent, “we didn’t have the money,” he says, laughing. “We had the idea.” Dave Miller, of nearby Baker Miller, had bought the former pizza place and decided to rent it out. Two other businesses were interested in the location, but Miller decided to offer it to Andrade and Navea, despite their lack of available funds.

“I could tell they were good people and that they would do whatever it took to make a new/better life for themselves,” Miller writes in an email. “They do things 100%,” he continued, “and have spent a lot of time studying [the restaurant business]—so if anyone deserves success it’s them.”

“He believed in us,” Andrade says.

“I hugged him right there,” Navea says. “It was only the second time I had seen him.”

So the couple set about finding the money to open a restaurant. “After we rented the place, we were like, ‘We have to do it, we don’t have any options.’ And when you feel like you don’t have options, you have to do it,” Andrade explains. They managed to pull together the capital through people’s generosity, and began to renovate the storefront. “Everything that you see here, we made it ourselves,” Navea says. “We painted everything, we took down a wall, Andrea designed the menu. She is not a designer. I didn’t have any idea about painting or building or anything; YouTube was my school.” 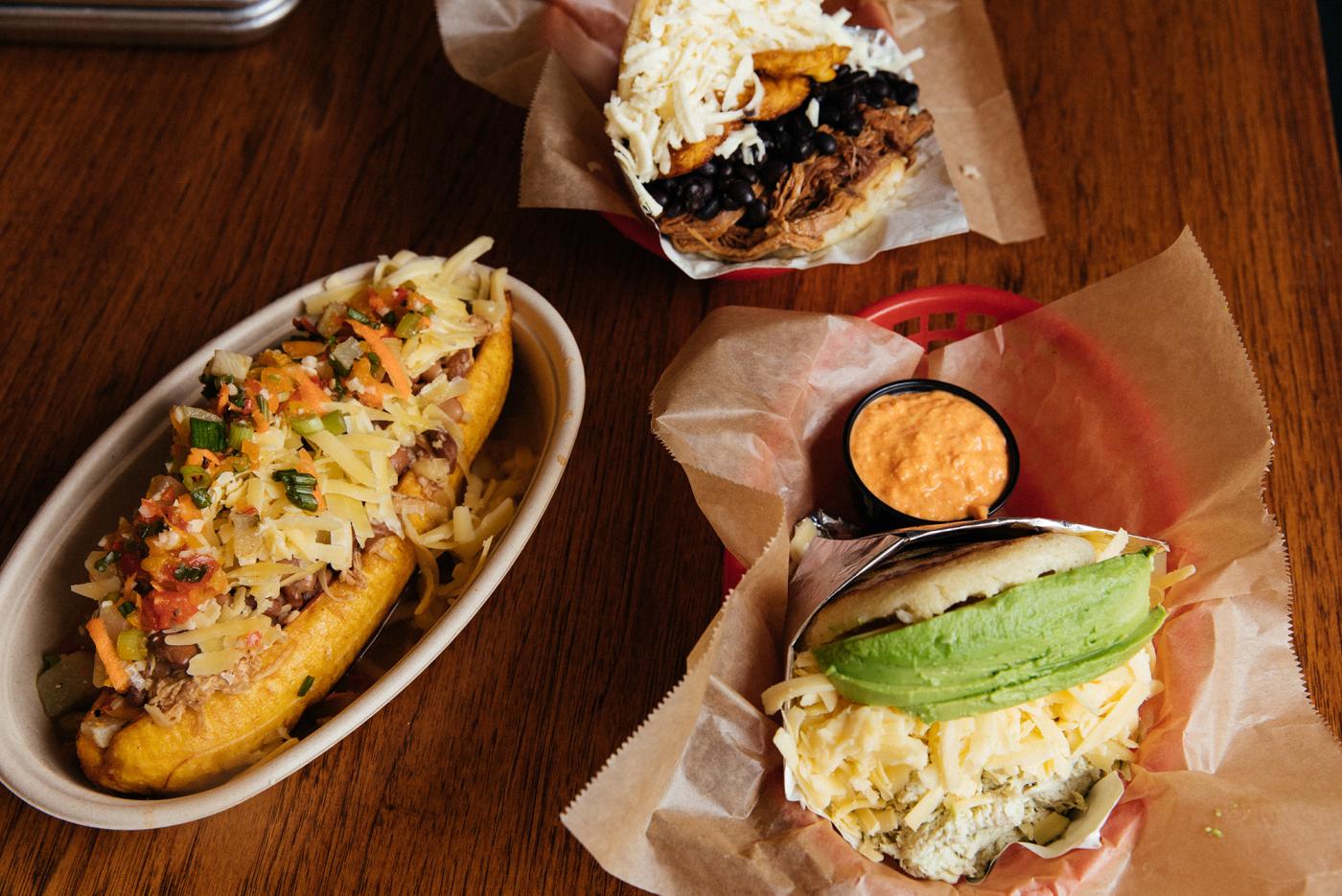 Sweet Pepper opened in June of 2018. Starting a restaurant from the ground up has been useful experience for the couple, who hope to eventually open more. “I would love to be in the whole country,” Navea says. “I don’t know when. Someday. It’s coming.”

“We see this place as a school,” he says. “We have learned a lot, and are still learning every day.”

They continue to work to put down roots here: Andrade is taking English classes at Truman College, Navea is active in the neighborhood Facebook group, both of Andrade’s parents have now joined them in Chicago, and her father works at the restaurant.

“A lot of people have helped us,” Andrade adds.

“Chicago feels like home now,” she says. “I even told Jose, it would be hard for me to go back to Venezuela. I don’t know if I could do it. We have a new life here.”

It may have been an unexpected new life, but they worked hard to build it.