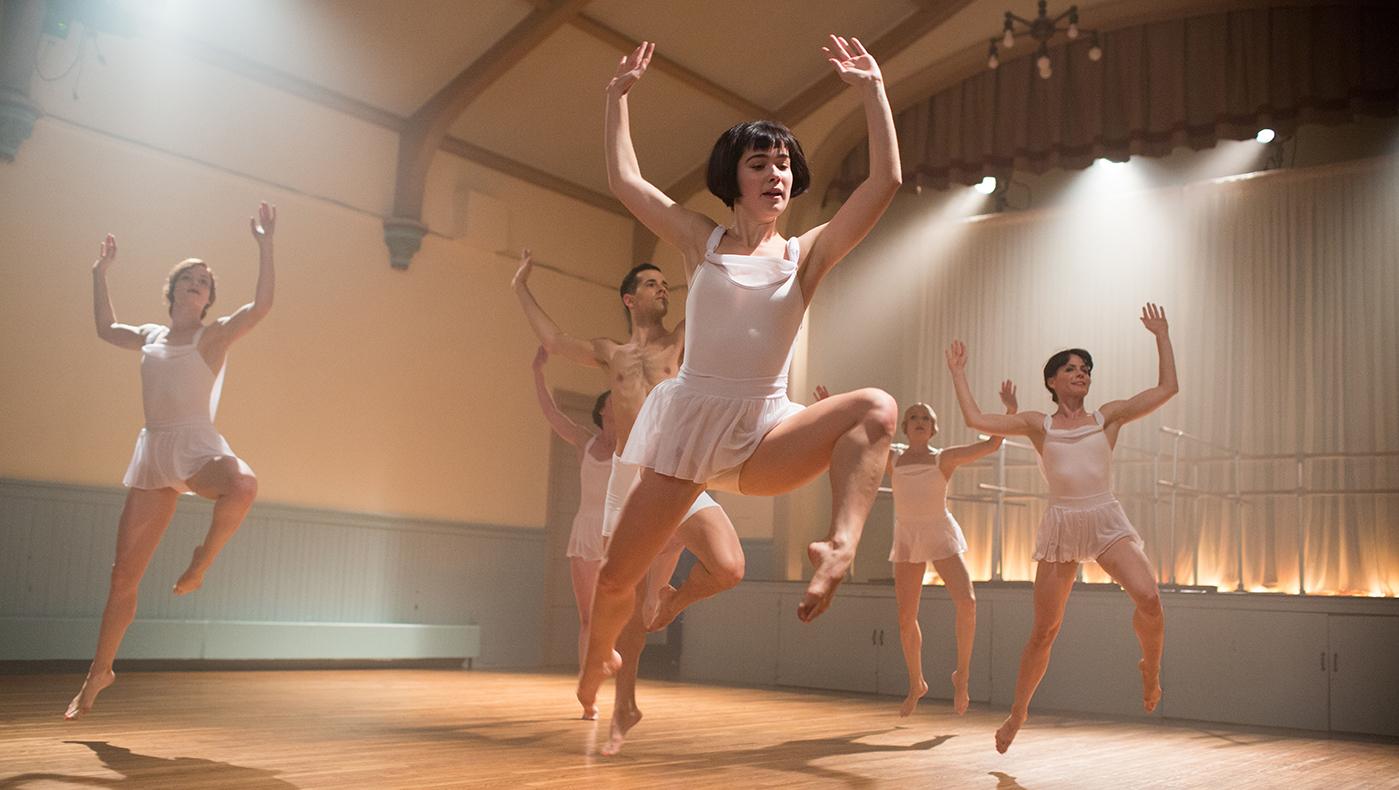 The Wichita native Louise Brooks has been accepted to a prestigious school in New York, but needs a chaperone. Photo: Thomas Concordia/PBS Distribution

The Chaperone is available to stream.

Wichita, Kansas, 1942. An attractive woman in her early sixties is climbing a staircase lined with 1920s-era movie stills and posters of a glamorous young woman sporting a black Dutch bob hairstyle. Reaching the top, the woman knocks on a door. “Louise?” she asks. “It’s Norma Carlisle.” The door opens, and before we can see who is inside, we instantly flash back to…

Summer 1922. A dance recital to benefit the Wichita Children’s Home. As a four-piece band plays a jaunty tune and partygoers mingle, a much-younger Norma enters on the arm of her husband Alan. As Norma eavesdrops, the “well-known Wichita pianist” Myra Brooks reveals to friends that her teenaged daughter Louise, performing that evening, has been accepted at Denishawn, a prestigious dance school in New York. But she can’t go without a chaperone, and nobody is available. As Norma and Alan take their seats in the audience, a young man, Raymond, approaches them to say hello. Alan looks uncomfortable and Norma’s reaction is frosty.

The young and beautiful Louise performs a graceful modern dance that clearly scandalizes some in the audience (one of whom just told Norma that she and her husband have joined the Ku Klux Klan), but Norma is mesmerized. After the performance, Norma approaches Myra and Louise, and, to Alan’s confusion, offers to accompany Louise to New York.

That night, as they retire to their separate beds, Alan expresses concern about the trip, hoping Norma won’t go “digging around.” Norma replies that she will do as she likes. The next day, Norma seals the deal with Myra and an excited Louise, who tells her, “I think we’re going to have a wonderful time.” 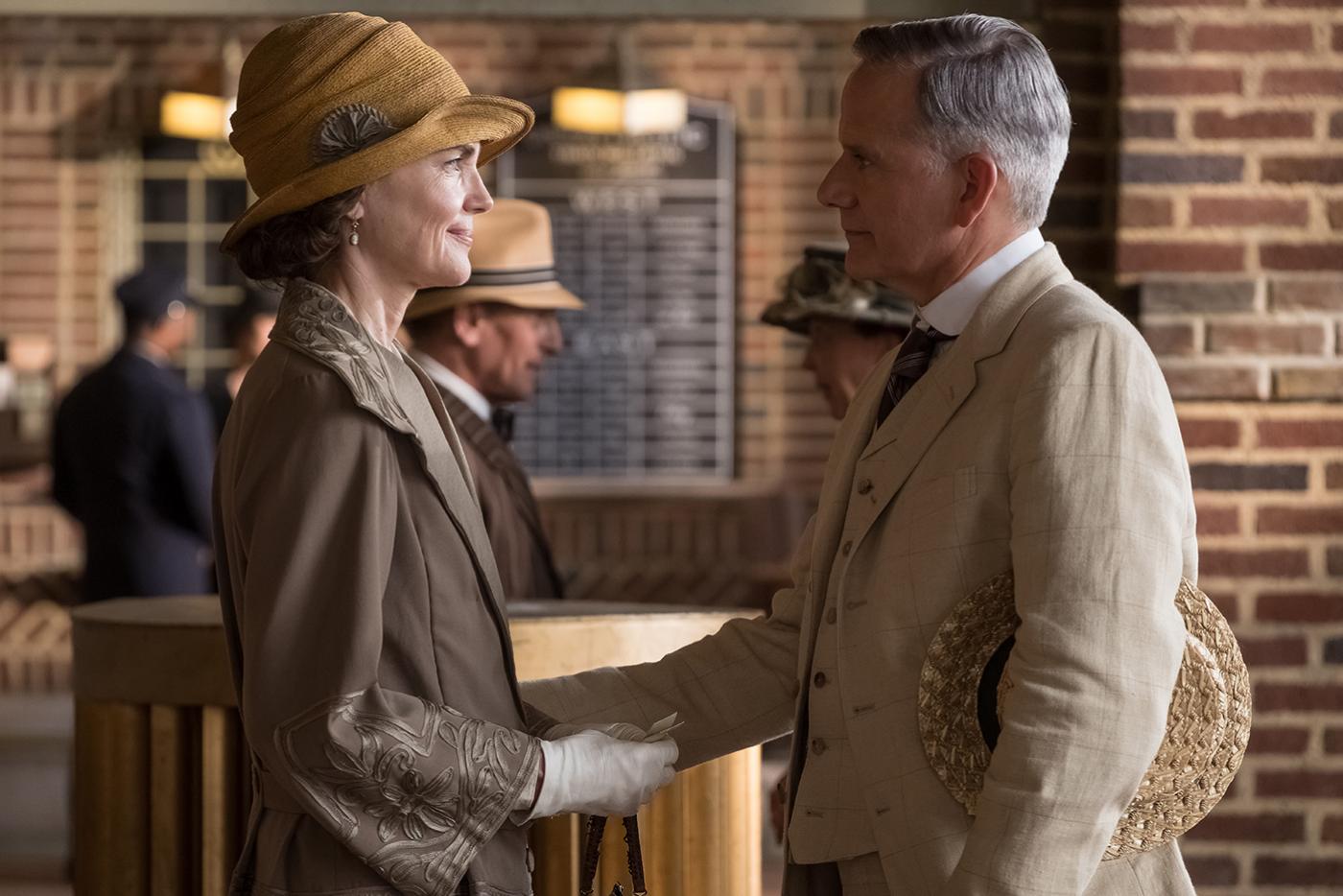 Once aboard the train, Norma realizes that she will have her work cut out for her: Louise attracts men like honey attracts flies, and is not exactly a respecter of authority. Having found Louise holding forth in the dining car in the company of two admiring men, Norma primly explains that “men don’t like candy that’s been unwrapped.” Louise’s derisive response is a bad sign. Later that night, we learn that Norma grew up in a New York orphanage; she was one of many children farmed out across the country on trains, and was adopted on sight by a Kansas farmer and his wife, who died when she was young, leading to her marriage to Alan at 16. Louise asks Norma if she is happy with Alan – there was clearly tension between them. Norma insists that she’s very happy. Louise is skeptical.

Upon arrival, Louise is instantly besotted with New York, turning on the charm with a reluctant cab driver. At their flat, Louise wants to go sightseeing, but Norma begs off, and Louise is forbidden to go out alone after dark. How long will that last?

The next morning, Louise arrives at Denishawn and meets its founders, the pretentious real-life dancers Ruth St. Denis and her husband Ted Shawn, who outline the very strict moral standards to which they expect their students to adhere. Louise is cynical at first, but she is drawn in as the dance class progresses.

Meanwhile, Norma hits the local ice cream parlor and meets young soda jerk Floyd Smithers, who helpfully gives her directions to the New York Home for Friendless Girls, the Catholic orphanage where she grew up. When she arrives during mass, a friendly German handyman, Joseph Schmidt, kindly fetches her a chair. Later, she asks the head of the orphanage, Sister Dolores, for information about her birth parents, but is told it is confidential. Sister Dolores asks Norma about her marriage, observing that she looks “prosperous and comfortable” and she should consider herself lucky. Norma has to concede that’s true, but…

…Flash back to a few months earlier, in Wichita. Norma arrives home unexpectedly during the day and catches Alan in the bedroom, doing…we don’t know.

That night, Louise notices that Norma is in a somber mood. Louise is not. Her new Dutch bob haircut is very becoming, and Ted Shawn has singled her out for special attention. “She’s a star,” he raves to Ruth. Later, Norma is passing the ice cream parlor – Louise is inside, flirting with Floyd behind the counter. Norma makes her come home. Louise thinks Norma should use her feminine wiles to get free stuff like she does. 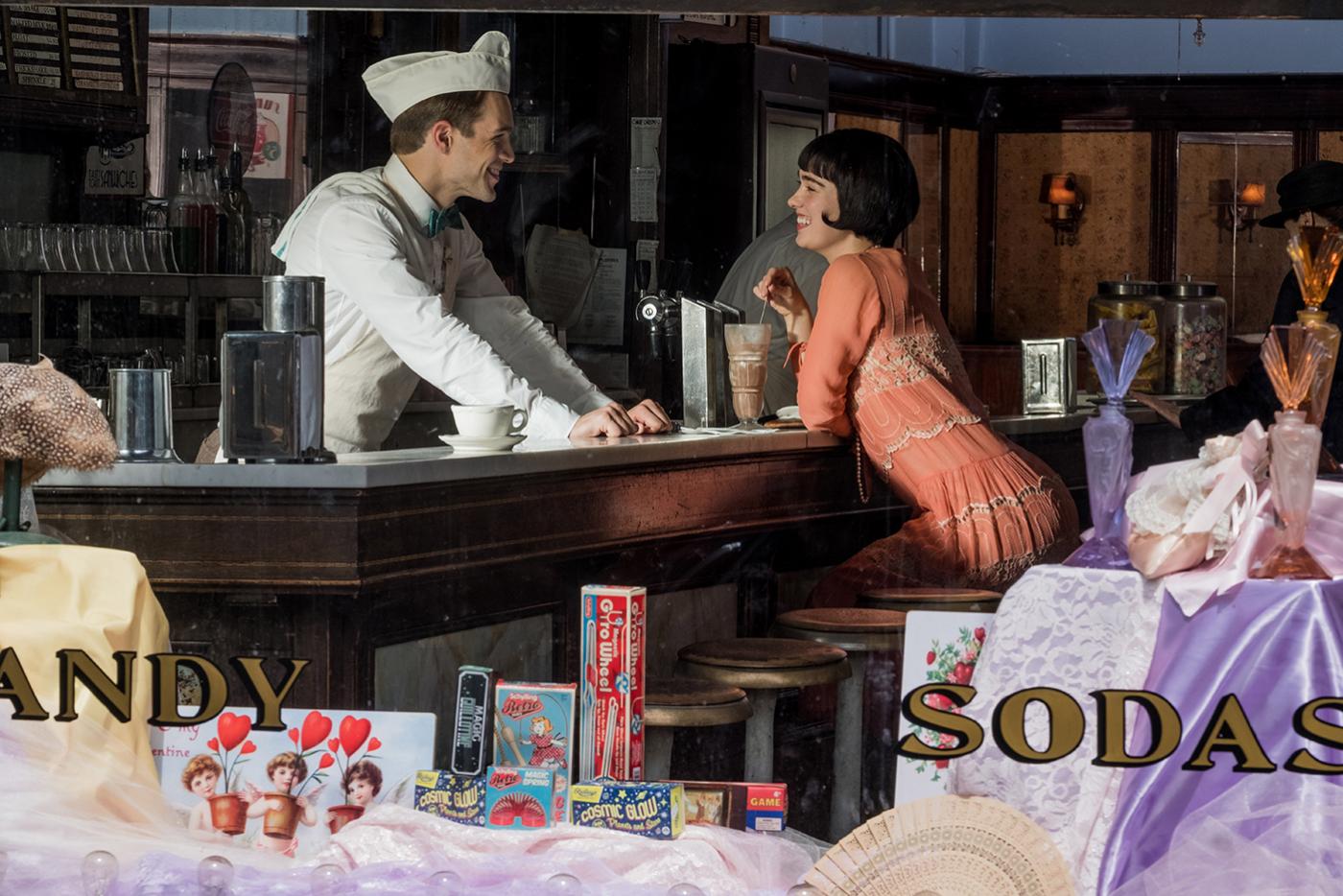 Norma returns to the orphanage, intentionally arriving during mass when the nuns will be otherwise engaged. Taking a page from Louise’s book, she tries to charm Joseph into helping her access her adoption records. Joseph sees right through her, and invites her to have tea with him instead. He would like to help her, he explains, but his daughter Greta lives at the orphanage. He was imprisoned during the war and separated from his wife and daughter. After his wife died in the influenza epidemic of 1918, his daughter was taken in by the nuns, and he lives and works at the orphanage to be near her. Norma convinces him to secretly let her rifle through the files, where she jubilantly finds a name, Mary O’Dell, and an address in Haverhill, Massachusetts. That night, Norma posts a letter to her.

Afterward, Norma offers to pay Joseph for his kindness; he demurs. Again, she flashes back to that day when she discovered her husband in the bedroom. This time, we see what she saw: her husband Alan naked in bed with Raymond. Moreover, their affair has been going on for decades – since before his marriage. Norma screams and flings a vase at him; she wants him gone. Later at his office, they have a bitter conversation – if word of his orientation gets out, he could be murdered, and if she divorces him, her reputation will be ruined. Raymond is thinking about leaving town, Alan tells her, but he doesn’t want him to.

Louise has become Ted Shawn’s favorite pupil, as is obvious when he dances with her in front of the class. “We got lucky with that one,” Ted tells Ruth. “Don’t get too lucky,” replies Ruth, glaring at Louise.

The next day, Norma reunites with Joseph for a walk in the park. They are becoming friends. Norma arrives home to big news from Louise: the Denishawn troupe is touring to Philadelphia and Louise is the only student they chose to join them for an overnight trip. Oh, and a letter came for Norma…from Haverhill, Massachusetts. 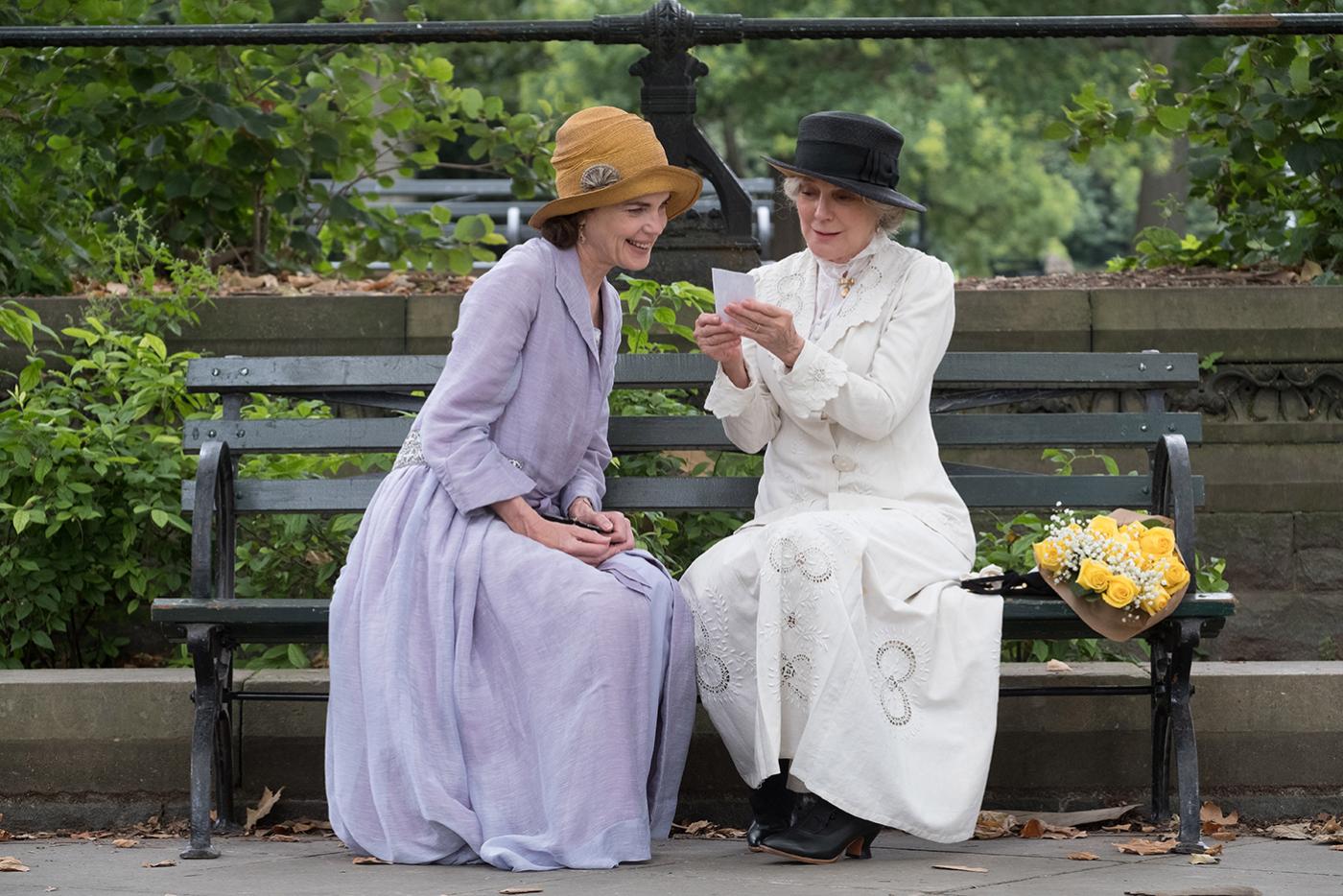 A few days later, Mary O’Dell meets Norma in Central Park. Their reunion goes well at first – they trade life stories, and Norma learns her birth father abandoned Mary when he learned she was pregnant. Norma is stung to learn that she was left at a mission when she was just six months old, so her memories of a woman “singing to her in a foreign language” are not connected to Mary. Things go downhill from there – Mary has never told her family about Norma, and never will. They part forever. Norma is crushed.

Later, she watches Louise’s dress rehearsal with Ted and the company – it is a triumph, and Ruth tells Norma that if Louise is successful on the tour, she’ll be asked to join the company and move into their boarding house. But Louise will have to adhere to Denishawn’s strict “moral code,” Ruth says archly, watching her husband fawning over the girl.

Afterward, Norma and Louise are celebrating in the ice cream parlor when she overhears Louise arranging to meet Floyd at a speakeasy. That night, when Norma wakes to find Louise missing, she recruits Joseph to accompany her there. When they arrive, it’s clear that Floyd is in over his head, begging them to help Louise, who is drunk and obnoxious. Norma and Joseph bear her away, over the protests of her male companions. Later, Norma urges Floyd to forget Louise – he’ll be spared a lot of pain.

Norma nurses Louise through her first hangover; Norma is worried that Louise was “compromised.” That ship has sailed, Louise tells her…not only was she seduced by her dance teacher back in Wichita, but there are nude photos. Norma is appalled – he must be reported and her mother told. Louise laughs sardonically – her mother already knows and thought the pictures might be good for Louise’s career. Norma had no idea that Louise was a victim of abuse, and feels guilty for lecturing her. 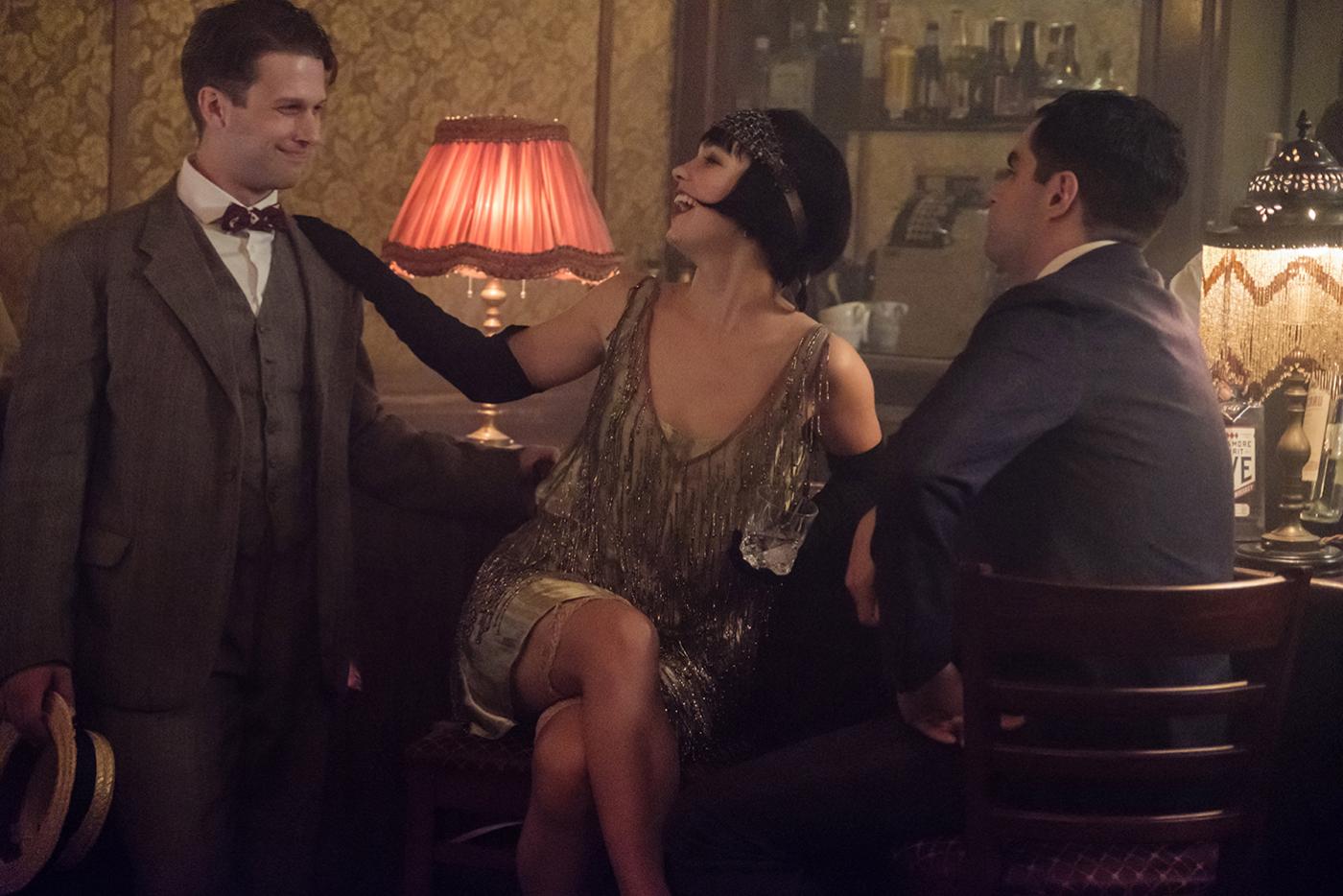 Norma can only do so much to protect Louise, and eventually has to intervene at a speakeasy. Photo: Barry Wetcher/PBS Distribution

The next day, Louise leaves for Philadelphia. And that night, with Louise gone for the night, Norma goes to see Joseph at the orphanage. And one thing leads to another…

Later in bed, Norma and Joseph discuss Alan’s homosexuality and the stigma attached to it. Joseph understands; he had a gay cousin who was almost beaten to death back in Germany. Does she want a divorce from Alan? Norma doesn’t know how would she explain it, especially to their grown sons. In the morning, Joseph sneaks Norma out of the orphanage. But they are seen by Sister Dolores, watching from an upstairs window.

Louise returns from Philadelphia to announce that she has made the troupe, and will move into the Denishawn boarding house on Friday. Norma urges her to apologize to Floyd for her behavior at the speakeasy.

Norma is alone in the flat when she gets visitors: Joseph and his young daughter Greta, along with their luggage. Sister Dolores fired him from the orphanage after seeing him leaving with Norma. He has a friend in Brooklyn who will take them in for now. Norma promises to help him and Greta, as Louise returns, amused to see the man who carried her out of the speakeasy. Norma introduces Joseph as her “brother,” telling him to meet her, with Greta, at Grand Central Station on Saturday morning: she’s taking them with her to Wichita. After they leave, Norma concocts an elaborate backstory of her history with her “brother” Joseph. Louise, smiling, doesn’t believe a word of it, but is glad, at least, that Norma has cast off her corset. 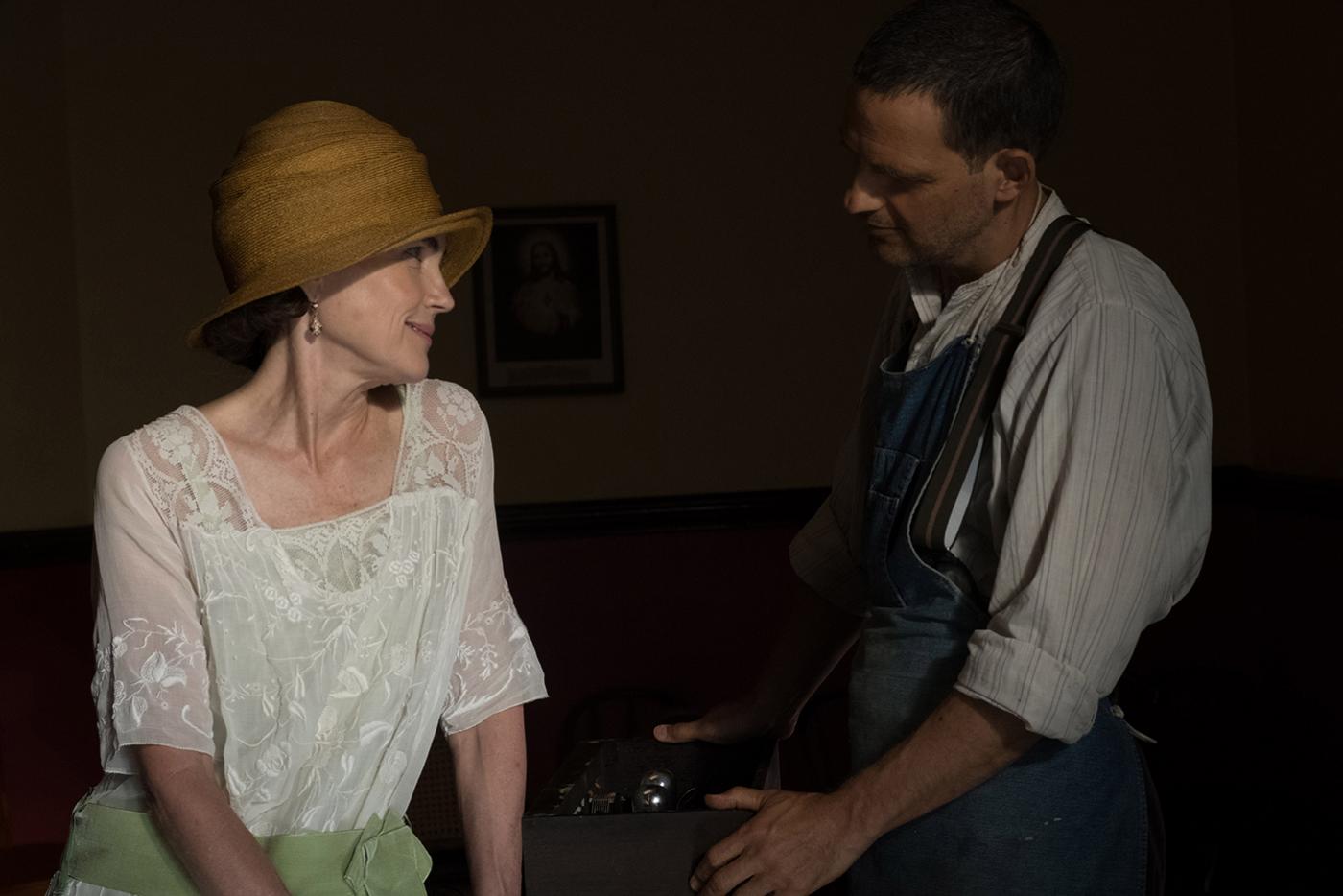 On the train to Wichita, Norma tells Joseph that he will continue to be her “brother” to everyone except her husband, who will be told the truth privately. Will it work? asks Joseph incredulously, as Greta sleeps in his lap. “It will, because we want it to,” replies Norma.

Jump back to 1942 in Wichita. Greta is an adult with a daughter of her own, and apparently everyone, including Raymond, is cohabiting in the Carlisles’ home together. Raymond serves up gossip about Louise – she’s back in Wichita. Later, Myra Brooks shares with Louise that Ruth St. Denis dumped Louise, as did Paramount Studios. “Everything she touches flops,” retorts Myra.

And now we are back at the beginning, with Norma standing in Louise’s bedroom. Louise is now 35, broke, bitter, drinking, and feeling very sorry for herself. “I hated Hollywood, and Hollywood hated me,” she tells Norma. Norma urges her not to give up, and hands her a hundred dollars in cash. “Get on a train. Go to New York. Don’t come back,” Norma tells her.

Later on the street, Joseph asks Norma how things went with Louise. Norma shrugs. “She always has to do things her own way.” Arm in arm, they continue toward home, wondering what to have for dinner.