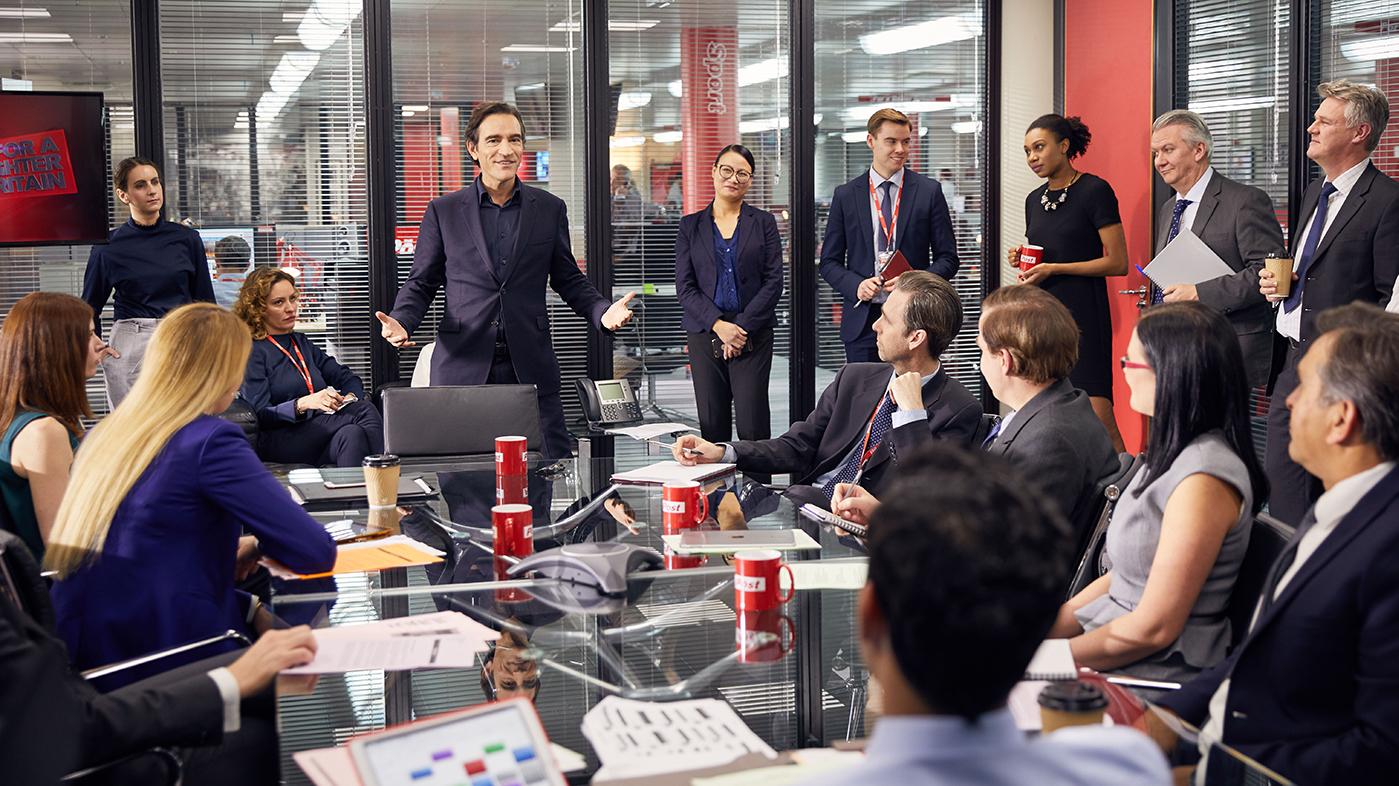 Duncan's tyrannical rule of his newsroom is on full display as the Post deals with negative publicity. Photo: Lookout Point / Robert Viglasky

Press airs Sundays at 9:00 pm and is available to stream. Recap the previous and following episode.

Duncan has scored a coup. Holly has left the Herald in frustration, for the larger readership and greater resources of the Post. As she marches past her old workplace to her new one, much more dressed up than usual, James spots her and is shocked by her decision, but she continues on to the Post’s shiny offices. She’ll be a special correspondent, focused on uncovering and writing investigative stories – the Post’s owner George Emmerson wants more serious journalism.

She already has three stories waiting. She couldn’t cover them at the Herald because her sources wanted money, and the Herald doesn’t pay for stories. The Post lacks any such scruples, so Holly wants to start with a young man named Adnan who saw 93 people slaughtered in his home country of Syria and knows where their bodies are. He’s struggling to support himself and his brother, so he needs money; his story is all he has. Duncan asks to meet Adnan personally before paying for the story, and gives Holly something else to work on, from a locked safe he keeps of potentially damaging stories: a napkin, given to him by an MI5 agent after a boozy meal, with “resonance” and a date written on it.

Despite Duncan’s excitement to have Holly, he prevents her from attending the editorial meeting – she has to earn her status. She walks in anyway. As the staff discusses a vicious front-page story Ed wrote about a 17-year-old bully who hospitalized three people, Holly continually tries to chime in but is ignored by Duncan. He eventually kicks her out, and orders everyone to keep pushing the story despite misgivings from some of the staff.

Ed is being shadowed for work experience by a young woman named Jools who is just out of college and full of idealism. Flirting with her, he brags about his front-page stories. Holly shows up to throw some cold water on his boasts, and he in turn implies that she slept with Duncan to get her new job. He is not happy that she works for the Post now, especially after she slept with him and then threw him out of her flat.

Holly brings in Adnan to speak with Duncan, but breaking news delays their meeting. The 17-year-old bully has committed suicide and Ed’s demonizing story about him was found on his iPad, so people are starting to blame the Post. Holly once again slips into an editorial meeting where Duncan insists on holding the course and not backing off the story. As Holly tells him it’s the wrong decision, several of his editors agree with her. Ed is the only person to defend Duncan’s choice.

Duncan storms off to his office and slams the door. Holly, needing him to speak to Adnan, who has only an hour before he has to go back to work, goes in despite Duncan’s assistant’s warning that slamming the door means he doesn’t want to be bothered. And you don’t want to get on Duncan’s bad side, the assistant adds: when Duncan found out a reporter was leaking stories to another paper, he ran a takedown of the reporter’s mother in the Post.

Holly doesn’t care. She has realized that Duncan isn’t just upset about the bully story; there must be some personal drama. Having noticed that he had a camera in his office to give to someone as a present, she has surmised that it’s his son’s birthday, which must be difficult now that he has separated from his wife. She’s right, Duncan admits: his wife and her new boyfriend are trying to restrict all access to his son.

Having calmed Duncan’s temper, Holly advises him to reverse the Post’s bad publicity: launch an anti-bullying campaign, blame Internet trolls for the suicide. Duncan loves the idea, and takes it one step further: they’ll get the bully’s mother to be a part of the campaign. Holly is appalled; Duncan assigns Ed to get the mother on board.

Holly continues to try to get Duncan to speak with Adnan, but Adnan soon has to leave, disappointed. Duncan asks Holly for more advice about his son, but she refuses to answer him; she’s upset that they have lost Adnan’s trust.

Ed gets the mother’s cell phone number and breaks her down, eventually offering her money to support  the campaign. The editors once again converge in the meeting room to watch as the mother records a message via video call. Holly, watching, tells Jools the woman reminds her of her own mother when her father died: stricken, confused, uncomprehending. Ed, learning that the Post’s new direction on the bullying story was Holly’s idea, tells her she’s just as ruthless as Duncan, despite her ideals. She agrees, then snaps a picture of the pitiful mother as Duncan urges her to read a statement. 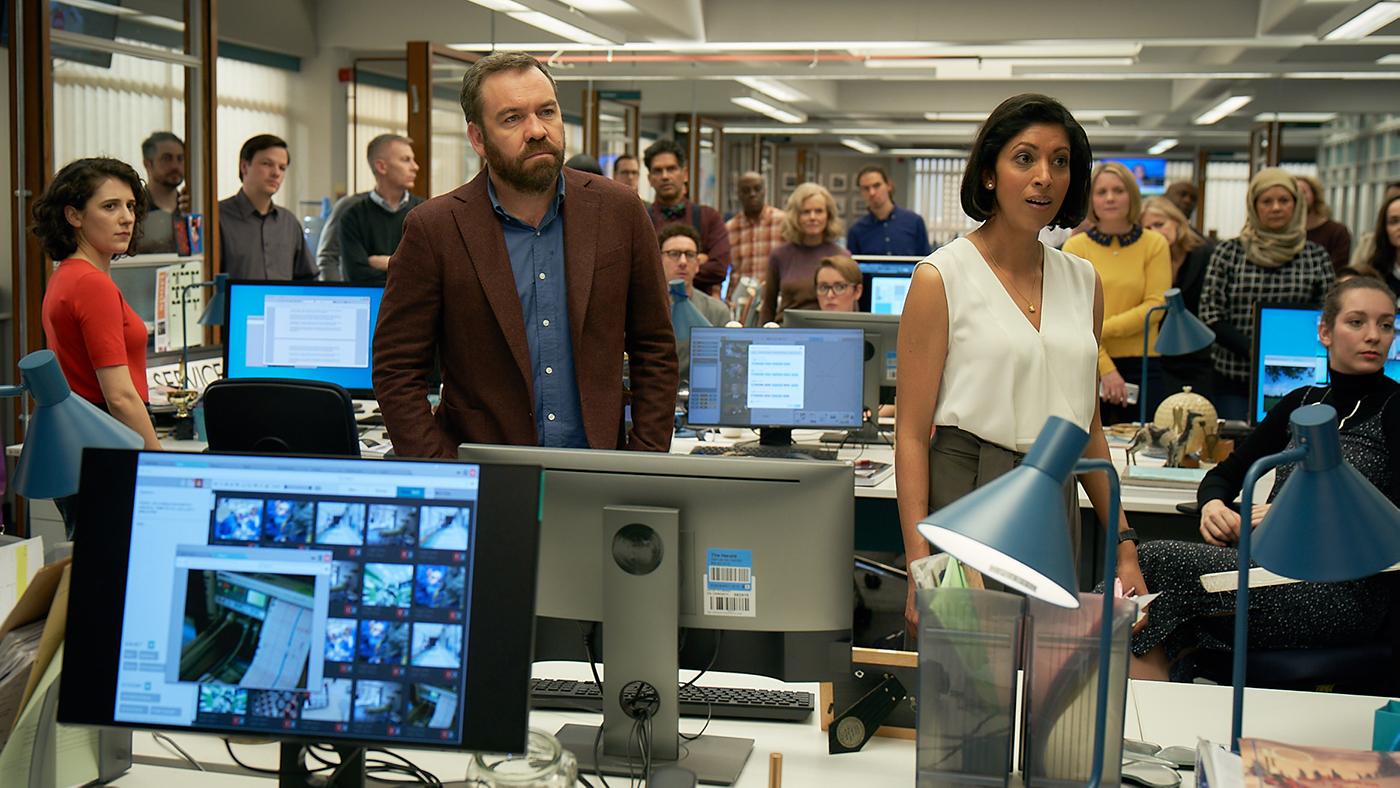 Holly's absence has put the Herald in some disarray, but Amina has a hopeful announcement. Photo: Lookout Point / Laurence Cendrowicz

Meanwhile at the Herald, Holly’s absence has left things in some disarray. Without her to pitch the stories, the editorial meeting is more disorganized, and Amina keeps interrupting to ask about the print edition of the paper: who reads it? Who would miss it? Despite all this, Amina, Peter, and Leona seem upbeat.

After the meeting, Peter tells Amina that he confessed to his wife that he slept with Amina; they both want to keep trying to save their marriage, and he promised her nothing more would happen. Amina takes this well – or at least hides her disappointment that Peter still loves his wife and not her.

She then gathers the staff to make an announcement. From now on, the print edition of the Herald will be free, overseen by Peter and his new deputy, Leona. It will be slimmer and have more advertising. At the same time, while breaking news stories will remain free online, more in-depth articles will now require a subscription. These changes will ideally expand readership and bring in more money while allowing the paper to stay true to its ideals, without laying off anyone in the restructuring.

During this announcement, Holly appears. She asks Amina if she can come back, but as a reporter, not an editor. She has a great first story: the unethical practices of the Post under Duncan’s tyrannical rule. Amina decides to take her back: she was right in many of her criticisms, and the new structure might help to address them.

But before Holly writes the Post story, there’s something bigger. Holly’s mention of Duncan’s napkin and “resonance” have triggered Leona’s memory of James’s reluctant whistleblower. Holly and James will work on uncovering this government secret.

Holly still has another story she wants to follow, too. That evening, she takes her advance from the Herald and hands it over to Adnan: she wants to help him tell his story.

Back at the Post, Jools has left for good: like Holly, she feels uncomfortable with the paper’s – and Ed’s – ethics.

Duncan finds a note from Holly: “Hated it. Thanks for the opportunity.” He goes to drop off his son’s gift but isn’t even allowed to see him. Depressed and lonely, he retreats to his flat and holds the hand of the prostitute to whom he has given a key to his flat, sadly sipping a drink.