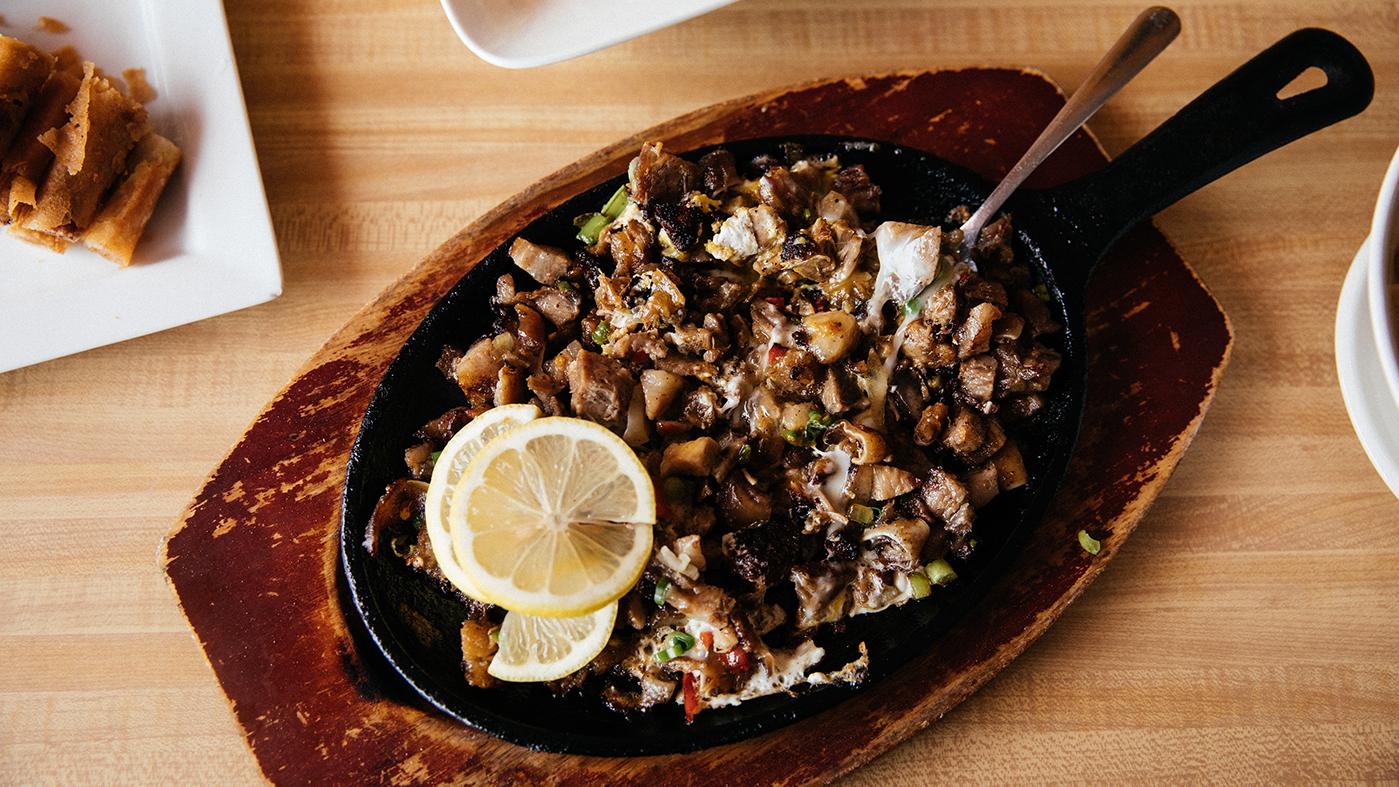 Find stories about some of Isla Pilipina’s neighboring restaurants at wttw.com/nopassportrequired. While the location on Lawrence Avenue has closed, a new one has opened downtown in Urbanspace Food Hall at 15 W. Washington Streetl

Across the street from a post office and a Burger King, in a strip mall that includes a Little Caesar’s, there’s a restaurant that offers a vivid contrast to its surroundings. The exuberant art and saffron-colored walls of Lincoln Square’s Isla Pilipina (2501 W. Lawrence Avenue) are the opposite of the utilitarian décor of the nearby chain restaurants, while the home-style Filipino food it serves is welcoming and comforting, a warm corrective to the bureaucratic nightmares of the post office.

There’s kare-kare, a stew of oxtail and green beans in a rich peanut sauce brightened by shrimp paste. Lumpia shanghai are bite-size eggrolls with a crust that shatters when you crunch into them; Isla’s menu lists “love” as an ingredient. Pork belly is deep-fried and doused with gravy for lechon kawali, a favorite dish of Isla’s owner, Ray Espiritu.

“I grew up fascinated with my mother’s cooking,” says Espiritu. “I never really loved high school lunches or any of that, anything outside of what my mom prepared in the kitchen” – dishes like adobo, a pork or chicken dish marinated and braised in vinegar and soy sauce in its most popular version. It’s the kind of recipe where everyone seems to have their own variation: Espiritu says the adobo served at Isla isn't quite like his parents’, with a shorter marinade, a thicker broth, and boneless meat. 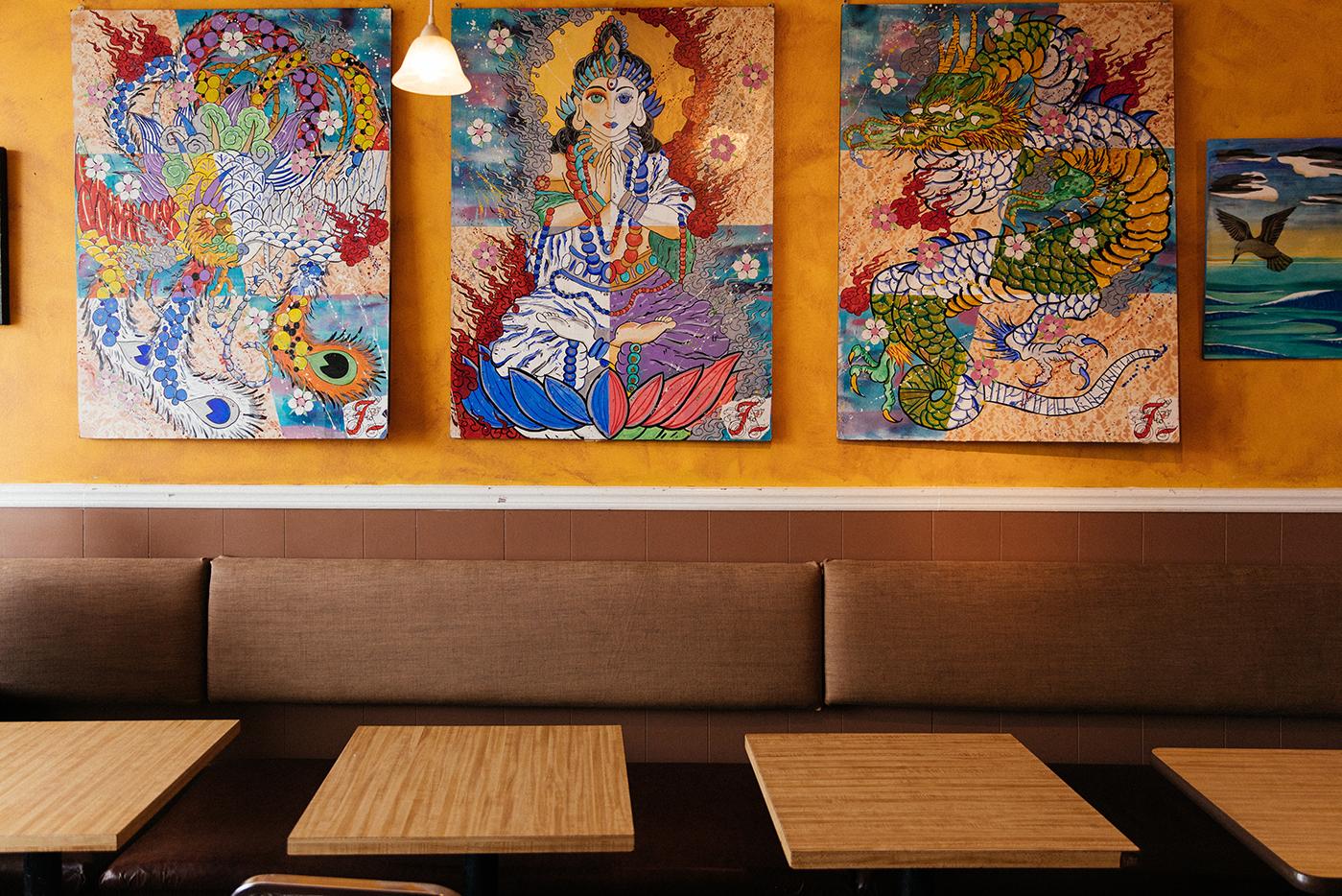 The art on the walls of Isla Pilipina is by friends of Ray Espiritu, the owner. Photo: Sandy Noto for WTTW

Isla’s adobo is different because Espiritu took over the restaurant from his parents and installed a new chef, who brought his own recipes and helped teach Espiritu how to cook. (Espiritu still lends a hand in the kitchen when the restaurant is especially busy.)

Around 2003 or 2004, his parents had decided to open a restaurant in the same space that Isla still occupies, which had housed varying versions of Filipino-owned food establishments since the 1980s, according to Espiritu. His parents operated the restaurant as a “turo-turo” joint; the name translates to “point-point,” because you order from a variety of dishes arranged buffet-style on a steam table by pointing at the food you want.

After two or three years of business, Espiritu’s parents let him take over and revamp the restaurant. “I was finishing up at school – I was in art school,” he recalls. “I didn’t have much confidence in finding a job, so I panicked and made the decision to ask my parents, ‘Can I take over the lease?’ At the time, their chef passed away, so I had nothing: I had no capital, I didn’t have the know-how.”

Luckily, Espiritu found another chef, Marc Nunez, who had trained at a well-known restaurant in the Philippines. With Nunez’s help, he switched to a casual sit-down and take-out format and began building a new customer base. “It was just the two of us for a couple of years,” he says. “I learned a lot about how to cook, and preparation, and all the things that I needed to know, in like a two-year timeframe. Slowly, ever so slowly, we got a little bit busier. Twelve years later, here we are.” 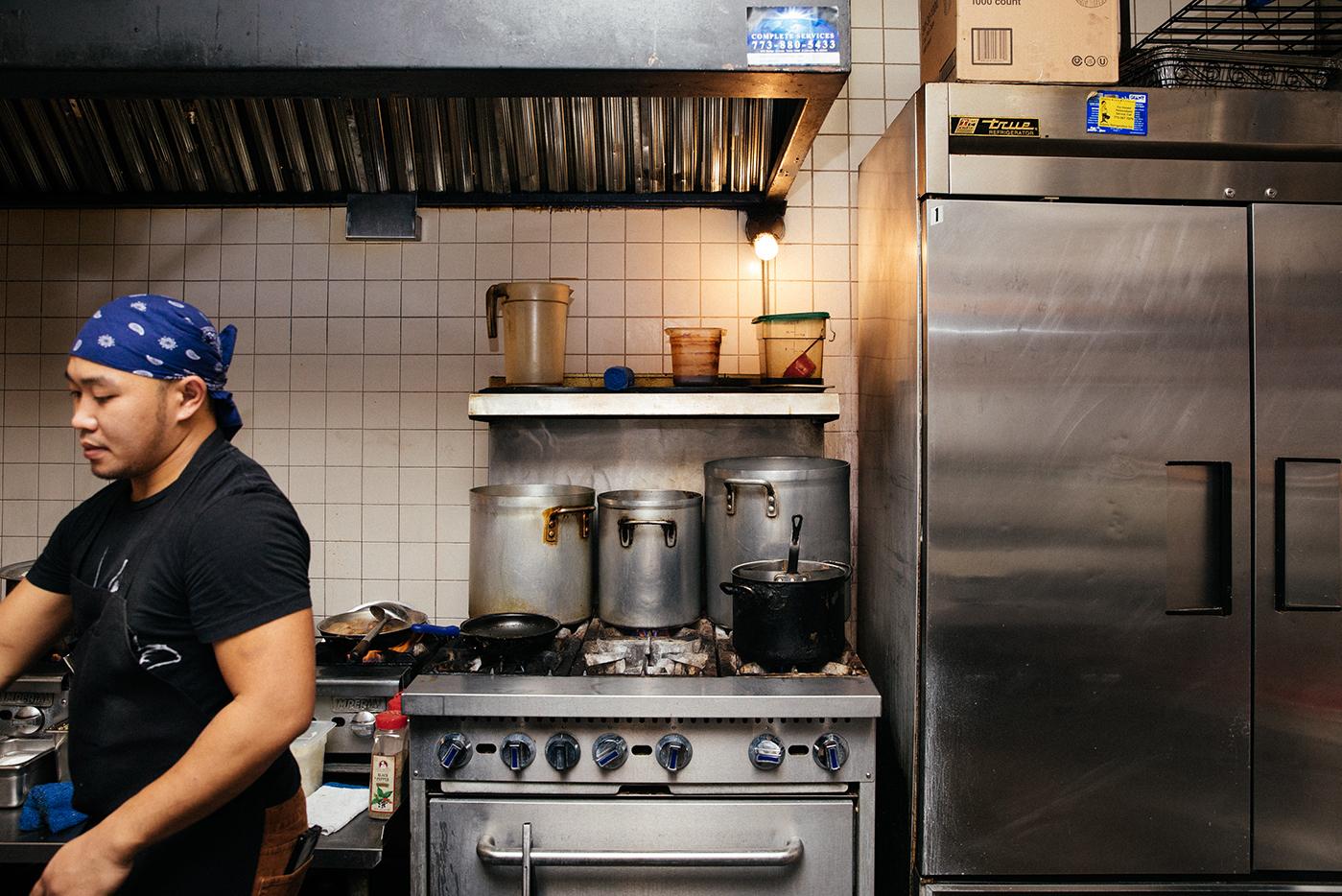 Marc Nunez, the chef at Isla, trained at a top restaurant in the Philippines. Photo: Sandy Noto for WTTW

It's a time of increased focus on Filipino food across the United States, with restaurants like Bad Saint in Washington, D.C. attracting national attention and a spate of new places opening in Chicago in the past year to more-than-usual publicity. Chicago also hosted the Midwest’s first Filipino Restaurant Week in October of this year. “It’s an intriguing and exciting cuisine that has been unknown or misunderstood for so long,” writes Jacqueline Chio-Lauri, the editor of The New Filipino Kitchen, in an email. (Espiritu is a contributor to the book.) “Now that it is emerging in popularity, there is a wide and deep scope to cover and demystify it.”

She also makes the point that Filipino food is already popular in the U.S., given that there are an estimated four million Filipinos in the country, with more than 130,000 in Chicago, as of the 2010 census. “I find it inaccurate and inappropriate to categorize a cuisine, eaten on a regular and ongoing basis by millions of people of Filipino heritage living in the U.S., a trend… Besides, a trend has a limited life span. I expect interest in Filipino food to continue to grow (not wane, as happens to trends), for many years to come.”

While the first Filipino immigrants came to Chicago as early as the turn of the twentieth century, it was only after the passage of the federal Immigration and Nationality Act in 1965 that large numbers of Filipinos began moving here. Unlike many other immigrant groups in the city, they did not necessarily congregate in any one area, though a large concentration did settle on the Northwest Side around neighborhoods like Albany Park and North Center. (Although the Philippines were an American colony beginning in 1898, Filipinos could not become American citizens until after Filipino independence in 1946, and Filipino immigration was restricted by draconian quotas.) 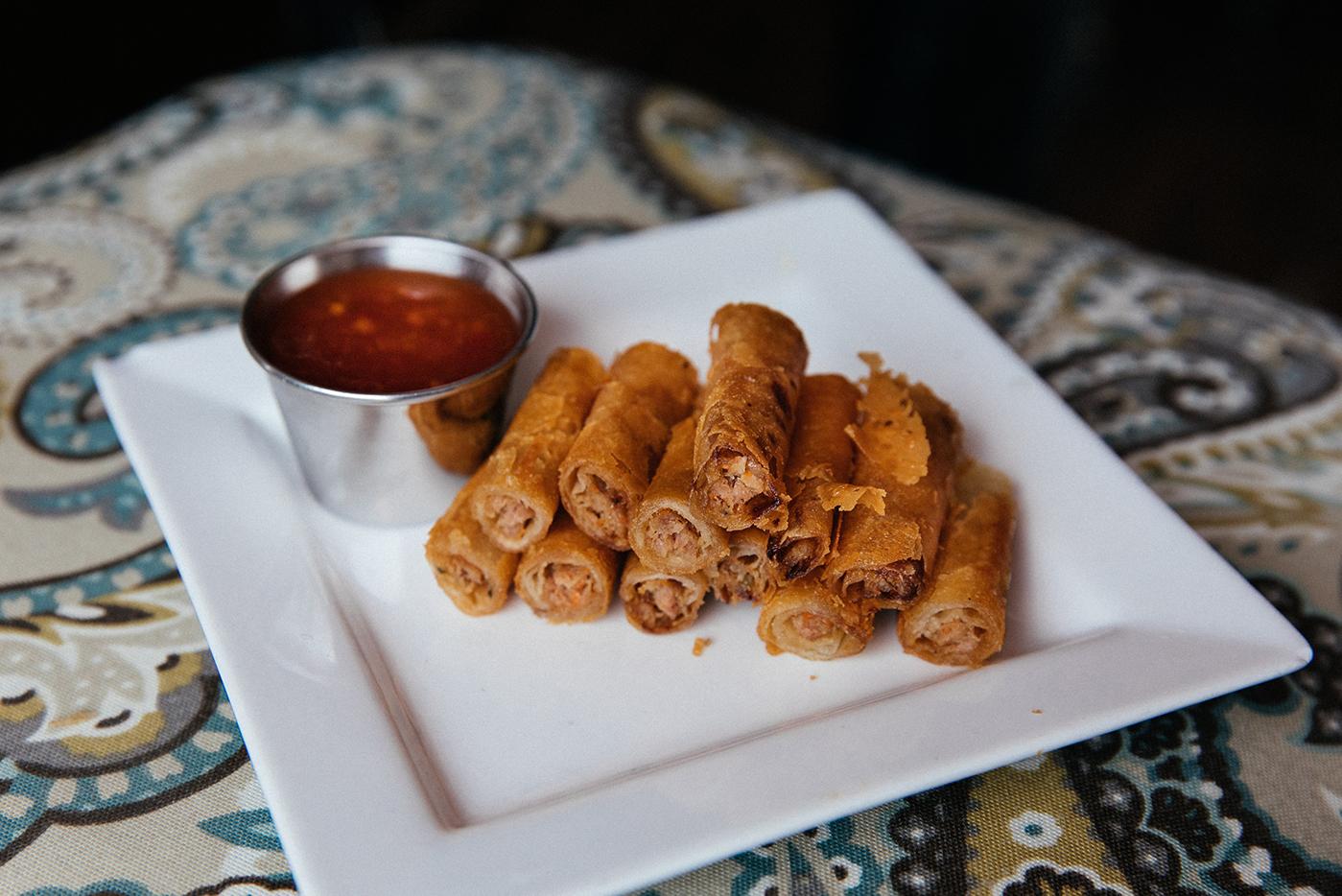 Espiritu’s parents came to Chicago in the 1970s. His mother is from Compostela, outside the city of Cebu, while his father is from Naujan on the island of Mindoro, just south of Manila. “It’s a story that’s not too uncommon for Filipino folks at that time: they eloped and wanted to get away from the Philippines,” Espiritu explains. His father worked in the arts, his mother in healthcare. Ray was born in the Lincoln Square area, near Albany Park and North Center, and has since moved back to be close to the restaurant.

Espiritu has visited the Philippines numerous times, although he says he’s “long overdue” for another trip there. His restaurant serves as both a gathering and gallery space for Filipinos in Chicago. While his own output of art is mostly restricted to drawings for himself these days (he used to paint more, and is also involved in WildClaw Theatre), the art on the walls of Isla is by Filipino-American friends of his. “We try to publicize,” he says. “We love what they do, so we try to tell folks when they ask all about the artist.”

And, although the restaurant attracts a diverse clientele, Espiritu says that, “we definitely get a lot of Filipinos here, thankfully, especially on Sundays.” Chio-Lauri, who has never been to the restaurant, writes that, based on their menu, Isla’s food is “more home-style and traditional,” and “seems varied enough to fix most of any Filipino’s hankerings for the food they grew up eating.” 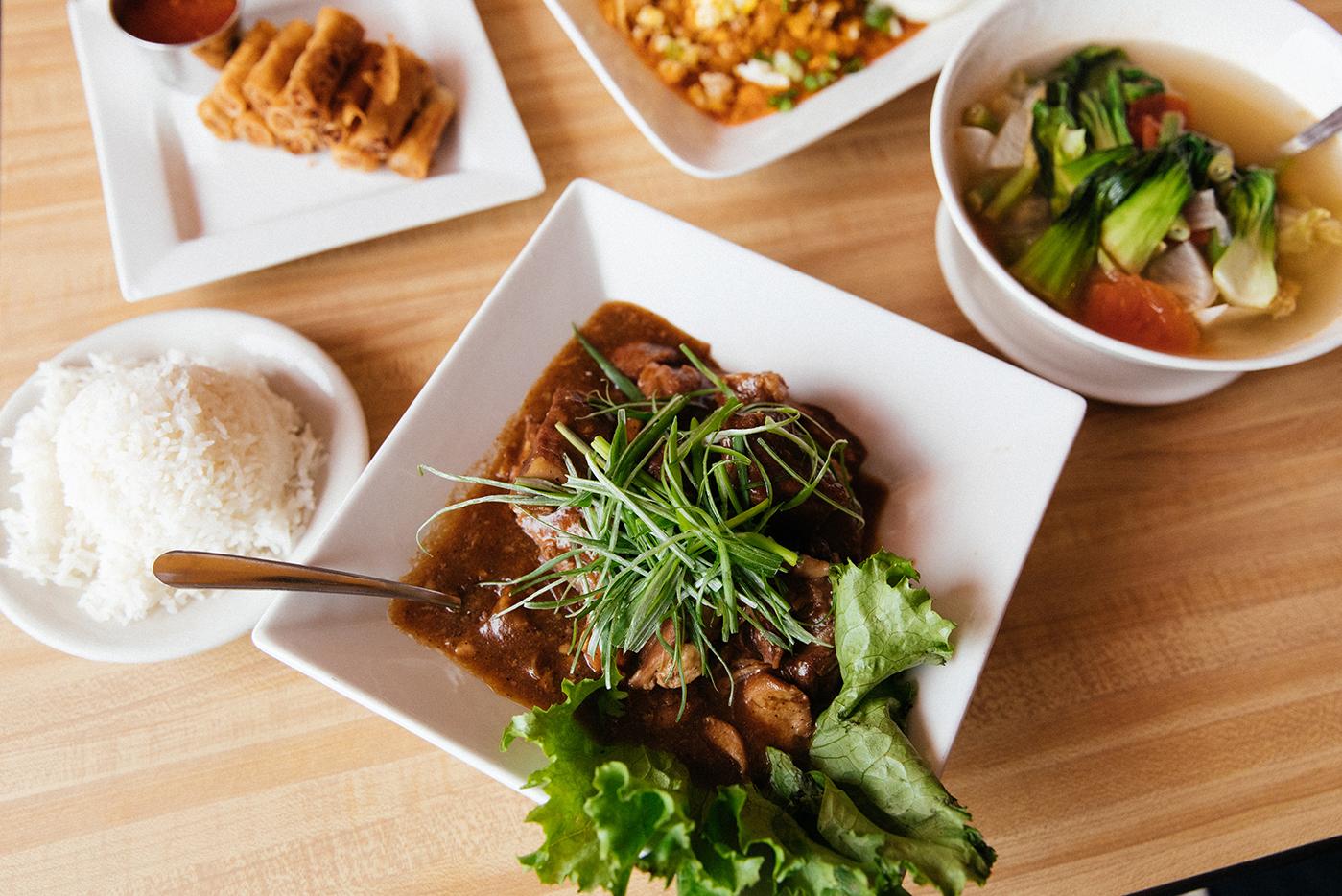 Adobo's name comes from Spanish, but it is a native Filipino method of preparing meat. Sinigang, the "one dish that is most representative of the cuisine, is in the top right. Photo: Sandy Noto for WTTW

With the caveat that Filipino food “is a very diverse, complex, and still-evolving cuisine,” Chio-Lauri says that you can “expect each bite to pack a punch of flavors” in dishes served by restaurants like Isla. “At least two or three bold tastes compete,” she continues. “Often sweetness counters saltiness or sourness, or sourness counters umami, pungency, and savor.” Sinigang, a vegetable, meat, and seafood soup soured with tamarind or other fruits, which Chio-Lauri calls the “one dish that is most representative of the cuisine,” is a perfect example, simultaneously tart and sweet, savory and funky.

Filipino cuisine is “a combination of the history of trade routes and colonization,” Espiritu says, adding that it includes “Spanish influence, Chinese influence, even American influence,” in addition to native traditions. Fried chicken served with banana ketchup, and spaghetti with a sweet tomato sauce containing hot dogs, ground beef, and pork are two popular dishes that came from America but have been “Filipinized,” in Chio-Lauri’s coinage. (Both dishes are served at Jollibee, a Filipino fast food chain whose massive lines at the opening of its first Chicagoland location in Skokie, in 2016, are more evidence of the hunger for Filipino food in America.)

Chinese merchants brought pancit, “an umbrella term for long strands of noodle dishes,” in the words of Chio-Lauri, to the Philippines. It is now a celebratory food, its lengthy noodles signifying a long, healthy life. Adobo got its name from Spanish and soy sauce from Chinese traders, but is a native method of cooking that predates contact with either group. The drinking food sisig emerged out of an opportunity offered by the particularities of American taste. Conceived in the 1970s by a woman named Aling Lucing as a way to use up pig heads thrown away by the cooks at a U.S. air base , it features flavorful parts of a pig head chopped up and served in a sizzling-hot cast iron dish, often with an egg mixed in. 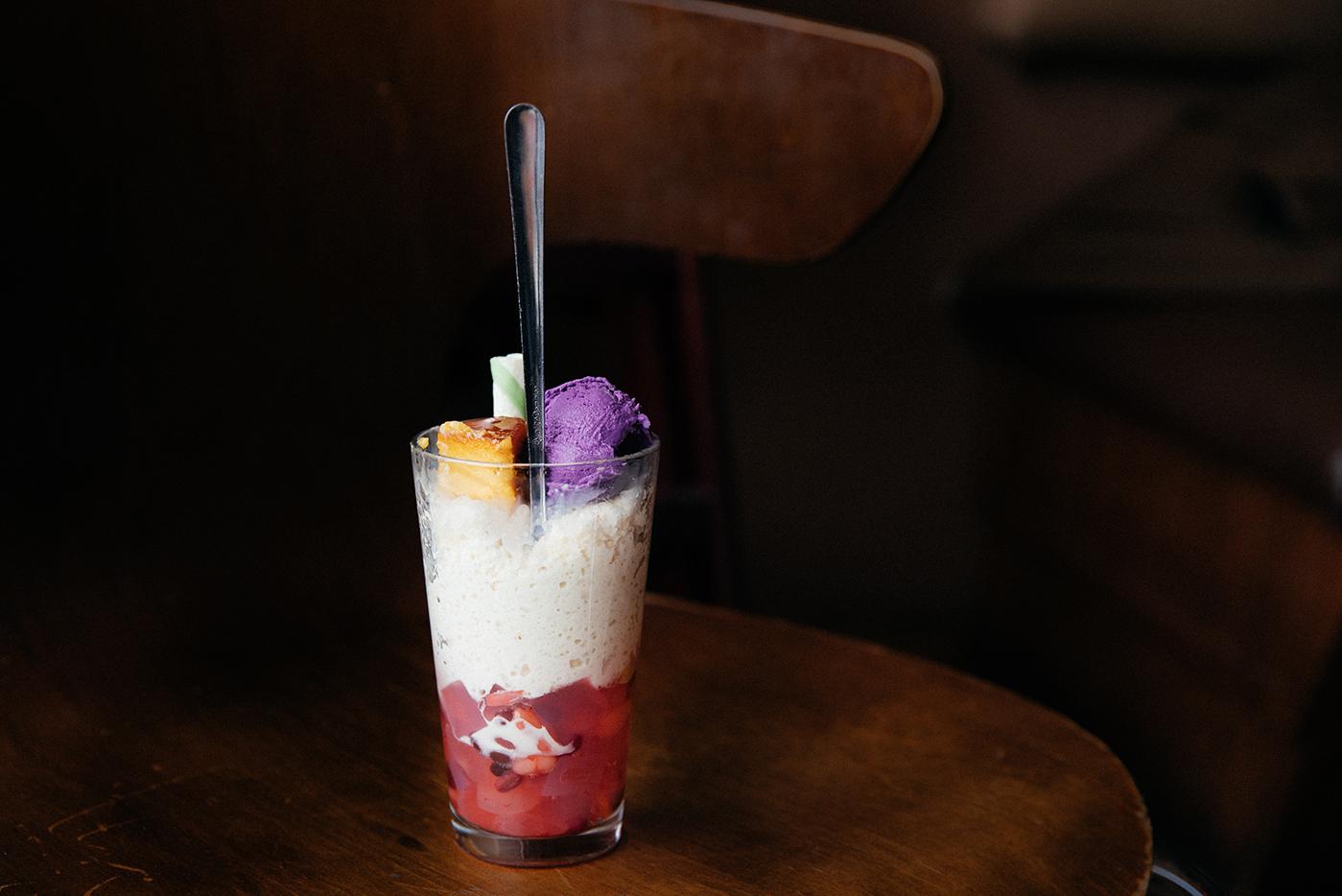 Halo-halo was inspired by a shaved-ice dessert brought to the Philippines by Japanese migrants. Photo: Sandy Noto for WTTW

Filipino cuisine is clearly unique, an endlessly inventive combination of native techniques and ingredients with foreign flavors that could only emerge on this collection of more than 7,500 disparate islands. That melding of diverse influences is made colorfully visible in halo-halo, a dessert inspired by a sweet shaved ice and milk dish brought to the Philippines by Japanese migrants, according to Chio-Lauri, while the introduction of ice by Americans allowed for its creation. All sorts of delectable treats are added to the ice, from candied native fruits and beans to brilliant ube (purple yam) ice cream to chunks of Spanish-originated flan. Halo-halo translates to “mix-mix,” which is exactly what you do, creating a vibrant, refreshing slurry.

Like the paintings on the walls of Isla Pilipina, it’s another eye-catching thing to draw you into the restaurant and the delicious Filipino food offered by Espiritu and Nunez.