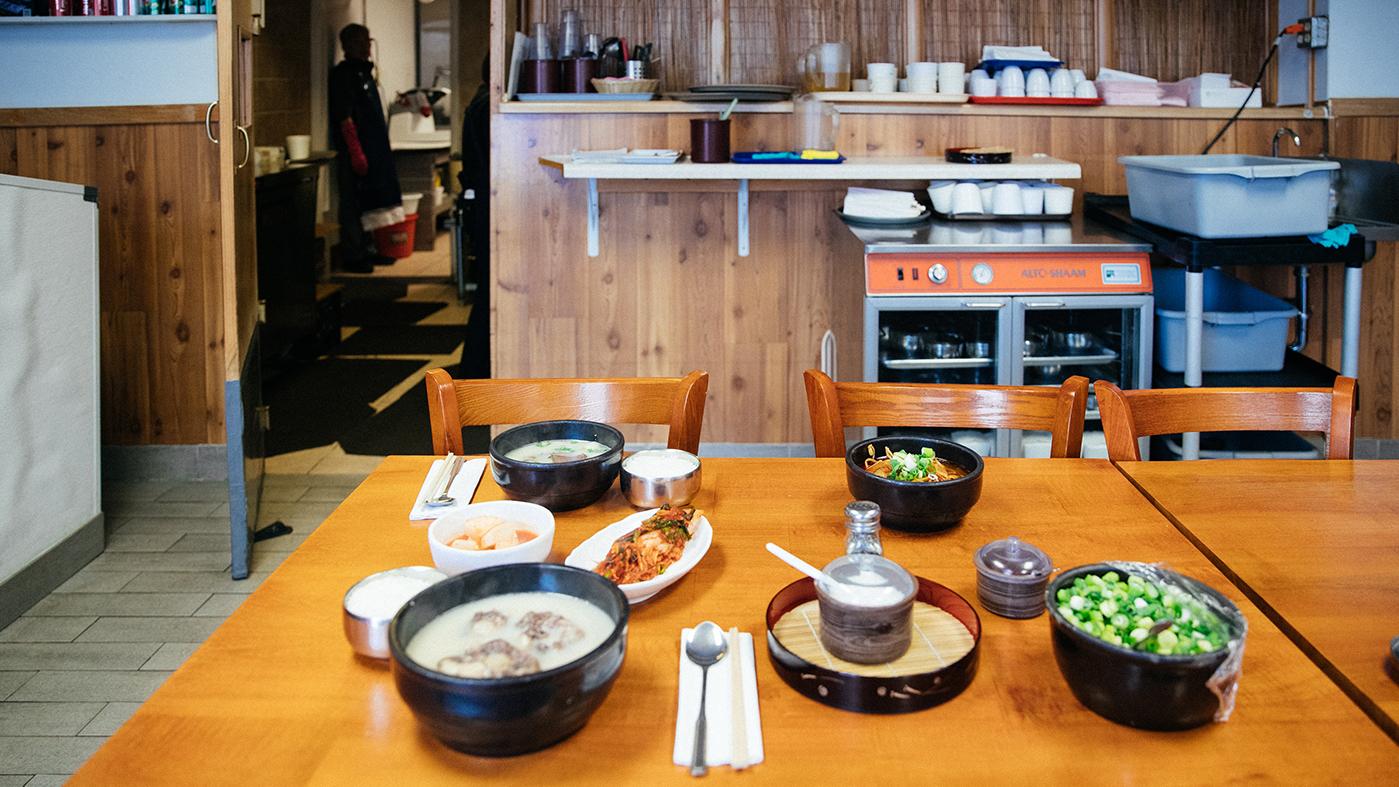 “There are very few places in the United States that have comparable food,” says Charlie Lee, an owner of Han Bat. Photo: Sandy Noto for WTTW

Find stories about some of Han Bat’s neighboring restaurants and information about a food tour at wttw.com/nopassportrequired.

Han Bat is an example of a type of restaurant common in many parts of the world but increasingly rare in the United States: a specialty shop that does one thing, extremely well. Its focus is so narrow because of the time and effort it takes to prepare its chosen dish: seolleongtang can’t be rushed.

“We’re in an ongoing process of making it all the time,” says Seok Hee (Charlie) Lee, one of the owners of Han Bat (2723 W. Lawrence Avenue, cash-only). “Basically, the soup starts from beef bones, and you’re boiling and boiling, and on top of that you have to put meat to boil it. We add concentrations, keep on adding them up, so we have four big pots going non-stop.” Even overnight? “That you can’t do,” he says, laughing.

“It’s definitely a long process,” writes Beverly Kim, a James Beard Award-winning chef known for her modern Korean-American food at Parachute in Chicago, in an email. “You have to boil it long enough that the calcium comes out of the bones and emulsifies in the broth to create this milky stock. We’ve made something similar in Parachute, with hand-torn dumpling noodles and bone marrow – it was very labor-intensive!” 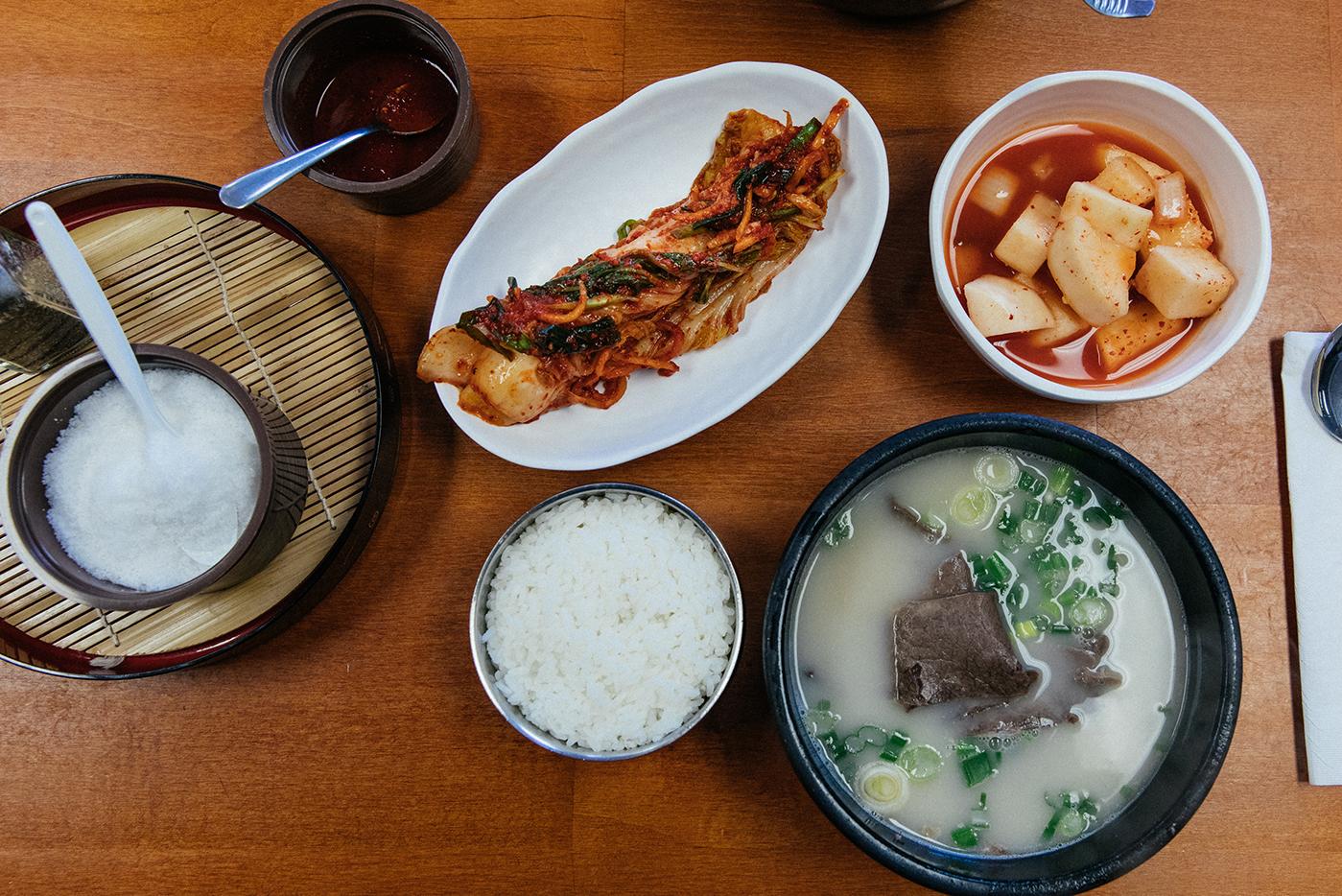 Seolleongtang (pictured with brisket) is a milky soup made from boiling beef bones for long periods of time, and flavored to taste with garnishes such as salt, kimchi, pickled radishes, and green onions. Photo: Sandy Noto for WTTW

“It’s simple but rich in flavor,” writes Kim. “I grew up with this being a comfort food… My mom would make it sometimes and my dad would take me out to a Korean restaurant as a kid on the way home from church in K-town on Lawrence.”

On its own, the broth is mild but decadent; you season it to your own taste with salt and chopped green onions. Chile paste is on hand, but you can also get a zing of spice from house-made kimchi or kkakdugi (chunky radish pickles). Lee recommends pouring some of the tart radish liquid into the soup, and offers a small side dish with soy sauce and wasabi to dip your meat in. There’s also a bowl of rice for you to eat with the broth. (“Seolleongtang needs to be eaten with kimchi on the side and rice as a complete meal,” writes Kim.) 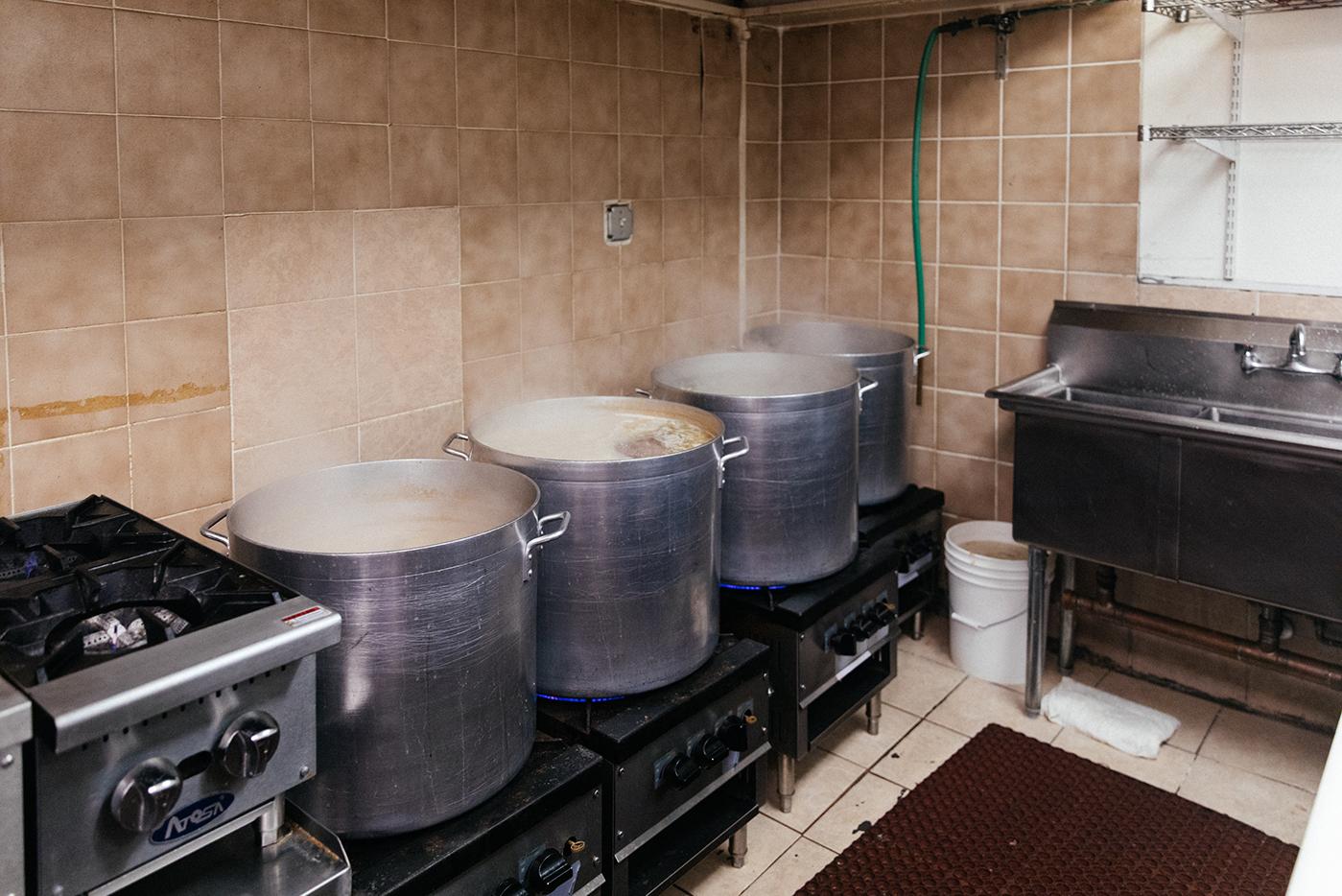 "We're in an ongoing process of making it all the time," says Lee about Han Bat's seolleongtang. Photo: Sandy Noto for WTTW

And that’s it. Han Bat also serves soo yook, thin slices of boiled beef beautifully fanned out on a hot plate, as well as a mildly spicy soup. That’s the extent of the menu.

But even that’s more than what is offered at Han Bat’s parent restaurant in Los Angeles. At that city’s Han Bat Sul Lung Tang, there’s no spicy soup. Your options are seolleongtang or soo yook.

In Los Angeles, which has the largest Korean population of any city in the United States, there are several places that serve proper, fresh seolleongtang. In the Chicago area, Lee claims that Han Bat is the only one.

“There are very few places in the United States that have comparable food,” he says. He was born in Korea but moved with his family to Montreal before coming to Chicago a couple of decades ago. “If you go to Korean restaurants, they will have seolleongtang, but it’s not the same kind of thing—the reason being that it is pre-prepared and frozen. When you order seolleongtang, they will take it out, thaw it, and bring it to you, and that has some difference flavorwise. Also, we have other parts of the beef that go into it and bring up the flavor, where most other places have only one kind, brisket.” 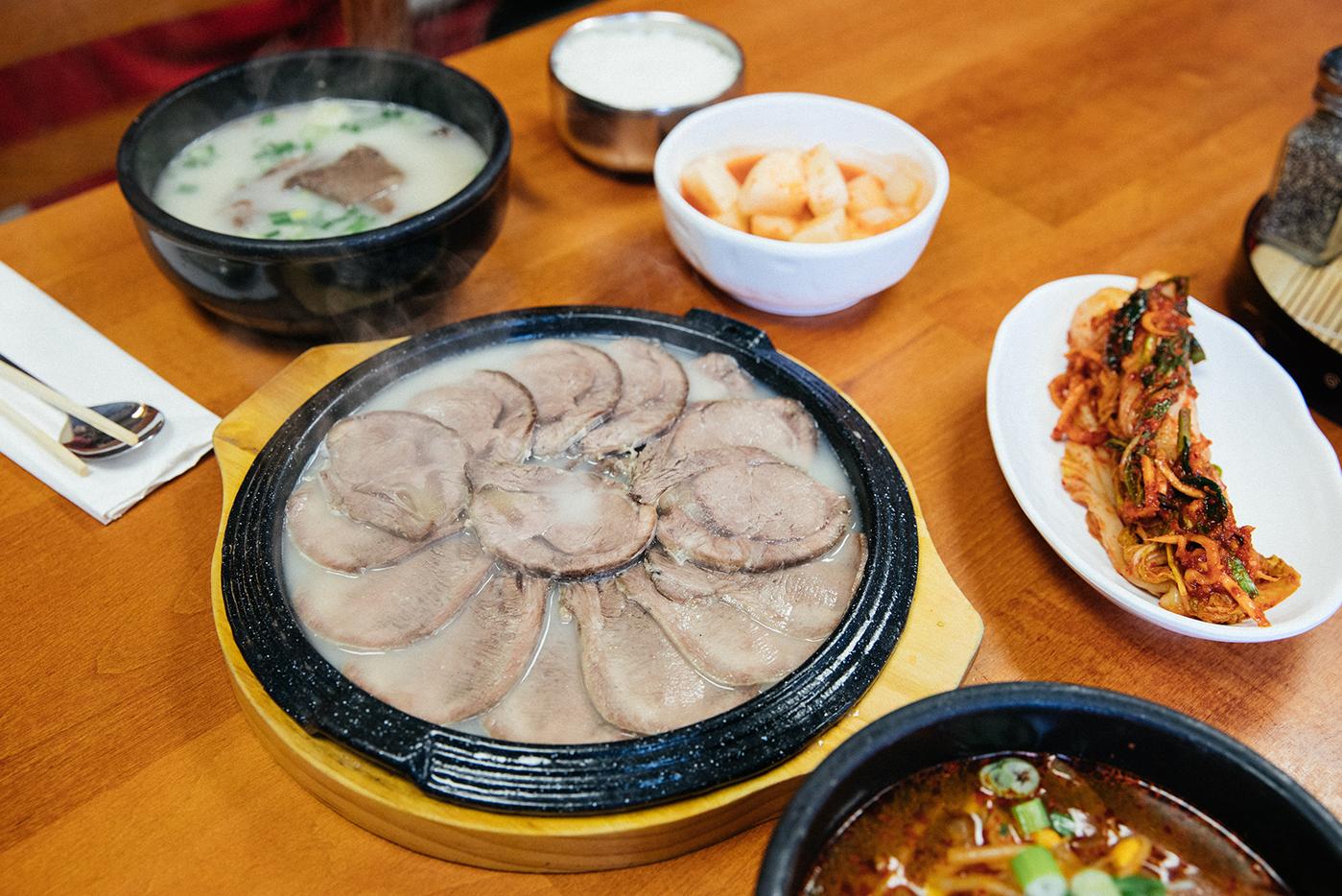 In addition to seolleongtang, the only other things Han Bat offers are soo yook (center) and a spicier soup (bottom right). Photo: Sandy Noto for WTTW

About twenty years ago, a member of the family who ran LA’s Han Bat opened an outpost here in Chicago. The West Coast iteration, which is still a well-regarded standout in LA’s Koreatown, was opened decades ago by someone who had run a restaurant in Korea. Lee’s business partner knew that original owner, and decided to buy the Chicago restaurant along with Lee a few years after it opened.

That was right around the time when the center of Chicago’s Korean population began shifting from the northwest side of the city to the northwestern suburbs of Niles, Arlington Heights, Morton Grove, and Glenview. (Kim herself grew up in the western suburbs.) In the 1980s, Albany Park and some of its adjacent neighborhoods became known as Koreatown for the high concentration of Koreans and Korean-owned businesses there. Koreans played a vital role in revitalizing the area, which had declined in the previous decade due to suburban outmigration: the number of Korean-owned businesses there ballooned from approximately 30 in 1978 to 428 in 1991. Lawrence Avenue – on which Han Bat is located, in Lincoln Square – became a main commercial strip.

But in the late 1990s, Chicago’s Korean population began leaving for the suburbs, establishing restaurants and businesses there. When the Korean supermarket chain H-Mart opened its first location in the Chicago area in 2006, it was in Niles. Joong Boo, the only remaining Korean market in the city aside from a new downtown H-Mart focusing more on prepared food, recently opened a location in Glenview. Earlier this year, when the Chicago Tribune released a guide to some of Chicagoland’s best Korean food, it focused on the “New Koreatown” in the suburbs. 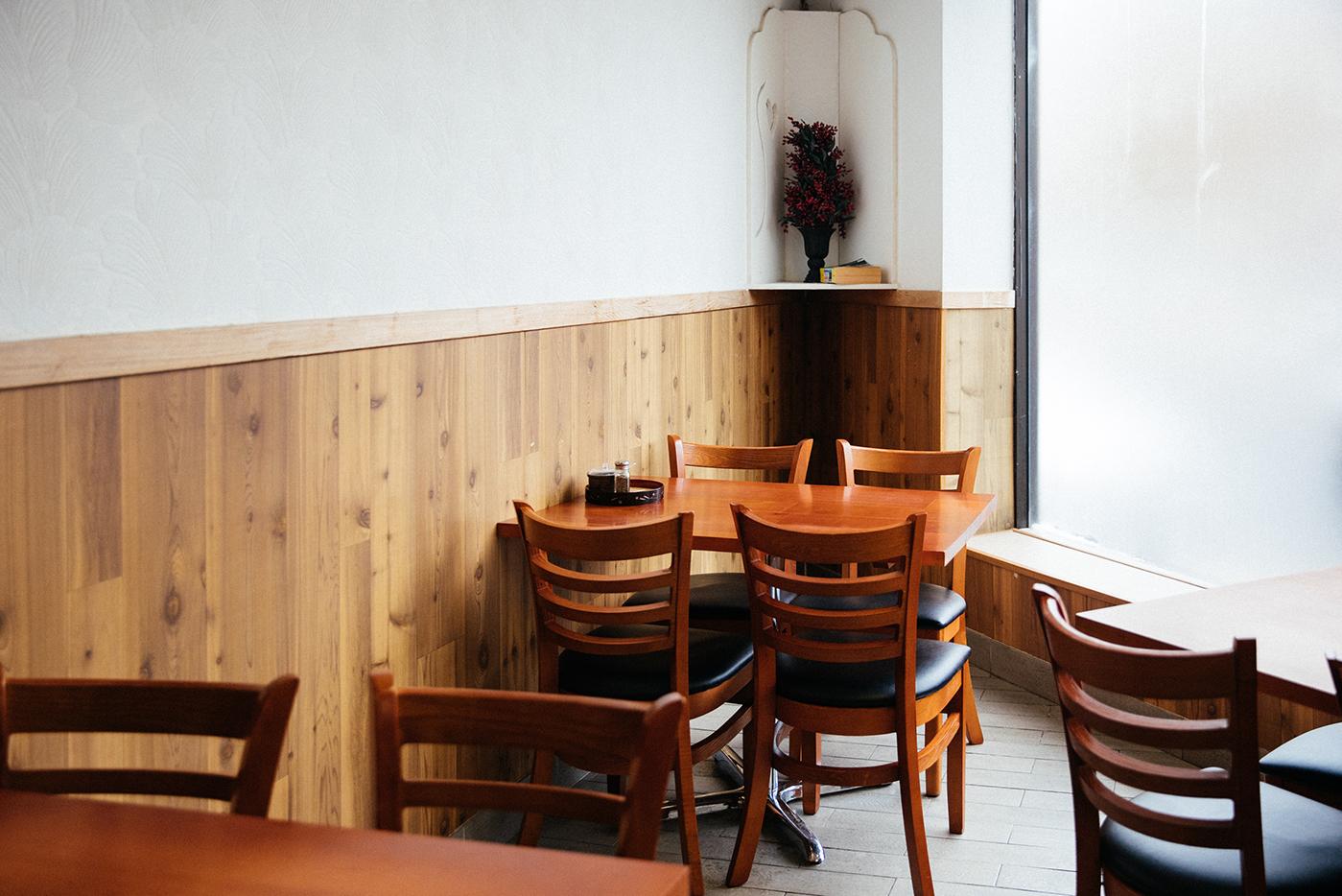 Han Bat is located on Lawrence Avenue in Lincoln Square, in an area once known as Koreatown. Photo: Sandy Noto for WTTW

“We are far away from the Korean community, but they come [to Han Bat] from all over,” says Lee. “When they come to visit Chicago, they come over here, because we’re known among the Korean restaurants, and we are the only one who does this kind of food.”

Kim writes that seolleongtang is “a special event soup, because it takes so long to make it. It’s the kind of soup your family goes out to order.” Han Bat serves “authentic seolleongtang, like what I’ve tried in Korea,” she continues. “It’s their main focus, so they aim to make it the best! In Korea, I find that most traditional restaurants work this way.”

Seolleongtang became a popular street food in Korea in the early part of the twentieth century, during Japanese occupation, according to a digital feature in the Michelin Guide Seoul. “Because its primary ingredient is bones, not meat, seolleongtang has always been a cheap peasant food,” the Guide notes. “It is precisely because of its affordability and its rich nutrient content that seolleongtang became such a popular street food in times of scarcity.” 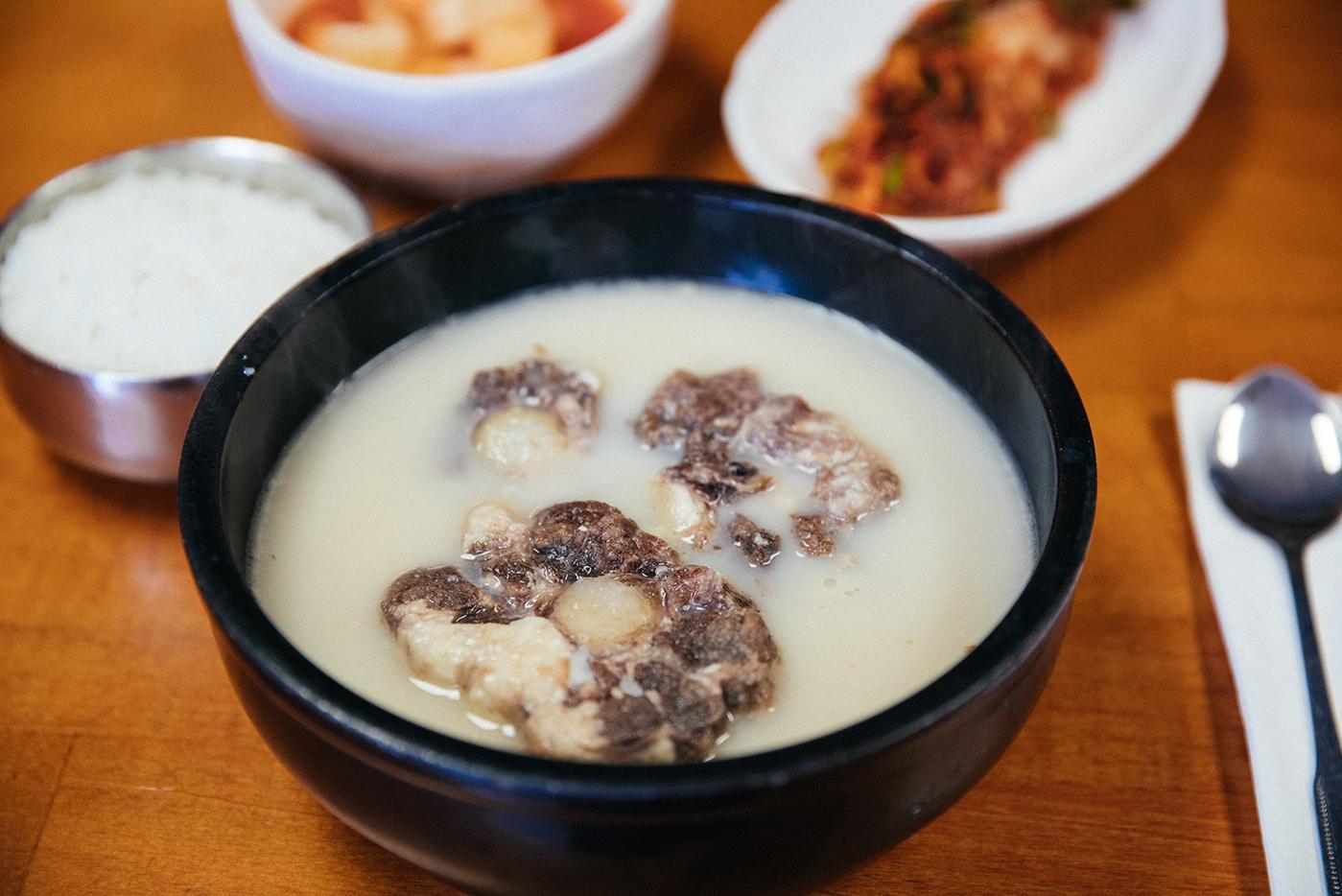 “The tailbone is the best meat, the most tasty,” says Lee. Photo: Sandy Noto for WTTW

Legend has it that the soup originated from an annual spring ritual in which the king would boil a cow into a soup to be shared among all who had attended the rite. A more plausible explanation, supported by scholars, is that the soup came from the Mongols, who may have boiled livestock in capacious pots to create a filling soup that could feed their large armies.

Now seolleongtang sates everyone from health-conscious devotees of Gwyneth Paltrow’s wellness site Goop to hard-partying karaoke-goers – almost everything you read about it mentions that it’s great for hangovers. At Han Bat, there’s a young girl who Lee says comes all the time for lunch. “She’s not Korean, but she loves the food,” he says with a fond smile. “Our best customer—she drags her mom here.” She may not be a Mongol warrior or an attendee at an ancient ritual, but she sure enjoys the seolleongtang.