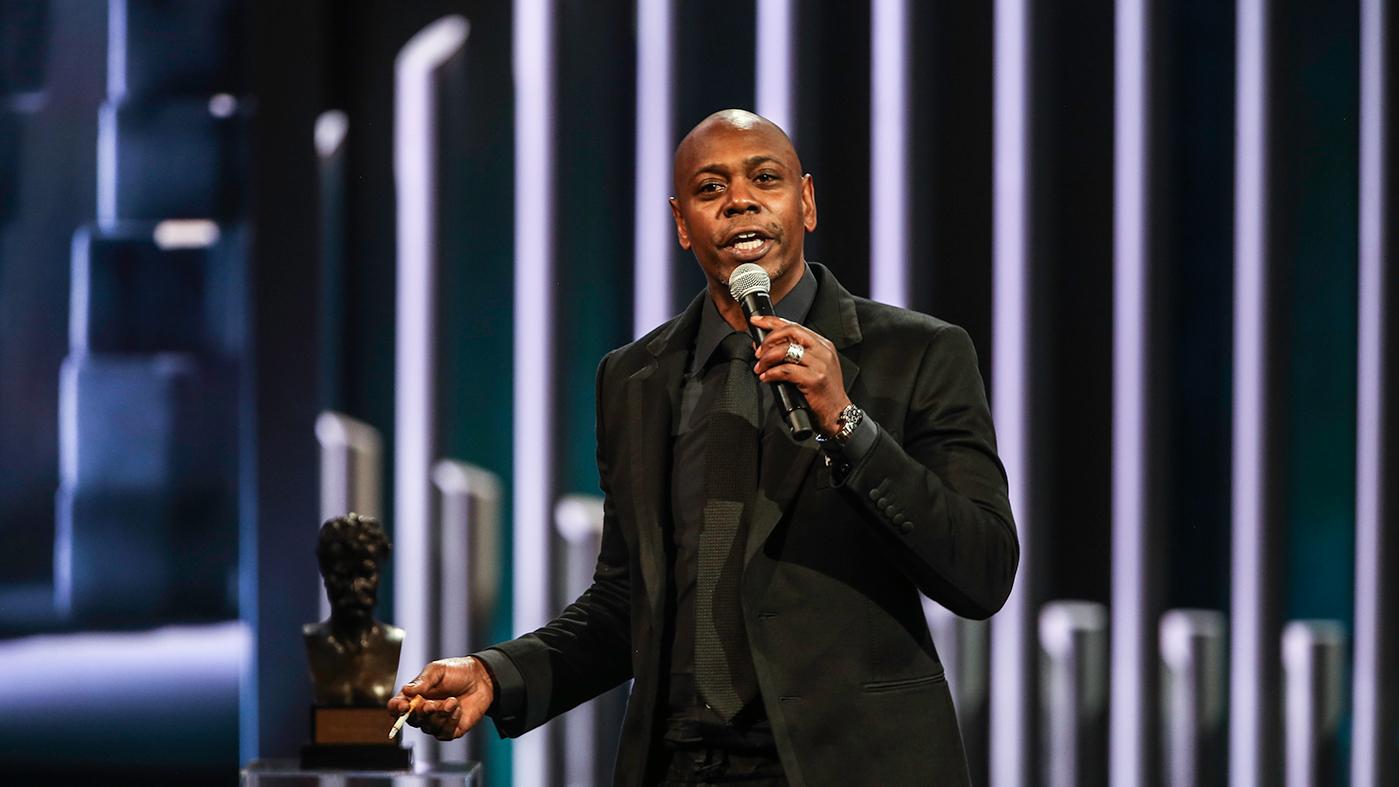 Dave Chappelle: The Mark Twain Prize is available to stream.

For the past twenty-two years, some of America’s funniest people have congregated annually to celebrate one of their own, at the ceremony presenting the Kennedy Center Mark Twain Prize for American Humor. In 2019, the Prize went to Dave Chappelle, whose award-winning The Chappelle Show was one of the highest rated programs on Comedy Central and whose recent Netflix stand-up specials brought him back to the spotlight.

Here’s a look back at the company Chappelle has now joined as a recipient of the Mark Twain Prize.

Pryor, who died in 2005, is one of the most important stand-up comedians ever, topping both Comedy Central’s and Rolling Stone’s lists of the best stand-up comics of all time. Take Dave Chappelle’s word for it: “You know those, like, evolution charts of man?” he said on an episode of Inside the Actors Studio. “He was the dude walking upright. Richard was the highest evolution of comedy.”

“I couldn’t wait for success, so I went ahead without it,” Winters, who died in 2013, once said. Not that he wasn’t successful—he holds comedy albums, TV show and film roles, and even artwork and books to his name—but he is perhaps one of the lesser known winners of the Twain Prize. His impersonation-filled, improvisatory comedy inspired at least a few later Twain Prize recipients: Billy Crystal, Lily Tomlin, Steve Martin.

Reiner’s influence crosses generations: he was an instrumental part of early TV comedy shows like Your Show of Shows, continued on with The Dick Van Dyke Show, directed such Steve Martin vehicles The Jerk, and appeared in his later years in films like the Ocean’s franchise.

Very few people have won an Emmy, Grammy, Oscar, and Tony (an EGOT)—Goldberg is one of them. She’s one of the more versatile Twain Prize recipients, known not only for her comedy but also for her dramatic roles (in The Color Purple and Ghost, for instance), her theatre career, and her time as a co-host of the talk show The View.

Newhart first made waves as a stand-up comic but is perhaps best-known for his two titular sitcoms, the 1970s’ The Bob Newhart Show and the 1980s’ Newhart. Younger generations love him for his role as Papa Elf in the 2003 film Elf, which stars another Twain Prize recipient, Will Ferrell.

Tomlin has long been a beloved cult figure, ever since her beginnings as a stand-up comedian and performer known for her oddball, caricatured characters. She’s just an Oscar short of an EGOT, having won Emmys, a Grammy, and Tonys. Unlike many of the Twain Prize recipients, she has performed a lot on stage, as well as in films and TV shows, including her current run alongside Jane Fonda in Netflix’s Grace and Frankie. She’s also one of only a few Twain Prize recipients who have also received Kennedy Center Honors.

Michaels is the lone Twain Prize recipient who has made his impact as a producer (he’s also the only recipient not born in the United States, as a Canadian). He’s the legendary impresario behind Saturday Night Live, as well as many of the shows created by its stars: 30 Rock (created by fellow-Twain Prize recipient Tina Fey), Portlandia, Documantary Now!, and various late-night shows.

Martin has had a diverse career, having made his impact in comedy earlier on before moving on to such interests as the banjo, acting, and writing children’s books, novels, and plays. He began his career as a writer for The Smothers Comedy Hour and then became known for his ironic, unusual stand-up, guest appearances on shows like The Tonight Show and Saturday Night Live, and roles in movies like the fellow Twain Prize recipient Carl Reiner-directed The Jerk (which Martin co-wrote). SHe’s also one of only a few Twain Prize recipients who have also received Kennedy Center Honors.

While other Twain prize recipients have written plays, Simon, who died in 2018, is the only one who is well-known for it and made play-writing a substantial part of his career—he even has a theater in New York named after him. One of the most famous, The Odd Couple, also became a movie, and Simon was equally successful as a screenwriter. He received more Oscar and Tony nominations than any other writer. He’s also one of only a few Twain Prize recipients who have also received Kennedy Center Honors.

Crystal is probably best-known as an actor, starting on TV sitcoms and Saturday Night Live and then appearing in numerous hit films, from The Princess Bride to When Harry Met Sally to Monsters, Inc.

Carlin died the same year he was named recipient of the Twain Prize, making him the only posthumous honoree. He was a stand-up comedian just as influential as Richard Pryor (he placed just behind Pryor in Rolling Stone’s best stand-ups of all time list), known for his philosophical and controversial acts, including the infamous “seven dirty words,” which became a central part of a Supreme Court ruling on regulation of the broadcasting of “indecency.”

Cosby, famous for his stand-up and pioneering sitcom The Cosby Show, had his Twain Prize rescinded in 2018 after more than 60 women accused him of attempted sexual assault or misconduct.

Fey is the youngest recipient of the Twain Prize, receiving it at the age of 40 (Chappelle isn’t far behind, receiving his at 46). She followed a common trajectory, from Chicago’s Second City to Saturday Night Live, then created and starred in the popular and influential sitcom 30 Rock (also produced by Twain Prize-recipient Lorne Michaels). She’s also behind the show Unbreakable Kimmy Schmidt, the film Mean Girls, and her popular memoir Bossypants.

Ferrell is another Twain Prize recipient who broke through on Lorne Michaels’ Saturday Night Live. He then appeared in a string of popular and always-quoted movies as a series of zany, iconic characters, in Anchorman, Talladega Nights, Old School, Elf, and others. He also launched the comedy website Funny or Die.

While DeGeneres is now a long-time talk show host (she has won more People’s Choice Awards than anyone else), she honed her skills as a stand-up comic and then moved into acting, starring in two sitcoms named after her. She came out as a lesbian in 1997 and has since been a prominent member of the LGBT community in the pop culture world.

Ellen DeGeneres has cited Burnett as one of her main influences, and DeGeneres is far from the only person impacted by the pioneering Burnett. The Carol Burnett Show, which began airing in 1967, was the first variety show of its kind hosted by a woman. She was also lauded in theatre and film roles, for her iconic characters, and for memoirs. She has been awarded the Presidential Medal of Freedom, and is also one of only a few Twain Prize recipients who have also received Kennedy Center Honors.

Leno was the first Twain Prize recipient best-known for hosting a late-night show. He also made many appearances on late-night shows as a stand-up before succeeding Johnny Carson as host in 1992.

Murphy is another Twain Prize recipient who first gained fame on Lorne Michaels’ Saturday Night Live. Known on that show for zany characters, he also is extremely well-regarded as a stand-up comedian. And he has had a very successful film career, as both an actor and a voice actor.

Chicagoland’s own Bill Murray was one of the early stars of Lorne Michaels’ Saturday Night Live, distinguishing himself with his deadpan jokes. Like many others, he then moved into film, starring in such comedy classics as Caddyshack, Groundhog Day, and Ghostbusters before moving into dramatic roles, as in Lost in Translation and several Wes Anderson films.

Letterman, like Leno, is best-known for being the host of a late-night show (he’s the longest-serving late-night host in TV history). He’s also one of only a few Twain Prize recipients who have also received Kennedy Center Honors.

Louis-Dreyfus, like Tina Fey and Bill Murray, began her career at Second City in Chicago and was quickly drafted onto Saturday Night Live, the youngest female cast member in the show’s history at the time. She appeared alongside other Twain Prize recipients like Billy Crystal and Eddie Murphy, then moved onto the blockbusting sitcom Seinfeld. More recently, she received plaudits as the star of the black comedy political satire Veep.