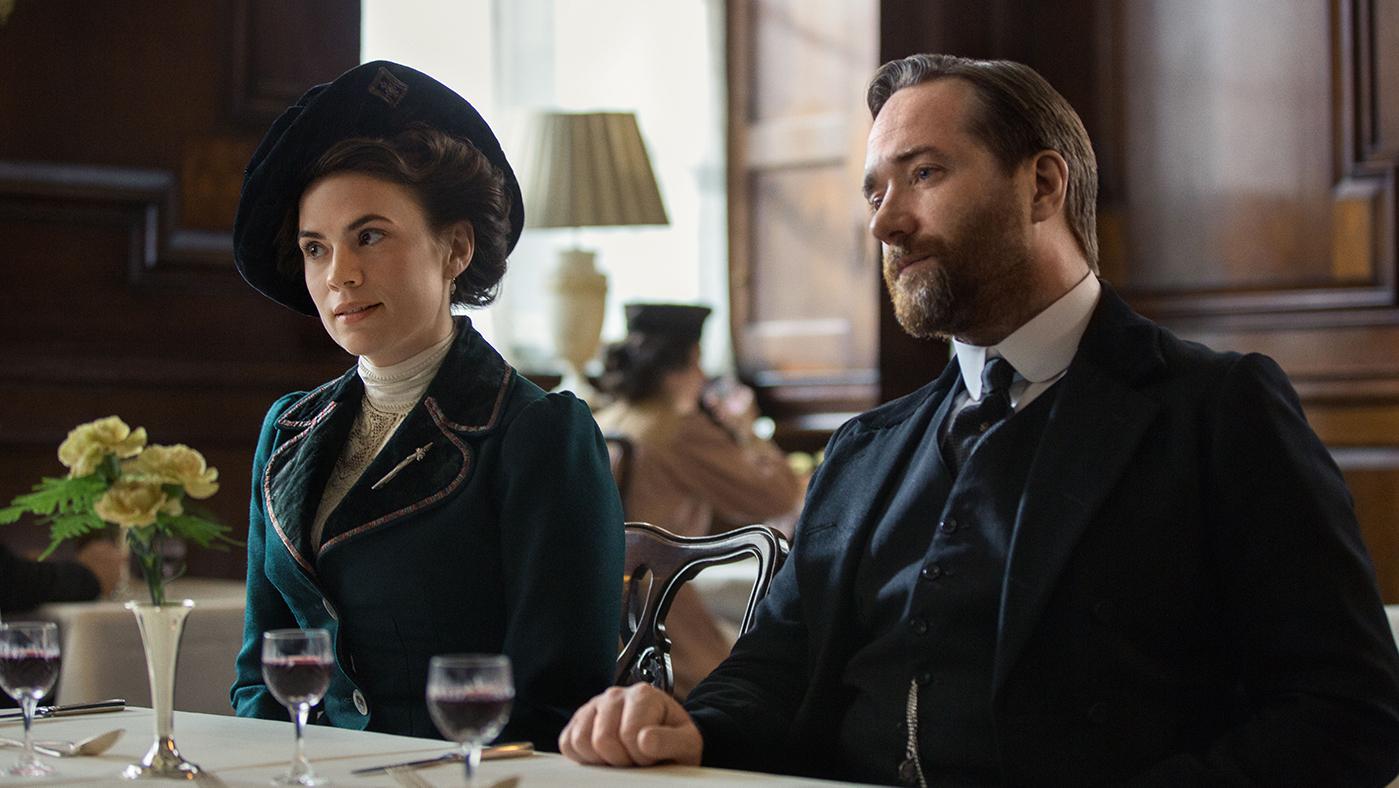 Margaret and Henry begin to draw closer in the wake of a tragedy. Photo: Starz Entertainment

Howards End airs Sundays at 7:00 pm and is available to stream. Recap the previous and following episodes.

It is a few weeks later. On a gray winter afternoon, a procession of mourners follow a coffin through a frost-covered cemetery. Ruth Wilcox’s evident fatigue masked a serious illness, and she has unexpectedly died. Henry Wilcox, Evie, Charles, his new wife Dolly, and most of the other attendees carry decorous bouquets of white blooms as further back in the crowd, Margaret walks alone, her arms filled with red and pink chrysanthemums. After the burial, she adds her bright flowers to the pale ones at the gravesite, and, as Henry’s family regards her with suspicion, offers her condolences to him. Henry is shell-shocked, but gracious.

At Howards End the next morning, Henry receives a letter from the matron of the hospital where Ruth was treated. Enclosed is a pencil-written note from Ruth herself: “My dear husband: I should like Miss Margaret Schlegel to have Howards End.” Henry shows the note to his children, who are predictably outraged, impugning Margaret’s character and suspecting her of having engineered the bequest. Henry defends Margaret, but departs with his newspaper, leaving the decision of what to do with Charles, who crumples the note and flings it into the fire as the others watch.

Back in London, Margaret and Tibby joyfully welcome Helen home from her long trip. Margaret and Helen discuss Ruth’s death and Henry’s subsequent kindness. “I like Mr. Wilcox,” Margaret admits; he has generously given her one of Ruth’s ornamental silver boxes. A few weeks later, as Margaret passes the Wilcoxes’ flat, she notices that they are moving out. Helen is indifferent.

Cut to Leonard Bast, toiling away at his desk; he is one of an army of clerks at the Porphyrion Fire Insurance Company. After closing time, he trudges home, where Jacky is still anxious for him to marry her. He will, he insists, when he is twenty-one, and implores her to stop nagging him. She doesn’t, and exasperated, he goes out for a very long walk in the country. In his absence, Jacky rifles through his things and discovers Margaret’s calling card in one of his books.

Margaret is brooding over a letter from the landlord: the lease will soon be up and they must find another place to live. Suddenly, a visitor arrives: it’s Jacky, frantic with worry – her “husband” never returned last night and she accuses the Schlegels of harboring him in their home. Helen and Margaret are baffled; they don’t remember Leonard, but Tibby refreshes their memory about the Beethoven concert and the man with his shabby umbrella. He makes a few snobbish assertions about Leonard. Jacky quickly realizes she has made a mistake, and she hurries away, mortified.

The next day, Leonard pays Margaret and Helen a visit to excuse Jacky’s behavior. Determined not to frighten him off this time, they kindly insist he stay for tea. He agrees, and is soon describing his all-night pastoral walk to a rapt audience. Helen is especially captivated by Leonard’s insights about nature, and Leonard is thrilled to find someone with whom he can discuss literature.

On a bench along the Thames, Henry Wilcox sits alone, contemplating an engraved cigarette case Ruth had given him. Walking away, he is pleased to happen upon the Schlegel sisters. During their lively discussion, the women describe their encounter with Leonard and ask for Henry’s thoughts on how to help him. Learning that Leonard works at the Porphyrion, Henry advises them that Leonard should resign “with all possible speed” as the company is on the verge of bankruptcy. As they move on to other topics, Henry mentions that Howards End has been rented to a tenant. As they part, Margaret casually suggests that he and Evie pay them a visit at Wickham Place before they have to move out.

That day, Helen writes to Leonard, again inviting him to tea. After hearing Henry’s advice, Leonard insists, with some vehemence, that they and Henry are wrong about the Porphyrion. But it’s clear he’s uneasy. Their meeting is unexpectedly interrupted by the boisterous arrival of Henry and Evie, who have brought two of the terrier puppies Evie has been breeding. In their excitement over the dogs, Helen and Margaret have quite forgotten Leonard, who gets up and leaves the room in a snit, vowing never to return. As he is waiting for his hat in the vestibule, he and Helen have it out—he thinks the sisters are toying with him, and this is confirmed in his mind by the insufferable Tibby, who rudely asks Helen if Leonard is their “social experiment.” Mortally offended, Leonard departs, and upstairs, Henry advises Margaret to steer clear of such men, who will surely take advantage of their goodheartedness. Margaret is getting a clear picture of Henry’s cynical nature – the polar opposite of hers. Helen is downcast after the argument with Leonard; Margaret urges her to forget about it and “play with puppies.”

After a tiring day of touring prospective houses with Helen, Margaret is surprised to receive a luncheon invitation from Evie and her fiancé, a Mr. Percy Carhill. Helen predicts that Evie is trying to fix up Margaret with Henry, and sure enough, Henry is at the luncheon, jovial and dressed to impress. Henry asks Margaret if she and Helen are “still worrying after their young clerk,” but Margaret replies that they are mostly worried about finding a place to live before their lease is up. Evie, thinking of Ruth's note that Charles burned, smilingly has no advice to offer. “Can’t you turn out your tenant and let us rent Howards End?” Margaret jokes as Evie blanches and points out that the tenant has a three-year lease. Henry looks at Margaret, considering.

Later, Margaret confides to Helen that she thinks Henry might be romantically interested in her. She decides to invite him out to lunch at a health food restaurant, dragging Tibby along as a chaperone. Tibby pronounces the food “ghastly,” but Henry professes not to mind, and goes out of his way to be open-minded and agreeable.

The next day, the family, with Aunt Juley, decides to take a break from house-hunting to go to the seaside for a month. Margaret receives a note from Henry: due to Evie’s marriage, he has decided to give up their latest London house and will let it to the Schlegels. Can she come and go over it with him right away? Helen accuses Margaret of being in love with Henry. Margaret denies it, but presses her siblings for a decision about renting the house. Should they? Helen and Tibby say yes. So, it’s decided.