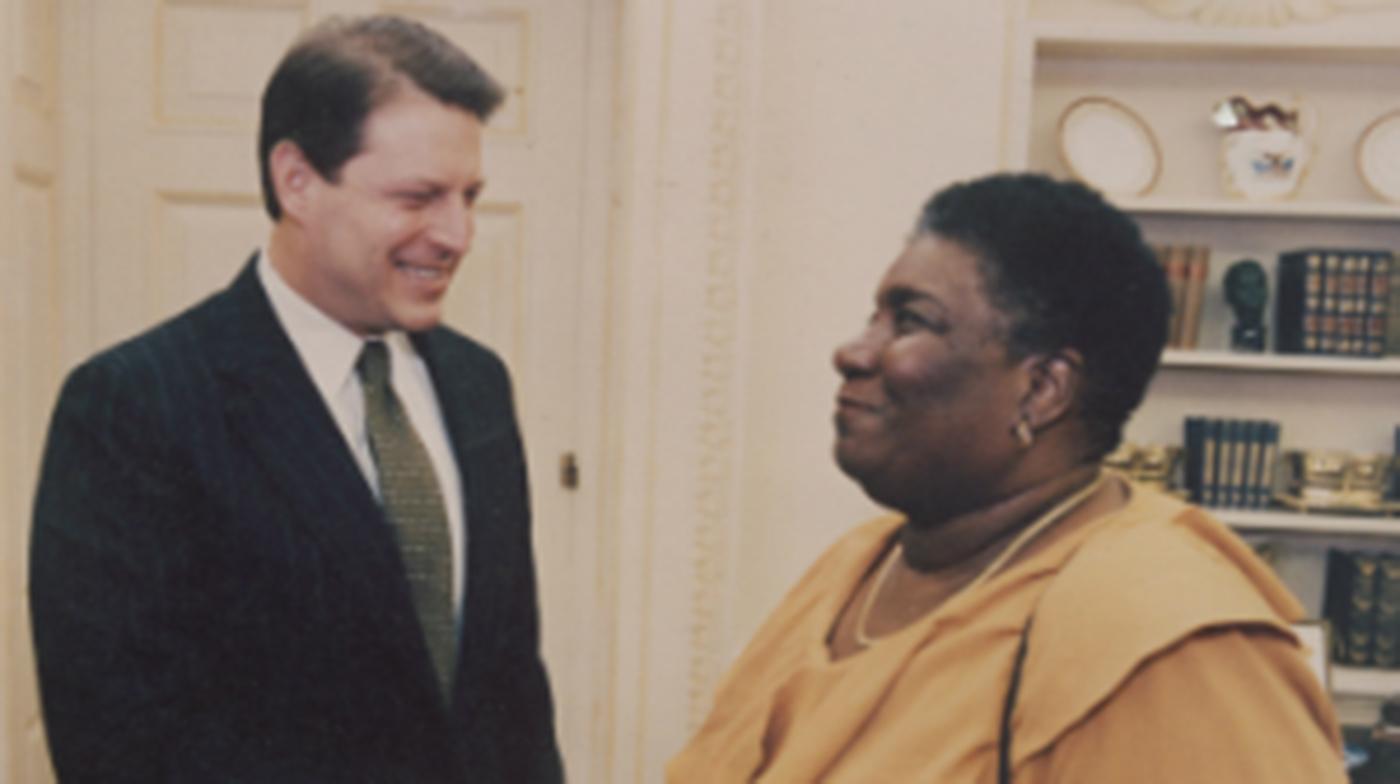 This story was originally published in February, 2020.

In the most recent Democratic presidential primary debate, Elizabeth Warren brought up environmental justice, saying that, “for generations now in this country, toxic waste dumps, polluting factories have been located in or near communities of color…and the consequences are felt, in the health of young African American babies, in the health of seniors, people with compromised immune systems.” She was speaking to a topic that had been brought to broader consciousness decades before, in large part due to the tireless efforts of one woman who lived in one of those polluted communities on the Southeast Side of Chicago. Her name was Hazel Johnson, and she is known as the “mother of environmental justice.”

Johnson first began to suspect there was something in the environment harmful to residents of her community of Altgeld Gardens when her husband died of lung cancer in 1969, at the age of 41. John Johnson smoked lightly, but Hazel didn’t think it was enough to kill him at such a young age. Later, four young girls died from cancer, and Johnson heard on TV that the area around Altgeld had the highest incidence of cancer in the city. (Johnson was born in an area of New Orleans that has been called “cancer alley,” and was the only one of four children to reach her first birthday.) She decided to investigate.

Conducting a survey of Altgeld residents in the early 1980s, she learned that almost everyone knew someone who had been struck with cancer between age 35 and 55. As a 2010 Chicago Tribune article about her work put it, residents “had become almost immune to the news of cancer.” Johnson learned that the Southeast Side of Chicago was surrounded by environmental hazards: some 50 landfills, more than 250 leaking underground storage tanks, industrial facilities venting chemicals into the air, incinerators, sewage treatment facilities, paint factories, cars emitting fumes as they passed by on the nearby highways. Johnson called the region a “toxic doughnut.”

“It’s like living in hell,” she said in a 1990 WTTW special about pollution on the Southeast Side:


Altgeld itself had been built on an old Pullman Palace Car Company dump, back in the 1940s. Overseen by the Chicago Housing Authority, it contained harmful asbestos—but the CHA denied that fact, until Johnson (working in part with a fresh-faced community organizer named Barack Obama) forced them to acknowledge and address the issue in the mid-1980s.

It was a pattern Johnson would run into over and over again: official negligence followed by denial, then—eventually, only as the result of unflagging work—steps to address a problem. When she raised concerns about environmental hazards at an Illinois Environmental Protection Agency meeting, she was sent complaint forms; when she got residents to fill them out, showing widespread health issues seeming to have been caused by air and water quality, and submitted them, she was told there was no proof of any health hazard in Altgeld Gardens. So she conducted a more formal survey showing the public health hazards with the help of the University of Illinois at Chicago School of health and the toxicologist Dr. Robert Ginsburg. It finally helped focus EPA attention on the polluted region.

“Every day, I complain, protest and object, but it takes such vigilance and activism to keep legislators on their toes and government accountable to the people on environmental issues,” Johnson told the Tribune in 1995.

Johnson did much of this work through People for Community Recovery (PCR), an organization she had founded in 1979 to advocate for repairs in Altgeld Gardens, but which soon shifted its focus to broader issues of environmental justice. When PCR officially incorporated in 1982, Johnson had recently lost a job. She devoted herself to the organization—despite the lack of a steady salary.

Organizing protests, Johnson prevented waste management companies from offloading into nearby landfills, got permits for landfills and waste lagoons revoked, and stopped more landfills or incinerators from opening. Johnson began traveling to work with other low-income communities of color around the country who were disproportionately affected by human-produced environmental hazards. In 1992, at the first National People of Color Environmental Leadership Summit in Washington, D.C., she was first called the “mother of the environmental justice movement.” 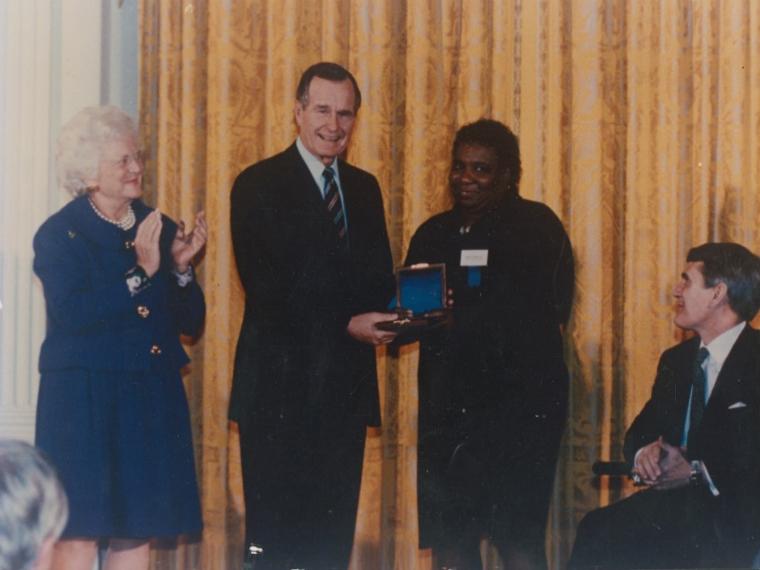 “For so long, environmental activism has been primarily a white, middle-class issue, far removed from the daily reality of inner-city life,” she told the Tribune in 1995. She often found she was the only non-white person at environmental conferences. “It’s all very well to embrace saving the rain forests and conserving endangered animal species, but such global initiatives don’t even begin to impact communities inhabited by people of color.”

In 1993, Johnson testified before Congress, and the following year she was part of a group of activists who worked to have President Bill Clinton sign an executive order on environmental justice, which sought to make government agencies take into account minority communities disproportionately exposed to pollution. Benjamin Chavis, the executive director of the NAACP at the time, told the Tribune that Johnson was a “leader in the new civil rights movement.”

Johnson continued advocating for environmental justice up to her death in 2011. Her daughter, Cheryl, who had left a job with Argonne National Laboratory to work with her mother, continues Johnson’s work through PCR, which now also helps low-income residents apply for federal energy assistance grants and trains them to become environmental remediation workers, helping to clean up contaminants.

Johnson died impoverished; she was buried in an unmarked grave, and Cheryl had to raise money to cover the burial expenses. The papers of PCR are now stored in the Chicago Public Library’s Vivian G. Harsh Research Collection of Afro-American History and Literature, a prominent collection used by researchers across the country. While work has been done to remediate the native wetlands of the Southeast Side and the Calumet region, which features a broad diversity of wildlife (the Chicago Park District has ambitious plans for the area), there are still concerns about industrial emissions and their effects on public health.

The work begun by Hazel Johnson continues, and, while she may have been unfairly forgotten, her legacy has not—and now it’s being discussed on national stages. Her warnings from decades ago are prescient and ever more pressing. “We have abused the planet mercilessly for years, and now we are paying the price,” she told the Tribune in 1995. “If we want a safe environment for our children and grandchildren, we must clean up our act, no matter how hard a task it might be.”