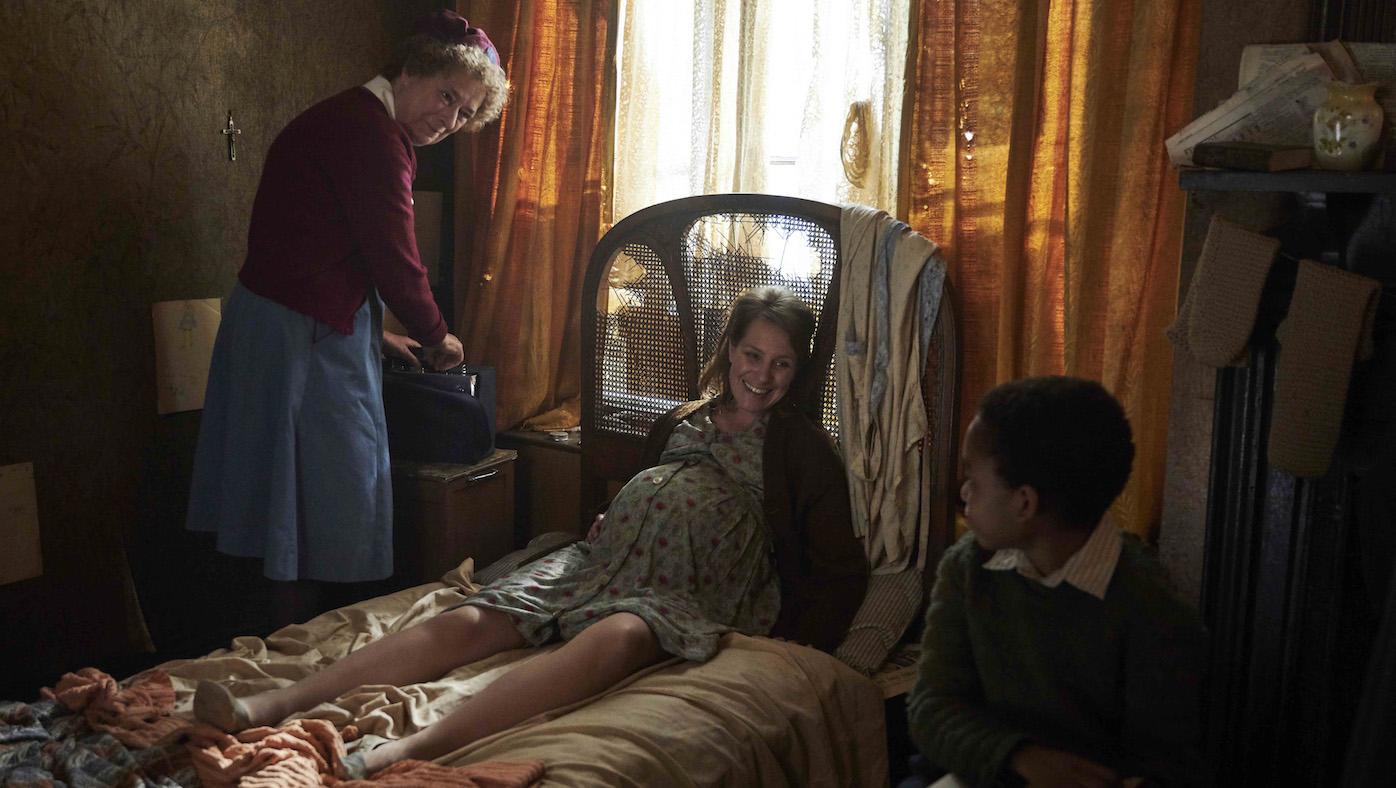 Nurse Crane is disgusted by the homeless shelter Dena is living in, and quickly secures Dena and her son a council flat. Photo: BBC / Neal Street Productions

Call the Midwife airs Sundays at 7:00 pm and is available to stream for a limited time. Recap this season’s holiday special and the following episode, and read recaps of the previous three seasons.

Winston Churchill has died at the impressive old age of 90, and the passing of such a hoary icon has everyone reflecting on the past. Fred has taken to looking at a photo of his deceased first wife, Betty, while Violet admits she also misses her late husband. Nurse Crane and Lucille seem to take a trip into the past when they visit a pregnant woman at a filthy homeless shelter full of bugs. Dena’s baby is due soon, but she’s busy for now preparing her bright son Terry for his school exams.

Disgusted by the welfare system’s failure to help Dena—she has been waiting seven months for a council flat to live in—Nurse Crane makes a stern phone call and gets Dena an apartment immediately.

The modern bureaucratic state may be an improvement over the past, but it can have other failings. Surveyors have been dispatched to Poplar in the name of “slum clearance,” and they inform Sister Julienne that Nonnatus House will probably be torn down soon.

That’s not the only future-minded thing happening around Nonnatus. Trixie has convinced Valerie and Lucille to enter a magazine competition for free, modern hosiery—all they have to do is send in a photograph of their legs.

But other things that seemed to have been consigned to the past, like the abandonment of babies and diphtheria, have returned. Sometimes new life is found in history’s dustbin—literally, in the case of the newborn Fred finds in a trashcan outside the maternity clinic.

The baby seems healthy enough, but it wasn’t delivered by a professional: its umbilical cord is tied with a purple piece of thread. Dr. Turner sends the infant to the hospital, in case of infection from the trashcan, but before she leaves, Sister Frances tells Fred he can name her. He names her Primrose: a flower that turns up in the cold.

When a woman turns up at the maternity clinic with clothes for Primrose—the baby’s appearance has been reported in the papers—Frances notes lactation stains on her blouse and that she knew Primrose was wrapped in a nightgown, a detail not reported by the press. But a phone call interrupts Frances and the woman disappears. 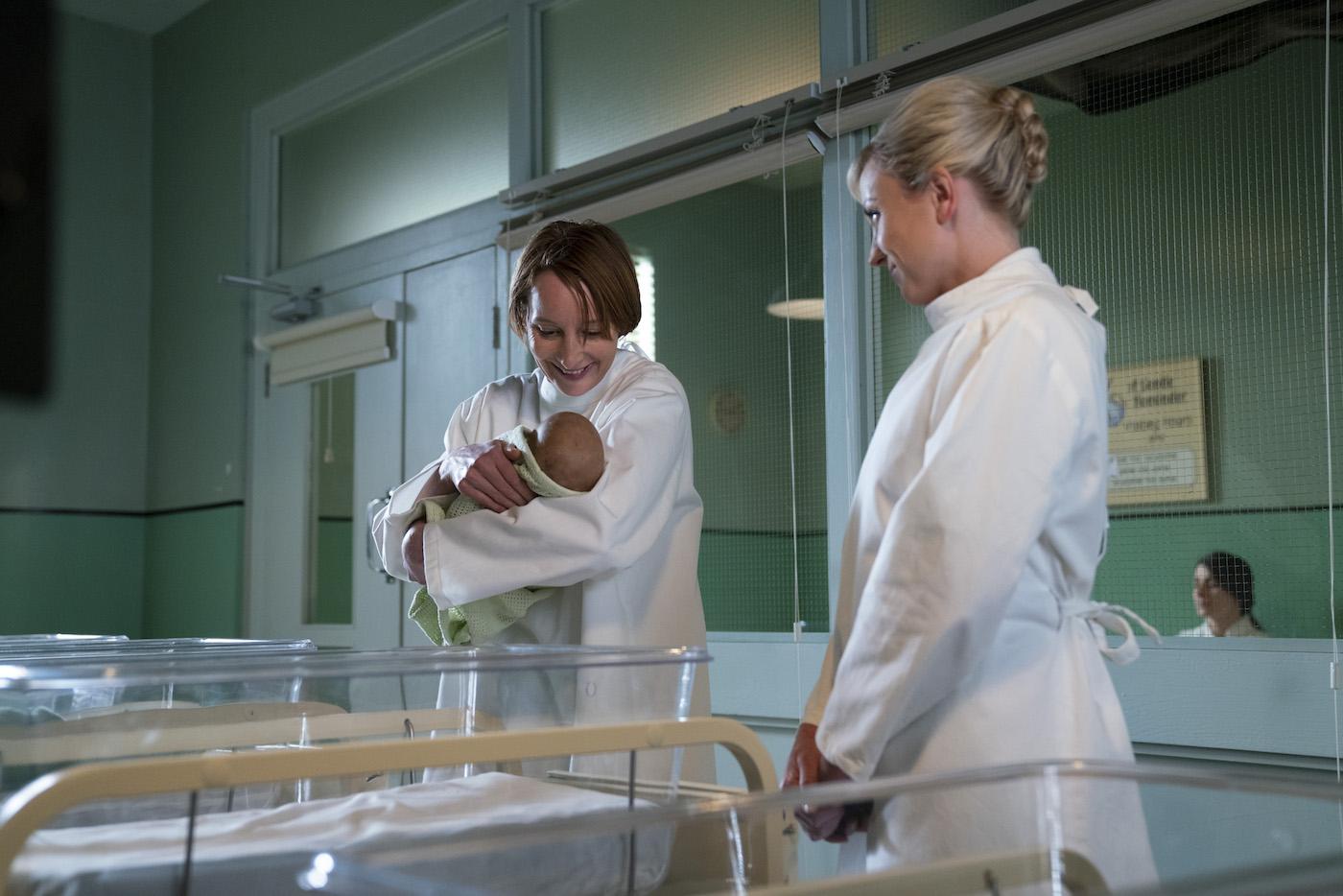 Frances informs Sergeant Woolf at the police station of the woman. He in turn asks Violet if she sold the thread used to tie the umbilical cord, but Violet says it’s silk, more expensive than anything she sells. Soon, the police are called on to remove a woman claiming to be Primrose’s mother from the hospital. She refuses to give any information about herself, so Woolf calls the Nonnatans to visit her.

Meanwhile, Dena has gone into labor. Despite a prolapse, Lucille and Nurse Crane safely deliver the baby. Dena’s other child is less healthy, though: when Ms. Higgins knocks at Dena’s new flat door to find Terry, there’s just a faint cry in response. Finding a key hanging on a string in the mail slot, Higgins lets herself in and finds Terry collapsed on the floor. She calls Dr. Turner, who is shocked: Terry has diphtheria, a disease thought vanquished from the developed world.

The Nonnatans rush to test everyone who has been in contact with Terry. Dena tests positive for the bacterium although she’s not sick, so her newborn is taken away and she is quarantined, along with some children from Terry’s school. When another woman from the homeless shelter turns up with the disease, Dr. Turner orders tests there.

Eventually, the source is discovered: a Pakistani girl whose family first lived in the homeless shelter and who attends Terry’s school has a huge ulcer on her arm that she had before immigrating to England. It has been shedding contagious bacteria ever since. The shelter and the school are fumigated while the ill recover. Dena is reunited with her children. Terry passes his school exam, and the Turners give him Tim’s old blazer as congratulations—Tim’s at boarding school now. 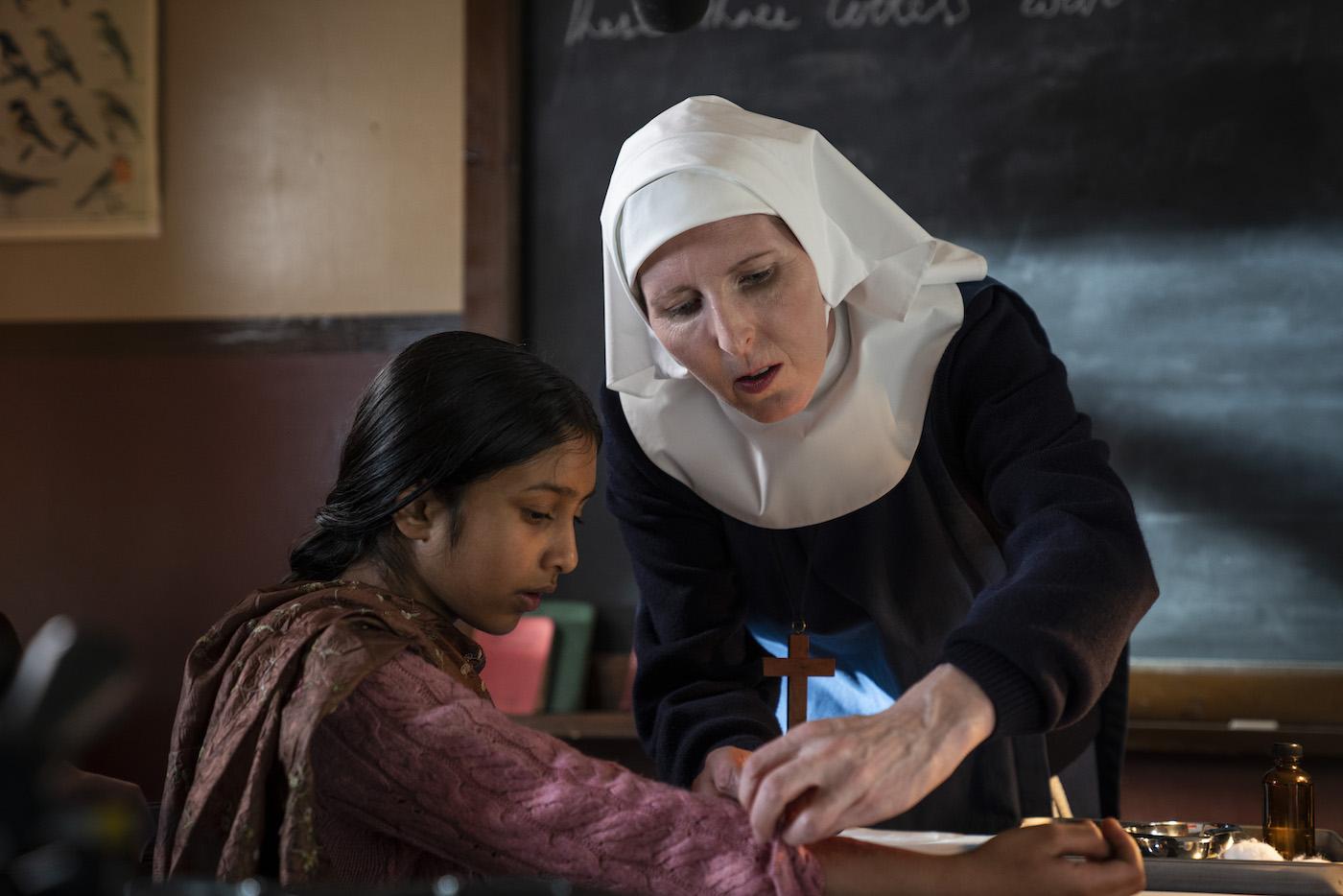 Mother Mildred and Trixie go to the police station to try to help the woman claiming to be Primrose’s mother. She doesn’t want to share details with Mother Mildred because she is a nun, but she eventually tells Trixie about herself after the nurse comforts her.

She was alone when she gave birth—she stuffed a sweater in her mouth so she wouldn’t draw anyone to her with screams. Her name is Brenda, and she is the housekeeper for a priest. And she now wants her baby.

Mother Mildred goes to see the priest, a Father Duncombe. He says Brenda can’t keep the child: she has a history of mental illness, and lives at the church, having moved there recently, after her home was condemned. Mildred is infuriated by his response, and pointedly notes that Brenda’s sewing basket, complete with purple thread is in his private study.

Father Duncombe then shows up at the hospital while Brenda is being reunited with Primrose. He wants to baptize the baby, but Brenda says she already christened her herself. Mildred refuses to leave Duncombe alone with Brenda, and cuts off the conversation when he begins convincing Brenda that she can’t take care of Primrose and must give her up for adoption.

Brenda opens up more to Trixie: she is divorced, because her husband beat her—she still has scars on her back. She married as soon as she could, having grown up in an orphanage. Her last happy moment was with her dying mother just before going to the orphanage.

Father Duncombe again tries to force adoption, by firing Brenda—social services might deem an unemployed woman unfit to be a mother. If she gives up Primrose, he will hire her back. Mother Mildred cautions Brenda against naming a father on the birth certificate, lest he try to assert his rights to give Primrose up.

And she also comes up with a solution. She is returning to the mother house, and she’s taking Brenda and Primrose with her, to work and be taken care of. Frances gives Brenda a blanket for Primrose that she made out of the nightgown Primrose was found in. Father Duncombe tries to pay Mildred for boarding Brenda, and speaks with Brenda alone before she leaves. “I loved you,” he says.

Violet has framed Fred’s photo of Betty, to be displayed in their home. Trixie, Valerie, and Lucille were runners-up in the magazine competition, so they have brightly colored new hosiery to flaunt. But now is not the time for celebration, not that they know that: Sister Julienne has received a letter informing her that Nonnatus House and the whole street will be demolished in the next two years. Tell no one, she says to Sister Hilda.