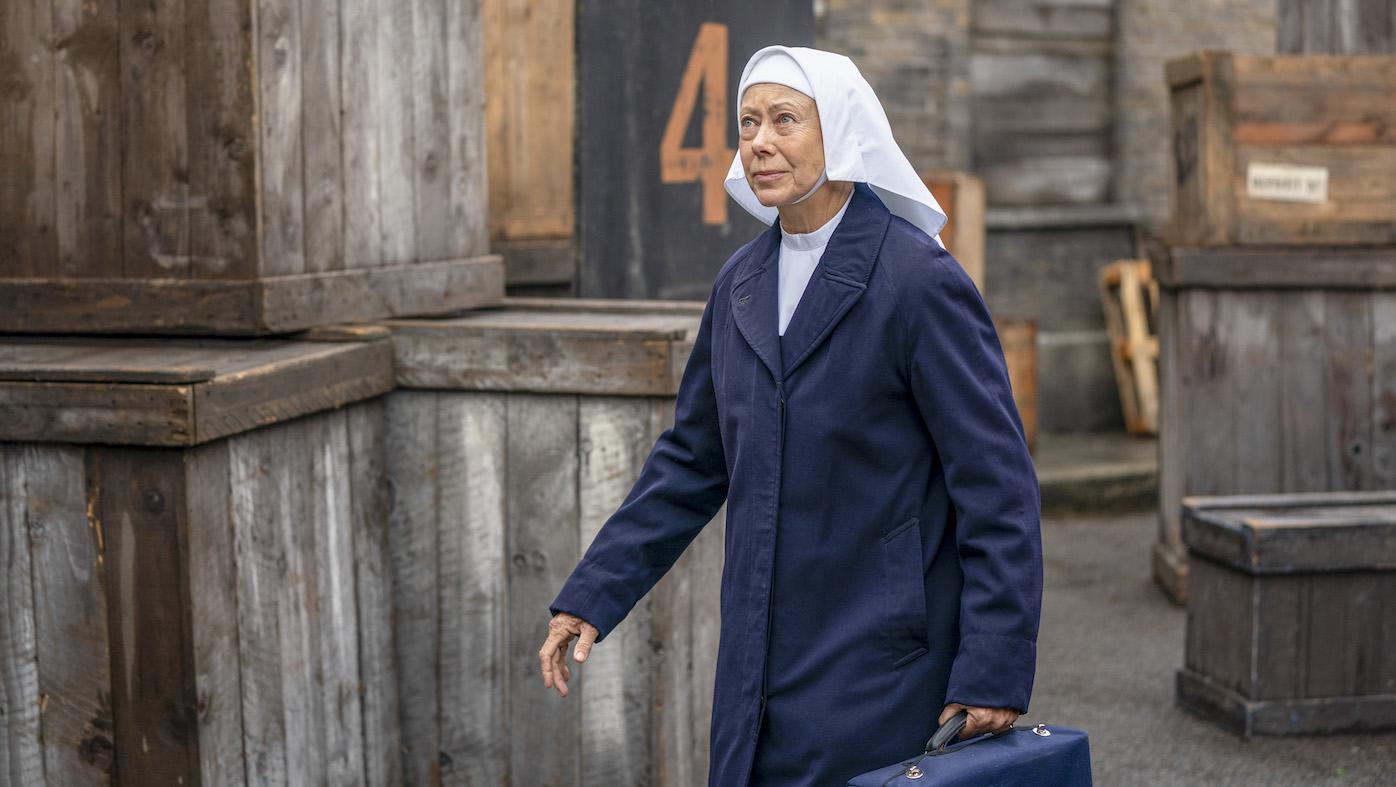 It’s Lent, and not only is Fred off sugar at Violet’s insistence, he’s also had to forgo dairy: twice now, their bottles of milk have been taken from their doorstep in the morning. It’s the same at Nonnatus House, so Sister Monica Joan suggests some “covert surveillance.” She and Fred stake out Nonnatus the next morning and catch a bedraggled young woman in mod clothing taking the milk.

When confronted, she says she doesn’t even like it much, but it’s for the baby. The midwives usher her into the house, eager to help a pregnant woman. Over porridge, Sisters Monica Joan and Julienne learn that the woman’s name is Tina Atkins, and encourage her to visit the clinic to confirm the pregnancy and get tests.

At the clinic, Miss Higgins is mooning over a flower bulb sent by her beau, Sergeant Woolf, to Nurse Crane’s annoyance. Tina indulges in some romance, too, flirting with Dr. Turner. But she fails to show up for a follow-up visit, so Sister Julienne visits her in her unsavory residence near the docks, where prostitutes like Tina entertain sailors. Sister Julienne extracts a promise from Tina to come to required classes at the clinic, while Tina talks of grand plans for a job at a boutique.

Laverne Bulmer doesn’t need help finding a steady job. Despite being advanced in her pregnancy, she’s still working double shifts at a factory—she and her husband are saving up for a deposit on a home. Fortunately, her mother Florrie is an unceasing worker. She basically delivered Laverne’s first child, Jillian, on her own before the midwives arrived, and now she watches Jillian while Laverne and her husband are at work. And she cleans and runs the family’s errands. 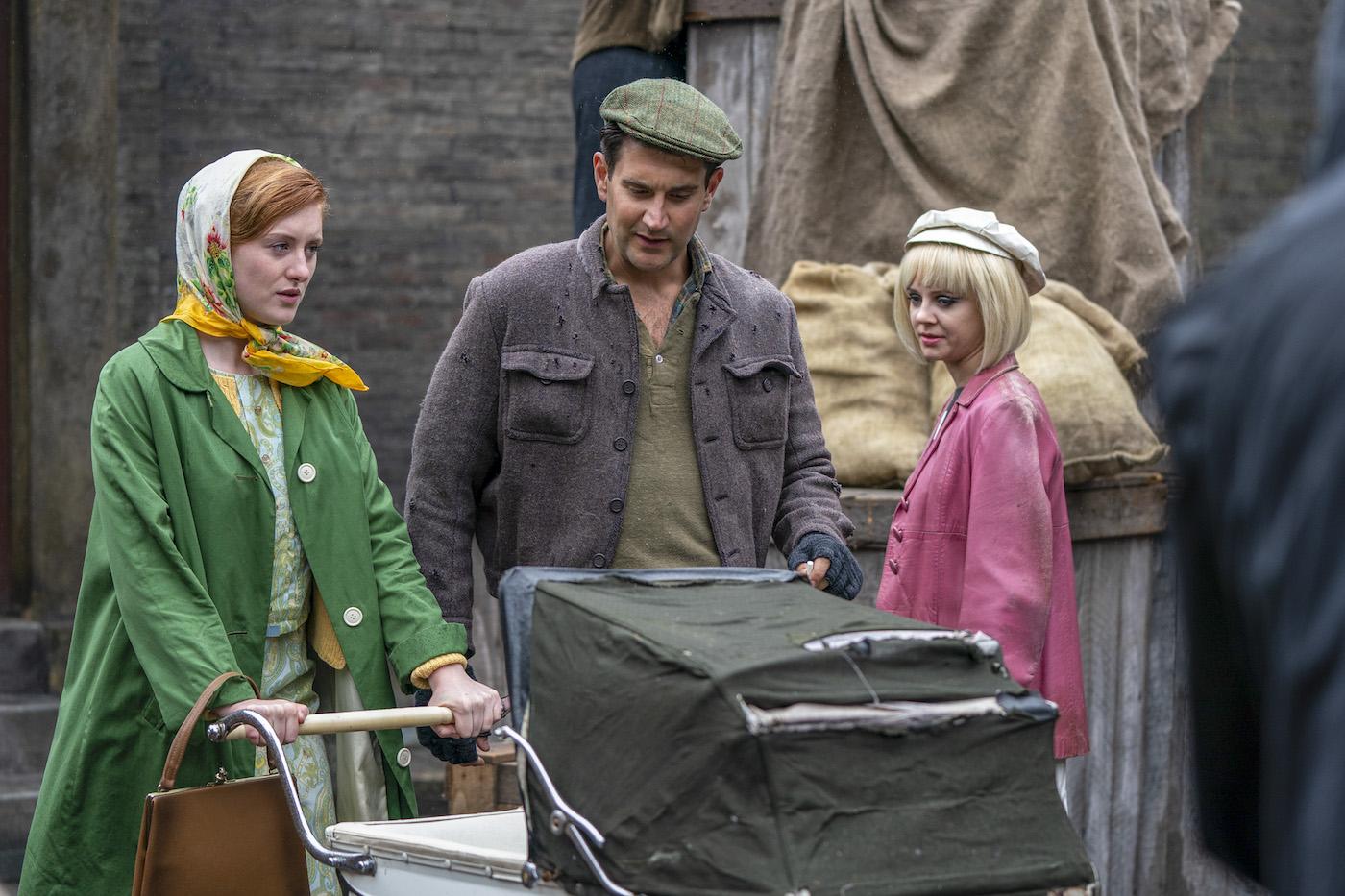 Tina wants a baby but may not be able to keep it. Photo: BBC / Neal Street Productions

But Florrie has lately been suffering from joint pain and exhaustion. While Laverne is at work, Florrie accidentally falls asleep. Upon waking, she rushes off to the store, forgetting about Jillian. A bit later, Valerie rides her bike past the Bulmer home and sees a crowd and Sergeant Woolf outside. A neighbor has heard Jillian crying in the house, alone, and all the doors are locked. The police break open the door—and Woolf clutches his chest. Valerie immediately calls for an ambulance: he’s having a heart attack.

During the commotion, Laverne arrives, then Florrie soon after. They’re both agitated, Florrie embarrassed and Laverne angry at her mistake. Valerie calms them down and calls Doctor Turner to examine Florrie. He believes it might be diabetes, but sends for blood tests. If it’s something worse, the family will be in trouble, given how much they rely on Florrie. Laverne has to stop work to take care of Jillian and Florrie while she rests.

Tina does show up to the clinic again, and Shelagh discovers both that she has gonorrhea and that she has had a child before. Tina says she had a boy when she was just a girl, but he’s with his father in America now. But at the local school, Sister Hilda has noticed two unkempt children during medical examinations. They’re Tina’s kids; their teacher says they miss their mother, but every time she has them something goes wrong and they return to a home.

Sister Julienne requests that Tina stay at the clinic, so that the nurses can ensure she is treated for her gonorrhea, even though this requires extra caution so that the other women don’t catch it. Tina is a disruption in the clinic, not getting along with the other patients. She’s excited about having a baby, but Sister Julienne warns her that her failure to take care of her other children might hurt her chances of keeping it. Julienne offers a suggestion of a regular job to help Tina’s case with social services, but Tina rejects it and tells Julienne to leave her alone.

Florrie is eager to accept help so she can be useful again. Doctor Turner now believes her liver might be failing, and Laverne’s husband suggests that Florrie might be a secret alcoholic. But Laverne rejects that outright: Florrie rarely drinks, and if he brings it up again Laverne will kick him out.

But Doctor Turner eventually figures out the real diagnosis: Florrie has hemochromatosis, a manageable condition that cause her to have too much iron. Florrie and Laverne are relieved: Florrie tells Laverne she was ready to jump in the river so that she wouldn’t be a burden. Laverne says she never will be.

Nonetheless, the Bulmers decide not to buy a new home. Until Florrie gets better, Laverne will have to stay home with Florrie, Jillian, and the new daughter she just gave birth to, with her mother by her side. But the important thing is that Florrie is going to get better. 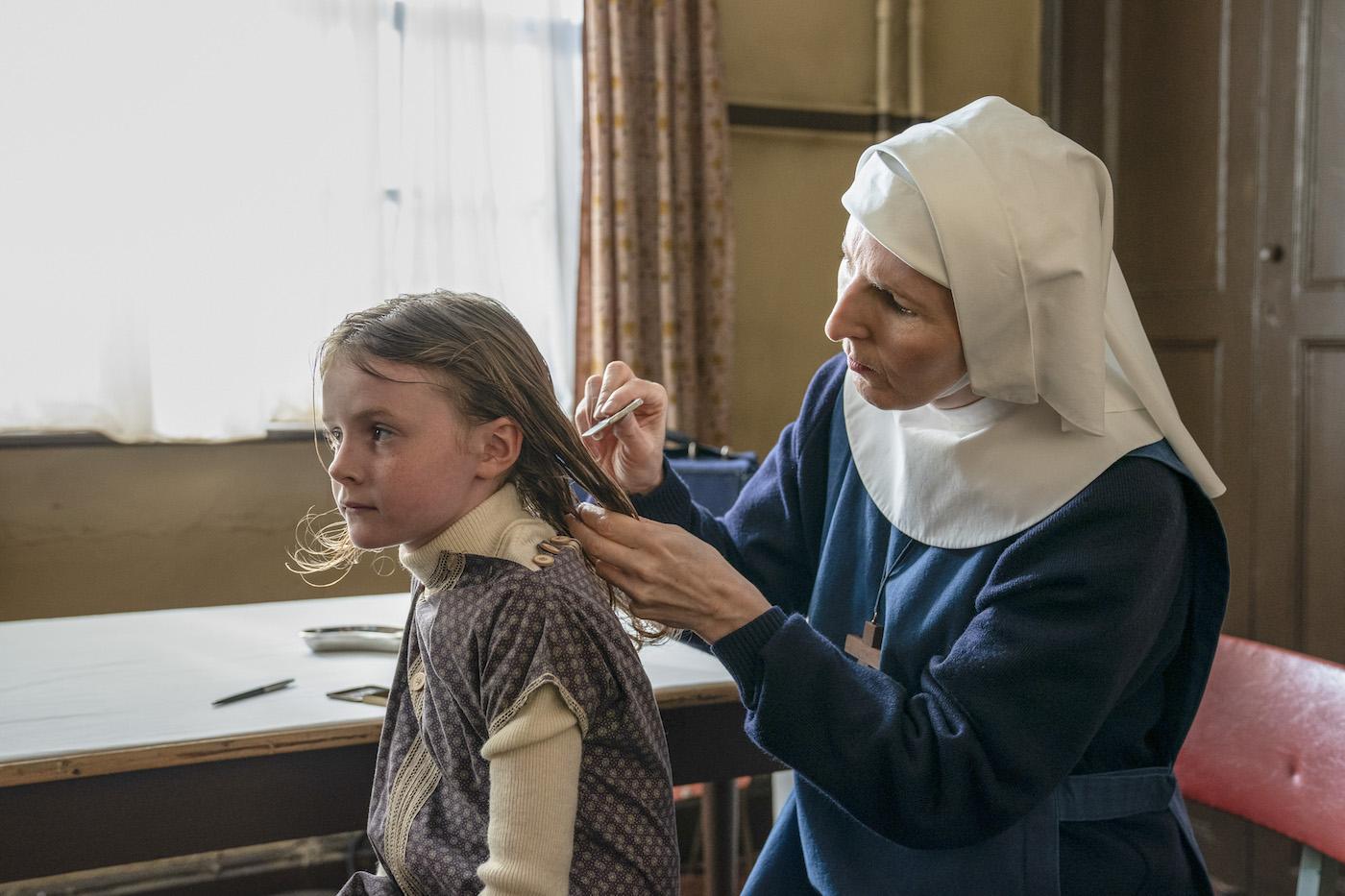 In her medical examinations at the local school, Sister Hilda has met Tina's other children. Photo: BBC / Neal Street Productions

The prognosis is not so rosy for Sergeant Woolf. When Nurse Crane visits him at the hospital, he tells her that he must “reconsider” his relationship with Miss Higgins given his health.

When Miss Higgins next visits, with plans for a brief getaway once he’s well, Woolf tells her that he will be staying with his sister upon his discharge, and that he might not ever be able to work again. Given that, he feels it would be unfair to continue their relationship, lest he not survive long. Miss Higgins says she understands, leaves him, allows herself a few tears, and then composes herself. Yet Nurse Crane offers companionship, having an al fresco cup of tea with Miss Higgins, who apologizes for her “foolishness.” Nurse Crane calls that nonsense, and comforts Higgins.

Tina is in some pain, but refuses to let Lucille examine her, insisting she’s just sore from the bed in the clinic. Sister Hilda has learned that Tina’s children are about to be adopted—letters were sent to Tina, but perhaps she never received them. Sister Julienne wants to help Tina keep her children, so she visits the clinic—and finds an empty bed.

She discovers Tina collapsed outside the back door, and rushes her to the hospital. When Tina wakes up after surgery, she is pleasantly surprised to find Sister Julienne sitting with her. Tina has lost the baby. She says it’s for the best; she has been no good as a mother. She knew about the pending adoption, and wants it to go through. Her kids will have a better life without her.

Sister Julienne feels she has failed Tina, she admits to Sister Monica Joan. Tina will probably get pregnant again, only to be unable to take care of the child again. Monica Joan says Julienne has not failed, and that she must accept the world as it is. So Sister Julienne goes to Trixie and asks her to advise Tina on using contraceptives, despite her religious objections. Julienne would be failing Tina otherwise.