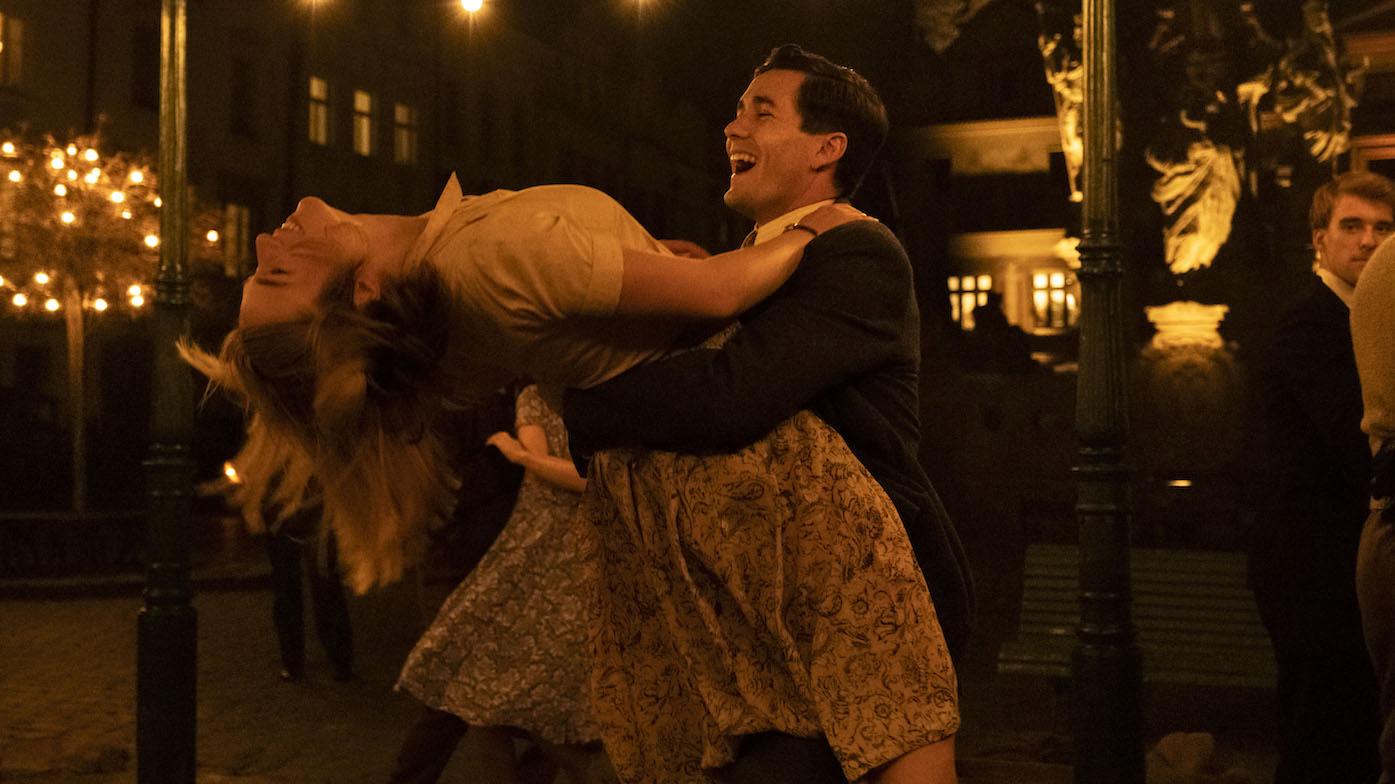 The British translator Harry is falling in love with the Polish waitress Kasia in Poland, despite his girlfriend back home, but war is about to interrupt the romance. Photo: Mammoth Screen

World on Fire airs Sundays at 8:00 pm and is available to stream. Recap the following episode.

March, 1939. Nazi Germany has just invaded Czechoslovakia, having already annexed Austria. Fascists have surfaced in England, too, under the leadership of Oswald Mosley. At a Mosley rally in Manchester, a young couple begins singing: “Bye, bye, blackshirts.” The Fascist-sympathizing blackshirts turn on them, bloodying Harry’s face and getting both him and his girlfriend Lois sent to jail.

Lois’s father Douglas, a shell-shocked bus driver who hands out pacifist newspapers on the side, is angry that the police arrested Harry and Lois instead of the blackshirts. Harry’s patrician mother is disappointed in her son, mainly for dating a girl who works in a factory. Harry and Lois share a brief goodbye: he is about to leave the country for his work as a translator.

Fascists may have beaten Harry up in England, but, five months later, they might do much worse. He is now working for the British government in Warsaw, and the German threat to Poland is growing ever more real. Harry’s friend Nancy Campbell, an American journalist based in Berlin, has witnessed a massing of German tanks and the killing of innocent Poles as she crossed the German-Polish border. The Germans are dressing up the bodies in Polish army uniforms, to make it look as though the Poles had invaded Germany: justification for their own invasion. Nancy herself is shot at as she speeds to Warsaw. 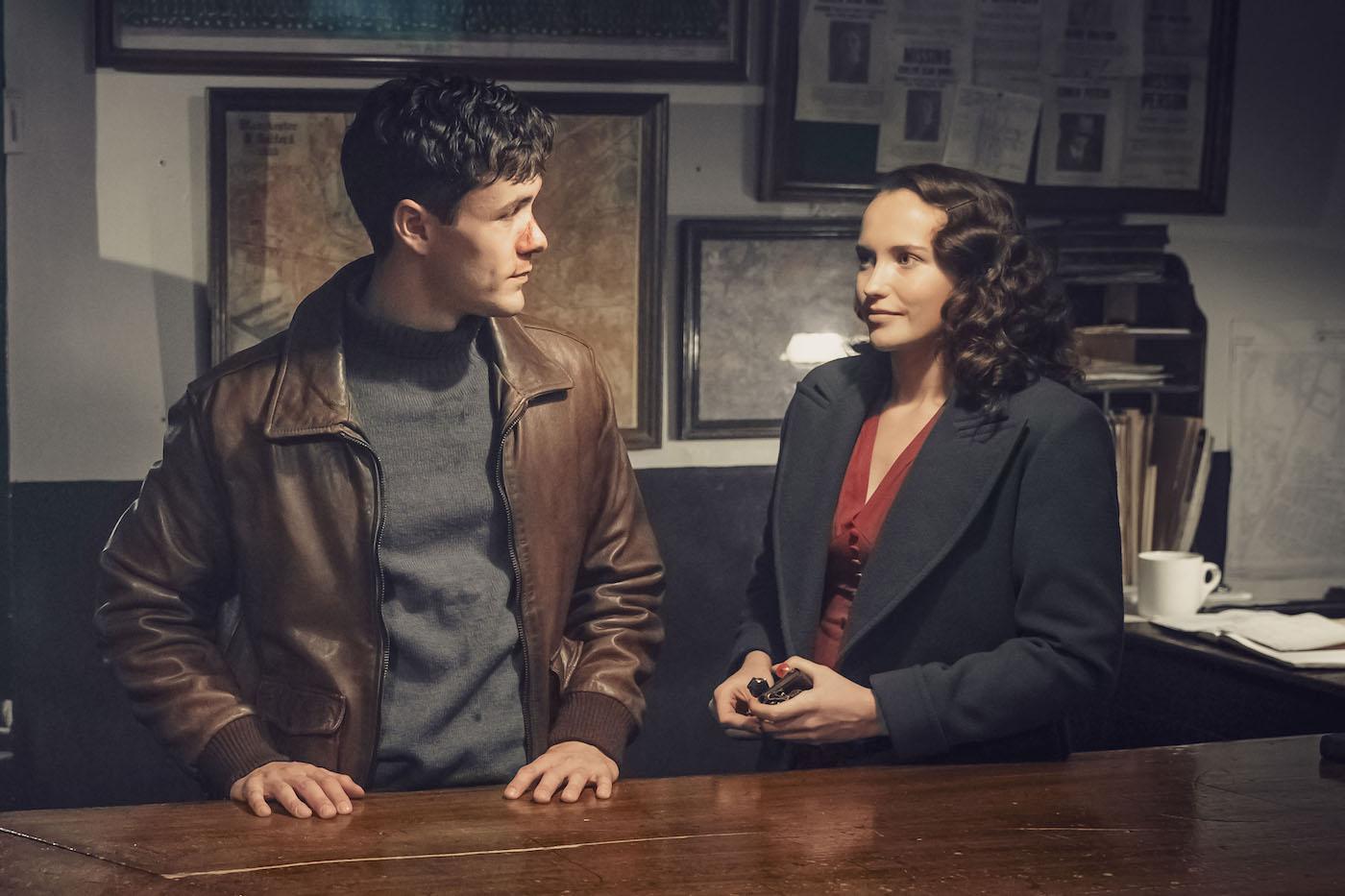 Harry and Lois are sent to jail after disrupting a blackshirts rally in Manchester. Photo: Ben Blackall/Mammoth Screen

Nancy warns Harry that war is coming, and that bombs won’t spare him. She tells him to take his Polish girlfriend, the waitress Kasia, and leave while they can—Nancy herself is trying to get her nephew Webster to leave Paris for America. Kasia’s own father, Stefan, and ailing brother, Grzegorz (Gregor), are about to leave to defend the port of Danzig from German invasion—Hitler has been demanding its accession to Germany.

Stefan had fought for Danzig in World War I, but this time the city is much worse off. Stefan is one of only a few actual soldiers among the city’s handful of defenders, and they are quickly driven back. He wants to surrender, but the others vote to fight on—until their hiding spot is sprayed with gas and ignited by the Germans. Stefan walks towards his foes waving a white flag—and is shot dead.

After further urging from Nancy, Harry tries to convince Kasia to flee Poland with him. She doesn’t want to leave her home, or her mother and younger brother Jan. But then the Germans start bombing Warsaw—World War II has officially begun.

Harry runs to the café where Kasia works. The doors are locked. A bomb falls nearby, its blast hurling Harry through the glass doors. Kasia rushes forth to see if he is okay—and Harry proposes. If Kasia is married to him, he can take her with him out of the country. There’s no time to think, Harry implores, so Kasia says yes. 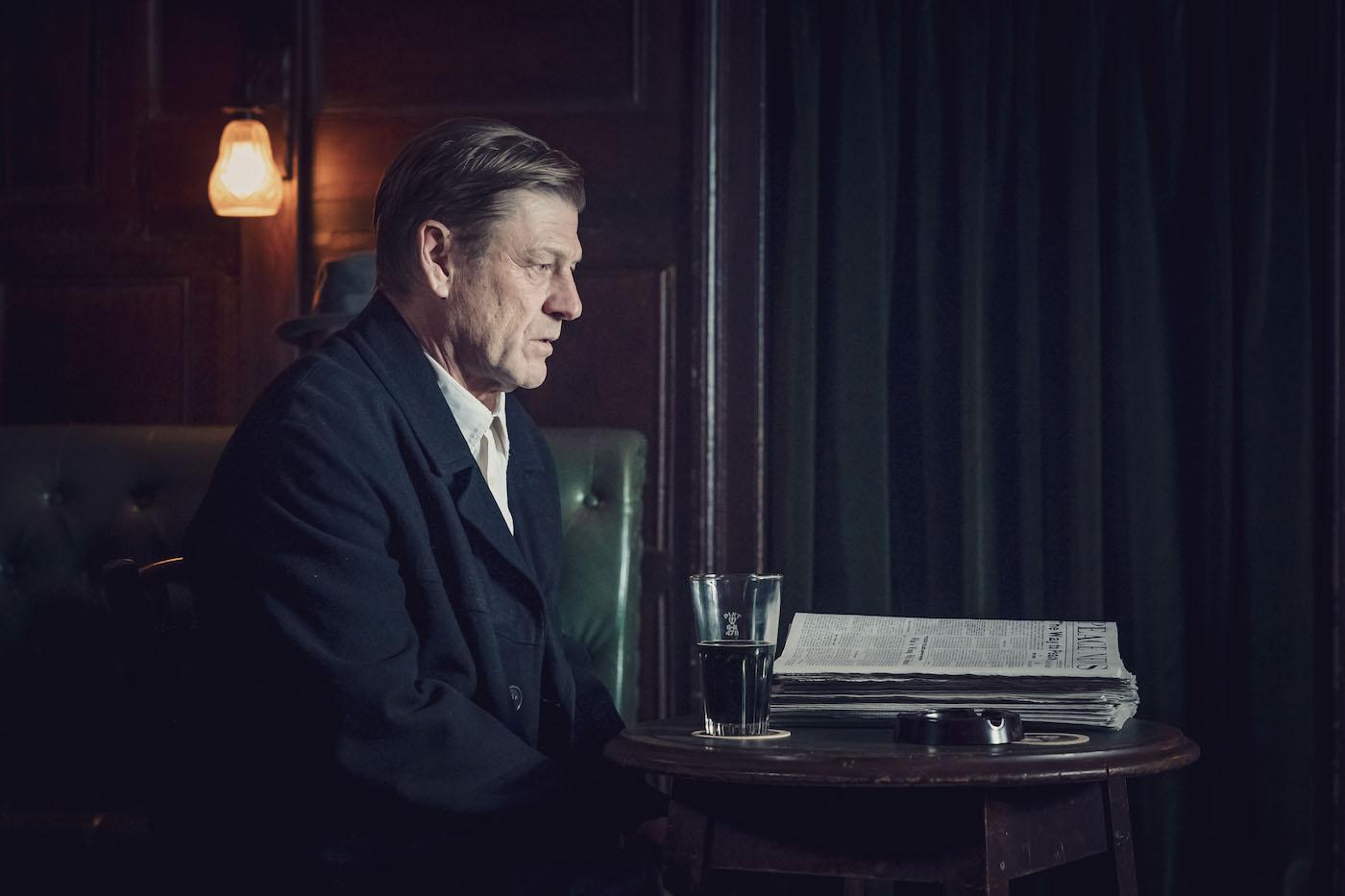 Lois's father is a bus driver who hands out pacifist newspapers on the side, suffers from shell-shock, and has lost his wife. Photo: Ben Blackall/Mammoth Screen

What about Lois? She is still in Manchester, singing in nightclubs to make extra money beyond the wages from her factory job. She’s the woman of the house, her mother having died, and must mind both her father and her truant brother, who’s in trouble with the police. And she still believes she is Harry’s sole girlfriend; she knows nothing of Kasia.

Concerned about Harry—she hasn’t had a letter from him in a while, and Germany is bearing down on Poland—she reluctantly goes to his mother to ask for any news. Robina hasn’t heard from her son, but she invites Lois in for tea. Robina is cynical; she has little faith in men, including Harry, and tries to convince Lois to leave him behind (not out of goodwill, but because Lois is beneath Harry’s class). Lois accuses Robina of being a snob—and she agrees that she is an “elitist.” As Lois leaves, she tells Robina about an upcoming anti-Fascist event. With an eye towards antagonism, Robina responds that she quite admires Mosley, the leader of the British blackshirts.

Back in Danzig, Gregor is escaping through the sewer with another defender, Konrad. Gregor’s persistent cough is cause for worry, and betrays the men when they are forced to hide in a closet in an abandoned building being searched by German soldiers. As the Germans shoot defenseless men in the streets of Danzig, Gregor offers a pack of cigarettes—given to him by Harry—to the trembling young German guarding him and Konrad. As the German boy comes closer, Konrad and Gregor dash off, narrowly escaping the Germans once again. 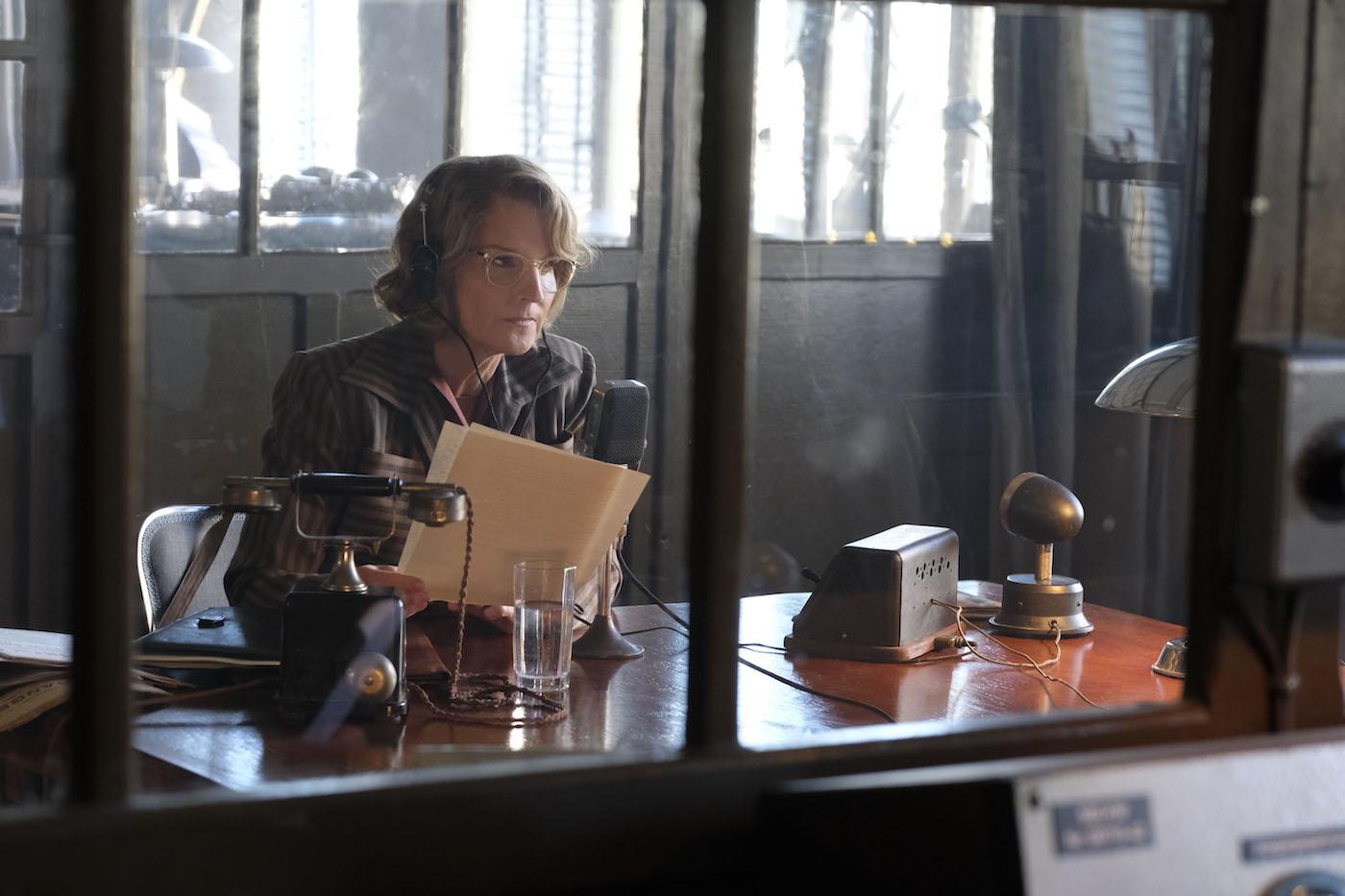 Nancy is an American journalist based in Berlin who must be careful what she says in her broadcasts. Photo: Dusan Martincek/Mammoth Screen

In Paris, Nancy’s nephew Webster refuses to heed her warning and leave for America. A doctor, he’s having too much fun in Paris, going to nightclubs and buying drinks for a saxophone player he particularly admires. One day, that musician comes to the hospital and asks for Webster: as a French African, he has been attacked by far-right partisans of Action Française. As Webster treats his head wound, the saxophonist hints that Webster might be in love with him—but Webster doesn’t yet seem to have accepted that he’s interested in men.

Nancy has returned to Berlin to report on the German aggression in Poland, but she must be careful what she says in her radio broadcasts. Her neighbor, Frau Rossler, listens to the broadcasts, even though Germans are forbidden from doing so. Her son is in the army—he’s the terrified boy who let Gregor and Konrad escape in Danzig.

Harry is also leaving Warsaw, anxiously awaiting the arrival of Kasia at the train station. He’s beginning to think she will not join him in fleeing the country. Finally, she arrives, her brother Jan in tow: she wanted him with her as long as possible. As the train begins to pull away, Harry boards while Kasia hugs Jan. Then she picks the boy up, puts him on the train, and closes the door. Keep him safe, she tells Harry; and the train is gone.