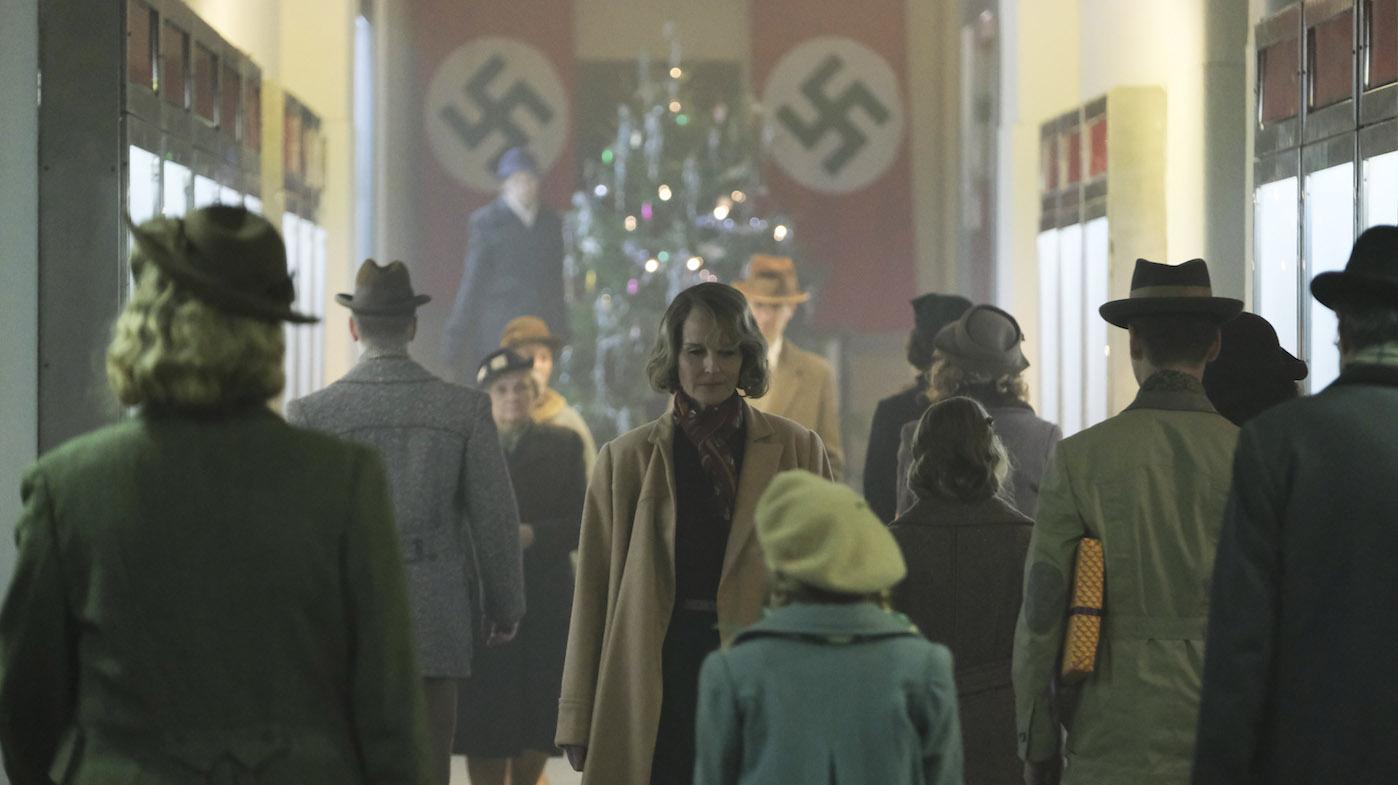 Nancy begins to dig into some of the nefarious programs going on in Nazi-controlled Berlin. Photo: Gareth Gatrell / Mammoth Screen 2019

Kasia is no longer the only one facing the depredations of war. Tom, Lois’s brother, is on a ship in the south Atlantic, searching for a German warship that has taken down several British ships. As he collects bets from his fellow seamen on when a caged bird will lay an egg, his ship closes in on the German one. Back in Britain, his father Douglas listens nervously to the radio for news of the ship. When the reception is fuzzy, he smashes the radio.

Harry and Lois have also joined up, although they have yet to witness combat. Harry leads a unit in digging foxholes, while Lois is touring bases to entertain soldiers. When she appears at Harry’s base, he apologizes to her, but she rejects it and sends him away.

In Berlin, Nancy has begun digging into the Nazis’ treatment of disabled people after witnessing the fear in her neighbors the Rosslers after their daughter had an epileptic fit at a movie theater. The Rosslers ask Nancy not to tell anyone about the fit—they had a neighbor with a crippled and blind son who has suddenly disappeared. At his factory, Herr Rossler has to deal with rising antagonism, breaking up a fight between two women after one criticizes the other because her son didn’t enlist, while she calls her opponent a Jew.

The Rosslers’ son is also in danger: he’s in the German army, in Warsaw. Kasia’s fellow resistance members have told Kasia to flirt with a German soldier and bring him into the ruins where they shelter so they can kill him. Young Klaus Rossler is entranced by her while he drinks at the café where she works, and gives her a big tip before leaving. She hesitates, then runs after him. As they walk through the ruined city, he speaks of his sister, and is polite to Kasia—so, at the last minute, she saves him from her comrades before they have a chance to kill him.

On Kasia’s brother Jan’s birthday, she sings to him from bombed-out Warsaw, not that has any way of knowing, while he is treated to a meal by Robina. Jan has been taunted by boys at school for his foreign name; they also accuse him of being a German. He has taken to crying at night. Robina is trying to care for him, and so she has marched up to all the schoolboys and lectured them: Jan’s family is fighting Hitler; if they’re mean to him, they’re on Hitler’s side.

Robina gifts Jan with a family album for his birthday, thinking it could help him learn English. He pulls out his photo of his own family with Harry and tests out some vocabulary: Harry and Kasia, husband and wife. Robina thinks he has made a mistake, but he is insistent.

Jan’s other surviving family member, Gregor, is in Eastern Poland with his fellow fugitive Konrad. They beg a farmer for food and a short stay in his home to warm up. He reluctantly agrees, but Russian soldiers soon arrive, so Konrad and Gregor hide in the cellar. The Russians leave without finding them, but as the fugitives move on, they see the soldiers return. Gregor hesitates, but Konrad wants to keep moving—and when gunshots ring out at the farm, Gregor follows Konrad. 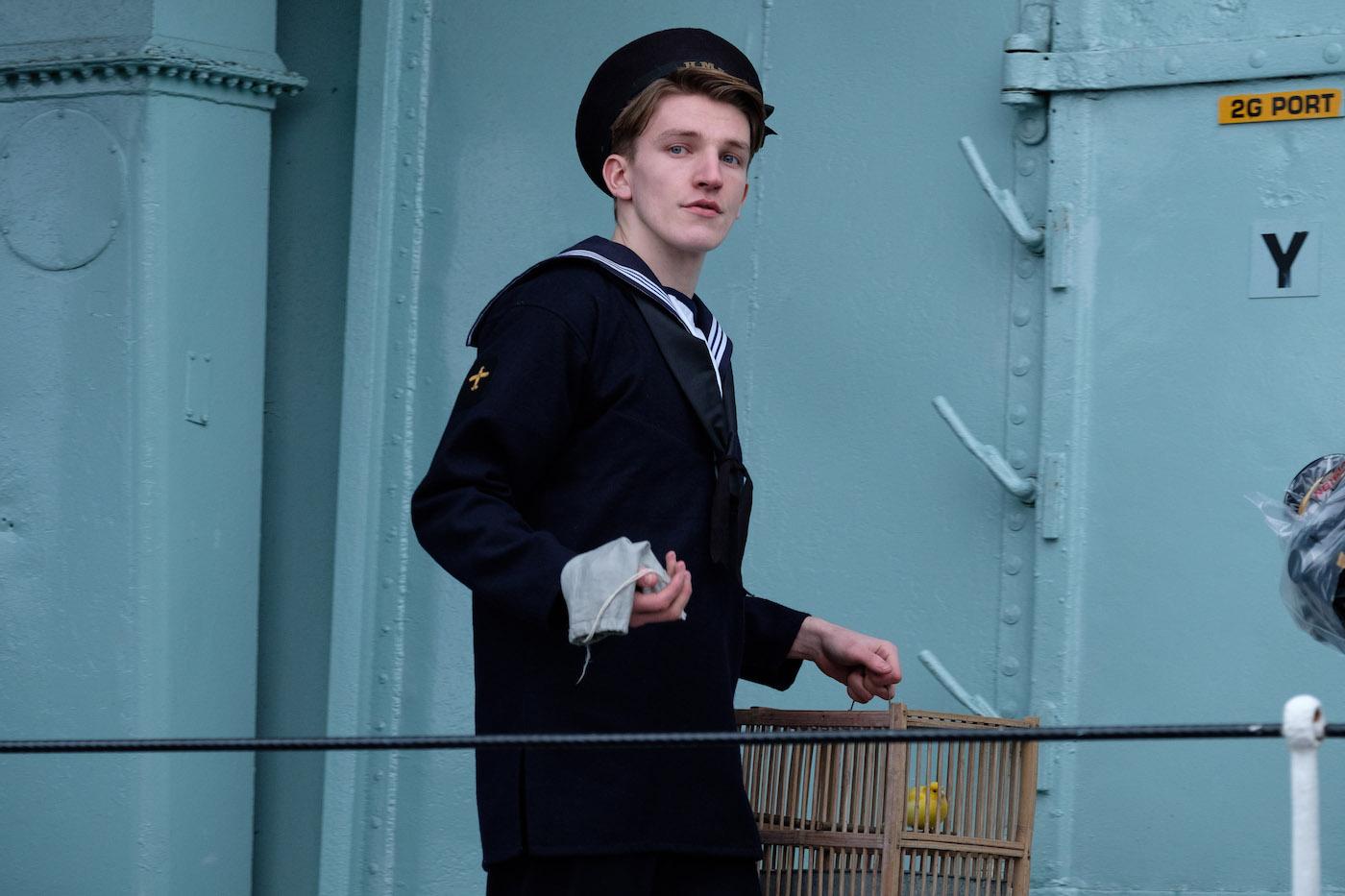 While serving in the British Navy, Tom is entertaining himself by collecting bets. Photo: Ross Ferguson / Mammoth Screen 2019

Violence also breaks out on Tom’s ship. He gets in a fight with one soldier when he tries to collect a bet from him—and then an alarm sounds, and everyone rushes to battle stations. As Tom loads cannons, an explosion throws him from his station. He’s alive, but another comrade has died, while the man he just fought with has lost an arm. Tom tourniquets it and helps him to the sick bay. The Brits have scuttled the German ship, but they’ve lost men on several ships. Nancy reports that both the Germans and Brits claim victory—objective truth has disappeared in war.

At home, Douglas nervously waits for a telegram about Tom, fearing that he is one of the dead soldiers. But it never comes.

During the battle, Tom’s bird laid an egg. When he tries to give the winner of the bet the money, the soldier wants to give it to the widows of the killed men, but Tom says he should look out for himself. Later, however, in tribute to his dead comrade, he gives the money to the man who lost an arm. Don’t tell anyone else, he says.

At Harry’s camp, Lois sings for the rowdy soldiers. After the concert, she makes out with a soldier in Harry’s unit. When he goes to pull out a condom, she says no, and he acquiesces. But Harry appears then and punches the soldier in the face.

The next day, Harry once again apologizes to Lois: he thought the soldier was taking advantage of her. He wasn’t, Lois says. Harry later speaks to the soldier and learns that Lois told him she was pregnant—it was a good way to stop things. Harry runs off to Lois, who is preparing to leave the camp for her next stop. He asks why she didn’t tell him; she says it wouldn’t be any use, she has to look after herself. And then she’s gone.

Harry relates his romantic entanglements to his fellow officer, complaining that he loves both Lois and Kasia. He then grabs a pistol, walks into the woods, and fires at nothing.

In Warsaw, a gunshot finds its target, and is avenged with another. Kasia and another resister watch one of their comrades get beaten and shot in the head by German soldiers. She then goes through with the abandoned plan, bringing a soldier into the ruins, where a gun is pointed at his head. She walks away. He’s shot. She doesn’t look back.

Even more meaningless killing is occurring in Berlin. Nancy has forced her German minder to let her speak with the doctor running Hitler’s euthanasia program, which officially is for older people who are suffering—but Nancy knows it is being used on disabled children. The doctor insists that he’s alleviating suffering and enabling progress, and that the Nazis are simply doing what other Western countries are too cowardly to do.

Nancy explains the program to the Rosslers, warning them how it will progress if their daughter is targeted. Herr Rossler is furious that Nancy has dug around and then continued to visit them; now they will be suspected. He kicks her out, but not before she gives the Rossler girl a Christmas toy. The girl smiles at the toy, and Nancy leaves.