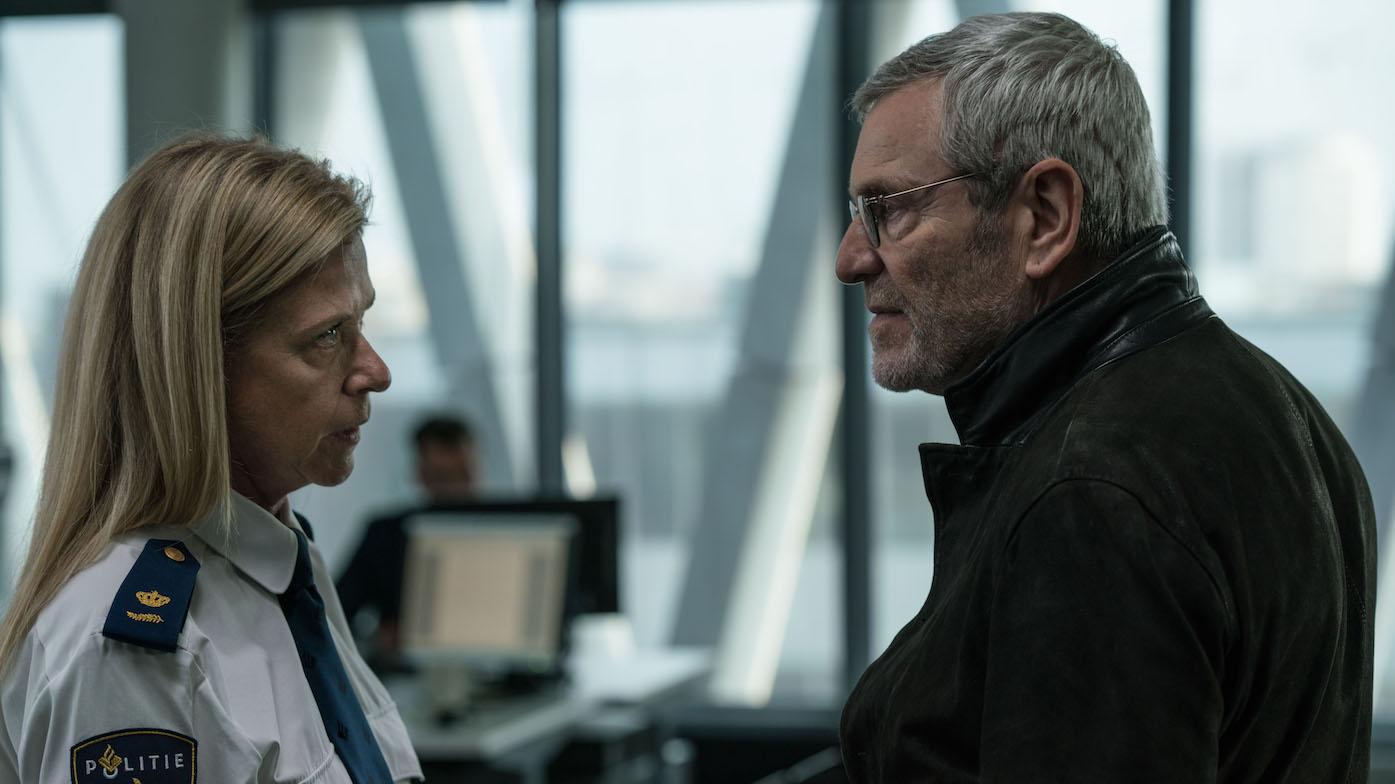 Baptiste discovers that Martha has been keeping a secret from him. Photo: Two Brothers Pictures and all3media international

Amazingly, Edward has not killed Baptiste. Instead, they are speaking at his kitchen table. Edward admits that his daughter Lucy worked in Amsterdam’s red light district, just like Natalie. Lucy eventually killed herself; the loss broke up both Edward and his marriage. Natalie reminded him of Lucy, so he began visiting her frequently, paying her to talk or even just sit with him

Natalie overheard that a Romanian gang was about to move one million euros, and she knew where—the Romanians weren’t very careful with their secrets around prostitutes. Natalie’s younger sister had been trafficked while visiting Natalie in Amsterdam, and so Natalie decided to steal the money and use it to buy her sister back to safety. Edward agreed to help.

While Natalie used sex to distract the driver of the van transporting the money, Edward broke into the back and took the cash, giving it to Natalie later. Unfortunately, there was a camera in the van.

Constantin, the murderous Romanian whom we have glimpsed in various acts of violence, tracked Edward down and threatened him with photos of Edward’s father and ex-wife, warning that if Edward didn’t return all of the money, everyone he loved would be hurt.

Terrified, Edward asked Natalie for the money back, but she refused; then, he was hit in the head with a bat and knocked out. When he regained consciousness and returned home, his father’s decapitated head was on his kitchen table. Having explained his dire situation, Edward warns Baptiste: your family is in danger. The Romanians bugged the phone of Celia, Baptiste’s wife, and know where his family lives.

Baptiste rushes from Edward’s house and calls Celia and then his daughter when she doesn’t pick up. His daughter is out with her husband and child, and accidentally took her mom’s phone, too. Baptiste warns her to stay away from her flat, where he and Celia have been staying, then calls the police to check the flat. When he finally arrives from Antwerp, the flat is empty and in disarray. No one was there when the police arrived.

Baptiste finds Celia, safe, at a laundromat. When she opened the door for Constantin, who claimed he was there to check the meter, she immediately recognized him as the too-friendly man at the store. She slammed the door and ran until she found a public place with CCTV cameras: the laundromat.

Baptiste tries to get Edward to tell his story to the police, so that they can find Constantin and save both of their loved ones, but Edward is afraid to: arresting Constantin won’t save his family; the gang will still be after him until he finds and returns the money. But he gives Baptiste the keys to his house and says the police can search it. They put out an arrest warrant for Constantin.

Baptiste arranges a safe house in the woods through a friend, who promises to guard it with people he trusts. Baptiste’s daughter is livid with him for putting his family in danger, and Celia’s not too happy either. She tells him to find the money and return it now—simply arresting Constantin won’t be enough to ensure their safety.

Constantin continues to threaten people to return the money. He visits Kim at a market, having discovered her former identity as Dragomir. Given Dragomir’s past life of crime, Constantin thinks Kim was involved with Natalie in stealing the money. She doesn’t know anything about it.

Baptiste and Edward set out to find the money, deciding to speak to Natalie’s roommate, Lina, again. Lina was the one who knocked Edward out when he asked for the money back from Natalie. She says the Romanians are following her, so she’s reluctant to help—but she shares that Natalie said that if anything happened to her: find her son.

Edward is shocked to learn Natalie had a son, named Matty. He lives with his father, Thijs de Boer, whom Niels the police officer visited at the hospital after Natalie’s death, in order to get her next of kin to identify her body. Thijs won full custody of Matty because he could afford a better lawyer; no matter that he is an abusive addict. Natalie told Lina that the money would be with her son, worst case: if she couldn’t save her sister, at least she could help Matty.

Matty has been snuck out of the hospital, where he just had an operation, by the tulip farmer, Herman, who found a necklace and bag full of cash buried on his farm. Herman’s car breaks down while driving Matty away from the hospital, and because the garage he is towed to is closed for the night, he’s forced to buy a new car—using the cash from the bag.

Back on his farm, Herman pays a friend to hook Matty up to an IV, since he left the hospital early. When Matty finally wakes, he is surprised to see Herman—his grandfather. Herman explains that Natalie wanted him to take care of Matty, instead of Thijs; and she left them a gift. But when he goes out to his car trunk for the bag of money, the windows are broken and the bag is gone.

Matty’s disappearance from the hospital is a roadblock in Baptiste’s search for the money. Having learned about Thijs from Lina, he calls the Amsterdam police commissioner Martha, an old flame, to get information on him, and she tells him to bring Edward in: Europol wants to speak with him.

Genevieve, an agent from Europol, has cancelled the arrest warrant on Constantin—she’s heading up a huge investigation against the Romanian gang, and arresting just him could ruin the investigation. She asks Edward to wear a wire and get incontrovertible evidence that Constantin murdered his father, thus giving her ammunition to make Constantin turn on the rest of the gang and take them all down. Edward refuses. As he goes to his car later, Constantin and another Romanian appear and order him to get in their car.

Martha is angry that Europol has interfered in her work, and tells Baptiste that he should leave the police station. Waiting for him outside is her son Niels: it’s his day off, and he will help Baptiste look for Thijs. They visit the hospital where Niels found Thijs, and discover that both Thijs and Matty are gone; the hospital has no record of Matty leaving. Security camera footage is no help: it dropped out for about the ten minutes when Matty disappeared.

Frustrated in their search, Baptiste and Niels have a cup of coffee and discuss their dislike of hospitals, because of the recent life-threatening medical operations they both went through. Niels then leaves, promising to put out an alert on Thijs while Baptiste continues to question the hospital employees. Baptiste takes Niels’s paper coffee cup and sends it to a lab to be tested.

The following day, Baptiste realizes that one of the hospital employees was lying to him and Niels: she helped Matty escape by deleting the camera footage, in exchange, presumably, for payment.

What Baptiste does with this information, we don’t yet know; but he has made another startling discovery. He visits Martha at home, and asks: Why didn’t you tell me Niels was my son?