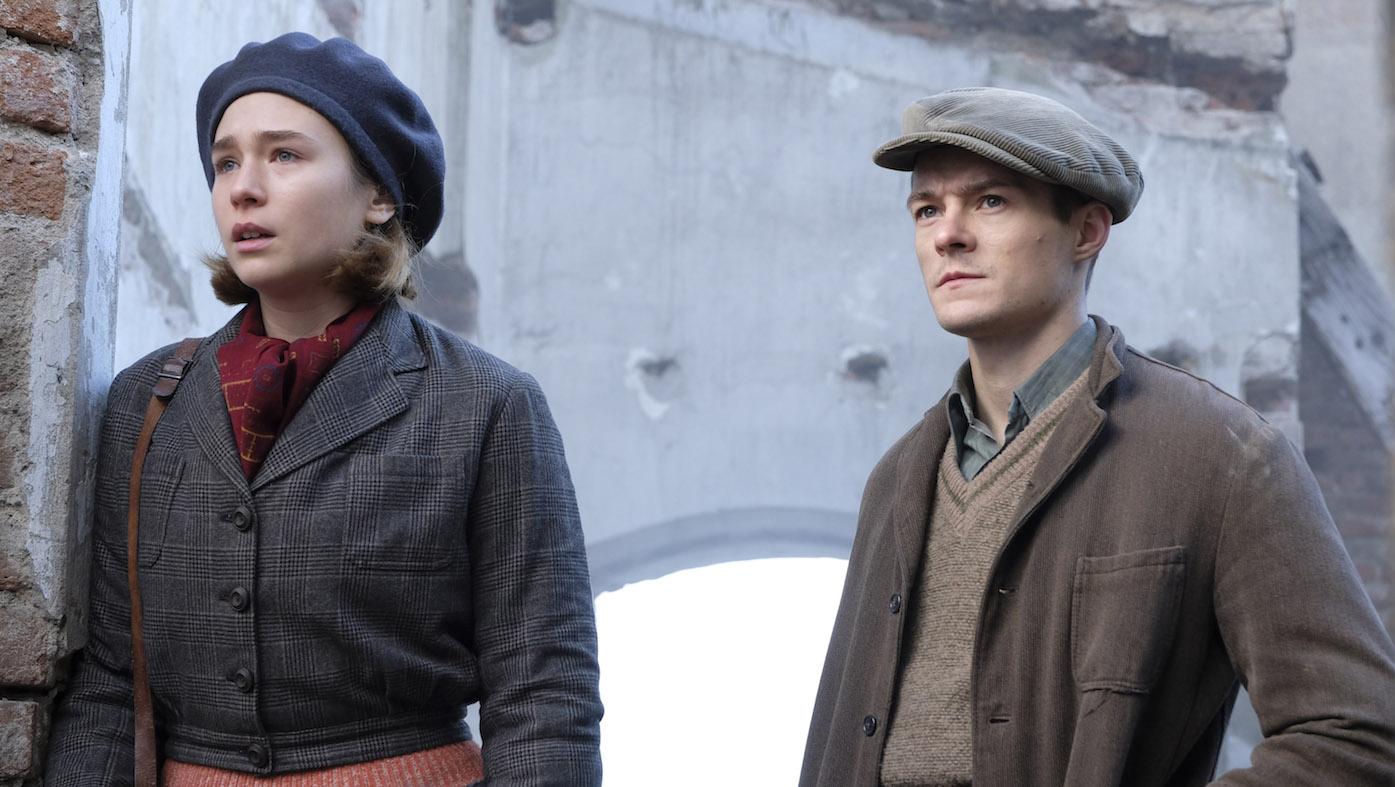 The cruelty of war and occupation continues to appall Kasia and drive her to more drastic actions. Photo: Dusan Martincek / Mammoth Screen 2019

While Lois has returned to England, Harry is still abroad, about to engage in his first combat. He and his unit are stationed in Louvain, Belgium, and the Germans are quickly sweeping closer.

On the other European front, in the east, Gregor and Konrad are still fugitives, sleeping in the forest. Gregor wakes up and hears a tank approaching: the Soviets. He and Konrad could remain hidden—except that one soldier is relieving himself nearby. He spots them, and Konrad shoots him.

As the other soldiers chase them, Konrad and Gregor split up. Gregor runs into another soldier, this time a German, who desperately tries to shoot him but can’t: he’s young and terrified, and his gun is stuck. Gregor points his own gun, and the German puts his weapon down, shaking. But Gregor doesn’t shoot: he shakes the boy’s hand—and the boy is shot by Konrad. You didn’t have to kill him, Gregor says.

Kasia no longer has qualms about leading German soldiers to their death in Warsaw. When she spots an SS officer in church, she takes him as her target, flirting and bringing him to a secluded spot. The officer is aggressive and tries to rape her before her comrade can arrive to kill him, so she pulls her own pistol and shoots him.

Webster has begun seeing the effects of violence in Paris. His hospital is treating wounded soldiers from the front lines in Belgium, and he also dresses the wounds of a Jewish couple attacked in the street; the woman is pregnant. One of the nurses admits to him that she is Jewish; her family has already fled, and she has forged papers so that she can continue to help at the hospital. Webster thanks her for her courage.

He and his lover Albert need courage: Albert is a target for all sorts of hate, being both black and gay. He comes home one night to a red swastika on his door and a bleeding pig’s head in the street.

Webster’s aunt Nancy is bravely trying to reveal the cruelty of the Nazis by reporting on the euthanasia of disabled children, but her German minder won’t let her. Her neighbor, Herr Rossler, has reluctantly joined the Nazi party, to his wife’s disgust, in order to protect his daughter, who has epilepsy.

Douglas is also trying to protect his daughter, not that she wants the help. When Lois returns home from entertaining the troops, Douglas guesses that she’s pregnant before she tells him. He is then surprised to receive a visit from Robina and Jan: Robina wanted to inform Lois that Harry married Kasia.

Inspired by Robina’s courage in revealing Harry’s marriage—he says—Douglas later visits Robina to tell her that Lois is pregnant with Harry’s child. 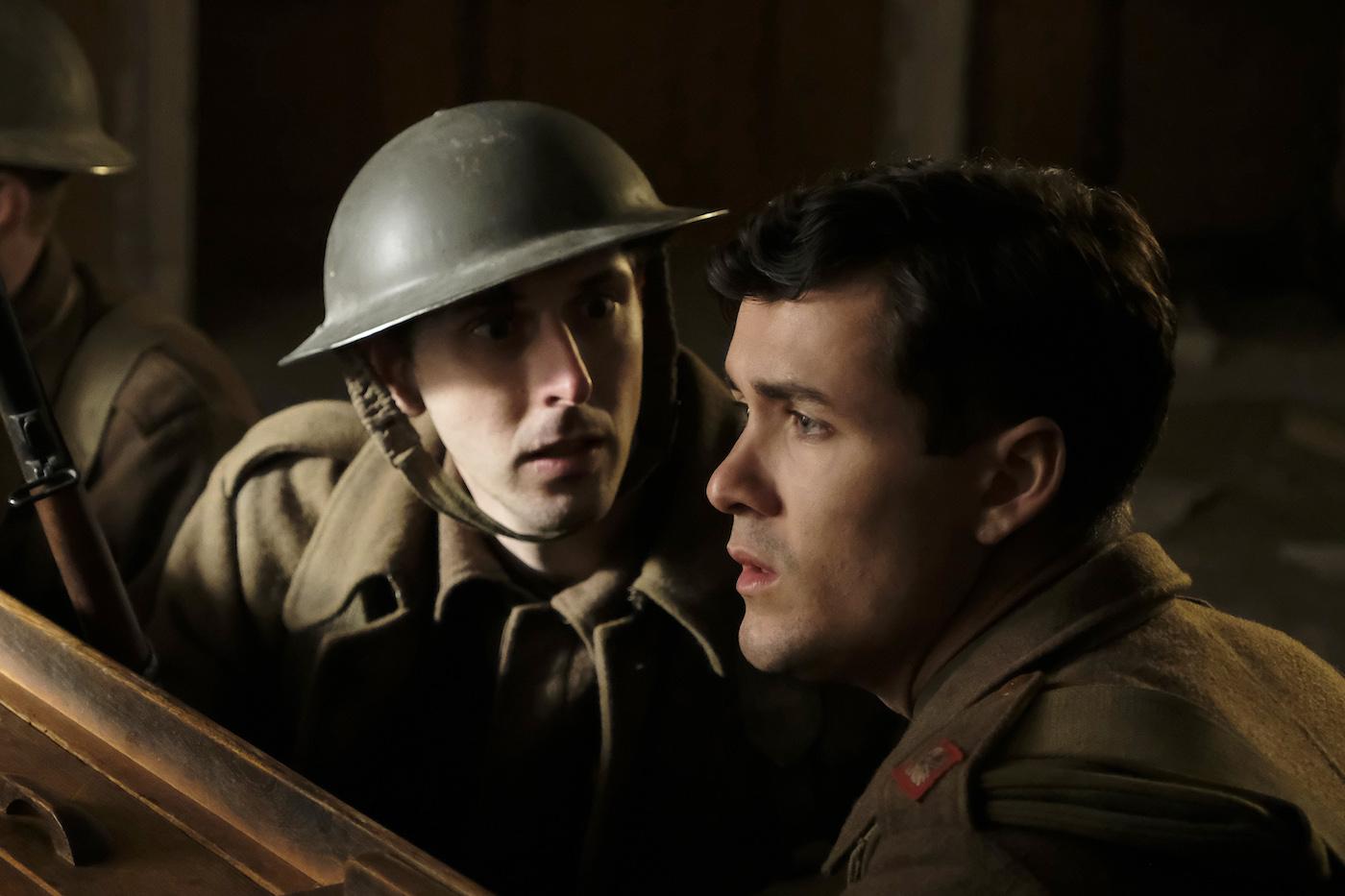 Harry's unit is in Belgium, where combat will test his ability to lead. Photo: Dusan Martincek / Mammoth Screen 2019

Robina later tracks Douglas down and asks if he revealed Lois’s pregnancy in order to instill an obligation in her towards Lois and the coming infant. He replies that he wants Robina to be involved in her grandchild’s life, and that could include financially. Then Lois appears to interrupt the conversation. She tells Robina what she told Harry: she doesn’t need anything from either of them.

Lois is angry with at Douglas for telling Robina about the pregnancy—and for failing to protect her brother. Tom has also returned home for a short leave, but he’s determined not to return to the navy: he’s going to desert. He asks his pacifist father to help him register as a conscientious objector, but Douglas refuses. If the peace movement registered anyone who didn’t want to go back to fighting and was looking for an excuse—and especially if it was Douglas’s son—it would delegitimize the whole movement. Plus, if Tom got caught, he could be hanged or at the very least beaten in prison.

Nancy has been caught: she tried to smuggle a story on the Nazi euthanasia program out of Germany, but it was intercepted. Her official minder chastises her—and then brings up the Rosslers. Nancy tries to bargain for the Rossler daughter’s safety, promising to drop the euthanasia story if Hilda is left alone. An uneasy truce is struck.

Although the Rosslers don’t know that they are explicitly in danger, they have decided that Hilda and her mother will retreat to a lake house, where they might not as easily be found.

Kasia has also discovered that her acts of resistance can have effects on innocent people. In retaliation for the death of the SS officer she killed, the Germans have rounded up some 25 Poles. As the innocents are marched past, one woman falls, makes eye contact with Kasia, and leaves a paper bundle on the ground. Kasia rushes over to pick it up after the soldiers have passed: it is a brooch and an address.

She then follows the soldiers and sees the woman and the other Poles executed. She and her comrade bring the brooch to the address, and the family there weeps—but Kasia and her friend must quickly leave when a German soldier walks by. She decides that twenty-five German soldiers must die, to avenge the Polish innocents.

Gregor and Konrad finally discover hope: a British army unit. They join them as they move to attack German soldiers. Konrad is killed during the combat, leaving Gregor devastated.

There is also combat in the west. When a German tank rolls up to the building Harry and his unit are sheltering in, his second-in-command, Stan, begs Harry for orders. But Harry freezes—and Stan finally orders the unit to fall back.

Later, the unit’s retreat is blocked by a machine gunner. Harry sneaks off to flank the gun while his troops distract it by returning fire. Despite having the upper hand, Harry hesitates and is attacked, losing hold of his gun. He and his foe roll on the floor, throwing punches. Harry manages to grab a brick and hit the man, then finds a knife and stabs him. After Stan appears and the German dies, Harry closes the German’s lifeless eyes.

Harry’s troops finally find safety in a manor on the French-Belgian border. Harry thanks Stan for stepping in when he froze, but Stan pretends that nothing happened. Harry says that his father made a mistake in the last war, and only now does he understand how it could have happened. He feels sorry for his father.

After Harry admits this, gunshots break out. They have to fall back again.