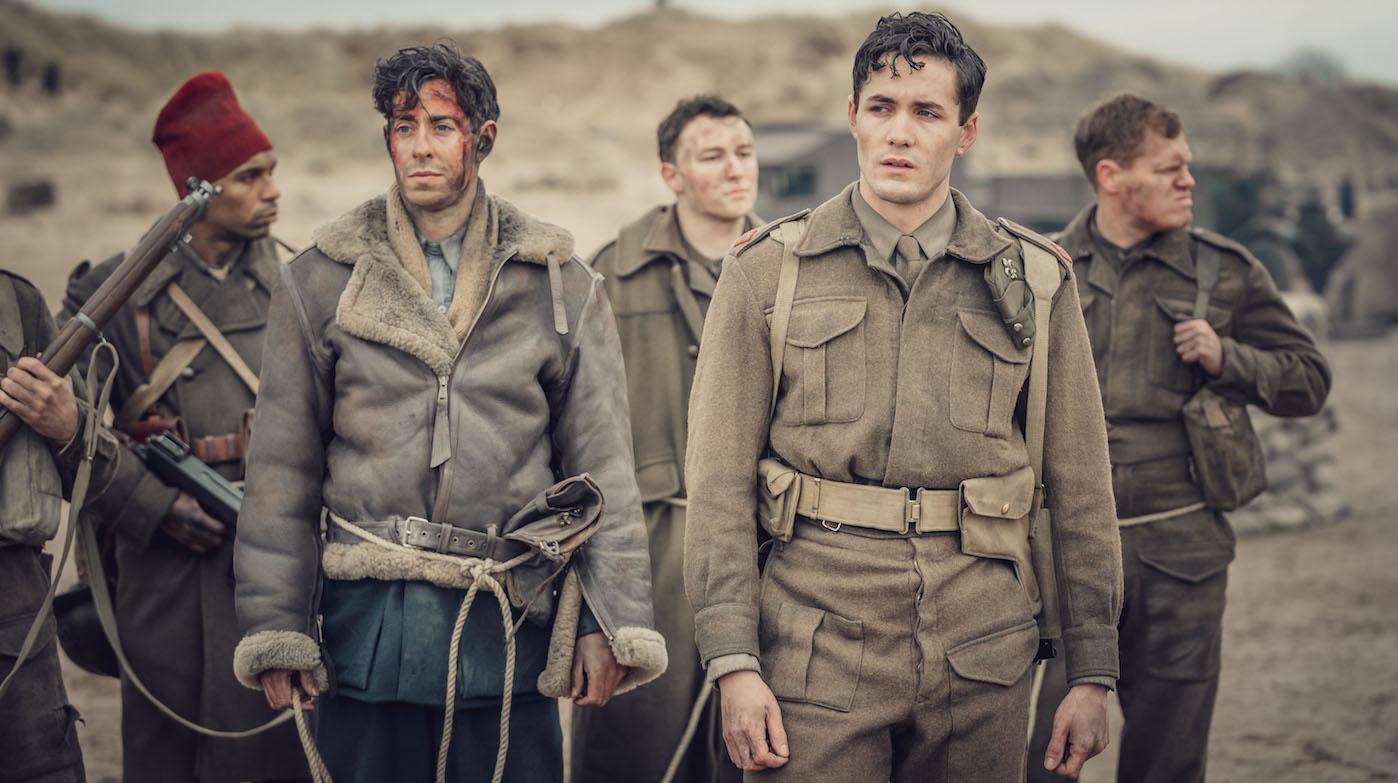 Harry leads a group of shell-shocked troops to the beaches of Dunkirk with the help of two Senegalese soldiers. Photo: Ben Blackall / Mammoth Screen 2019

Belgium has fallen to Germany. Harry’s unit continues to flee, making their way to Dunkirk along with other troops and civilians to attempt to board a ship back to England. German planes occasionally bomb and strafe the caravans of refugees. During one raid, a young girl stands in the open as everyone else dives for shelter. Harry rushes her to safety.

As he and his troops carry on, they bring the girl, who is alone, with them. Soon, they come upon a truck full of British troops so shell-shocked that they’re blabbering nonsense. Their commander, Geoff, is crouched fearfully under the truck, while two Senegalese soldiers fighting with the French army are trying to help the Brits. Stan, Harry’s second-in-command, doesn’t believe in shell-shock and wants to leave them behind, but Harry insists on helping them evacuate. Harry finds a family to take care of the girl while he and his soldiers bring the traumatized men to a field hospital.

Webster is in charge of the hospital; his lover Albert is helping treat the wounded. There’s no room for the shell-shocked men, but Harry at least convinces a nurse to treat Stan, who has been hiding a wound from him. As Harry, his unit, and the shell-shocked troops move on, German planes drop fliers saying to surrender in the face of hopelessness.

Herr Rossler is feeling increasingly hopeless about the fate of his epileptic daughter Hilda. He arrives at his factory to find a worker hanging Nazi flags in honor of the victory in Belgium. He orders her to take them down; they’ll snag in the machines. He then finds a letter concerning Hilda in his office. In a rage, he tears the flags down himself.

For now, the Nazis don’t know where Hilda is. But the same factory worker who hung the flags later threatens Herr Rossler: why is he hiding his daughter at a lake house when she should be “treated”—that is, euthanized—for her condition? No one else is in the factory. Herr Rossler smashes an iron into the woman’s head, killing her. He begs Nancy for aid, and she helps him wrap the body in a Nazi flag and throw it in a lake.

Kasia also continues to lead unsuspecting Germans to their deaths, flirtatiously luring them to an isolated location where her comrade shoots them. When his gun jams, she shoots a soldier herself. Her comrade sometimes worries that they are no better than the Germans, but killing no longer bothers Kasia; this is what they must do.

Harry finally reaches the outskirts of Dunkirk, but there’s a roadblock ahead and the shell-shocked men cannot be trusted to walk the rest of the way when there is bombing going on. Harry sends his own unit ahead to evacuate while he stays with the others and waits for a chance to get them to the beach. Stan insists on staying too, so he, Harry, and the traumatized men bunk down for the night.

Tom is also at Dunkirk, helping evacuate soldiers from the beaches. Gregor has somehow arrived there, but when he pushes ahead of the orderly lines to board a boat, Tom forces him to the back of the line. Albert’s friend Eddie, who happens to be the beau of Lois’s musical partner, has also made his way to the town to flee to England.

He’ll be able to reunite with his girlfriend there; she and Lois are performing for troops at an air base near Manchester. Lois befriends Vernon, a pilot idly playing Chopin on the piano before the performance. He is kind to her and doesn’t judge her for being pregnant and unmarried. After the performance, he compliments her and asks if he can write. She smiles and says yes. 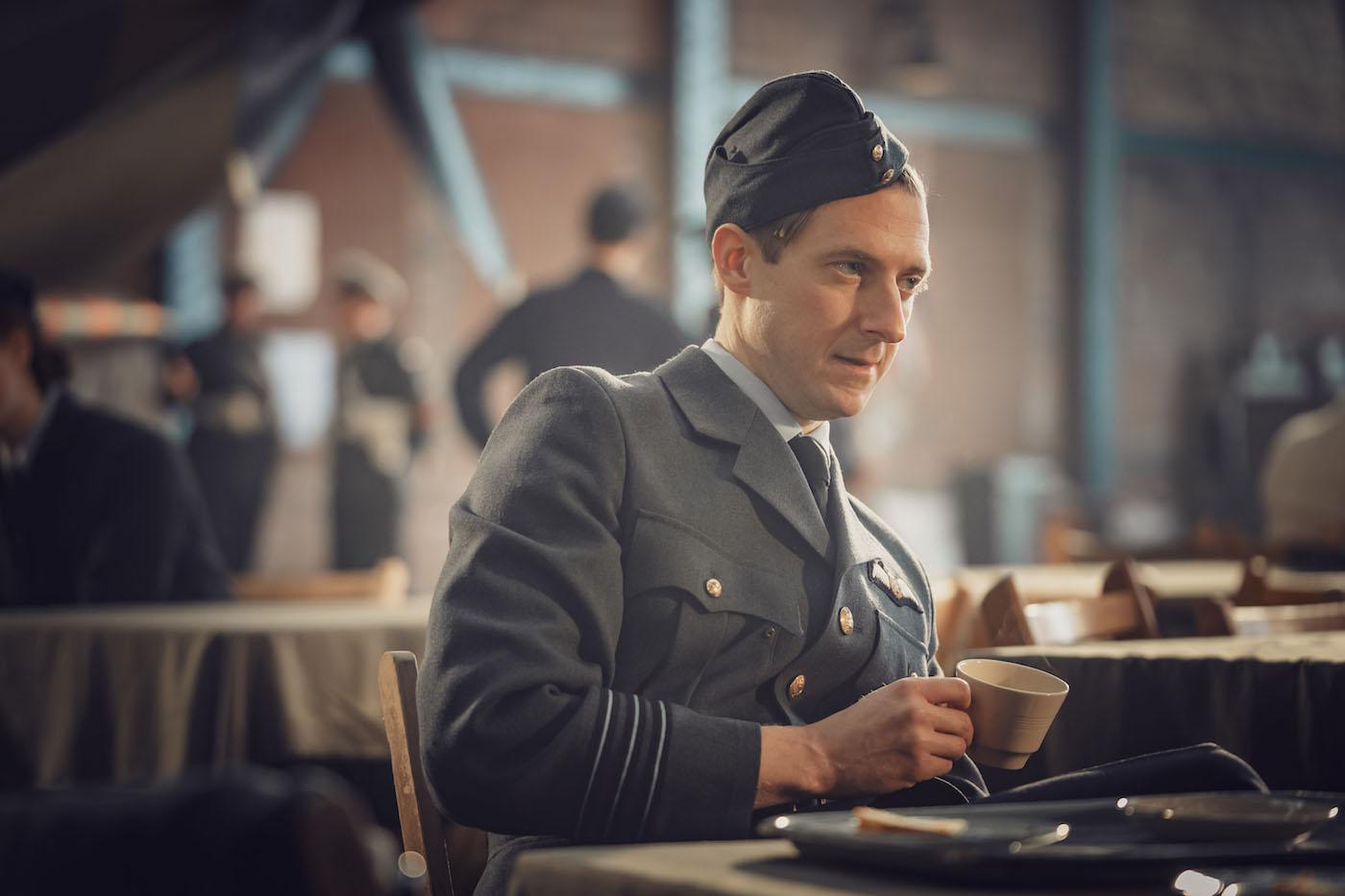 Some pleasant distraction might be good for Lois: at home, her father is suffering due to his own shell shock and uncertainty about Tom’s safety. He visits Robina twice to ask if she has any news of Harry: he’s worried about him, too. The first time, he plays some soccer with Jan and offers to watch the boy if Robina ever needs it; the second, he is breathless with panic, asking simply, “Is he dead?” Robina sends him home to calm down.

Eventually, Douglas has a nervous breakdown, fearing that Tom is dead and blaming himself for refusing to help Tom register as a conscientious objector. He can’t know this, but he’s right: Tom has been hit in an air raid and, presumably, killed.

That same raid forces Harry and the men he is watching into cover, but Geoff, the traumatized officer, instead runs into the open. Harry rushes out and brings him to safety. In the aftermath of the raid, Harry and the men sing “Bye, Bye Blackbird.” Somewhere else in Dunkirk, Eddie plays it on his trumpet, while back in England, Lois sings it with the troops for whom she’s performing.

Harry has forced Stan to leave him by threating to report him for insubordination, and Stan manages to board a ship along with the rest of Harry’s unit. Gregor and Eddie also safely evacuate.

But Harry is still stuck, so he decides to lead the men out on foot with the help of the two Senegalese soldiers, tying everyone together with rope so that they can’t run off at the sound of a bomb. When they reach the boats on the beach, a racist soldier tries to prevent the Senegalese from boarding, but Harry fires his gun in the air when the soldier starts shoving the Senegalese. The brave Senegalese saved a whole group of British troops, he says; they’re coming with. The soldier backs off, and Harry and his companions board a ship to safety.

England will not be safe for long, however. From Berlin, Nancy reports that the Germans are invading France—and they need America’s help. Her German minder quickly cuts off her broadcast.